I have a confession to make. I’m Filipino and I’ve never been to a Jollibee in my life. Now for some of you, that statement probably means nothing to you. But for the 26,000+ Filipinos living in and around Jacksonville (and hopefully reading this review), what you just read was tantamount to blasphemy. 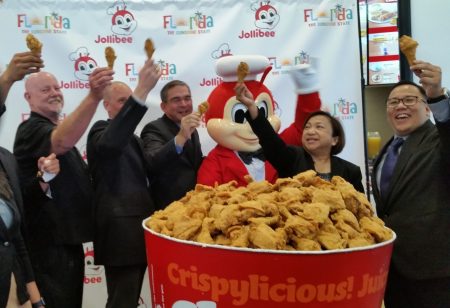 Jollibee (and its conglomeration of other fast food holdings under the name of Jollibee Food Corporation) is Asia’s largest fast food company. It has over 3,000 stores globally and is the #1 fast food company in the Philippines. It’s a Filipino national treasure. My family and friends that were born or lived in the Philippines for any length of time have nothing but fond memories of spending quality together time over a bucket of Chickenjoy and Jolly Spaghetti. 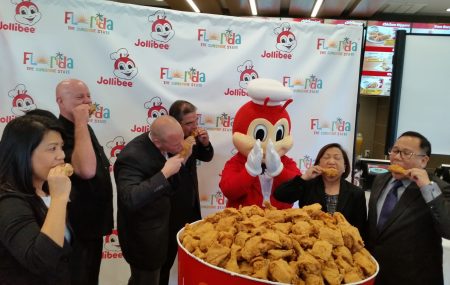 However, I was born in the States. I was raised in America. I haven’t been to the Philippines since I was about three-years-old. I was immersed in Western culture. I did not (nor currently do) speak Tagalog. I’m the only one in my family that needs a United Nations translator when I go home for a family reunion or get-together just to hear my Nanay (great-grandmother) tell me, in Tagalog, that I’ve gained weight. I’m a bad Filipino. My Filipino roommate in college had a nickname for me: Coconut. Brown on the outside, White on the inside. Banana was also used as an acceptable alternative.

So when I was invited to the grand opening festivities of the Southeast’s only Jollibee, I came with no preconceived notions or bias. In speaking to some of the people in the long, winding line during opening weekend, I was a minority in that thinking. Many Filipinos traveled hours just to get a taste of our home country; food they grew up eating, but haven’t had since immigrating to the United States. Some were getting emotional as they told their stories of eating Jollibee as a child and were now just mere feet away from being transported back to their 12-year-old selves in Manila. It was as if today, in this moment, no other food existed. I was looking forward to seeing what it was about Jollibee that could garner such loyalty and remembrance.

Jollibee has two signature menu items: Chickenjoy (fried chicken) and Jolly Spaghetti. They also serve burgers, a Filipino pancit variant called Palabok, steamed rice, as well as mashed potatoes and corn. For dessert, milkshakes called Pearl Coolers made with either Ube or Buko Pandan, Peach Mango fried pies, and Halo Halo. They also serve breakfast items such as longanisa (sweet pork sausage) with steamed rice and eggs, a classic Filipino breakfast. I made two visits over the course of opening weekend to try as many items as I could. I wasn’t able to get any breakfast offerings, as they were not serving the breakfast menu during the grand opening events. 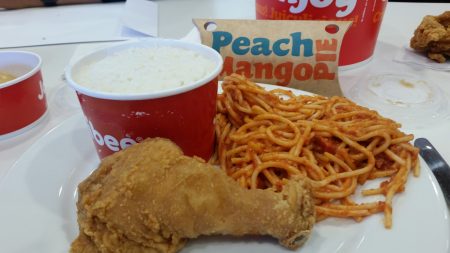 I tried the signature items first. The Chickenjoy is simply fried chicken. For me, nothing’s more annoying than ordering fried chicken and getting the pieces that were cooked a while ago and sitting under a heat lamp all limp and lukewarm. Jollibee’s Chickenjoy was nothing like that at all. It was fried crispy and golden brown, but most importantly, it came out fresh and hot. Steam rose from the meat as I pulled the beautiful crispy skin away. The chicken by itself tasted good, but when dipped in the side of brown gravy, with a spoonful of rice, it all came together in a nice little bite.

I was looking forward to the Jolly Spaghetti. In the Philippines, the spaghetti sauce is a bit on the sweet side. So if you’re used to a traditional Italian-style marinara, you’re in for a shock. I’ve never had Jolly Spaghetti before, but I somewhat grew up with that type of sauce eating spaghetti at my grandmother’s house. Jollibee’s Jolly Spaghetti adds chopped up hot dogs and shredded cheddar cheese. As I ate the Jolly Spaghetti, it did remind me a bit of what I ate as a kid during dinner at grandma’s. It was really cheesy, with long strings of melted cheddar cheese forcing me to do a “Lady and the Tramp” impression with the plate beneath me. For most Westerners, this type of spaghetti can be an acquired taste, but overall, it was tasty.

The next dish is Filipino traditional dish. It’s a version of pancit called Palabok. Palabok is a noodle dish topped with a shrimp sauce, shrimp, pork, pork cracklings, and sliced hard-boiled egg. It’s a salty dish, but it’s meant to be. Jollibee’s version isn’t overly salty. The noodles had a nice, slightly al dente texture. I was a big fan of the pork cracklings. It added a nice crunch and salty bite to the dish. 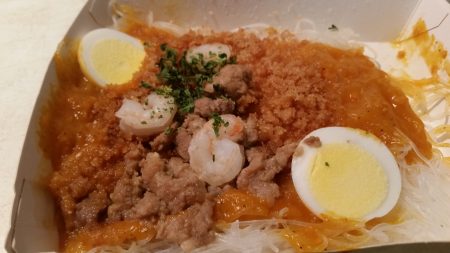 With any other fast food place, Jollibee offers a variety of burgers; the most popular being the Amazing Aloha Burger. It’s basically a bacon cheeseburger with a grilled pineapple ring. Of course, with any mass-produced, fast food burger, speed is a bit more important than presentation. You can tell the burger was put together with some haste. However, it tasted good. I love salty/sweet combinations, so the flavor of the bacon, beef patty, and the pineapple ring hit every salty/sweet button on my taste buds. It’s definitely a step above anything McDonald’s has to offer. 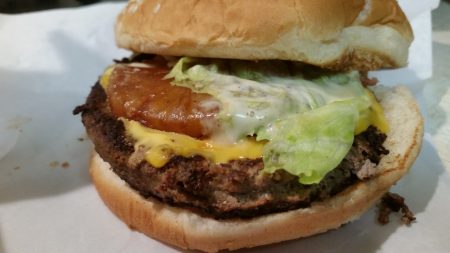 To finish off the meal, I ordered the Peach Mango fried pie for dessert. This pie was fantastic. It was the best fast food style fried pie I’ve ever eaten. I normally don’t put fast food places as “destination” restaurants, but this Peach Mango pie is definitely something I would drive a reasonably long distance for. It was perfectly fried and crispy and the filling was sweet, but not cloyingly so. Some bites had more peach flavor, then the very next bite would taste more of mango. It was ethereal. A definite must order for any Jollibee visit.

Overall, Jollibee is a good alternative to your normal fast food. Could you get a better fried chicken or a burger at other places around town? Maybe, but for those who grew up on Jollibee as a kid in the Philippines, nothing tastes better than nostalgia. 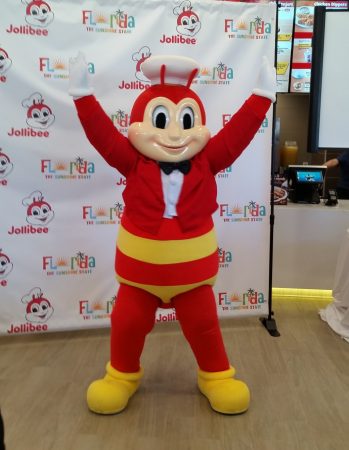 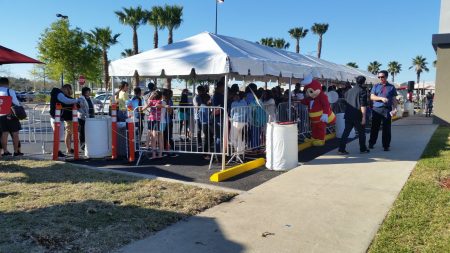