A Jacksonville main stay for the last decade and then some, German Schnitzel Haus recently closed down in order to relocate to the large newer shopping center at the corner of Atlantic Blvd and San Pablo road. If you read our previous review our big knock on German Schnitzel House was the place looked like the 70’s. The booths were old and worn. The place overall just looked as if it desperately needed an update. In German Schnitzel Haus’ new space the restaurant has gotten the update it needed. Gone is the kitschy and somewhat tacky cluttered feel. The new space is bright, clean, and comfortable. From top to bottom the restaurant has now has a classy, upscale feel to it. It’s the kind of space you look forward to dining in. 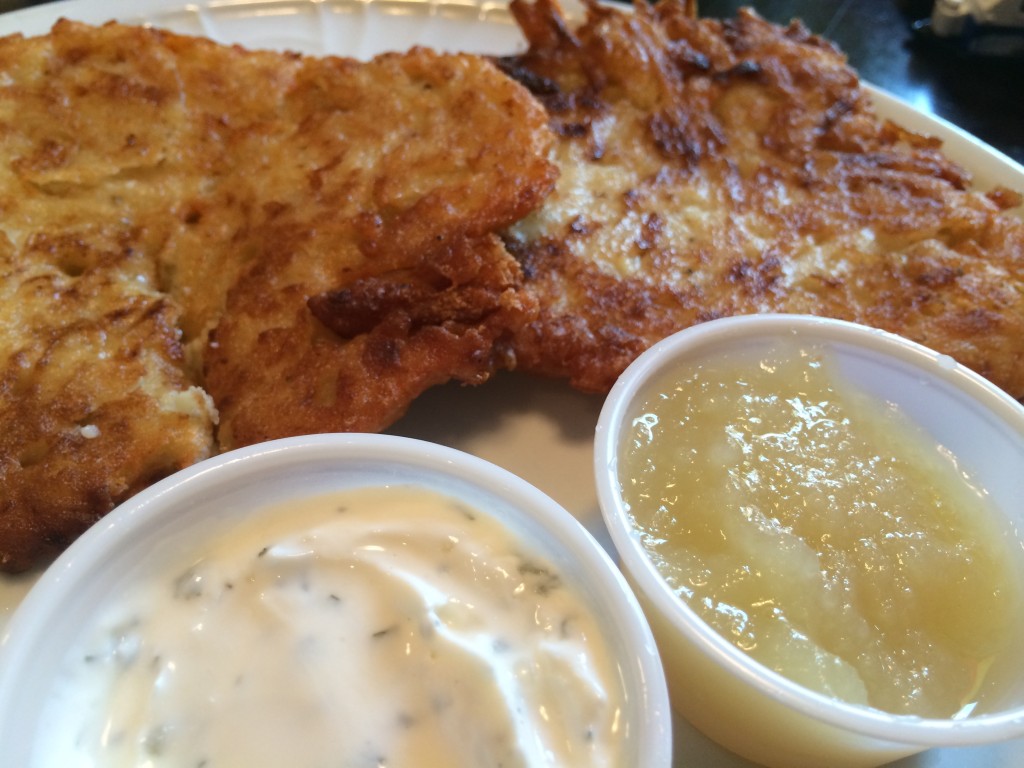 When we came to the restaurant on this visit we intended to get a pizza for the kids and for us to enjoy traditional German cuisine. When we got the menu we found out that German Schnitzel House no longer serves the tasty brick oven pizzas we used to enjoy. That was a disappointment. However, the good news is that with the move German Schnitzel has refocused themselves on serving great authentic German cuisine and it really shows in the product coming out of the kitchen. We started things off with potato pancakes ($6.95). These are essentially the German version of hash browns. They’re very much like hash browns except more moist and potato-ey on the inside. Each dish comes with two sides. One of the sides we started with was the cucumber salad. This is basically thinly sliced cucumbers in a sweet vinegar with a touch of dill. It was nice to start a meal with something a bit different. They were lite and a nice summery sort of food. Across the board at German Schnitzel Haus the portions are generous, and this was no exception with the cucumber salad. We had to think there was more than half of a cucumber in each salad.  Our entree choices for the evening were Frikadelle (large, fluffy meatball) with spatzle, the Schnitzel Haus Platter ($21.99) (with Frikadelle, Rimsroulade, and Jäger Schnitzel ($16.99), with spatzle, bratkartoffeln, and mushroom gravy), and chicken nuggets and French fries for the littlest one. 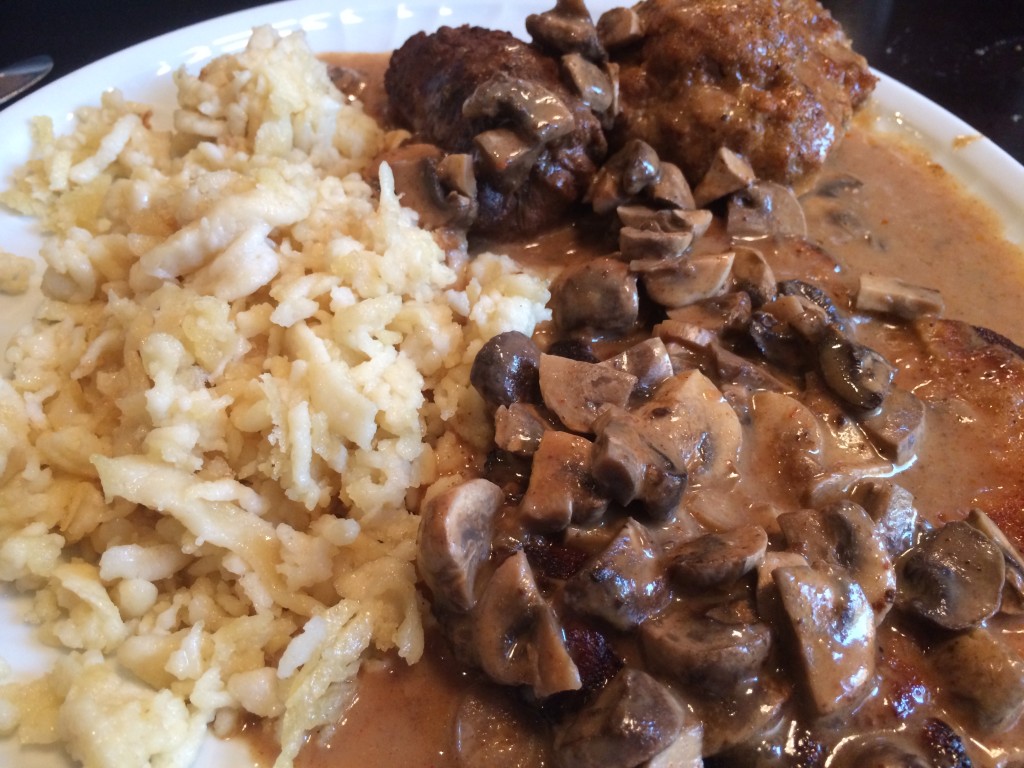 If you are unfamiliar with German food, the Frikadelle is not a bad place to start. You get two meatballs nearly the size of tennis balls with some brown gravy. There are several sides to choose from, but nothing says German food like spatzle, so we say carb it up! Spatzle is basically soft dumplings in the shape of noodles. 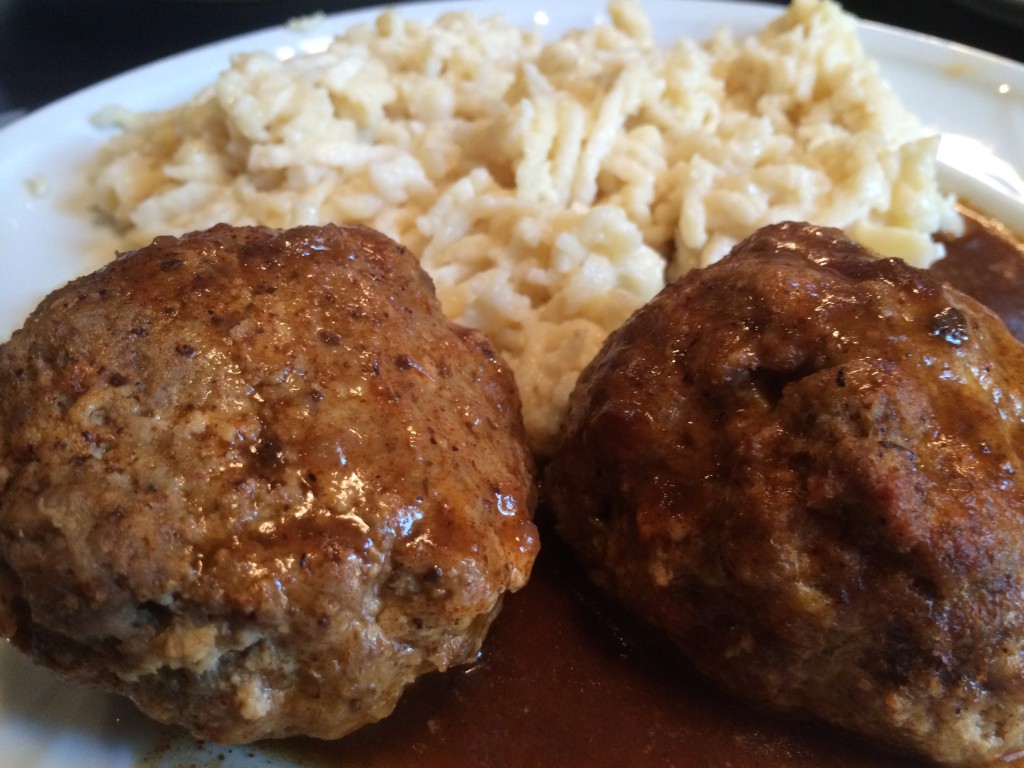 The Schnitzel Haus Platter is the perfect choice if you are new to German food and really want to explore it. The jäger schnitzel is a breaded and sautéed pork cutlet with mushroom gravy. Pork cutlets can be very hit or miss, but this one is a hit. The cutlet is thin and tender with good flavor. The mushroom gravy amplifies everything that is wonderful about the pork chop. One Frikadelle meatball comes on the Schnitzel Haus Platter. Rounding out the platter is Rimsroulade. Rimsroulade is a thin slice of beef rolled up and stuffed with onions, pickle, bacon, and spices. It sounds slightly strange, but surprisingly the flavors are not at all overpowering. In fact, if we didn’t know there was pickle in the Rimsroulade we probably wouldn’t have realized it was there. After all of these hundreds of reviews we’ve gotten pretty good at identifying specific flavors. So the fact that the onions, pickle, and bacon were so subtle in the Rimsroulade is a testament to the chef and the flavors working well together, however surprising. Along with the Schnitzel Haus Platter we had spatzle (yum!) and bratkartoffeln. The bratkartoffeln is fried potatoes with bacon. They’re not diner style; the potatoes are not at all crispy and the bacon is in chunks. It’s sort of the German version of home fries. Of all of the menu items we tried, the bratkartoffeln is what we ate the least. It wasn’t bad. It just didn’t hold a candle to the spatzle. 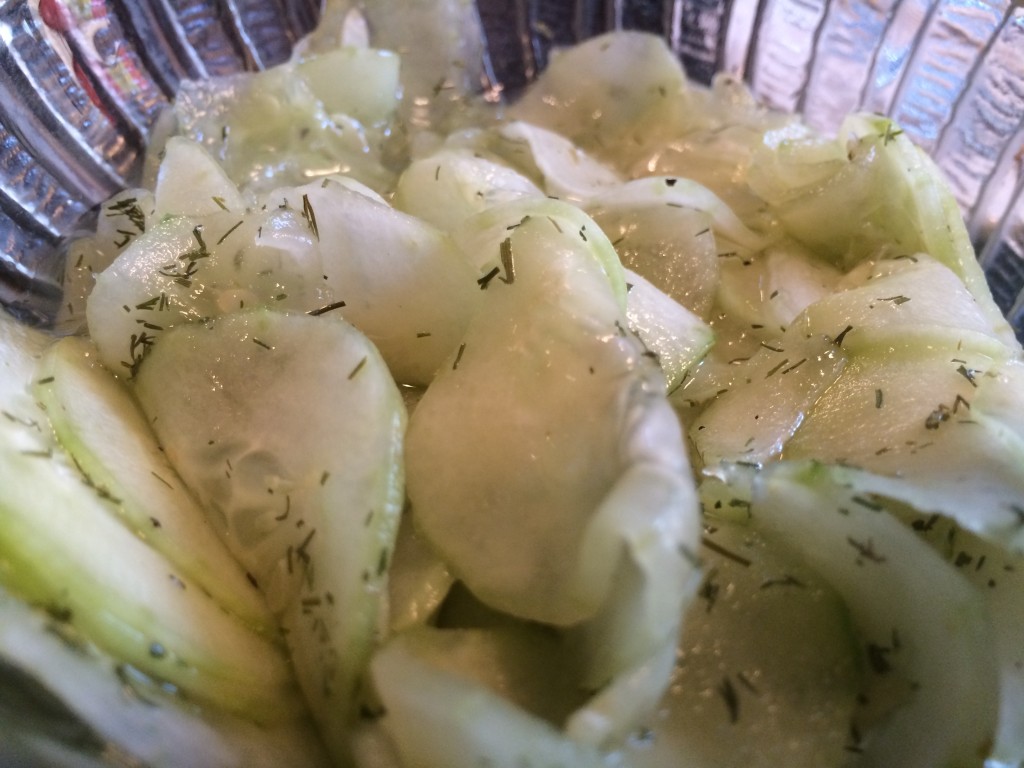 Last up for us to discuss is the kids chicken nuggets and fries from the kid’s menu. Although our little one isn’t adventurous enough to try German foods, we were delighted to see some the kids menu included some traditional German options. Usually kids menu items aren’t worth mentioning, but these were not cafeteria level nuggets. They were small chicken fingers and there was a generous amount of them along with the fries. They obviously were not made in house, but they were baked instead of fried and a better quality and portion than expected. Which means a certain little person is having the rest of their nuggets and fries for lunch tomorrow. 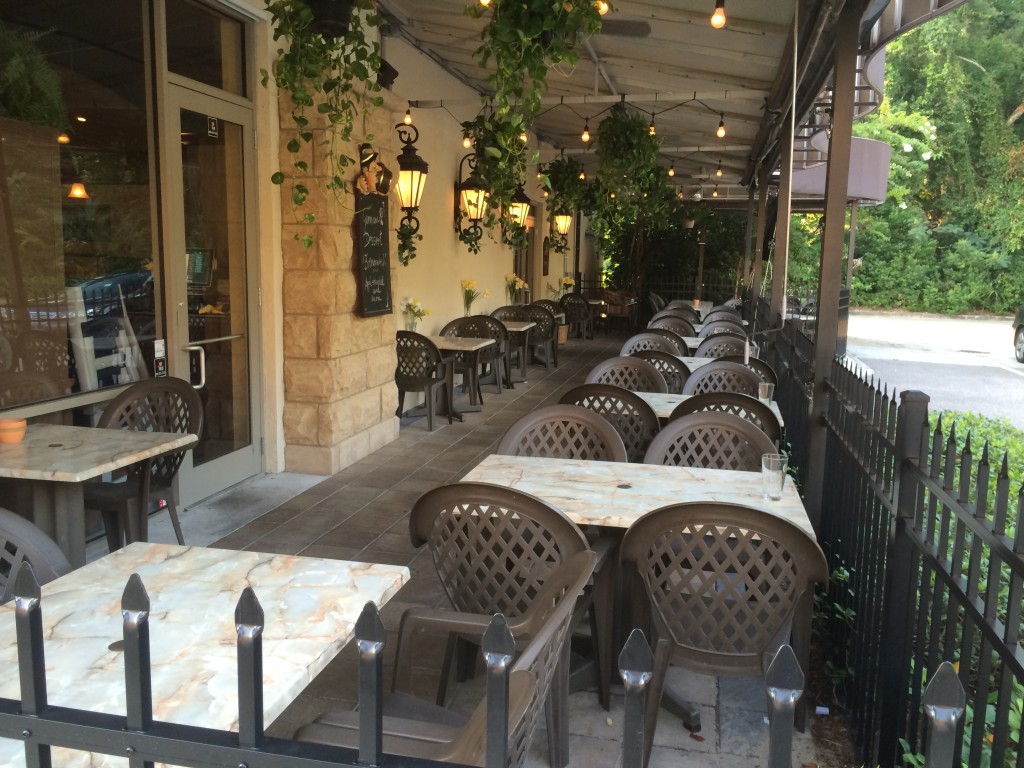 Our waitress was knowledgable and attentive. Our entire experience was pleasant and there were no issues at all as far as service. One great thing about German Schnitzel Haus is the knowledgable and helpful waitstaff. There are good descriptions on the menu, but the waitstaff is accustomed to explaining many menu items and helping guests decipher what it is they’d like. I appreciate the manner they do it in as well, almost as an ambassador to the restaurant and food, rather than acting as if it’s a chore. 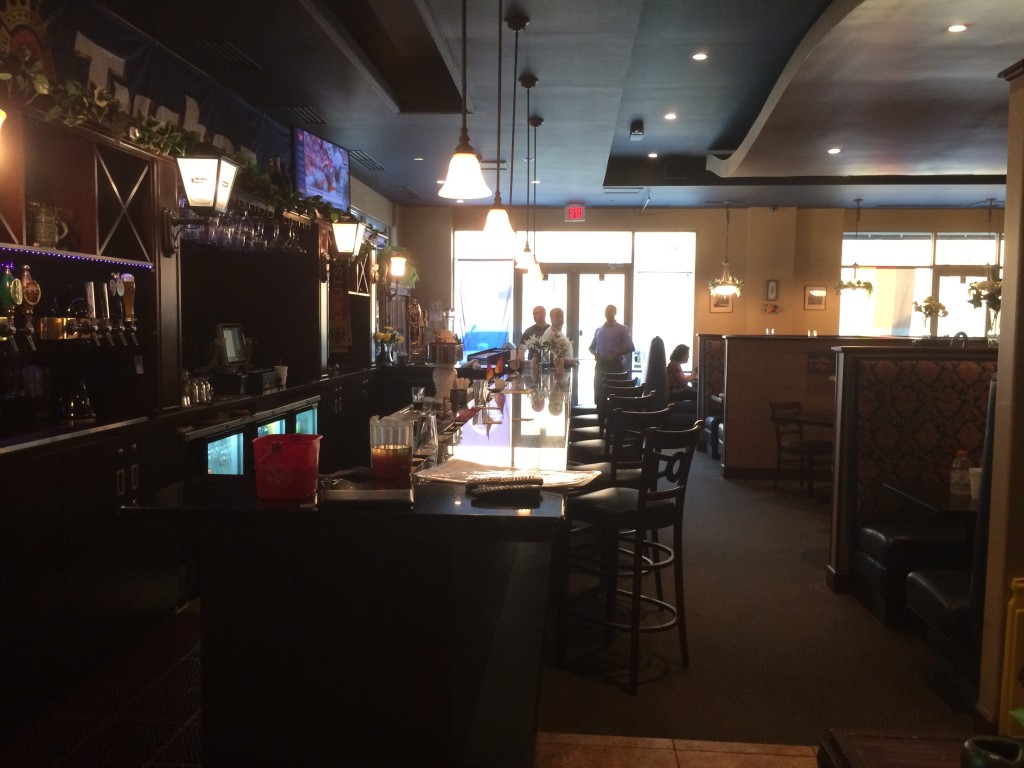 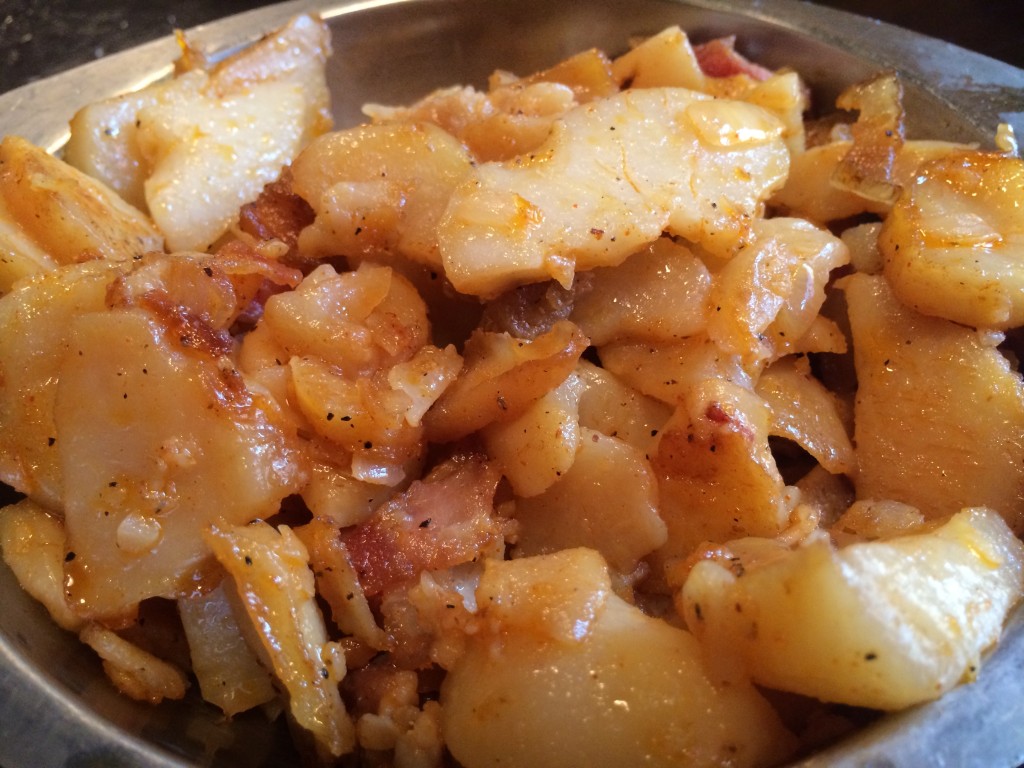 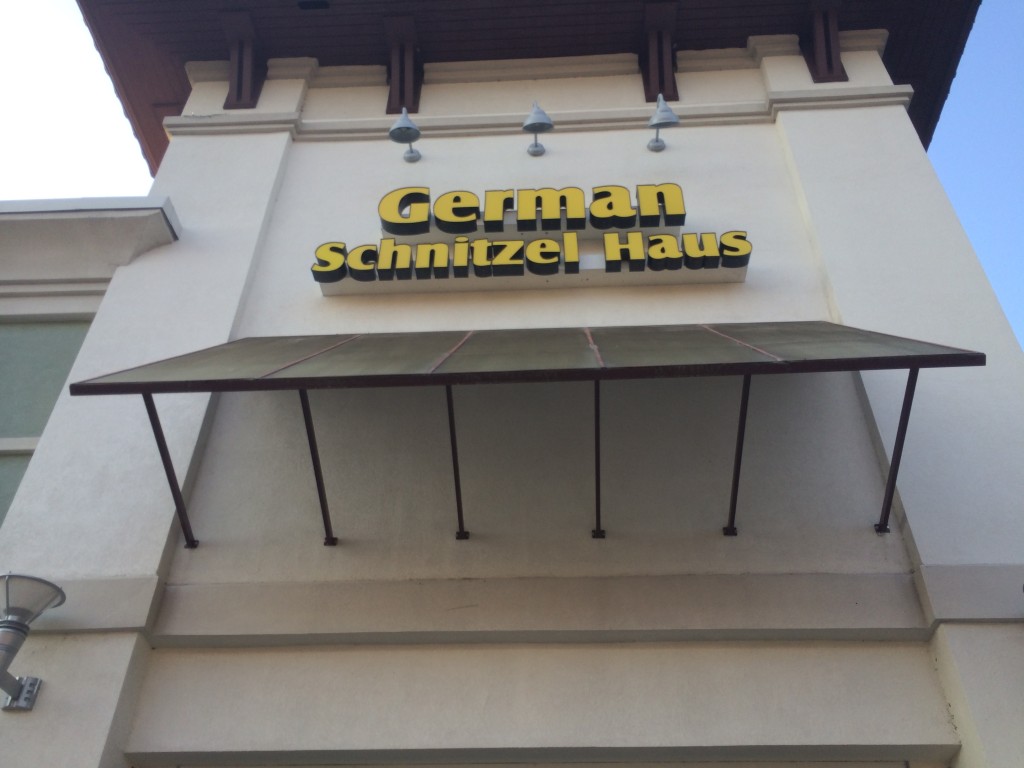