We haven’t been out to Perards in over a year.  In that time they’ve changed chefs, so the food and menu have probably changed quite a bit as well.

This week we got the chance to head on over to Jacksonville’s Westside and check out Perard’s Italian restaurant. In business for the last 8 years or so, Perard’s has become a true neighborhood favorite on the Westside. When you can walk into a place at 9pm on a Wednesday night and the place is packed you know a restaurant really is popular. That was the case as we walked in to Perard’s. I was amazed at how many folks were dining in late on a week night during the slowest season of the year for the restaurant industry. When we got done done trying the food we understood why Perard’s is so popular. 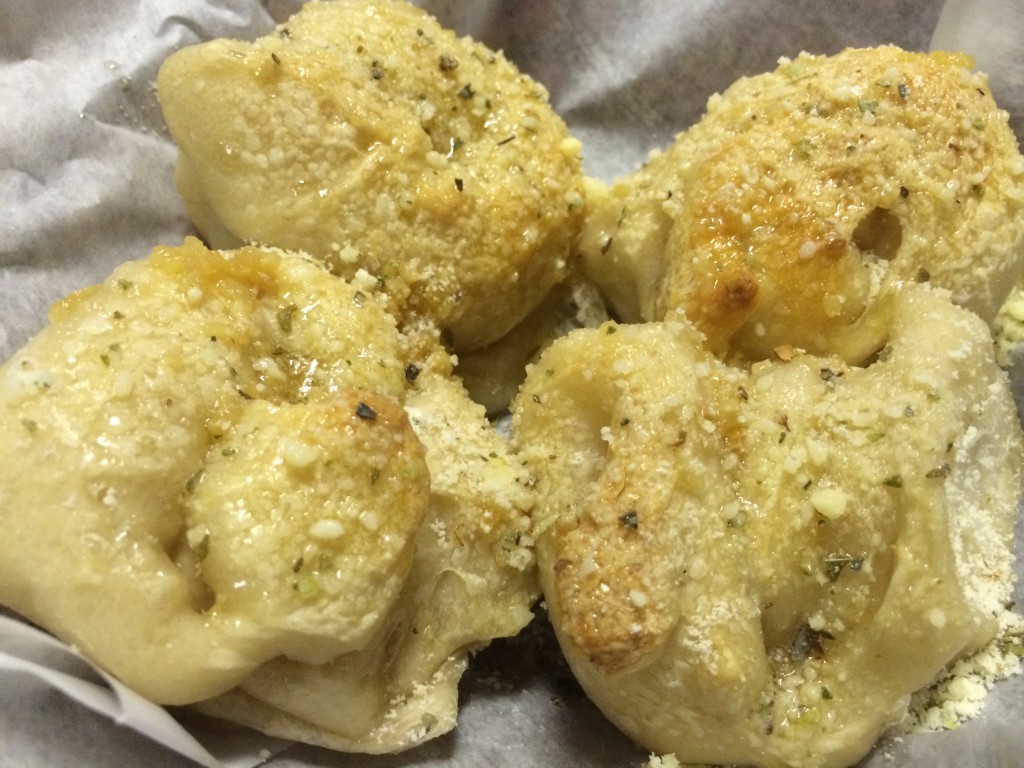 As we walked in we were promptly greeted and shown to our table. After our drink order was taken the manager Lisa came over to our table, introduced herself, and shared with us what Perard’s is all about. Perard’s is a family run business owned by Carmel and Hugh Perera. We wondered why the name Perard’s since the family name is Perera. The name Perard’s is actually a blending of The family name and Carmel’s maiden name, Ward. On this visit we were actually invited out by the restaurant. Since they knew we we coming we got to learn an awful lot about the restaurant while we were there. 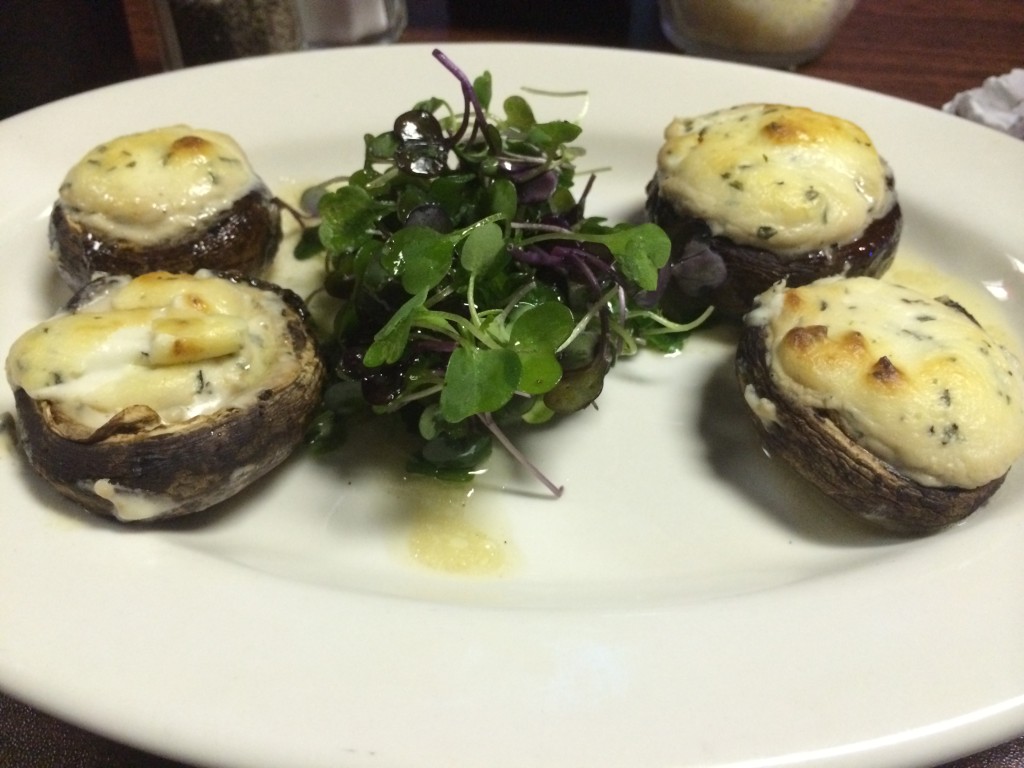 Perard’s dough is made fresh every day. They use high gluten flour which is one of the key ingredients that makes their pizza authentic New York style pizza. We learned Perrard’s current chef Chef Steve Thurston is originally from New York. That’s always a plus in a restaurant making New York style pizza. In our initial chat with Steve’s wife Lisa who manages Perard’s, we also learned Steve has worked in a who’s who of delicious upscale Jacksonville restaurants including Marker 32, North beach fish camp, and The Good Food Company. This definitely got us excited to try the deliciousness on offer on our visit.

Before we get into the food I want to discuss the restaurant itself. From the outside it looks like your typical affordable family style Italian restaurant. The tables and the decorations also fit this description. The thing we really enjoyed about the space though was the size and quality of the projection screens Perard’s has across the wall and the nice comfortable bar area in the back of the restaurant. The open pizza kitchen doesn’t hurt either. The bar tender had a great repoire with customers and everyone seemed like they were having a great time. The dining area in Perard’s struck me as a great place to watch a game. If I lived on the Westside I’m fairly sure it would become my new spot on Sunday’s to camp out and catch the nfl. One of the walls in the dining room has two big fantastic quality projection screens that you can camp out at and catch football or any other sport you’d like to enjoy. 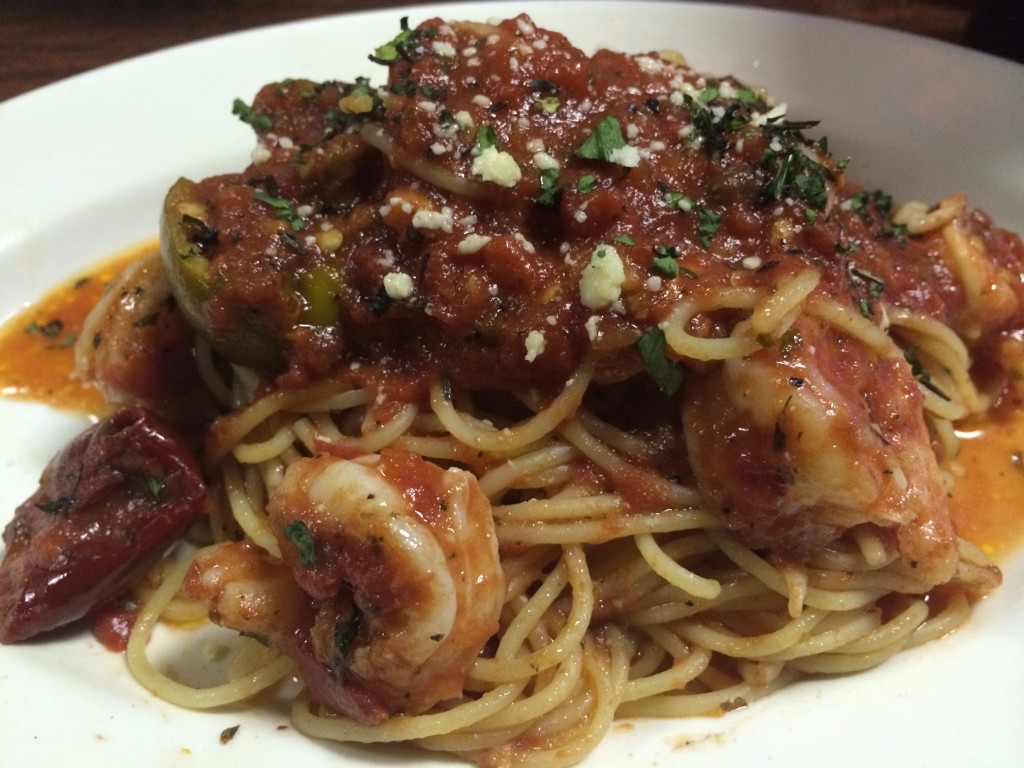 Now let’s talk dinner! To start things off we tried the Boursin mushrooms-mushroom caps filled with a blend of boursin cheese and house made ranch dressing. These were pretty stellar. The mushrooms were juicy and the Boursin plus ranch combo was awesome. Next up was chef Steve’s signature Fra Diavolo. Fra Diavolo in Italian mean’s brother devil. We could tell why! We asked for the toned down version of the Fra Diavolo and it as still pretty darn toasty. This dish was very spicy without losing depth of flavor. We enjoyed it very much and we think you will too. This is definitely one of the stars at Perard’s. If you’re a fan of spicy foods you’ll love it. If you’re not into spicy foods you might want to skip it. Next up was the Boss Hog pizza- pulled pork, blackberry BBQ sauce made in house, Topped with banana peppers, Mozzarella shredded in house never repackaged, house made ranch drizzled across the top. This pizza was really different from most we’ve had before. Normally when you eat a pizza you taste each topping individually plus the mozzarella or sometimes the cheese and grease overshadows the toppings a bit. Rarely do you find that each topping perfectly complements each other topping to create layers of flavor for your enjoyment. On The Boss Hog Pizza this is exactly what happened. The Blackberry BBQ sauce perfectly paired matched the subtle orange flavor in the pulled pork. The banana peppers added balance to the flavors and the cheese and ranch gave the pizza more of the taste we traditionally expect from pizza. I could pass on the ranch though. I like ranch but I’m not a big fan of the trend of dumping ranch on everything. Next time I’ll order the pizza without the ranch. It’s also worth noting the crust was really good. 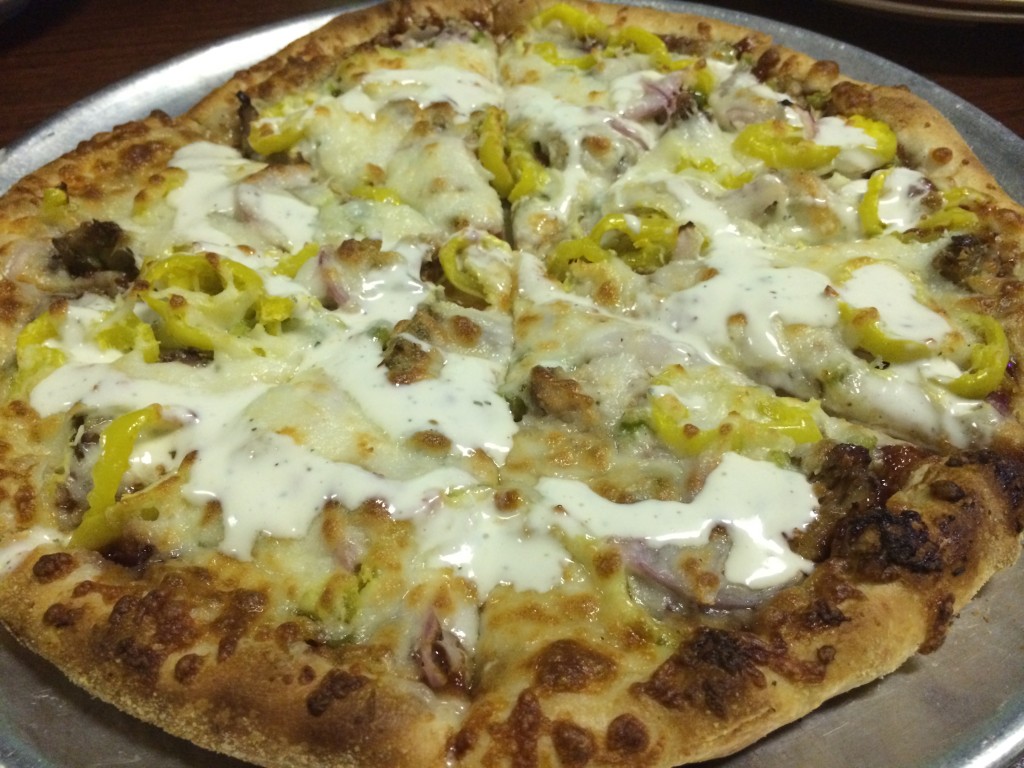 The next dish we tried was the Creamy garlic risotto topped with slow cooked pulled pork,bacon jam with caramelized onions, and house made chips. This dish had a decent amount of garlic flavor without being overpowering like garlic can sometimes be. The pulled pork is smoked 16 to 18 hours overnight and marinated overnight in orange juice. It was to die for! After 100+ restaurants in Jax I’d never have believed it if you told me I’d find my favorite pulled pork at an Italian place. Amazingly I did! The pulled pork had a wonderful pork flavor with fantastic undertones of orange that fell in love with. It was awesome on the pizza and even better on top of the risotto. You’ve gotta try this stuff! Wow! It’s unlike anything else in Jaxand reminds me of the sort of creation that could win a food network show. Last but not least we finished the meal off with a cannoli for dessert. It was really, really good. This one came with blackberries and had chocolate chips mixed in throughout the cream filling. The blackberries we a nice complement adding some tart to make the sweetness of the cream which we appreciated. The chocolate chips blended throughout was a nice upgrade of the standard presentation of putting chocolate chips on each end. The service we got at Perard’s was top notch. There was always someone around when we needed anything. When they know you’re coming that tends to happen. I will say everyone we observed around us got great service as well and we could see most of the people dining that evening from our table in the middle of the dining room. 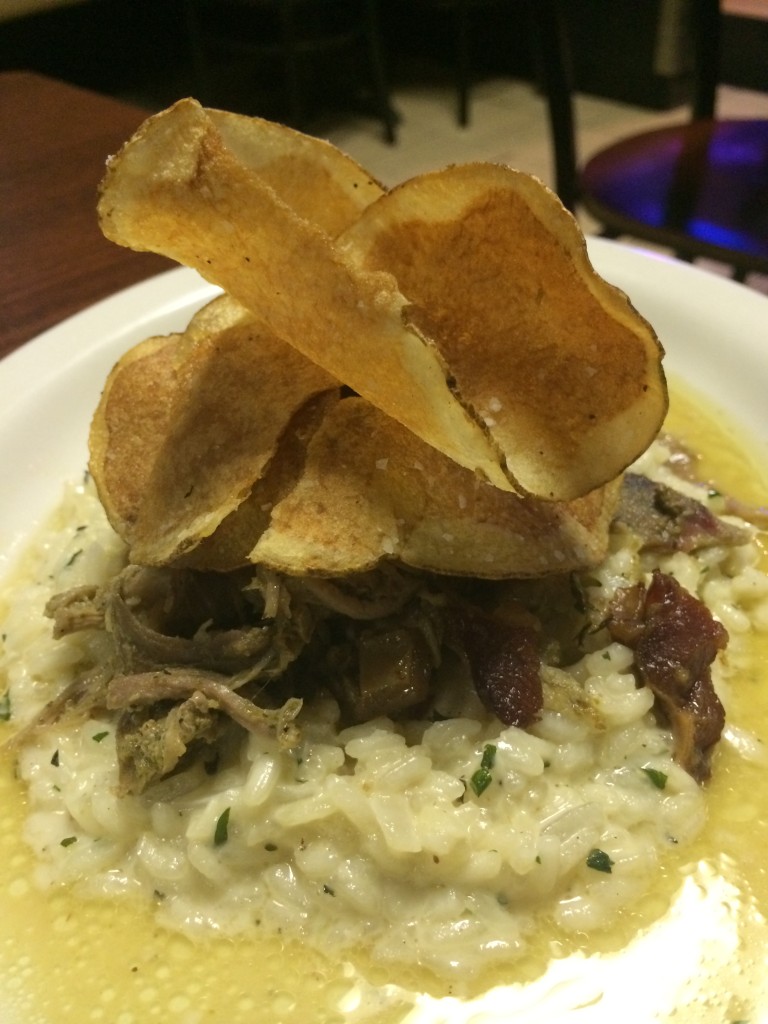 I’d be remiss if I didn’t take time to point out the how affordable the pricing is at Perard’s. Every dish I saw on their menu was at least a couple dollars cheaper than the pricing you’ll find at a similar quality restaurant in any other part of town. Most of the dishes we tried on this visit are not on the current menu so we weren’t able to include pricing. They’ve got a new menu coming out shortly and most are expected to be on it. If you go to Perard’s and would like one of the dishes from the review that’s not on their menu just ask. I think in most cases they’ll make it for you.

Our visit to Perard’s was flat out awesome. When we got there the manager shared with us that she believed Perard’s was the gem of the Westside. Perard’s made believers out of us. I wouldn’t have believed you if you told me a place this good existed on the Westside. If you live anywhere remotely close to Chafee road and you haven’t visited Perard’s you need to get in the car and head over there right now. It’s just that good. 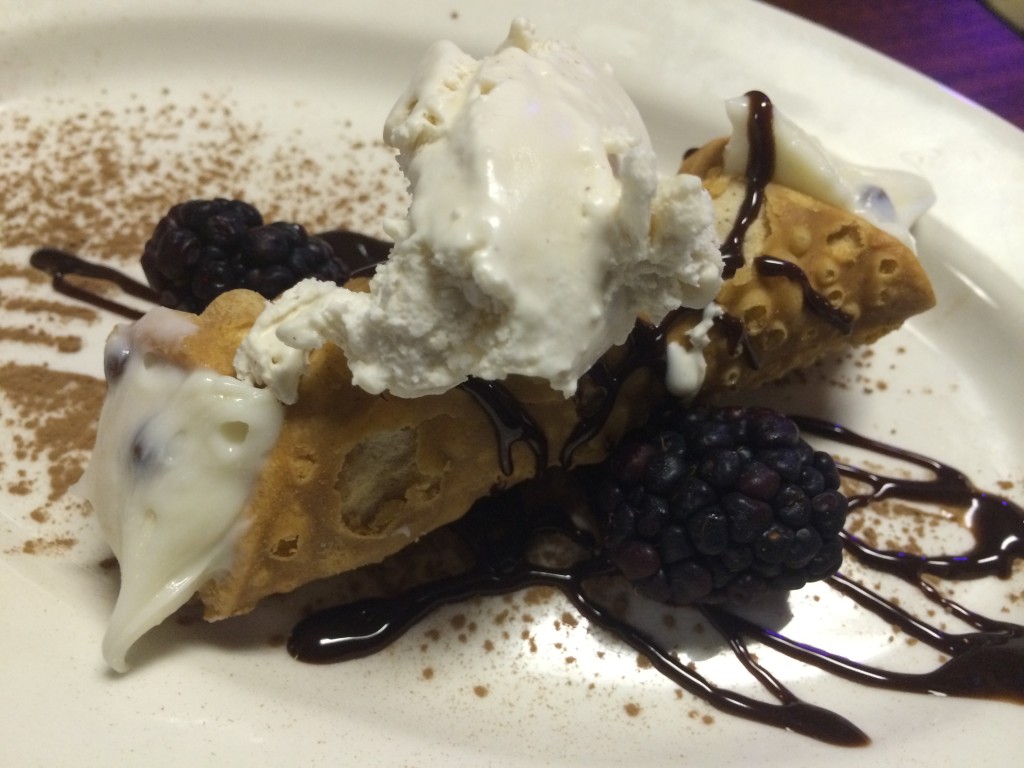