Today, I decided to stop by Gastronome, a really neat place that I pass by nearly every day.  But I never even knew it was there until recently.  And even then, I was a little hesitant to stop in and check it out.  I just wasn’t sure what to expect.  Nestled in a pretty non-descript little plaza at the intersection of Atlantic Boulevard and St John’s Bluff, Gastronome is an adorable cafe and market that feels like it was taken straight out of Eastern Europe and plopped down right in the middle of Jacksonville.  We walked in and immediately felt like we had stepped into a quaint European cafe.  Everything from the sun-drenched seating area by the windows, to their chalkboard signage, to the black and white checkered linoleum tile helped to pull together the perfect cafe feel.  They even serve their cafe items on real, white china plates.  Very nice.  They have about four tables plus a seating area with a few cushy armchairs.  Perfect for sitting and enjoying coffee with a friend.  Even though this was my first trip to Gastronome, it felt very inviting and friendly. 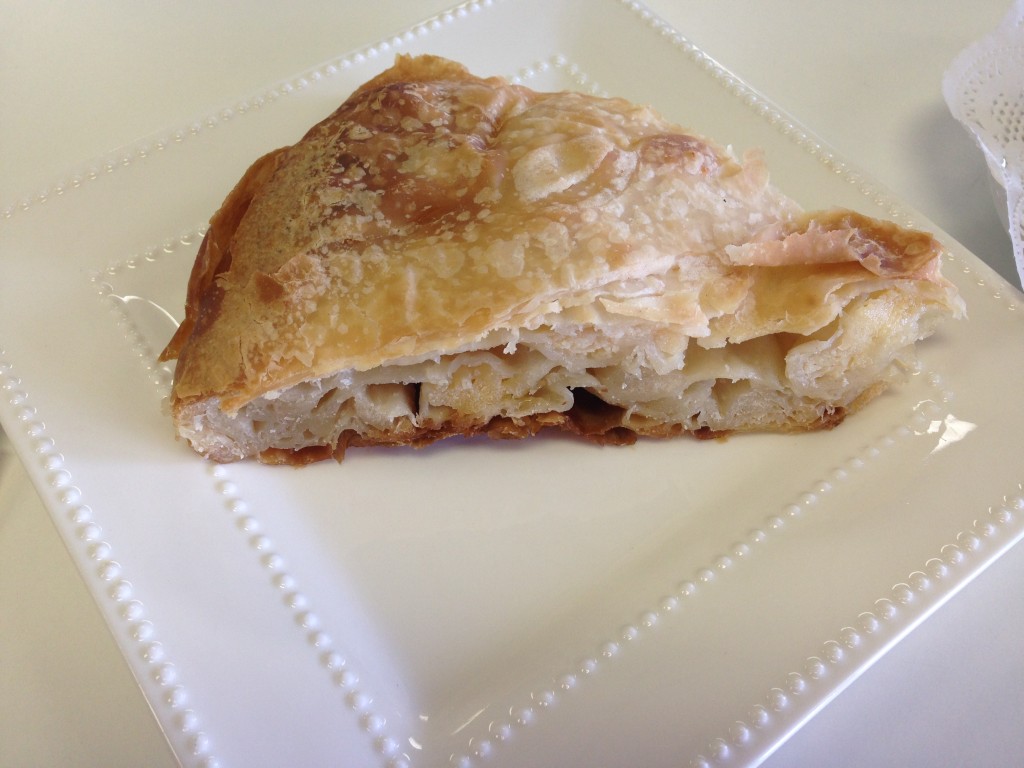 The staff was also very friendly.  We seemed to have caught them on a busy restocking day, because there were several employees working on refilling shelves and they seemed to be a little more focused on the grocery side of things than on the cafe counter.  But despite all the busy-ness, they were still quick to greet us when we walked in and to ask if we had questions about anything.  Unfortunately, restocking meant that there were also boxes everywhere, but I would venture to guess that that usually isn’t the case…at least I hope not.  Seeing as how I had a child in a stroller it was a little tricky to maneuver around some of the boxes and restocking clutter. 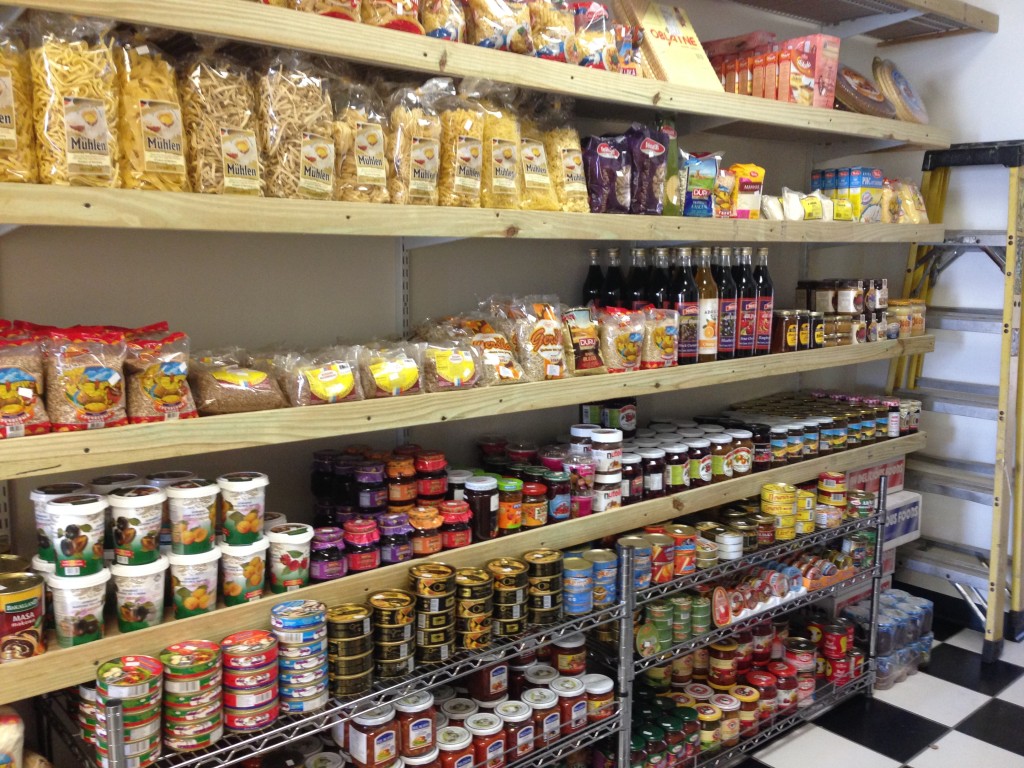 As far as the market part goes, Gastronome sells everything from pasta, jams and jellies, European meats and cheeses to quirky foreign candies, sodas, and coffee beans.  What a great selection of Eastern European goodies.  There are lots of Russian, Bosnian, Ukrainian, and Bulgarian groceries to choose from.  They even have a freezer section with blintzes, dumplings, and any kind of peirogies you could want.  I was in carb heaven!  I spent a while just wandering around, looking at all their grocery offerings (and trying to decipher what everything was, seeing that most of the packaging is not in English).  I could have spent even longer exploring all their beautifully displayed grocery shelves, but I really wanted to try some of their cafe goodies. Gastronome has a modest cafe menu, displayed in handwritten lettering on a huge floor-to-ceiling menu on the wall.  They also have a pretty extensive coffee menu, with options like espresso, cappuccino, cafe mocha, and caramel mochiatto.  All are very reasonably priced, ranging from about $2.00 to just over $3.00.  You can also customize your coffee drink with extras like syrup shots and whipped cream.  Their savory dishes include Cevapi, Gyros, Dumplings, and Burek.  Their dessert case is fully-stocked with all sorts of luscious treats.  And even more cookies and meringues were displayed on top in pretty glass jars.  It was pretty tough to choose from all the sweets…everything looked so good.  Eventually, I decided to try a Cheese Burek and two different sweet pastries. 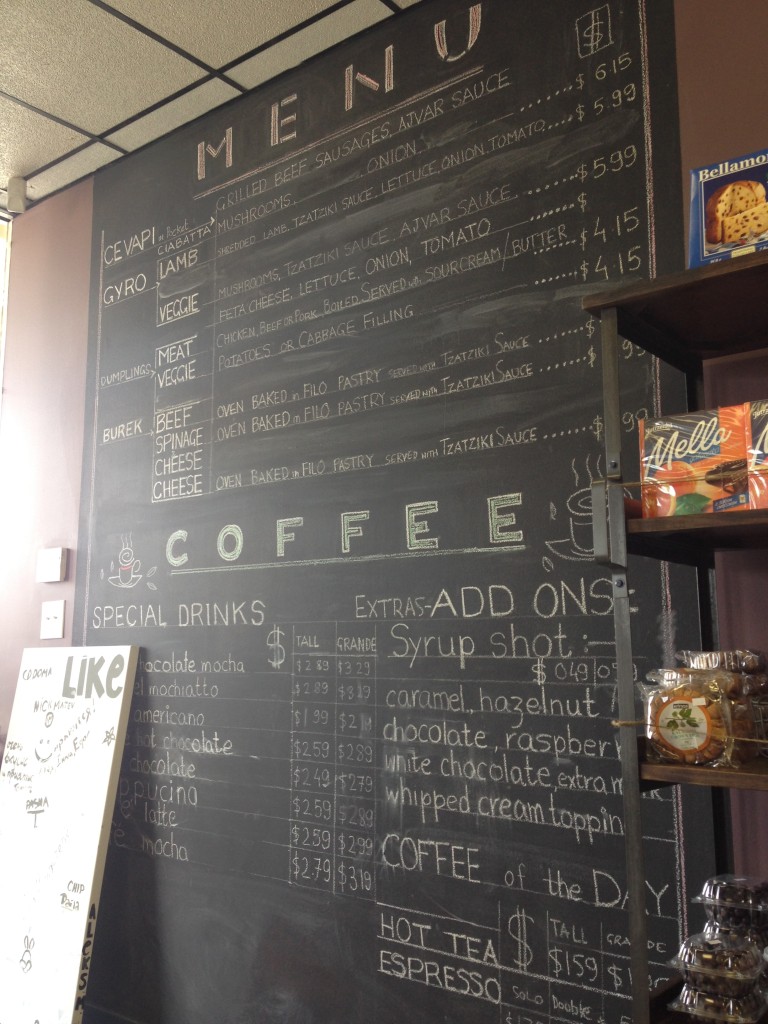 We paid for our pastries and groceries at the counter and grabbed a seat at one of their cute cafe tables.  I had originally wanted to try the Spinach Burek, but was told that they were out of those.  Bummer…I’m a pretty big spinach fan.  But the Cheese Burek did not disappoint.  A burek is a Turkish pastry made from phyllo dough and different fillings such as cheese, meat, or vegetables.  This one was light and flaky and filled with yummy melty cheese.  Really, how can you go wrong with that combination.  And for the price of only $2.99, I felt like I was getting a real steal.  I was a little disappointed when I glanced back up to the menu and noticed that my burek was supposed to come with a tzatziki sauce.  That would have been a nice touch with my savory pastry.  I am however, happy to report that the sweet pastries that we tried were absolutely to die for.  The first sweet treat that we tried was very similar to baklava and cost only $.99.  Instead of typical baklava with flat layers of phyllo dough, honey, and nuts, this particular pastry had more straw-like phyllo pieces wrapped around a nutty, sweet, slightly spiced center.  It was flaky and sweet, but not overly sweet.  Our favorite treat was a cream-filled peach cookie creation that was delicious, adorable, and just plain fun.  The cookie was shaped like a peach and covered in sparkling sugar.  When we pulled the two halves apart, we found a creamy peachy filling inside.  Oh my goodness.  At only $1.49 a piece, I should have gotten a couple dozen of these to take home with me.  Just for me…not to share.  These little peach cookies, typically called pesche dolci (Italian for “sweet peach”) would be perfect with a hot cafe mocha, enjoyed while sitting in a comfy armchair by a sunny window in a cafe somewhere in Europe.  Or in the middle of Jacksonville, Florida.  Yep…who would’ve thought that such a quaint, eclectic spot was even there?  But thankfully, it is and I definitely see more visits to Gastronome in my future. 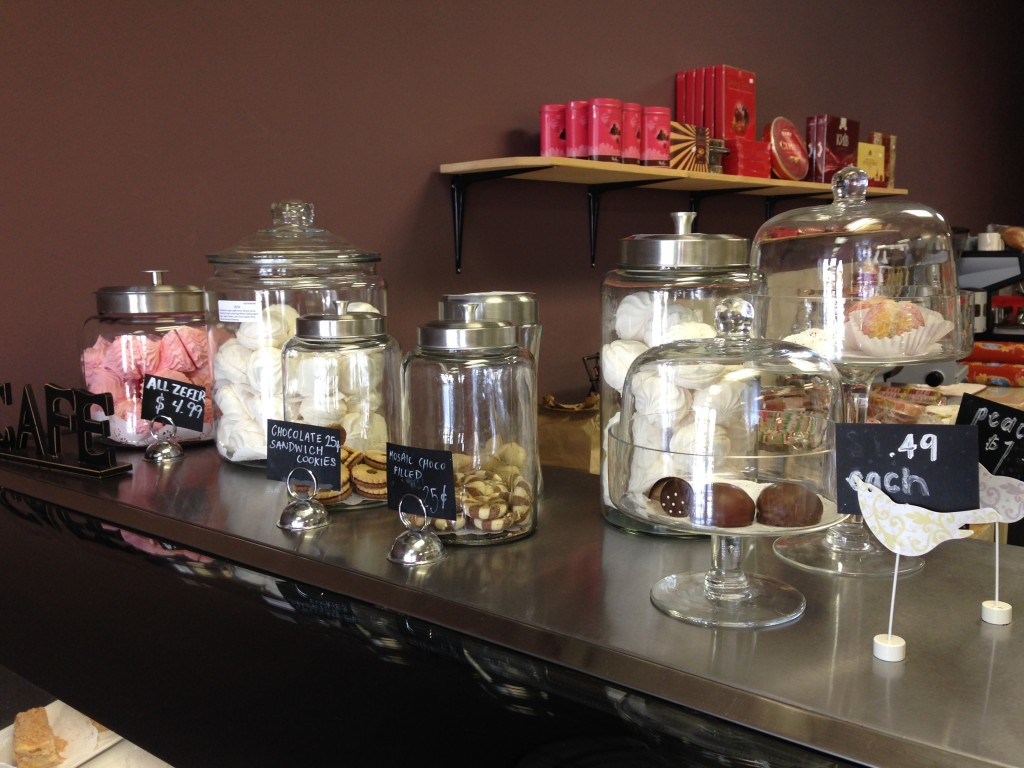 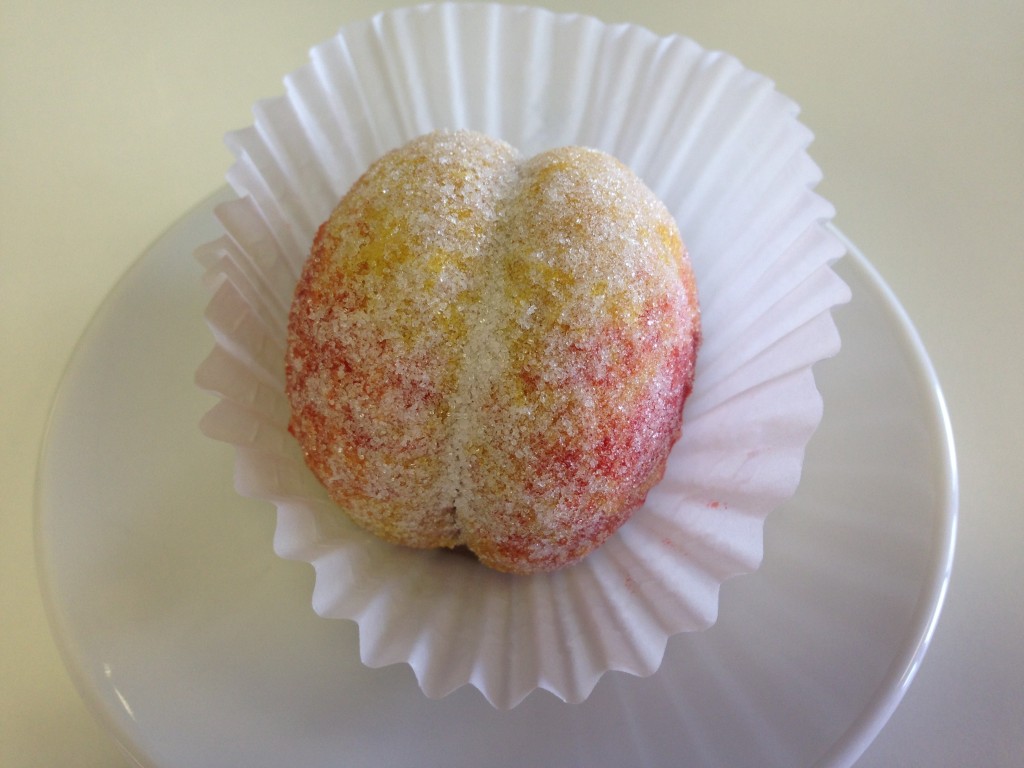 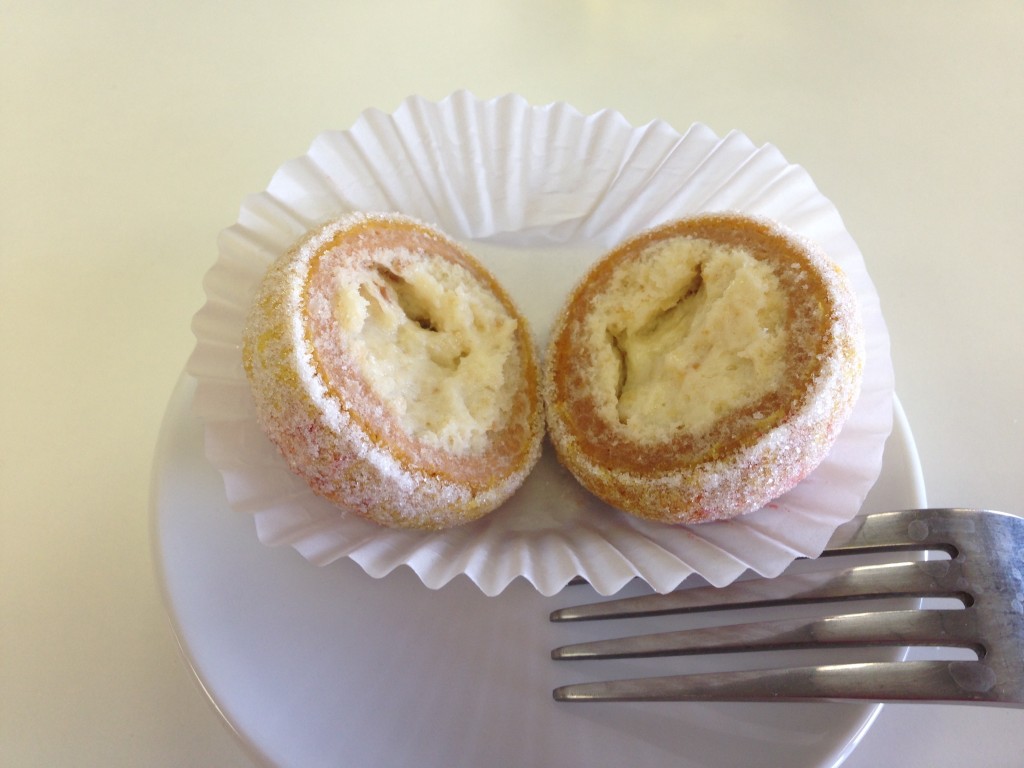 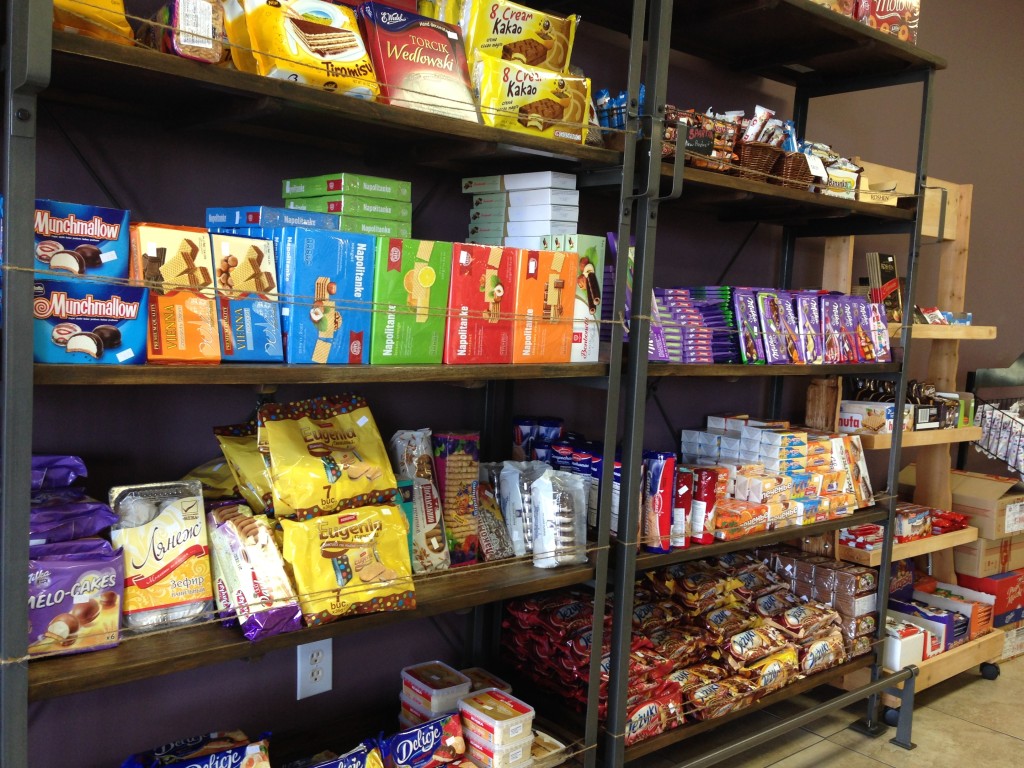 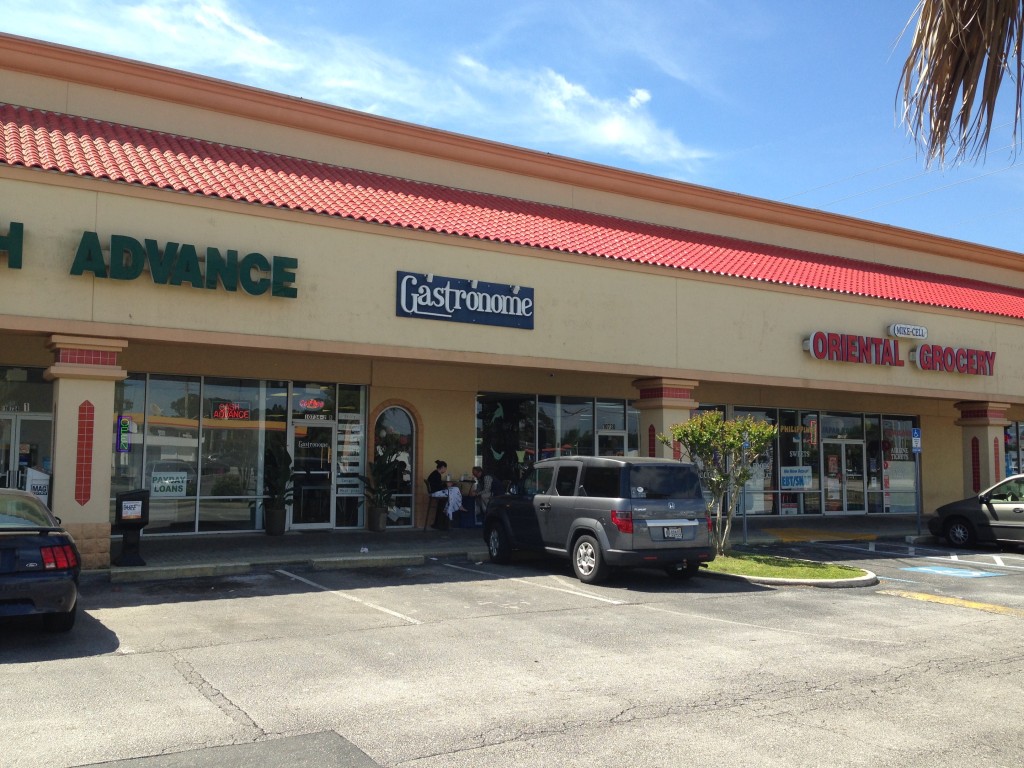