In 1895, British author Guy Beringer, in an article entitled, “Brunch: A Plea”, declared the following:

Instead of England’s early Sunday dinner, a post-church ordeal of heavy meats and savory pies, why not a new meal, served around noon, that starts with tea or coffee . . . By eliminating the need to get up early on Sunday, brunch would make life brighter for Saturday night carousers.

Even in 1895, people understood the true purpose of brunch: To sleep off a massive hangover from Saturday night partying, wake up late, eat some good food with maybe a Bloody Mary or Mimosa for a little “hair of the dog.”

Brunch has evolved throughout the years and while, yes, there may still be bit of the “nursing a hangover” part of it, now it’s more of a social event, a meal to gather around with friends and family, catch up on the week and reconnect. Beringer, in the same article says brunch should be “cheerful, sociable, and enticing. It is talk-compelling. It puts you in a good temper, it makes you satisfied with yourself and your fellow beings, it sweeps away the worries and cobwebs of the week.”

Who knew that a food writer in 1895 could perfectly encapsulate my exact feelings about brunch in 2018? Brunch is one of my favorite Sunday meals. It’s a perfect start to a relaxing Sunday; the exact type of Sunday one needs to mentally prepare for the whirlwind of the workweek ahead.

We were invited out to Vernon’s First Coast Kitchen and Bar’s new Sunday brunch concept, officially launching July 8th, 2018. Vernon’s is located inside of the Sawgrass Marriott in Ponte Vedra. Vernon’s Sunday brunch will have rotating themes every week. We went during the media launch event on Sunday, June 24th and the theme was “Farm to Table,” featuring many locally owned or grown ingredients.

Vernon’s brunch is buffet style and being in the Sawgrass Marriott, it was a higher end buffet. You can tell because they have the fancy sneeze guards. The buffet is filled with various breakfast and lunch options both sweet and savory. At the head of buffet is a garden salad section then down the line, various hot items. There’s way too many food stuffs to write a detailed report on them all, so I’ll hit on some of the highlights. 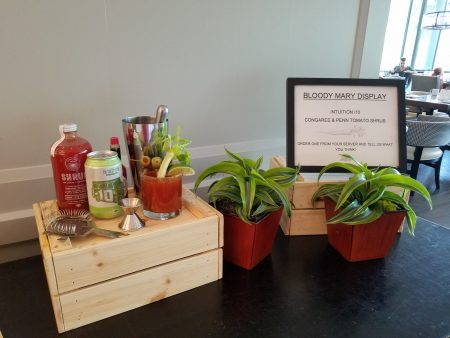 In its own section, apart from the main buffet, is a “kid’s zone,” a kid friendly buffet they can call their own. It keeping with the “Farm to Table” theme, it was decorated with a farmhouse and farm animal figurines. It featured bite-sized veggies and dips, sweets like rice crispy treats and cookies shaped like little pigs, as well as savory items like mac and cheese bites and pigs-in-a-blanket. It even had its own “cook to order” station in the form of a mini-pancake making machine, manned by a chef, who cooked and plated each silver dollar pancake. There was also a supervised kids activity station with various light arts and crafts. It’s great to see Vernon’s remembering the kiddos and making them feel special. 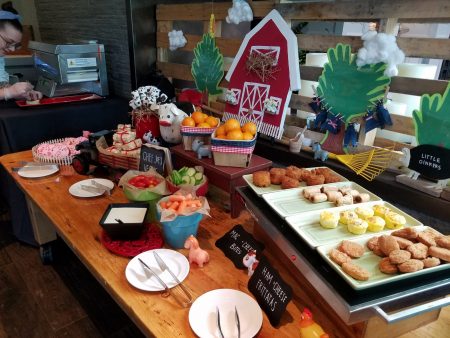 The hot buffet started with a brunch staple, Eggs Benedict. It was a classic Bene with an English muffin, ham, poached egg, and topped with hollandaise. My two favorite items on the protein side of the buffet was the Sausage Gravy and Biscuits and the thick cut pepper bacon. The sausage gravy was made with local Azar sausage and the gravy had a nice pepperiness to it and still remained thick and smooth, despite it being on a buffet. The thick cut pepper bacon was fantastic. It had a great flavor and cooked perfectly crispy. There was also Brioche French Toast made with bread from Jax Bread Co and Apple Pie Cinnamon Buns made from local baker and jam maker, Emily G.

The buffet is divided by an omelette station where a chef prepares omelettes and scrambled eggs to order with a variety of fresh ingredients. You can customize your own, or select from a menu of omelettes. I decided to go with a pre-determined option and selected the Sawgrass Omelette. It’s an egg white omelette with spinach, tomato, and goat cheese. I like watching people cook. It’s somewhat hypnotizing, like watching a fire crackle in the fireplace, or clothes tumble in a large laundromat dryer. I watched transfixed as the chef sautéed the spinach and tomatoes, added the egg whites, then expertly flipped the mixture, topped it with goat cheese, then folded it lovingly and gently on my plate, steaming hot. I thanked him kindly and moved on to through the rest of the buffet. 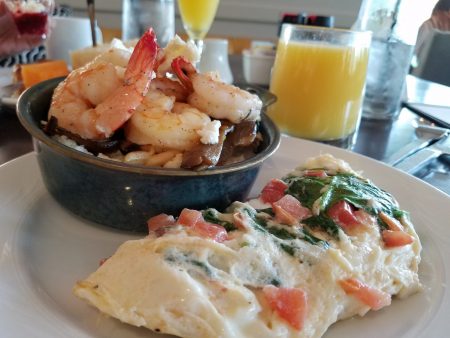 Past the omelette station are the veggies and sides. There were roasted St John’s Pee Wee potatoes and roasted cauliflower and romenesco, and a pan of roasted whitefish supplied by Fisherman’s Dock and an herb garden verde. At the end of the buffet was a carving station with what looked like a whole side of beef. It was Corned Beef Steamship with a whole grain mustard sauce made with Intuition Ale Works beer. The potatoes were my favorite of the sides and the Corned Beef Steamship with the whole grain mustard sauce is a definite can’t miss item. 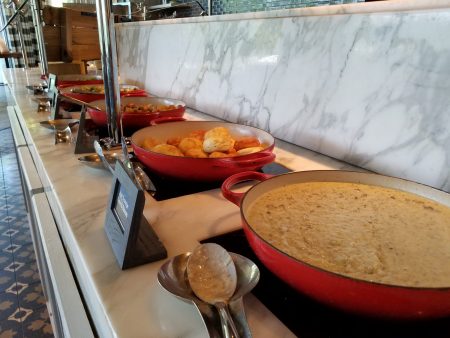 Behind the carving station is a dessert display with various cookies, brownies, etc. One of my favorite desserts was the Honey Goat Cheesecake. It was served in a tiny cup with a tiny spoon, but it had huge flavor. It was a beautiful mix of sweet and tart. The balance achieved with the Honey and Goat Cheese made this dessert “craveable.” I didn’t want to stop eating it. I actually want one right now as I type this. The honey for this dessert was harvested in-house right there on Sawgrass Marriott’s property. They have an actual, real beehive that supplies the restaurant with honey for their dishes.

To the left of the dessert station there was a bread, butter, and jam station. It was set up in what looked like one of those antique travel wardrobe storage trunks, flipped up on its side and opened. Each shelf displayed a bounty of various breads and biscuits with Emily G’s jams and their own line of honey. It was such a gorgeous set up, I didn’t quite know for sure at first if it was just for decoration. Very Instagrammable. 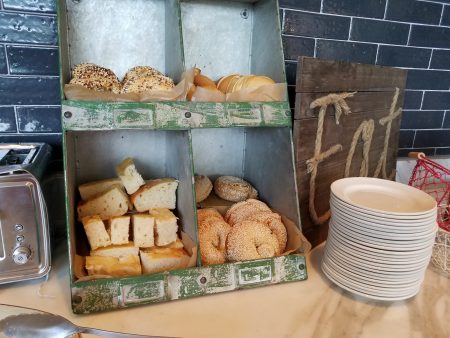 My favorite station of the day by a country mile was the Conagree and Penn Rice Grits station. The accoutrements for the grits were cooked to order. On one side you had some veggies and cheeses; mushrooms, roasted garlic, marinated artichokes, swiss chard, heirloom tomatoes, pimento cheese, and goat cheese. On the other side, there’s fresh shrimp and sea scallops. I chose shrimp, with sautéed garlic, tomatoes, swiss chard, mushrooms, and topped it all with bit of goat cheese. The chef did a great job cooking the shrimp. They were perfectly pink, plump, and pleasing. The veggies added a nice earthiness and the goat cheese tanginess was a nice contrast to the overall richness. The grits were warm, chewy, and hearty. Grits can be time sensitive and can go from creamy to spackle in about three seconds. These grits were a perfect in between. Not soupy, but not a congealed solid mess either. Once the cooked-to-order toppings were added, it gave the grits all the creaminess it needed. I’ve never had rice grits before and now I want all my grits to be Conagree and Penn rice grits. Corn grits, you’ve served me well over the years, but Conagree and Penn is the new hotness for me. 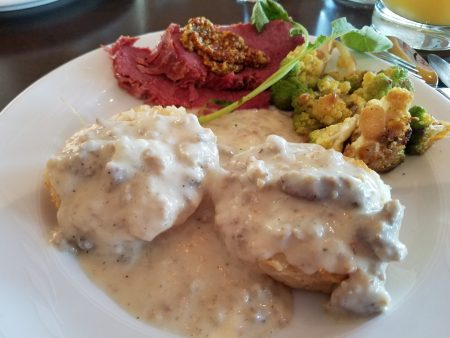 You’ve probably noticed a lot of links embedded in this article. Vernon’s is consciously making an effort to not only support local businesses by using them for their dishes, but also putting these local businesses in the spotlight for all customers to see. In the hotel lobby, right outside the restaurant, there were a few tables set up with local vendors highlighted in the menu selling their products. Did you like the jam you had with your biscuit? Emily G has a table set up so you can buy a jar to take home. Enjoy the honey in the Honey Goat Cheesecake? Buy a bear shaped bottle for yourself to enjoy anytime you want. I know this was a launch event, but I hope Vernon’s continue to have this “mini market” each week.

With this launch, Vernon’s embodies the spirit of brunch set forth by Guy Beringer as a meal featuring good food and good company. It looks like Sawgrass Marriott may have a winner on its hands with Vernon’s Sunday Brunch. Check it out for yourself when Vernon’s officially launches their themed brunches starting July 8th, 2018. 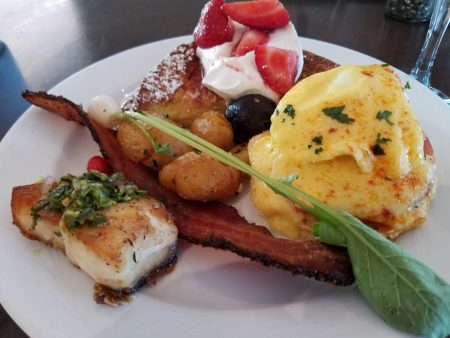 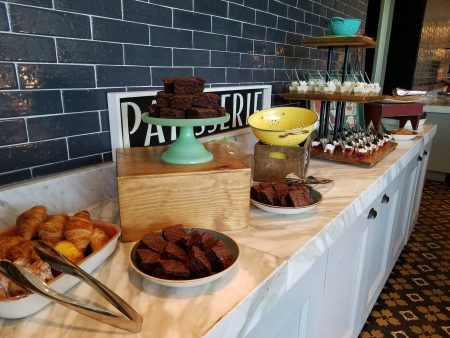