If you’ve ever watched a restaurant or food centered television show and been compelled to go find inspired dishes, you’ll understand our recent trip to Charleston, South Carolina. After binging Season 4 of Chef’s Table on Netflix this spring, we were on the hunt for molecular cuisine. Molecular cuisine is a modern, trendy sub type of cuisine where molecular gastronomy concepts are used to create new experiences relating to texture and flavor. The nearest molecular cuisine is at McCrady’s in Charleston. We planned a trip with friends, made reservations, and set out to explore this unequivocally southern town. 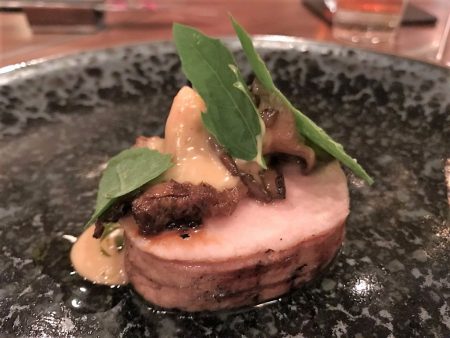 This award winning Charleston institution is a small, faded concrete block house turned restaurant in a less than popular area of Charleston. For the most part Martha Lou’s daughters and granddaughters now run the place, using the hospitality and recipes passed down from their matriarch. This is the southern hospitality many attempt, but few achieve. There are two prices on the menu: a meal with a drink or a meal without a drink. For your meal choose one meat and three sides. We had fried chicken with cornbread, mac n cheese, and chicken rice and BBQ ribs with lima beans, collards, and cornbread. The fried chicken was good, but the real stars were the collards. I feel like a traitor to my family and every soul food chef in town, but these were the best collards we had ever had in our lives. They tasted like potlicker, which is the remnants at the bottom of a pot of greens and also the densest nutrition, which historically and coincidentally is what was left for slaves in plantations. There are entire books devoted to the history of potlicker if you are interested in learning more, but for our purposes know that it is delicious and Martha Lou’s Kitchen makes bomb collards. The surprise hit was the limas which were savory and thick. I could eat these every day for the rest of my life. The cornbread had a sweetness to it that was unexpected, but tasty. The BBQ ribs were nice and tender. Martha Lou’s is worth a stop in Charleston. Don’t be shy. 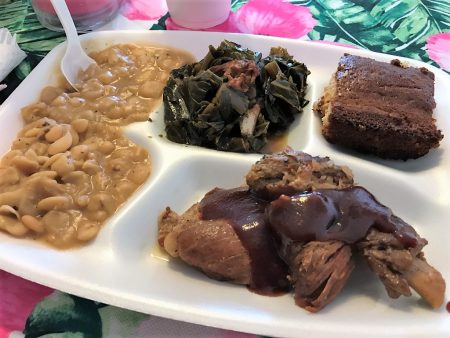 MacCrady’s Tasting Room was the reason for our trip. It is a restaurant within a restaurant, tucked inside McCrady’s Tavern. If you stopped at the Tavern for lunch or dinner you would never ever know about the Tasting Room. But now that I’m telling you, put it at the top of your travel/restaurant bucket list. McCrady’s Tasting Room is helmed by James Beard Award winning Chef Sean Brock, featuring molecular gastronomy dishes, seating 22 people and offering only one menu: the tasting menu. The tasting menu is a dozen or more seasonal courses, at the cost of $115 per person. There is a caviar complement, a wine pairing, a reserve wine pairing, and a non-alcoholic pairing that can all be added ahead of time or the night of your dinner if you wish. 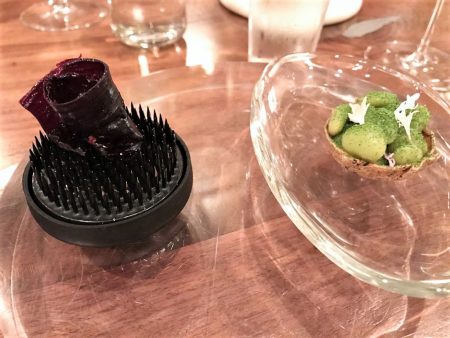 A meal at McCrady’s Tasting Room is about the experience as much as the food. The seating consists of a U-shaped bar overlooking an open kitchen and a private dining room seating up to eight guests. When we arrived at the google maps destination for our reservations there was a sign on the door to enter the tavern through the alley just down the street. We turned down the alley and it felt like we were approaching Diagon Alley with the narrow cobblestone street, the old stone buildings on either side of us, and the arched wooden door we arrived at. We entered McCrady’s Tavern, which felt every bit of a tavern with warm wood, exposed brick, and low light. The Maitre D let us know the party before us was just finishing up and it would be a couple minutes until our table was ready. When the time came, he led us through the tavern directly toward a flight of wide wooden stairs. He took a right at the stairs instead of ascending them and we went through a nondescript door that would have kept tavern guests in the dark. We stepped through a stone foyer into a bright but intimate room, passed a large U-shaped bar, and into a private dining room at the far end. The alley, the secret door, the stone structure, the arched wooden doors, it all felt very Wizarding World.

Our head waiter, Matt, was more of a party facilitator than anything. Having been to some other restaurants featuring tasting menus, McCrady’s lacked the stuffiness and pretention that is typical. Which is not to say it lacked class or formality; it only lacked snobbishness, which we didn’t miss at all. We were with a group of friends, some of whom decided on the caviar accompaniment, some on the wine pairing, some on a single cocktail, and we enjoyed the non-alcoholic pairing. The non-alcoholic pairing is unique and such a fun addition to a meal that intends to be fantastical. 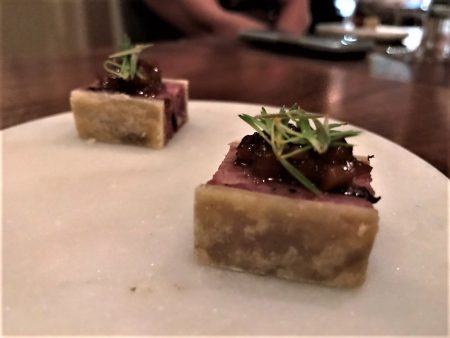 We started with champagne for the table, and then courses began arriving in sync. There was frozen uni on gold paper over ice, orange beet leather that arrived rolled up on a tiny bed of nails, Sapelo clams from Georgia with almost translucent slices of kohlrabi, a shrimp cake of sorts, fish with white asparagus and mushroom chamomile tea poured over the top, a rice dish with savory custard and puffed cereal, banana ice cream with black lime grated over the top and finished with a banana sauce that tasted exactly like caramel, a “foitchamacallit” which was a housemade Whatchamacallit candy bar with foie gras. Every bite had more flavors than you could identify, though we tried. The meal lasted just over two hours, and though we didn’t feel completely stuffed, as we left and walked to our cars we could feel in our bellies how much food we had just eaten. We were given black envelopes with the menu of our dinner, a personal note from the staff, and heirloom red pea seeds from Chef Sean Brock’s personal collection. 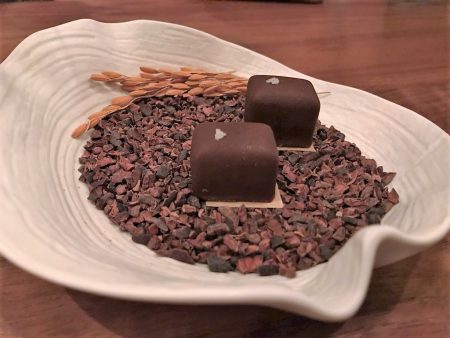 We had an absolute blast at McCrady’s tasting room and I’m sure that’s not just the wine talking. Going with a group of friends was the best idea. I would love to go back, even though I’m afraid it would be a hard experience to top. If you plan to go be sure to make reservations well in advance. The largest group they can accommodate is eight, and reservations fill up quickly with only 22 seats available. 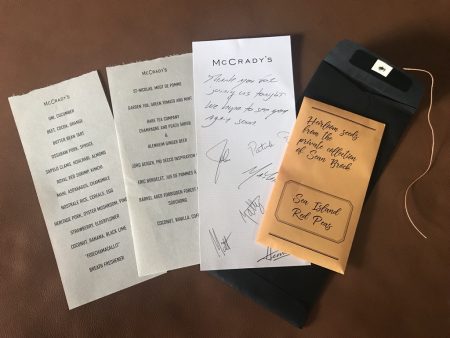 Before we left for home we found an out of the way spot for brunch. Iron Dog Diner was definitely a hipster trap, but it delivered. The small menu featured Dutch Baby pancakes, chicken and waffles, fried green tomatoes and grits, a monte cristo, and the like, all at very affordable prices. We were surprised at how delicious Iron Dog Diner was. The Dutch Baby pancake was everyone’s favorite, but the Country Fried Steak Biscuit was good, too. This mid-century modern diner is open for four hours just five days a week, so if you go make sure they’re open first. 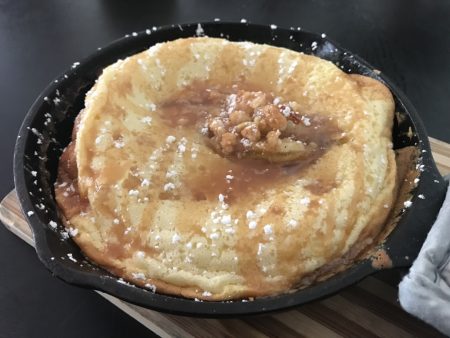 This barely scrapes the surface of the amazing restaurant scene in Charleston, but if you’re planning a trip you can’t go wrong with Martha Lou’s Kitchen, McCrady’s Tasting Room, or Iron Dog Diner. These three restaurants give three different perspectives on Charleston, and you’ll love them all.