Zoe’s is a fast casual restaurant, much like Panera, but with an exciting Mediterranean flair. They originally started in Jefferson County Alabama (HQ’d in Texas) but they’ve quickly expanded across the Southeast US. Locally, Zoe’s kitchen has just opened in the St Johns town center, in the old Qdoba location. Does it feel weird to anyone else that I just said something was old in talking about the town center? Because most of the time I still think that place is brand-spanking new. I guess it’s been almost 10 years since it opened. Excuse me while I cry in my coffee and consult google about botox. While Zoe’s kitchen is not new to Jax (there is one in Ponte Vedra and one in Riverside), it is new to the St. John’s Town Center. You can find it on the corner near Chik-Fil-A, Crispers, and one of our favorites, Sweet! By Holly. As is the nature of the town center, the parking lot can get congested at peak times, so have patience and watch for small, disorderly children. They’re everywhere. It’s an epidemic. Haha, we’re just kidding. We took our own small disorderly child along for this visit to Zoe’s. 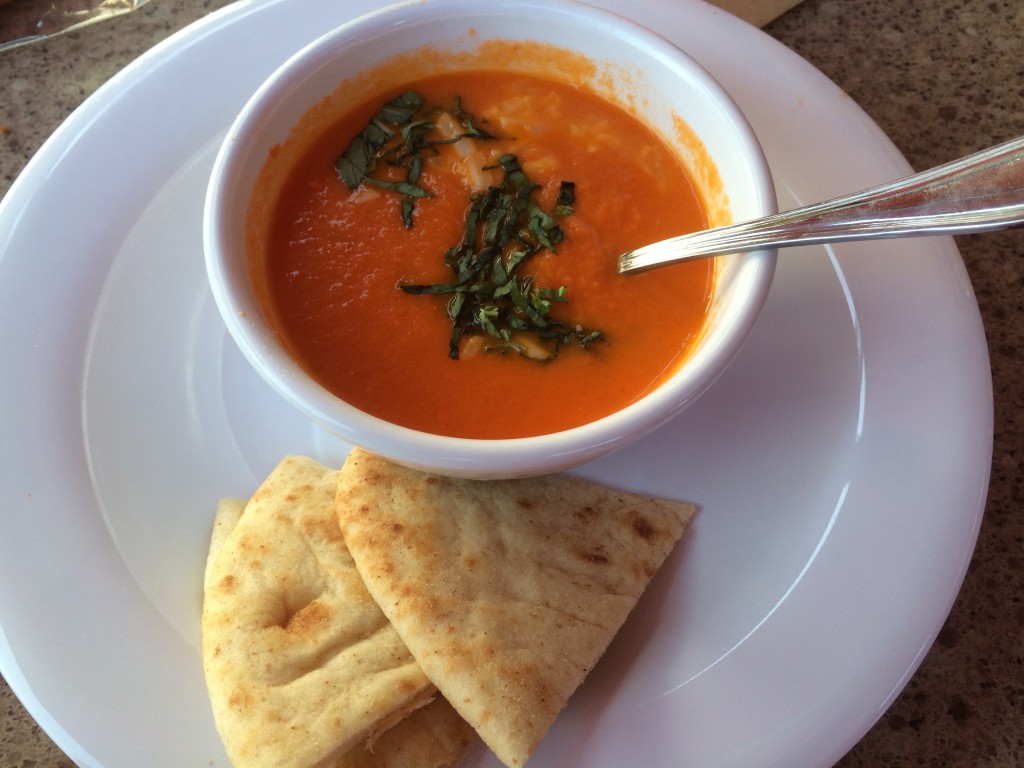 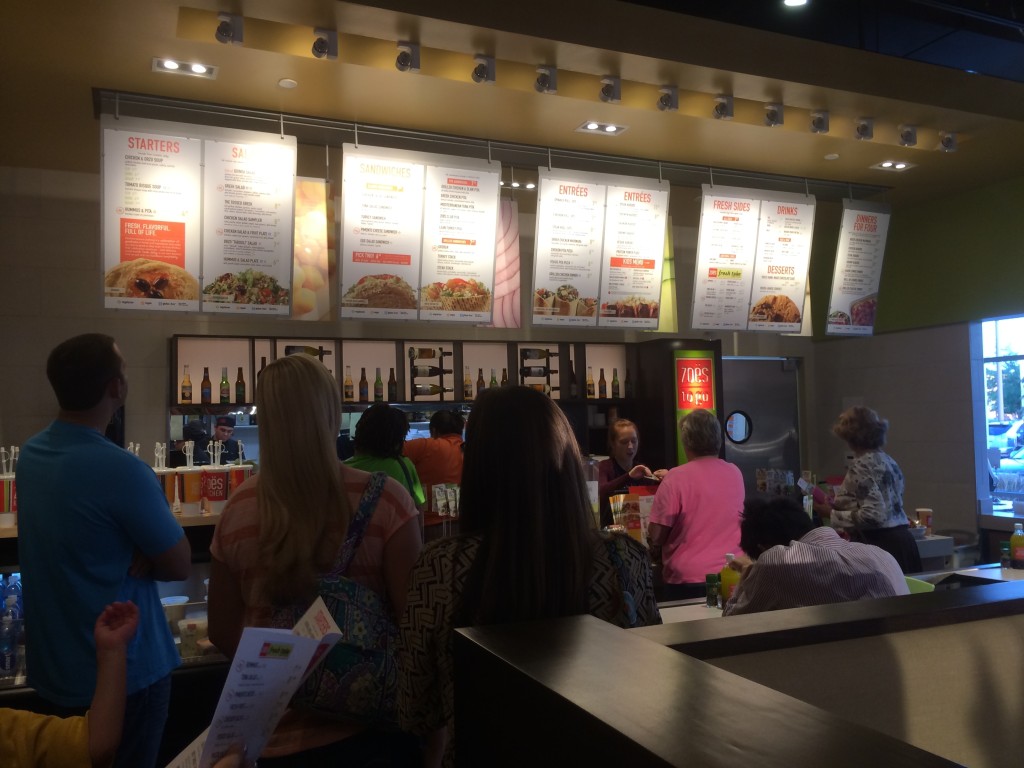 Food: The day we stopped by for dinner we tried hummus and pita chips, Greek Salad with grilled chicken, Zoe’s Club Pita with rice pilaf, and Chicken Kabobs.
The hummus was for the lean, mean, 3-year-old bean machine. It comes with pita, which sounded wonderful, but he demands crunchy snacks, as most toddlers do. So the people at Zoe’s were kind enough to supply us with pita chips in lieu of pita. We keep a supply of grocery store hummus in the fridge at all times, and Zoe’s hummus was no ordinary hummus. It was very soft and smooth, you could taste a little lemon and substantial garlic in each bite. Delicious. We tried the tomato soup as an appetizer. It was your standard run of the mill tomato soup. Nothing special about it and not the best. I’d gets something different next time. Zoe’s has plenty of better options. Zoe’s Greek salad was our next choice. One thing to note is that Zoe’s serves their Greek salad traditionally, which is with a hidden treasure of potato salad under the lettuce. Many people think this is strange. It is simply the traditional way to serve Greek salad. I actually don’t care for potato salad, so I ordered it without potato salad and added grilled chicken. The salad was enormous! It had tomato, cucumber, peppers, olives, onions, and feta. Zoe’s serves and also sells their own Greek dressing, which is on each table along with the salt and pepper. It’s a very flavorful dressing for a very fresh and flavorful salad. The veggies were all crisp and ripe- no sad tomatoes here. The grilled chicken is marinated and seasoned with Greek spices, and then grilled. Zoe’s prepares all of their chicken this way. Luckily it’s yummy. Zoe’s Greek Salad is a great healthy and vegetarian option, if you don’t add meat to it.
Next up was Zoe’s Club Pita. This is a club sandwich going Greek. It’s grilled chicken (the same grilled chicken we just discussed), ham, Swiss cheese, lettuce, tomato, and spicy mustard, all stuffed in a pita. What’s so Greek about it? Well, the pita and the chicken. It was pretty straightforward, but yummy and filling. The club pita comes with a side and we chose rice pilaf. I’m sure it wasn’t too healthy because it was delicious. I’m glad I just stole a few bites from my dining partner instead of having it all to myself.
From the entrée section of the menu we tried the Chicken Kabobs. These came as two kabobs with chicken seasoned the same way as the other chicken dishes, peppers, onions, tomatoes, rice pilaf (more yum!) and a side Greek salad. There was again, plenty of delicious food. This is another great and healthy option, especially for all of you paleo people. It would be simple to sub out the rice for roasted veggies or fresh fruit, or even the marinated slaw. Most notable about this entrée was how well Zoe’s seasoned the grilled chicken. Normally grilled chicken can be a little bland. This chicken was full of flavor and could make an unhealthy eater want to eat healthy…..at least for this meal. 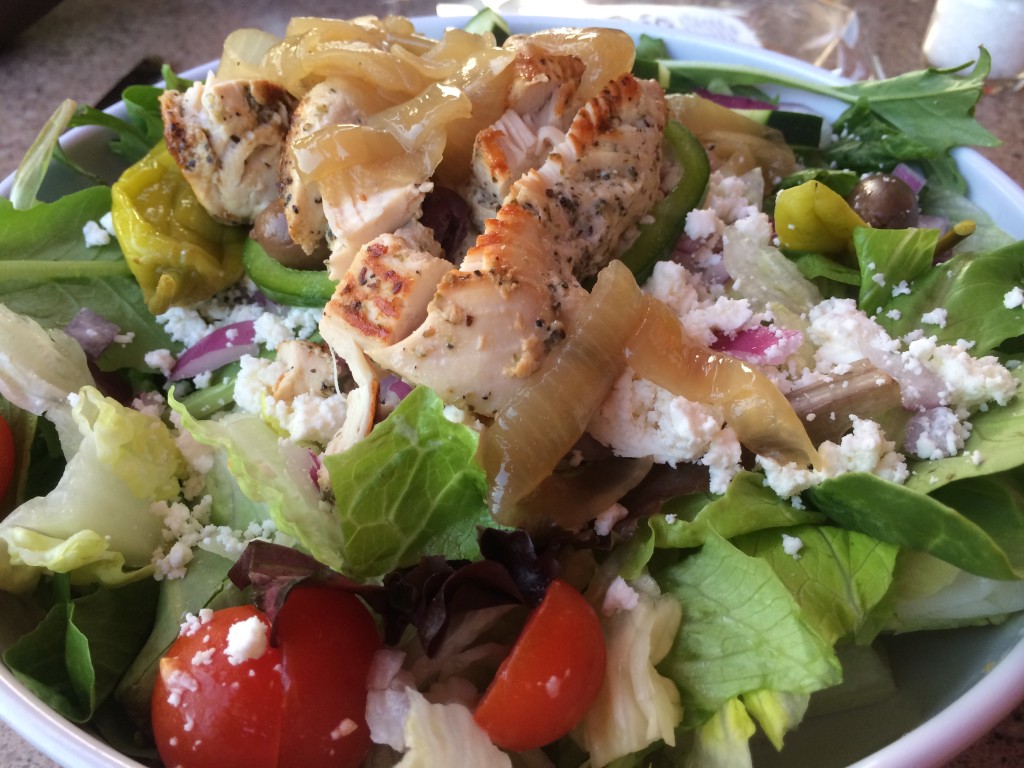 Service: The service was surprisingly noticeable. Often in fast casual type restaurants you only notice the service when it stinks because of the limited interaction with employees. Zoe’s had very attentive service. We happened to be there on one of their first days during dinner. It was pretty busy. But the cashier graciously adjusted some of our orders (we asked for pita chips instead of pita, which are usually sold separately, but she switched them out for us). There were many people clearing tables, delivering food, etc. During our meal we overheard a conversation at the table next to us. A woman wasn’t happy with her meal. There was nothing wrong with it, it was just different than she expected. The manager was checking in with guests to meet any needs, and the woman mentioned she didn’t like what she had ordered. The manager asked her a few questions to get an idea of what she might like and then offered to go make her an entirely new meal. I could tell she almost felt bad, she hadn’t been asking for the manager to do that. I believe they settled on an appetizer of hummus. I was very impressed that the manager was willing to do what it took for this woman to have a positive experience, even though the restaurant had not wronged this woman in any way. 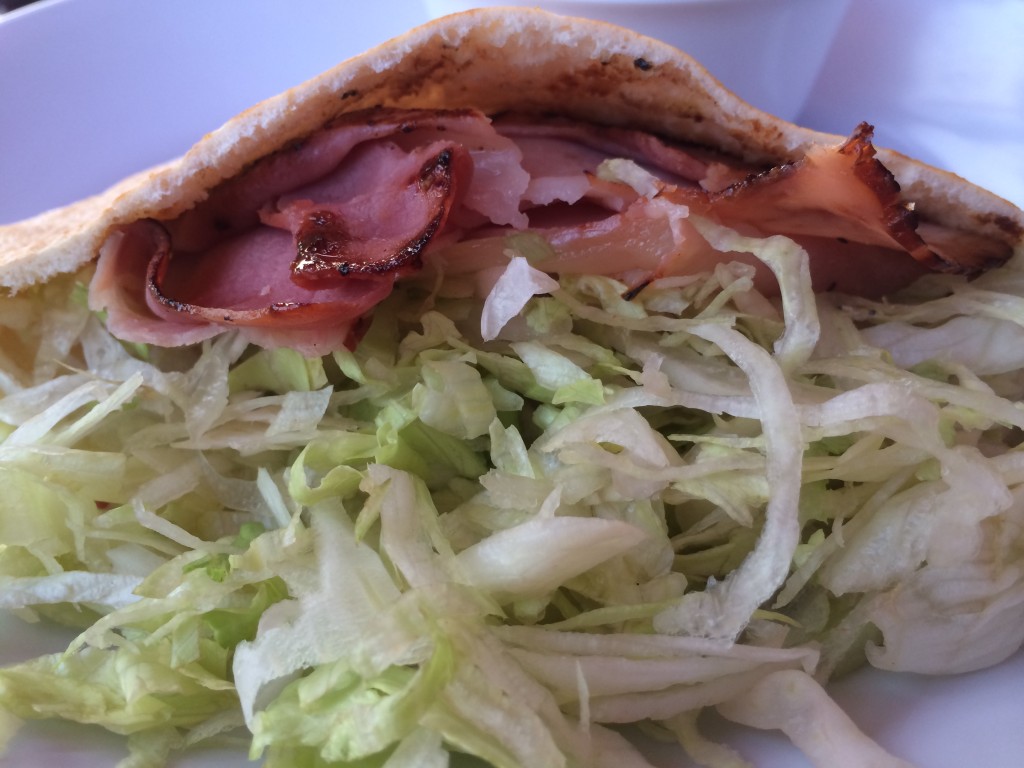 All in all, Zoe’s is a pretty straightforward restaurant. They do a lot with the set of ingredients they have chosen to define their restaurant (pita, grilled chicken, salad, etc.). It’s an easy place to have an equally healthy and enjoyable meal. 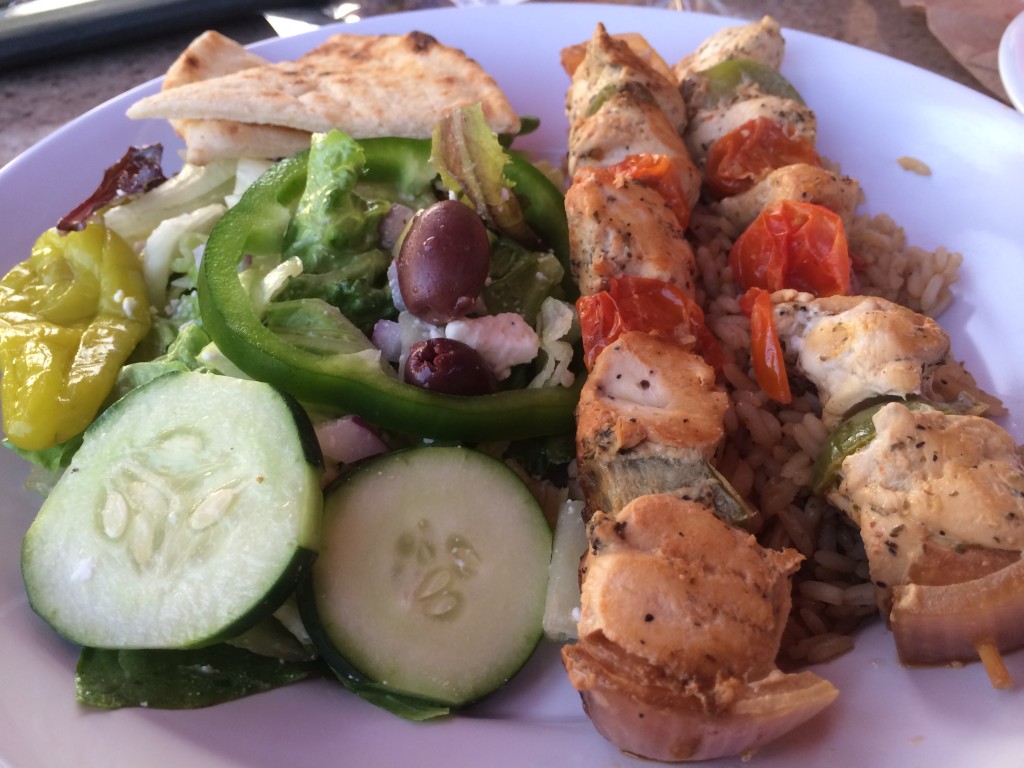