Sweet by Holly is a dessert spot with cupcakes, frozen yogurt, and soft serve ice cream. It is in the St. John’s Town Center with ample parking near Crispers, behind Chik-fil-a. Sweet by Holly is the creation of Hollis Wilder, a former Hollywood personal chef to the stars and a two time winner of Food networks cupcake wars. Thankfully for those of us with a sweet tooth in Jacksonville, Miss Holly and her husband decided to make a move to Florida. In 2008 she began blessing Floridians with her cupcake genius. The original Sweet by Holly opened in Winter Park, Florida. Our location in the St john’s Town Center is the only other location. When you finish reading this article I imagine you’ll want to take a trip on over to the town center to see her cupcake genius for yourself. 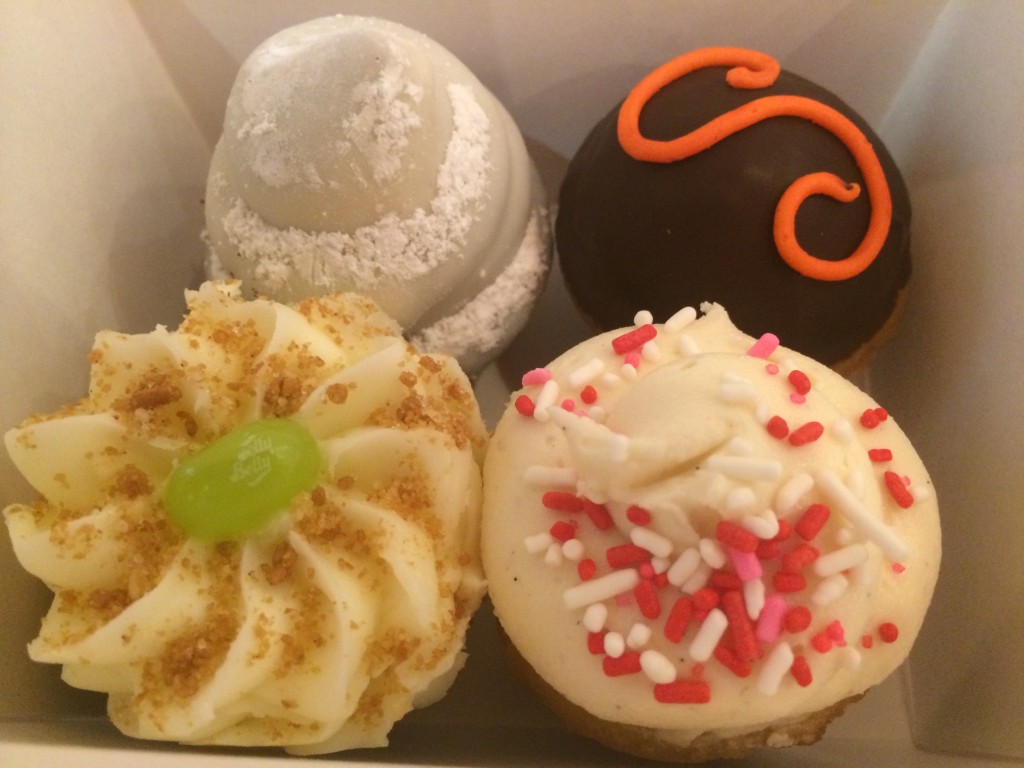 I’m going to let the cat out of the bag and tell you that the cupcakes at Sweet by Holly are some of the absolute best cupcakes I’ve ever eaten. They just may be the cupcakes to compare all other cupcakes too. These cupcakes might change your life. Allow me to demonstrate. My mom brought a few mini cupcakes home from a work event where there were extra cupcakes from Sweet by Holly (Why were there extra Sweet by Holly cupcakes? This is one of life’s great mysteries.). I saw them and asked if they really were from Sweet by Holly. Then I made a big deal of said cupcakes. My sister in law questioned my allegiance to these cupcakes and also my willingness to shell out $2 per mini cupcake. She said they couldn’t possibly be worth $2 for a MINI cupcake. So I made her eat one. And I quote, “Oh my god!” Yes, after one bite, she too was willing to shell out $2 for one mini cupcake.

So let’s talk about these cupcakes, what makes them so good? I’m not really sure except that Miss Holly is a dessert genius. The cupcakes come in mini ($2), classic ($2.50), and original ($3) sizes. The classic is your typical muffin pan size, with the originals being extra-large. Sweet by Holly also offers gluten free cupcakes ($3, classic size) and giant cupcakes ($55, serves 8-12 people). There are officially 32 flavors of cupcakes at Sweet by Holly, but often there are additional seasonal flavors. Miss Holly touts how mini cupcakes allow you to enjoy your sweets without the guilt of eating a huge cupcake. For me minis just mean I eat 3 minis instead of one big cupcake. I challenge you to eat just one! We will highlight some of our favorites:

The Plain Jane- yellow cake, vanilla buttercream, sprinkles. This is a great place to start. It seems so simple and it looks so cute with its rainbow jimmies. It is amazingly moist and tender without being squishy or falling apart. The frosting has a rich vanilla bean flavor without being overwhelmingly rich. Regardless of how many other flavors as I try and love at Sweet by Holly, the Plain Jane remains one of my favorites for how simple and decadent it is. Cupcake purists, this is the one for you. 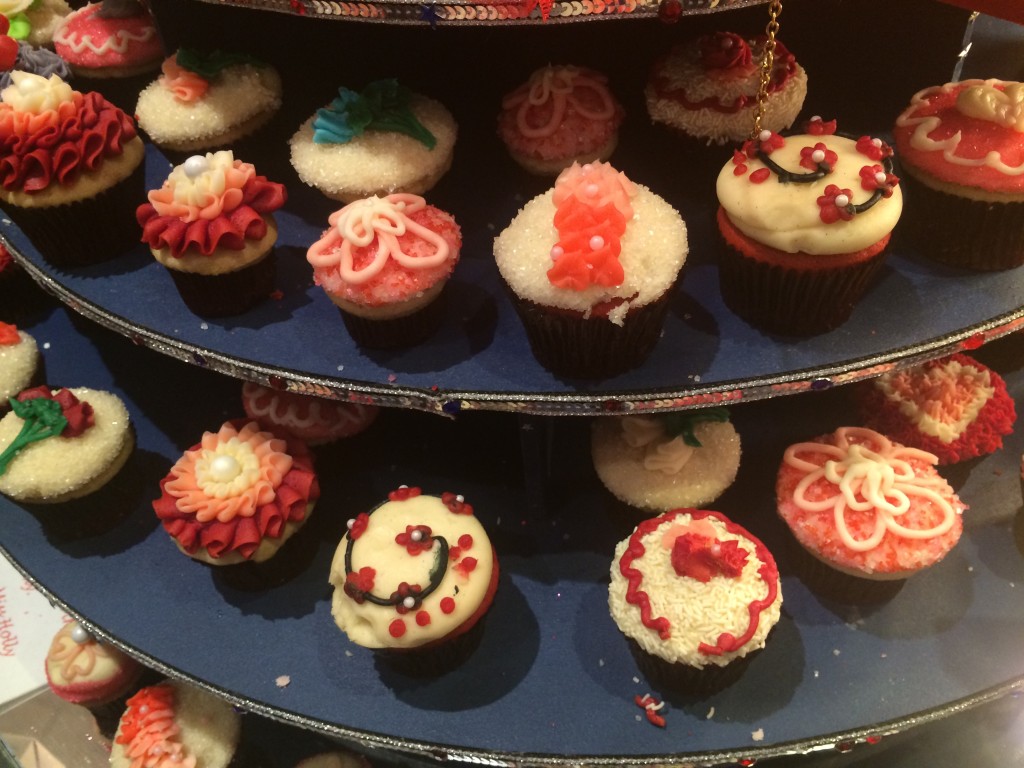 Sweet by Holly – Rainbow of Goodness

Boston Cream – yellow cake, vanilla buttercream, chocolate ganache, cream filling. Do you like Boston Cream Pie? Do you like Boston Cream Donuts? Then include this cupcake in your Mini selection. It nearly pains me to admit this, but I don’t love this cupcake. It seemed to have less flavor than the Plain Jane. Then again I’m not a huge boston cream fan. Don’t get me wrong, there is not a bad cupcake at Sweet by Holly. This one is just not in my top 5. Or my top 10.

High Hat -dark chocolate cake, chocolate ganache dipped vanilla buttercream. This is an impressive looking cupcake. You know how I keep saying that all the flavors are balanced so well that the cupcakes aren’t too rich? The High Hat does not qualify for that statement. It is bold in its richness. When you want something completely decadent that will walk the line between a sugar high and a food coma, the High Hat is the cupcake for you. Also, if you love frosting, this one has some extra which is used to create its signature cone shape.

Black and Gold- yellow cake, dark chocolate frosting, caramel filling. This little ditty falls into the same category as the High Hat. Its rich and decadent. It’s very sweet. Don’t eat too many of these in one sitting! 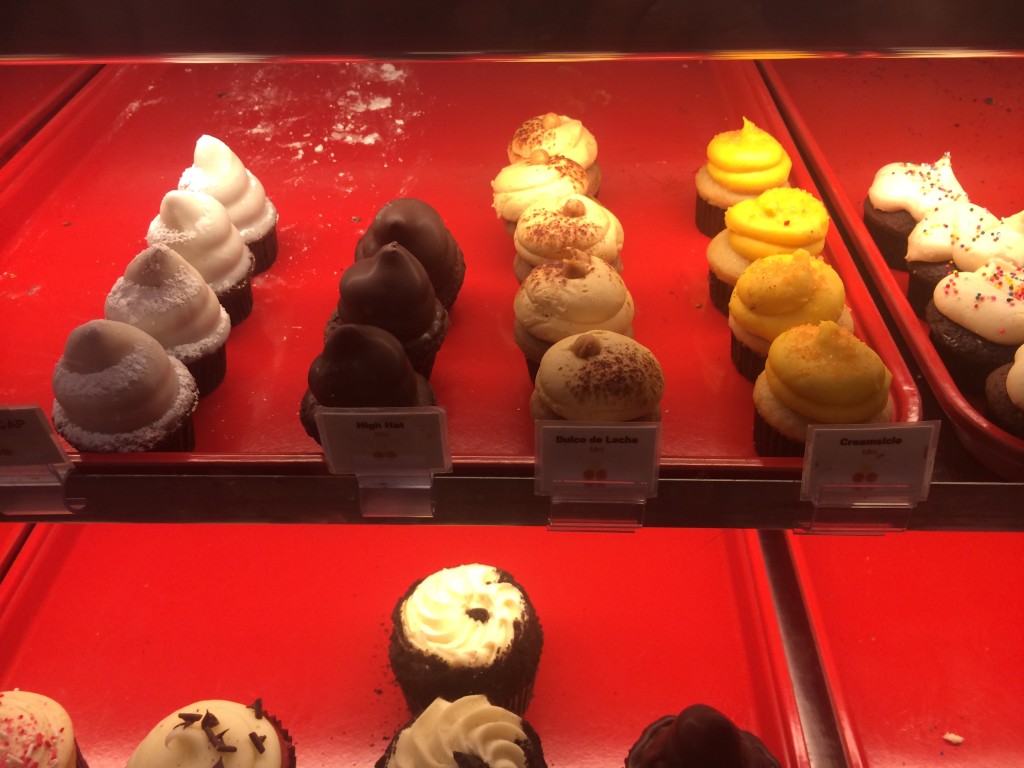 Nutella- nutella swirled cake and filling, cinnamon, caramel buttercream. I was ready to fall in love with this one. After all, NUTELLA. But I didn’t fall in love with it. I tried it without reading the description and it reminded me of spice cake rather than nutella. I realized after reading the description that the cinnamon was leading me away from the nutella flavor. Honestly, I find nutella flavored desserts to be less satisfying than simply a spoonful of a nutella. So consider how you feel about nutella desserts before ordering this one. And note the cinnamon. I’m not a huge cinnamon fan so that could be it too.

PBJ- peanut butter cake, pbj buttercream, grape jelly filling. The PBJ cupcake was a surprise winner for me. It sounded like something my kid would order or invent. I was pleasantly surprised that it did not taste like the pbj’s of my childhood, but rather the pbj’s of my dreams. If you are a peanut butter fan, don’t miss this one. I was afraid the jelly would bring down the glory that is a peanut butter baked good, but there was just a hint of jelly flavor in the frosting, enhancing instead of distracting from the peanut butter. This is a cupcake made in PBJ heaven.

Carrot- spiced cake with walnuts, coconut, raisins, pineapple, cream cheese icing. My apologies, but this is better than your grandma’s carrot cake. This is the cupcake that won over my sister in law. If you are concerned about the raisins, coconut, or pineapple, don’t be. They work beautifully together, enhancing and taking on the flavor of the spice cake. The Carrot is always a solid choice at Sweet by Holly.

Red Velvet- traditional red cake, cream cheese icing, dark chocolate curls. Maybe you’ve had red velvet cake a million times. You’ve never had Miss Holly’s Red Velvet cupcake. It’s simple, straight-forward, traditional, and Miss Holly hits it out of the park! The Red Velvet is absolutely delightful. I’ve never tasted more perfect red velvet cake. This should be a definite to include in your box of minis. My friend who doesn’t even like red velvet cake likes this one.

I guess we should mention the frozen yogurt. It’s good and there are plenty of toppings to choose from. They normally offer 12 flavors. Their yogurt matches up fairly well with the rest of the frozen yogurt spots in town. 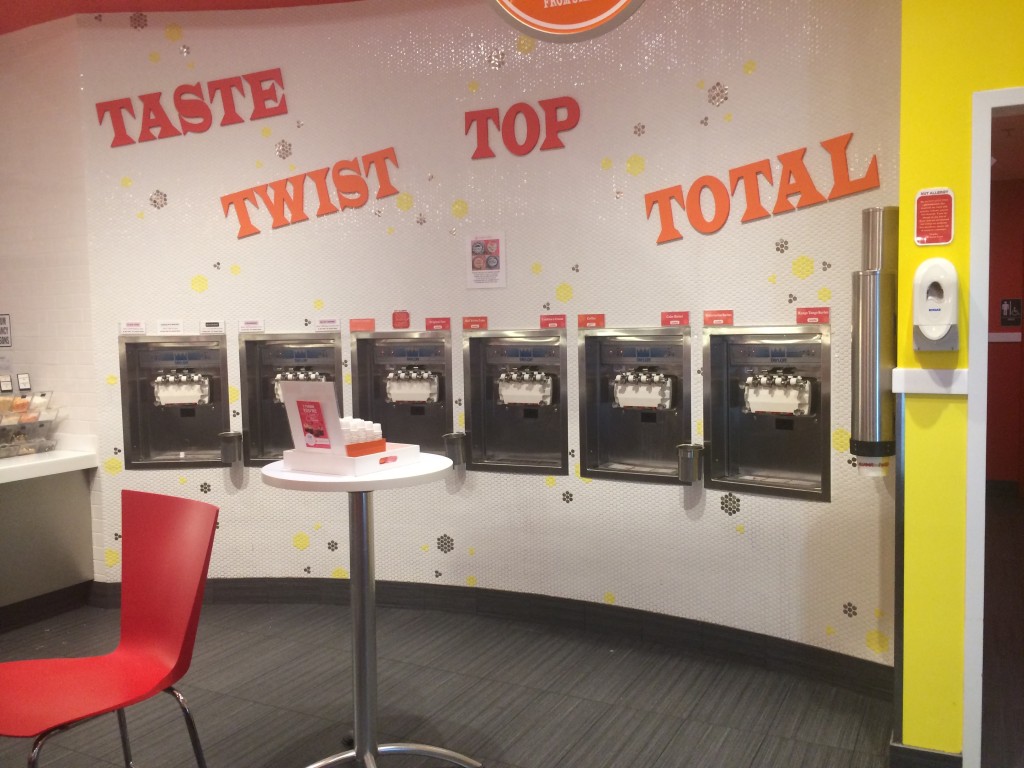 A final three things we love about Sweet by Holly:
The first is that the cupcakes are absolute eye candy. They are gorgeous little works of art. I wonder what the average amount of time is that it takes each customer to choose their cupcakes? The case of cupcakes is positively mesmerizing. I’m sure the employees at Sweet by Holly get tired of non-responsive customers with their mouths hung open staring at the case of cupcakes. If they do, you’d never know it. They are extremely nice and helpful.

The second thing we love about Sweet by Holly is the imaginative flavors. From Nutella to PBJ to Creamsicle to S’mores, it seems there isn’t much Miss Holly won’t try and succeed at. With over 30 flavors and additional seasonal flavors, there is always a creative cupcake to try.

The third thing we love about Sweet by Holly is how simple it is. It’s cupcakes and frozen yogurt. The best cupcakes there are the ones you have eaten a hundred times from a hundred different places. A regular yellow cake cupcake with vanilla buttercream frosting, you say? Anyone can make that, right? Sure. Miss Holly just does it better. The same goes for her red velvet cupcakes, carrot cupcakes, and German chocolate cupcakes. She did not invent anything about those cupcakes. She just made them far and away better than almost anyone else does.

Service: As I previously mentioned, Sweet by Holly is both simple (cupcakes and frozen yogurt) and overwhelming (30+ flavors of cupcakes on display to tempt you). The folks that work at Sweet by Holly are upbeat and helpful, no matter how much time you spend slack jawed in front of the cupcake case. They know cupcakes so they can help you figure out how many you might want and they can recommend varying flavors.
One time I walked in and bought three dozen mini cupcakes for a party. The employees were knowledgeable about how many flavors and what variety would be best. They also carried my cupcakes to my car, in the rain, with a smile on their face. Despite the fact that the service is limited in that it’s counter service and not full service like a restaurant, the customer service is always excellent. I’ve only had positive interactions with the folks at Sweet by Holly.

Tips: The best way to eat Sweet by Holly cupcakes is to get a variety of minis for $1/each on Mini Mania Monday (every Monday) and share with a friend. Or keep them for yourself, we won’t judge.

Take a minute and check out this youtube video which details the story of Miss Holly and how Sweet by Holly was born: