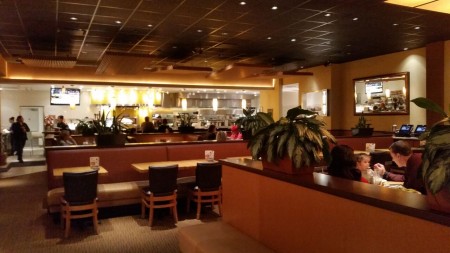 The restaurant itself has a warm and inviting feel.  It’s an open kitchen design, with the fire-breathing oven taking center stage and immediately drawing your eye.  We were greeted cheerfully by the manager, Laura, and seated quickly.  Jessica, our server, took our drink orders. California Pizza Kitchen not only added new food items to the menu recently, but also new drink and cocktail selections.

My dining partner ordered one of those new cocktails, the Blood Orange Sangria.  It consisted of Bicardi Limon, Kendall-Jackson Chardonnay, St. Germain Elderflower, blood orange puree, and fresh agave nectar.  I don’t drink alcohol, so this is the “she said” portion of this review…“It was very fruity and sweet.  Very refreshing.  There’s a light floral note from the St. Germain Elderflower mix.  I couldn’t taste the alcohol much, so it’s a good cocktail for those that like alcohol, but still want to be able to walk at the end of the night.” 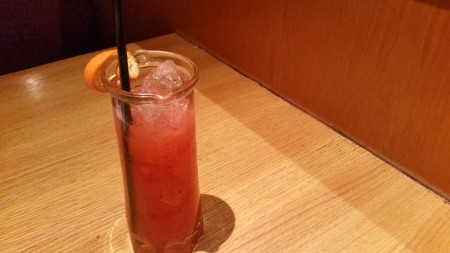 I ordered the non-alcoholic Strawberry Mango cooler.  It’s a hand-shaken drink made with fresh strawberries, Fresca, and Monin South Seas cocktail syrup.  The Monin South Seas syrup itself is made from mango, guava, and ginger.  It was a very bubbly drink with a lot of carbonation thanks to the Fresca.  I usually don’t drink carbonated drinks, so it hurt a little going down at first, but I adjusted.  There were big bits of strawberries that, when mixed with the Monin South Seas syrup, gave the drink a nice red and yellow hue.  Just like the Blood Orange Sangria, it was also fruity and fresh tasting.  A great drink for those wanting more than just tea or soda. 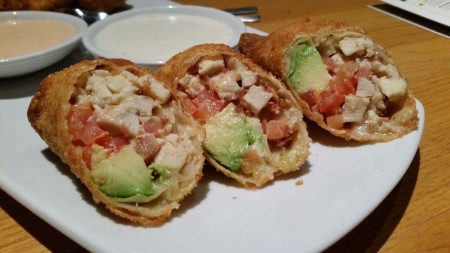 One of the new menu items on California Pizza Kitchen’s menu is the Fire Roasted Ribeye ($24.99).  CPK’s ribeye is a boneless 11-ounce steak.  I ordered it the way God intended steaks to be cooked – medium rare.  The steak arrived and it was beautifully plated on a wooden cutting board.  The steak is seasoned with Pinot Noir salt and topped with a dollop of blue cheese butter.  It came with a huge mound of arugula salad, glistening in a light vinaigrette and a Jenga-like stack of fingerling potatoes roasted to golden brown deliciousness.  The arugula salad and fingerling potatoes were great.  The arugula had a nice bitterness to it and the potatoes had a crunchy roasted exterior giving way to a fluffy, pillow-y interior.  The steak had gorgeous crisscross grill marks, the seasoning was on point, and that blue cheese butter was tangy, but also a little sweet.  Everything leading up to me taking my first bite was everything I looked for in a perfect steak.  The only thing remaining: how was it cooked?  I ordered it medium rare, but alas, it came out medium, almost bordering on medium well.  A little disappointed, but the flavors and sides were spot on. 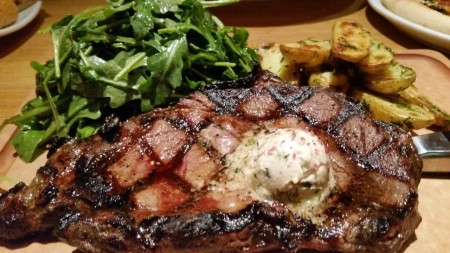 My dining partner ordered the Shrimp Scampi Zucchini Fettuccine.  The shrimp is sautéed with lemon, garlic, and white wine, tossed with zucchini ribbons, fettuccine, parsley, and parmesan cheese.  The pasta and shrimp were cooked nicely, not overdone.  The zucchini ribbons provided a bit of crunch, texture, and freshness.  The only issue I had with the dish was the sauce.  It seemed a bit under seasoned and thin – it was more of a broth than a sauce.  Scampi sauces can be a bit on the thin side, but finishing the noodles in the sauce helps thicken it as the noodles release some of their starch into the sauce.  It seemed that wasn’t the case in this dish. 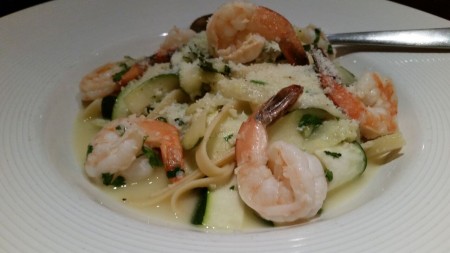 We couldn’t leave California Pizza Kitchen without trying a pizza, so for our final entrée we ordered one of the new seasonal pizzas, the Sunny Side Up Bacon and Potato Pizza.  It’s topped with shaved fingerling potatoes, Applewood smoked bacon, caramelized leeks, parmesan, mozzarella, and cracked black pepper.  It’s finished off with two eggs cooked sunny side up.  I would describe this as a great hangover recovery breakfast pizza – hearty, filling, and just the right amount of greasy.  I loved the sunny side up egg.  Breaking the yolk and spreading that wonderful yolky-ness all over the pizza created depth and sauciness.  I only wish there were two more sunny side up eggs for the other half of the pizza.  The leeks were a nice deviation from the traditional onion that might have normally topped the pizza.  Leeks have a bit milder flavor than onions, so it was a nice balance to the strong flavors of bacon and egg.  The crust was perfectly crispy and had a good toothsome chew to it.  A strong ending to the meal. 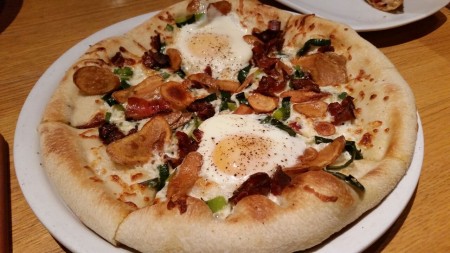 California Pizza Kitchen’s menu is large enough to satisfy even the pickiest of eaters.  There’s something for everyone.  Don’t like pizza?  There’s pasta.  Not feeling pasta either?  They have tacos.  Not in the mood for Mexican?  Try the Sesame Ginger Dumplings.  The new menu items are heading in the right direction of California Pizza Kitchen appealing to most everyone that walks through the door.  Overall, the flavors are right on point.  There are some opportunities here in technique and execution that I’m sure will improve with time, but again, overall, it was a good visit.  If you have a family that wants a little bit of everything, California Pizza Kitchen will oblige.

Rich likes to think of himself as a ‘pig with lots of adjectives,’ that is, he loves to eat and he loves to write. Eating for him is more than just sustenance. It’s about the experience. He hopes readers can share in his experiences as he continues to eat and write his way through Jacksonville. You can follow him on Instagram @richherrera.