I LOVE Bold City Brewery.  My fondest memories of Jacksonville involve Dukes Brown Ale from Bold City at Everbank field during countless Jags losses, Mad Manatee with coworkers at Bold City on Christmas Eve, and every trip I’ve taken to refill growlers with Killer Whale while my brothers ship is docked at Mayport.  Bold City Brewery is the blue collar brewery in town and I always find an amazing collection of happy, energetic people there. 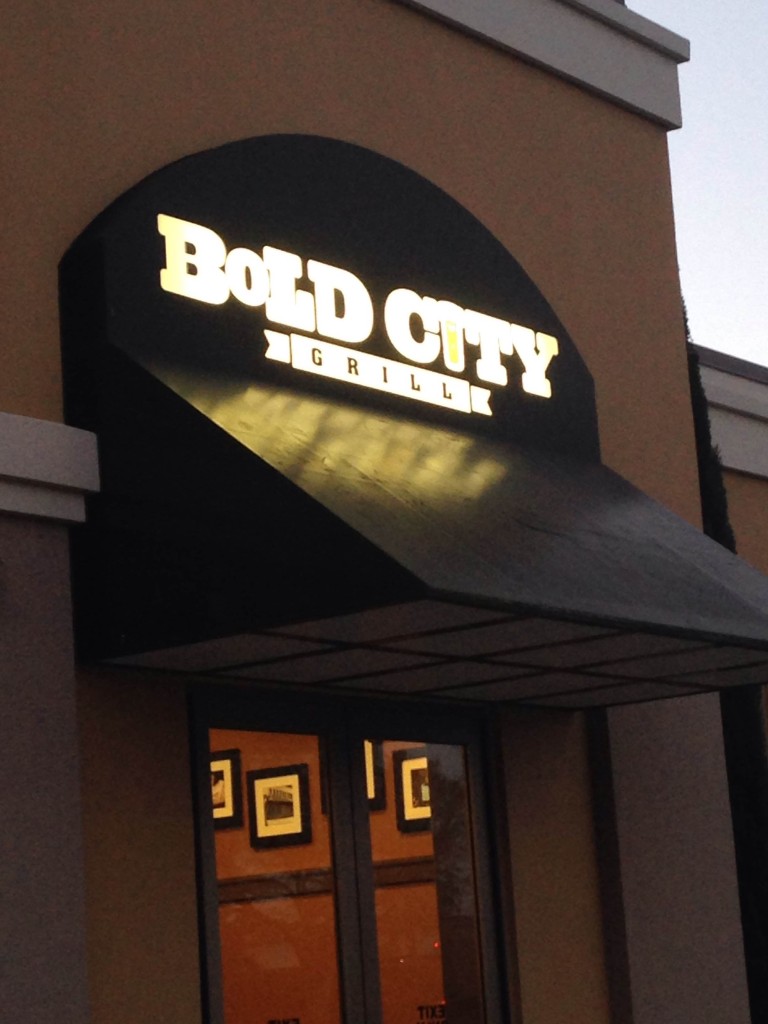 This is NOT a review about Bold City Brewery, though clearly I can’t wait to head back there for a review.  This is a review of Bold City Grill in the Sheraton on Deerwood Park Blvd.  I’m not sure of the relationship between the two.  It feels as though the grill licensed the breweries colors and likeness and built a restaurant around it that’s completely non-congruent with the Bold City Brewery brand.  They have bold city beer on draft but they certainly don’t use that as a menu advantage.
Look, I know it’s at the Sheraton, but it misses the mark in my opinion.  On the wall of the restaurant are sentimental photos of the brewery.  The place is just too prim and proper to be Bold City Brewery.  Display cases of Bold City Brewery glasses, tap handles, and bottles are set up separating the bar from the restaurant.  The effect is sterilizing.
I understand that at some level they have to comply with the standard the Sheraton sets and it’s a shame that the concept of Bold City Grill is so vanilla. 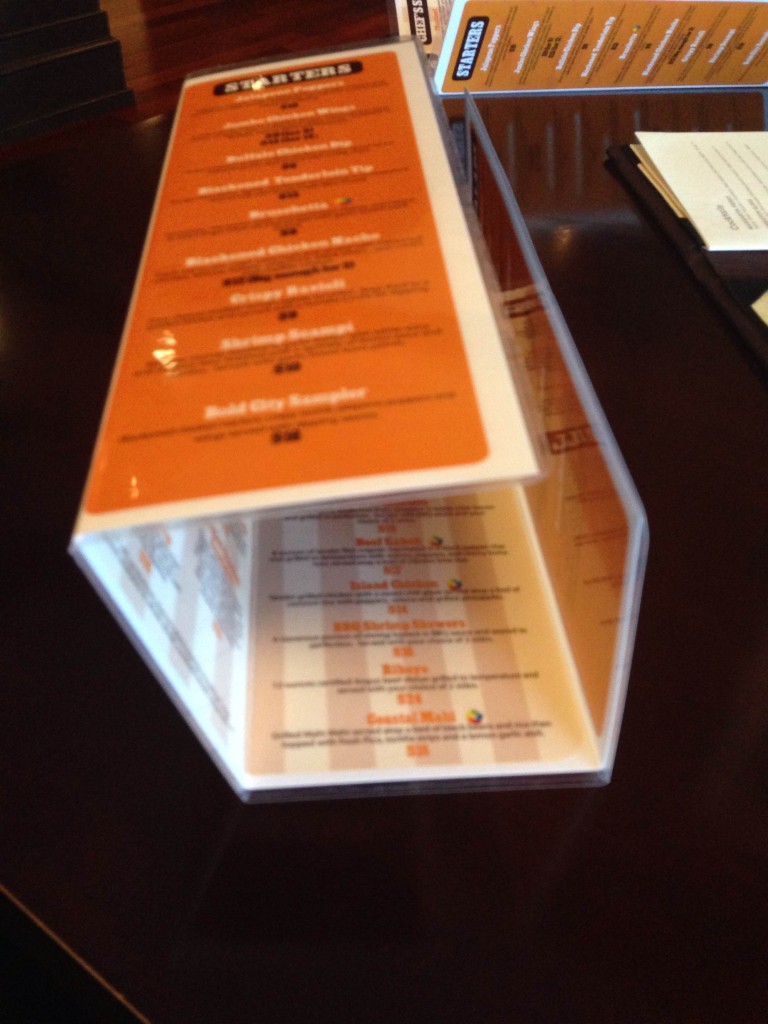 Service: Typically we’d start with food, but in this case I think service is of more interest.  We arrived at 5:30 on a Friday.  I know that’s fairly early, but not like we were interrupting pre-service meetings or anything.  We were seated immediately, and provided with laminated menus.  The lamination was so stiff the menus didn’t actually fold.  Given the attention to design, it seemed like a lazy oversight.  It took quite a while for our waitress to stop by.  Since we were the only 2 people seated in the restaurant there is not a good excuse for a wait like that.  She didn’t offer any kind of menu explanation or mention the fact that the beer on tap is brewed in Jacksonville.  After a minute of reviewing the menu neither of us could find a drink list.  When our water arrived we asked for a drink menu.  You’d think that might be a cue to come back and take a drink order shortly but we had to wait for the food runner delivering our appetizer 5 minutes later to send for our waitress to order drinks.
I’m usually very tolerant of service oversights, probably more than I should be but this was pretty bad.  The saving grace was the music was nice.  I know it’s a funny thing to comment on, but Men at Work Land Down Under is a hard song to listen to and stay grumpy.  If that song were have played back to back we would have heard it 6 times before our food arrived.  We clearly had plenty of time with our drinks to calculate. 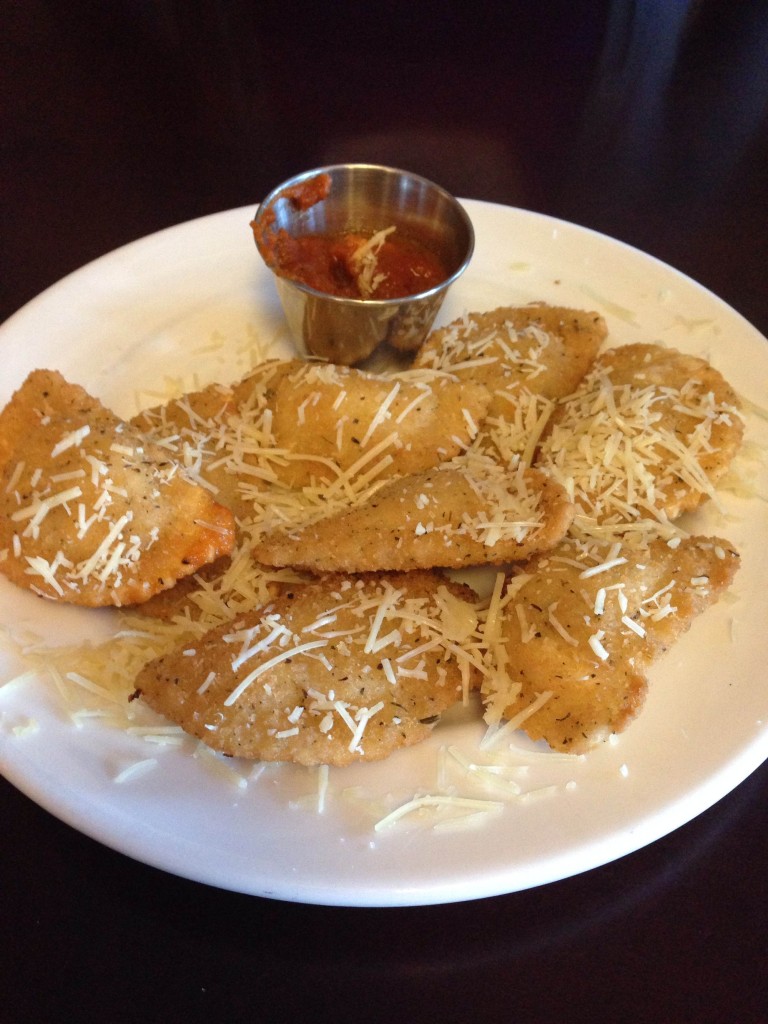 Food: The appetizer we ordered was Fried Ravioli ($9).  It wasn’t very exciting, but it’s just fried ravioli.
The only apparent item on the menu with beer in it was the beer cheese soup.  There may have been others but without an intro by the waitress, hard to say.  The soup was a pretty ugly color because they made use of the Brown Ale from Bold City.  However, the flavor was great.  It was a bit chunkier than you usually expect form beer cheese due to the finely diced veggies in it.  It had a bit of spice and wasn’t as creamy as you might expect.  The crowning point of the soup was a sprinkling of white cheddar popcorn on top.  What a surprising topping!
I tried the crab cake sandwich ($15).  The crab cake was nothing special though the remoulade that came with it was solid.  On a side plate with the remoulade were tartar sauce and a 1/2 lemon in cheese cloth.  It gave the sandwich a higher quality feeling overall even though it was pretty basic.  For a side I ordered tomato slices.  These were thick enough to be enjoyable and had a light seasoning with some basil on top.  A very simple side, but excellent and fresh.
We also had meatloaf with a side of mashed potatoes and corn ($16).  The meatloaf was pretty dense and not crumbly at all.  It contained onion and pepper and some gravy on top.  The potatoes appeared to be made in house while the corn seemed to come from a can. 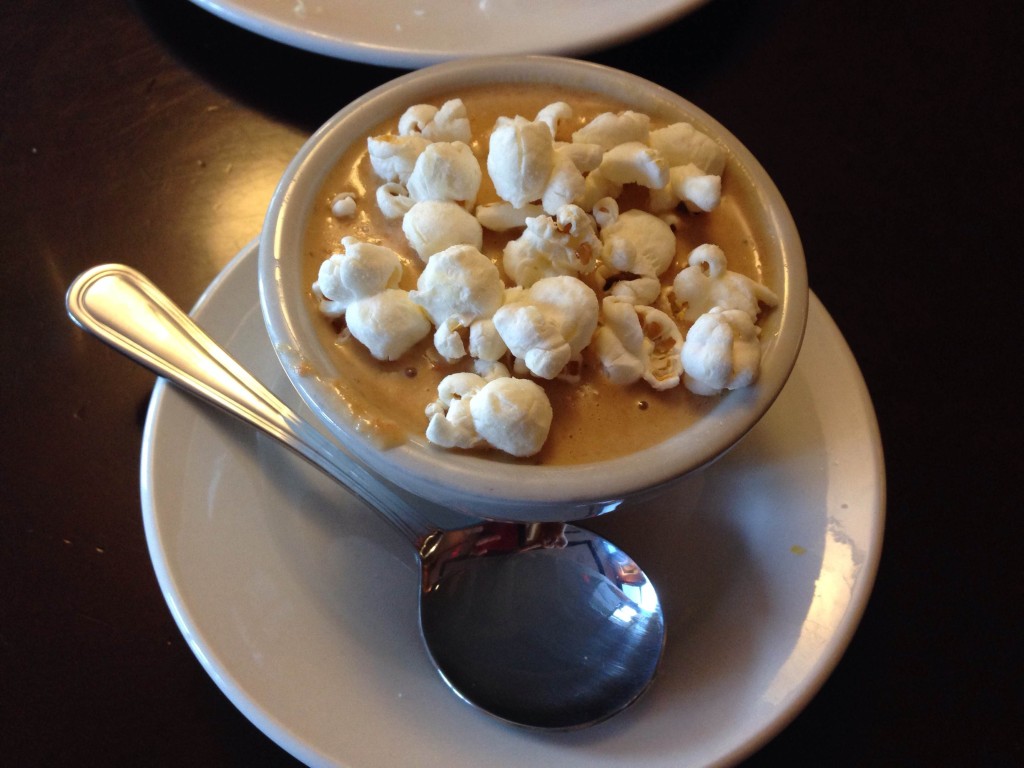 Summary: Bold City Grill is a fine place to eat if you’re staying at the Sheraton and aren’t up for a quick cab ride over to the town center.  Otherwise, it’s a tough place to recommend with so many options close by.  The menu is pretty basic and priced a bit high for what it is, but that’s expected inside a hotel I suppose. 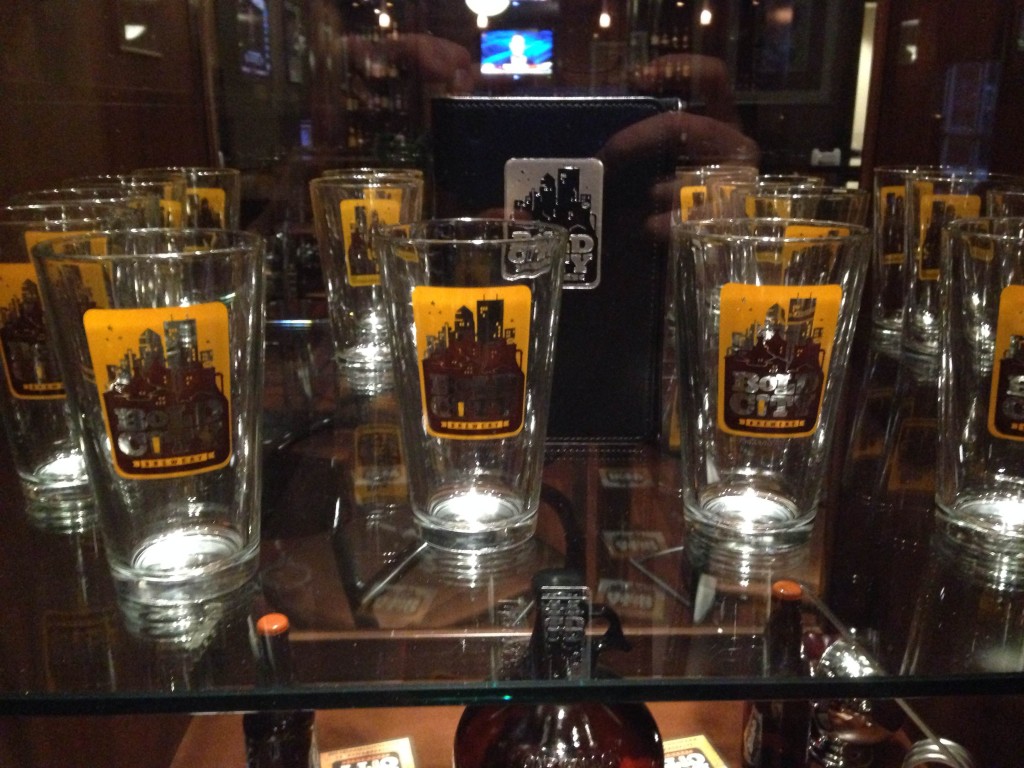 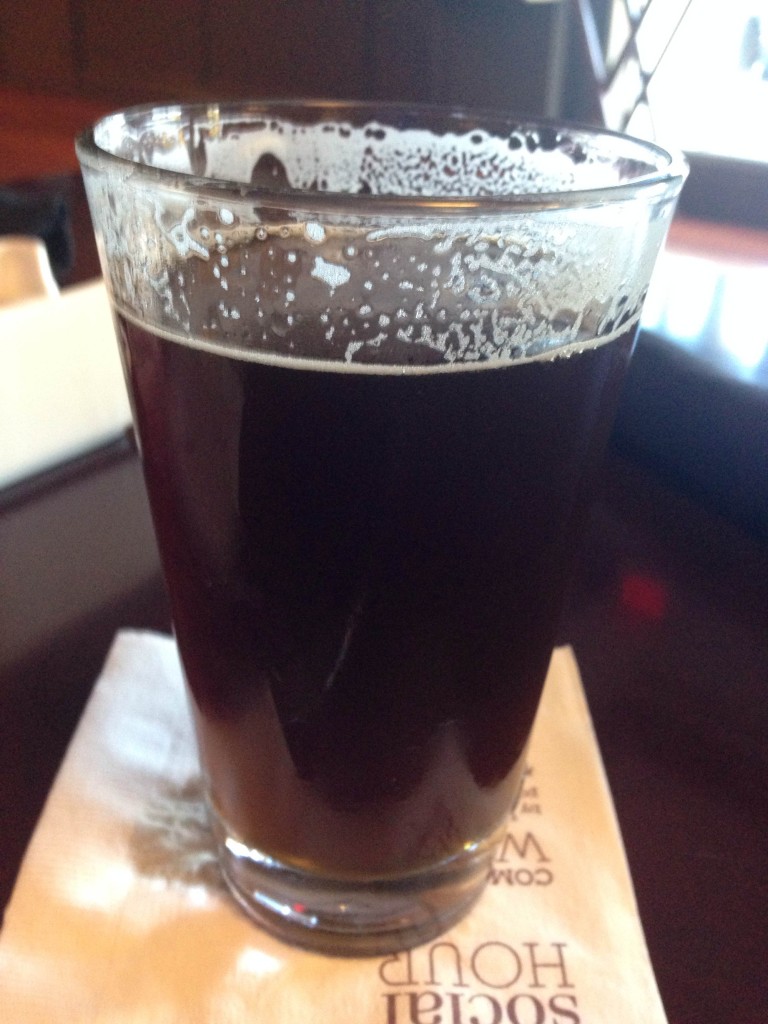 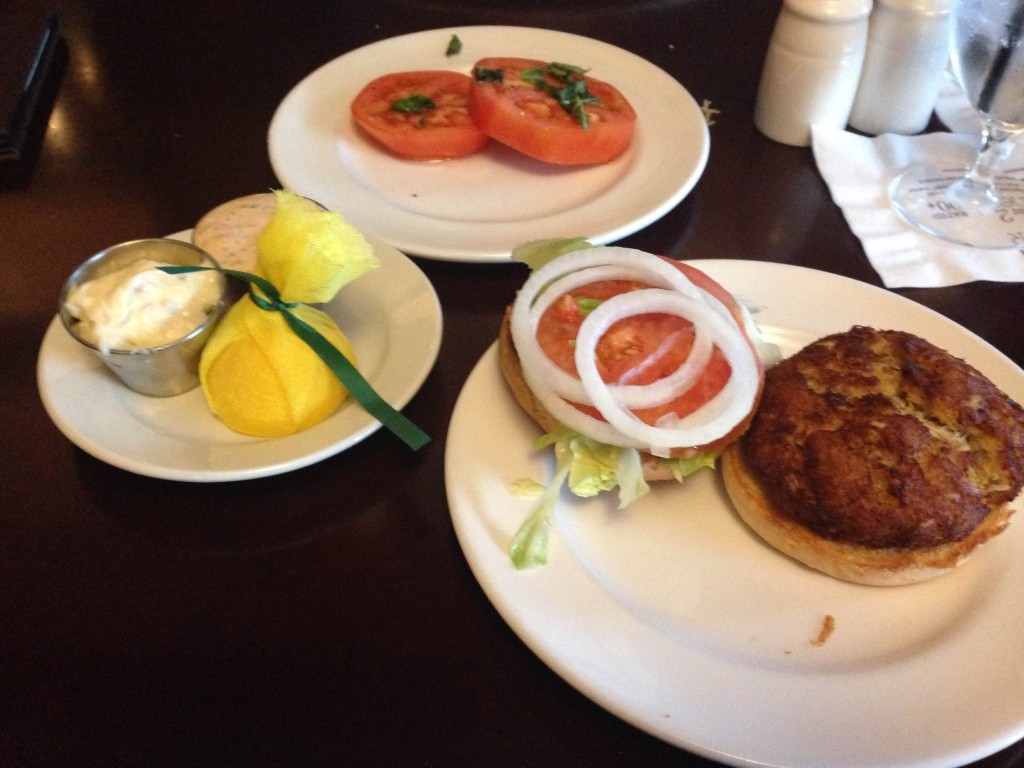 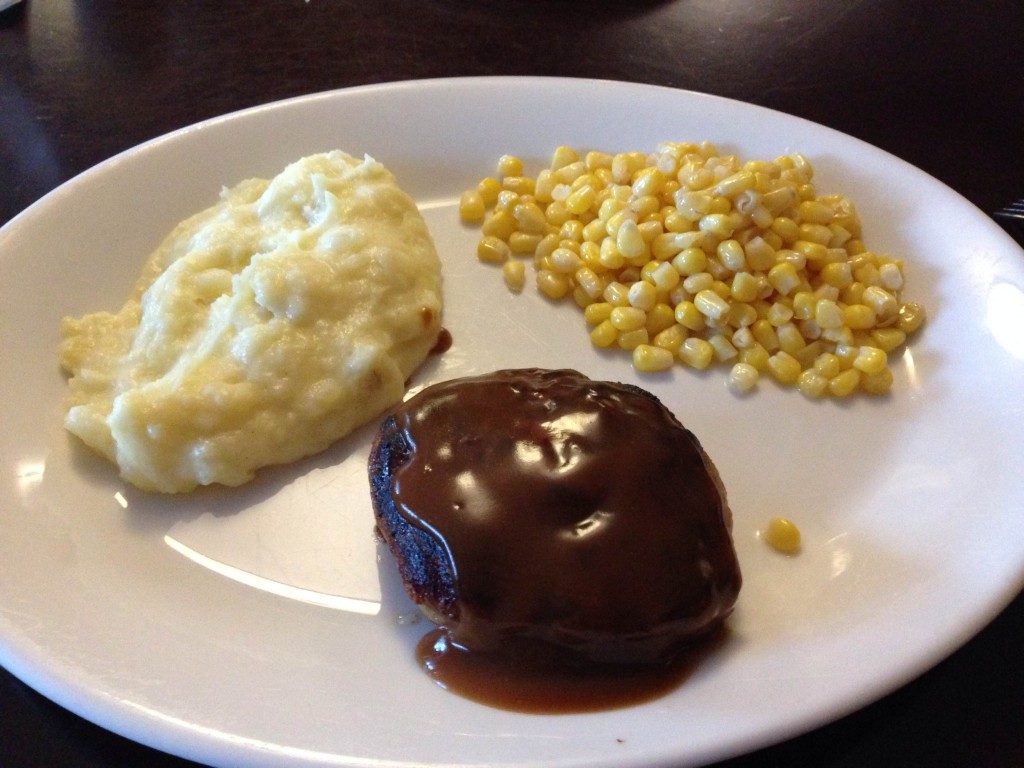