Occasionally we are invited back to restaurants when we’ve had a less than stellar experience. We don’t use a star-rating system or percentage to rate restaurants. Our focus is to give you our review on the particular day we visited and let you, the reader, determine if the pros outweigh the cons. It’s difficult to leave a largely negative review for a restaurant that many love. We wonder what we missed or if we just caught them on a bad day.

This particular situation happened at Tapa That for us. I’m fairly certain we caught them on a bad night. Chef Arielle commented on our original post that they were in the process of cross-training staff during our previous visit and that led to one of our primary complaints regarding timeliness of dishes. We returned on a Tuesday night fairly early so service was outstanding as the place was fairly empty. Because it wasn’t too busy we were privy to conversations our waiter was having with other diners. Wow! These guys are plugged in. Not only can they talk in depth about their menu, they were recommending other restaurants in town that offer different takes and food styles.

Another note about Tapa That we didn’t cover really well the first time around was their vegan and vegetarian menu. These dishes are not afterthoughts. I’d guess 40% of their menu is vegetarian and most of them can be vegan. Further, these dishes all looked really well thought out. Instead of segregating these to the “Vegetarian” section of the menu they notate these with a (V). I like this approach.

On our first visit we noted that the Ham and Brie crepes had mushrooms with strong flavor in them which weren’t mentioned on the specials board or by the waiter when ordering. There are quite a few people who aren’t mushroom fans and might elect not to order them had they known this. On this second visit the dish was listed on the chalkboard as Ham and Brie Crepes with roasted mushrooms. We appreciate that openness to change based on feedback from customers. I’m sure that they have made many changes based on customer feedback and that diner-centric mentality is commendable. 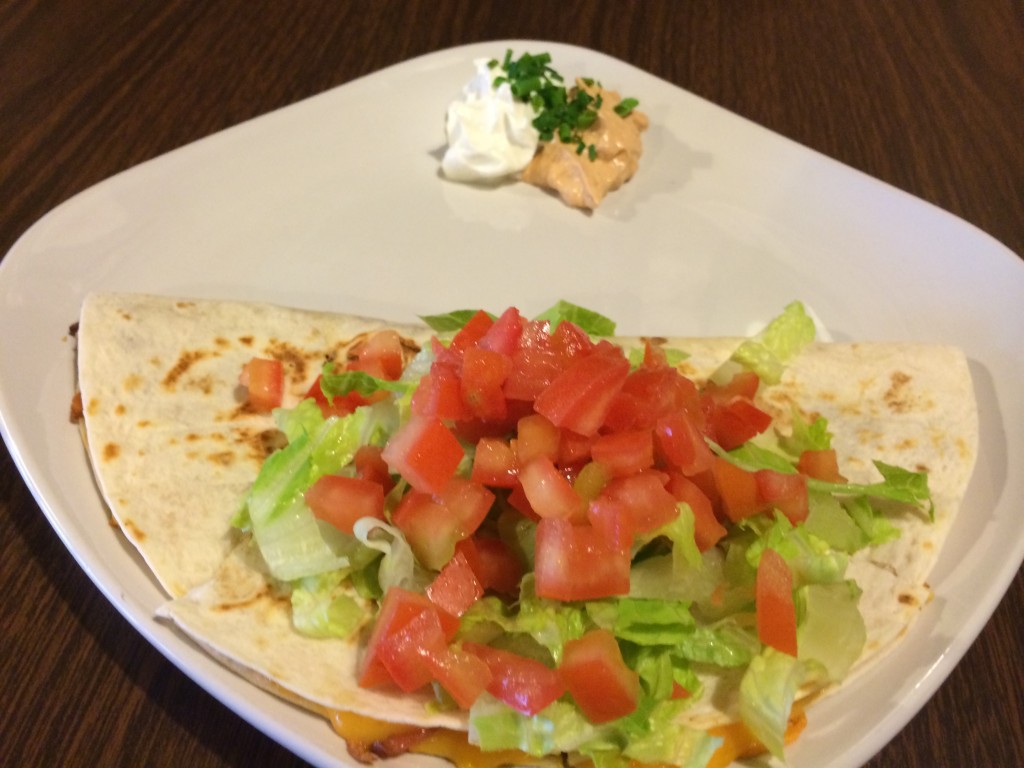 Food: Tuesday at Tapa That is Taco Tuseday which means most tacos are $4 each. We started with coconut chicken tacos ($10 for 2 or $4 each on Tuesday). They were just spicy enough to be enjoyable without being so much so that those who are sensitive to spicy foods would be turned off. We had quite the discussion on the coconut portion. We weren’t quite sure if there was coconut in the taco or if the chicken was flavored with coconut. Regardless the coconut chicken tacos had great flavor. You could just faintly taste the coconut and the cabbage really added positively by enhancing the texture of the taco. If they served you this dish at a taco focused restaurant you’d be thrilled with it. We asked our waiter to surprise us and pick a dish. When you have a waiter that clearly knows the menu this is a good way to try something that you might not ordinarily order. We ended up with braised chorizo in red wine sauce with aged parmesan ($9). The menu description is quite a bit more elegant but I was taking notes fast and furiously as the dish was explained to us. The parmesan cheese is aged 10 months. This is the only traditional Spanish tapa on the menu. It even came with eating instructions: dip, stack, bite. Dip the bread into the wine, stack chorizo and cheese, eat it! If you like a deep wine flavor this is awesome. The chorizo and cheese pair nicely. This dish is priced right and its the food you expect at Tapa That. I’m very glad this dish was selected for us. Definitely try it. Next up we had the BLT quesadilla ($8). There is no shortage of bacon on this thing. All the ingredients that are strong flavors at Tapa That are of really high quality, and the cheddar on this was no exception. With the quesadilla you get sour cream and chipotle yogurt. We were warned to tread lightly around the chipotle yogurt. It offered a similar consistency to the sour cream and it had a very deep spice profile you expect with chipotle. We didn’t use much of it, but I made sure I had some in every bite.
Following the quesadilla we thought we should try some crepes so we opted for the seafood crepes ($12). One of the benefits of overhearing some of the conversation across the restaurant was finding out all their seafood was fresh from Safe Harbor. When Tapa That serves seafood it’s always fresh from Safe Harbor. It’s nice to see local restaurants using fresh local seafood. I’m fairly certain the cheese on top of the crepes was Mozzarella. The crepe filling had that nice sweetness. The seafood in it was tasty. We are fans of this dish. Ready? Here comes our complaint in this review. The balsamic reduction on the salad was too strong. Duh, right? balsamic reduction. We had the same salad on our first visit and the balsamic was great. I’m not sure what happened this time. I was thinking maybe it was a type of dressing I hadn’t had before so we asked the waiter and he confirmed it was balsamic. If you like black licorice you’ll probably love this dressing. I hate black licorice so for my taste it was a bit of an unwelcome surprise. On our previous visit Tapa That told us the banana beignets that were listed on the chalk board weren’t available. They promised this time they’d have the beignets. We had the banana beignets ($4). I’m glad they did because we loved them. The banana was really nicely integrated in to the dough and I’d almost categorize these as a cross between banana bread and beignet. Running out of items seems to be really common at Tapas restaurants. Its probably to be expected and that’s no big deal. We feel however that it would be much less upsetting if restaurants would remove the items from the specials board or let diners know when they’re handed their menu rather than when they request the item. 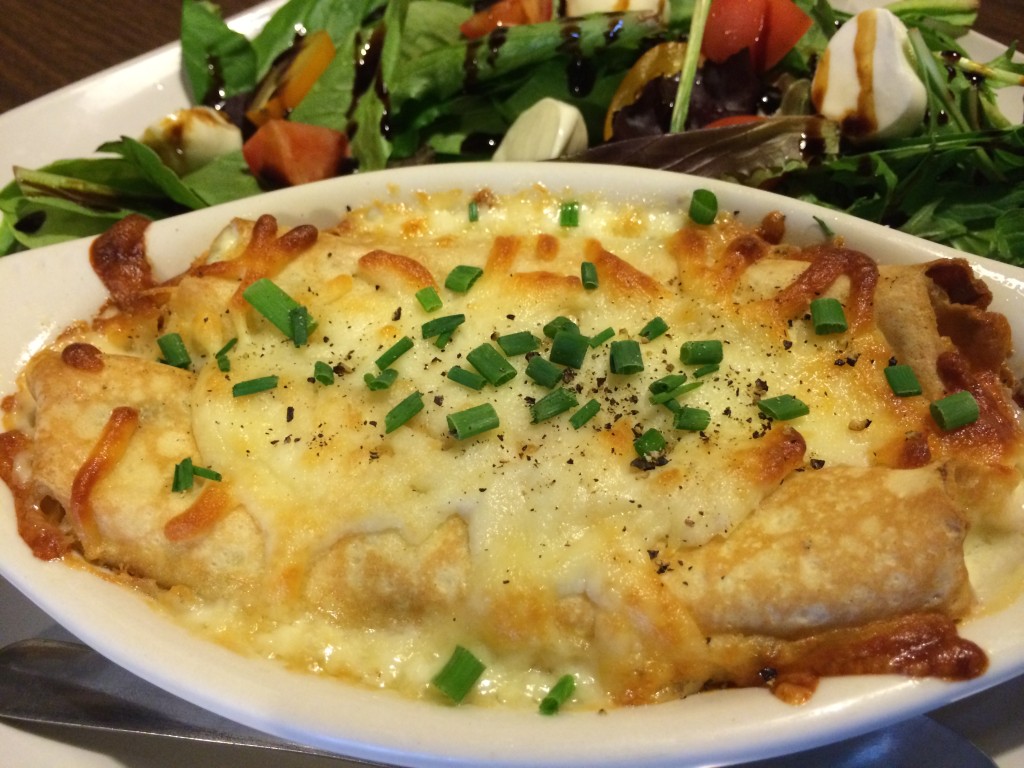 Service: Service on this trip was fantastic, but we knew it would be. They were expecting us and it was early on a Tuesday. I’m not trying to take anything away from the service as we saw great interaction from the staff with other diners. 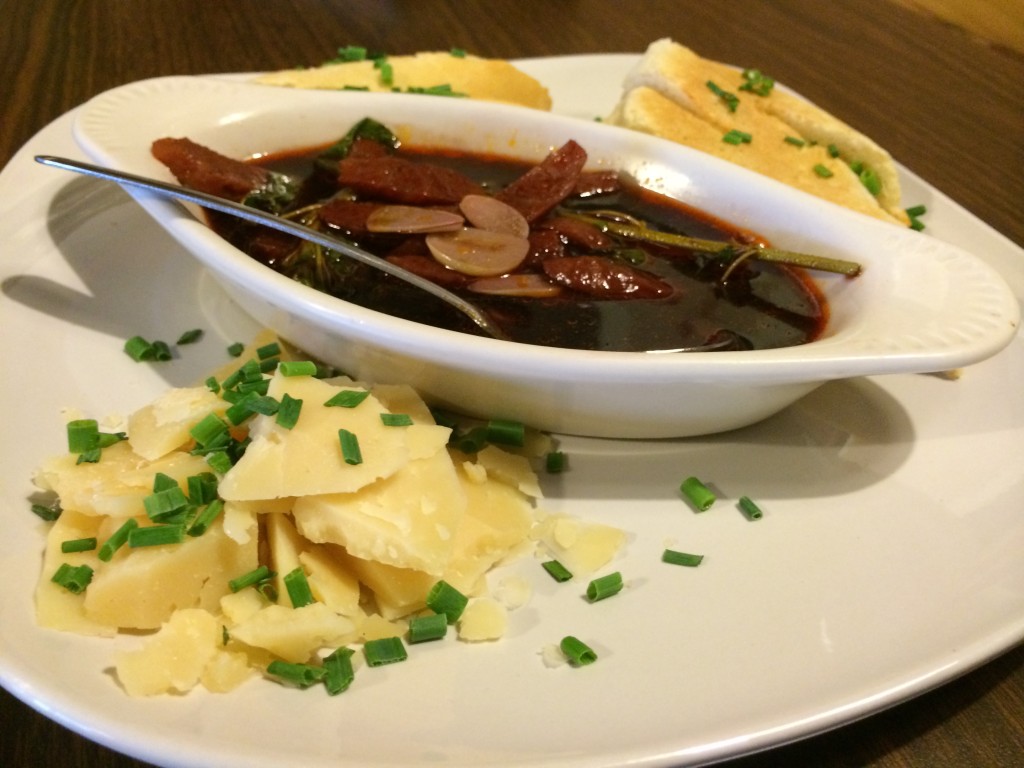 On our first visit the menu at Tapa That had a story about the realization of the dream of a brother and sister running a restaurant together. If that story was as evident at every meal at Tapa That as it was during this visit Tapa That would clearly be one of Jacksonville’s hidden gems. 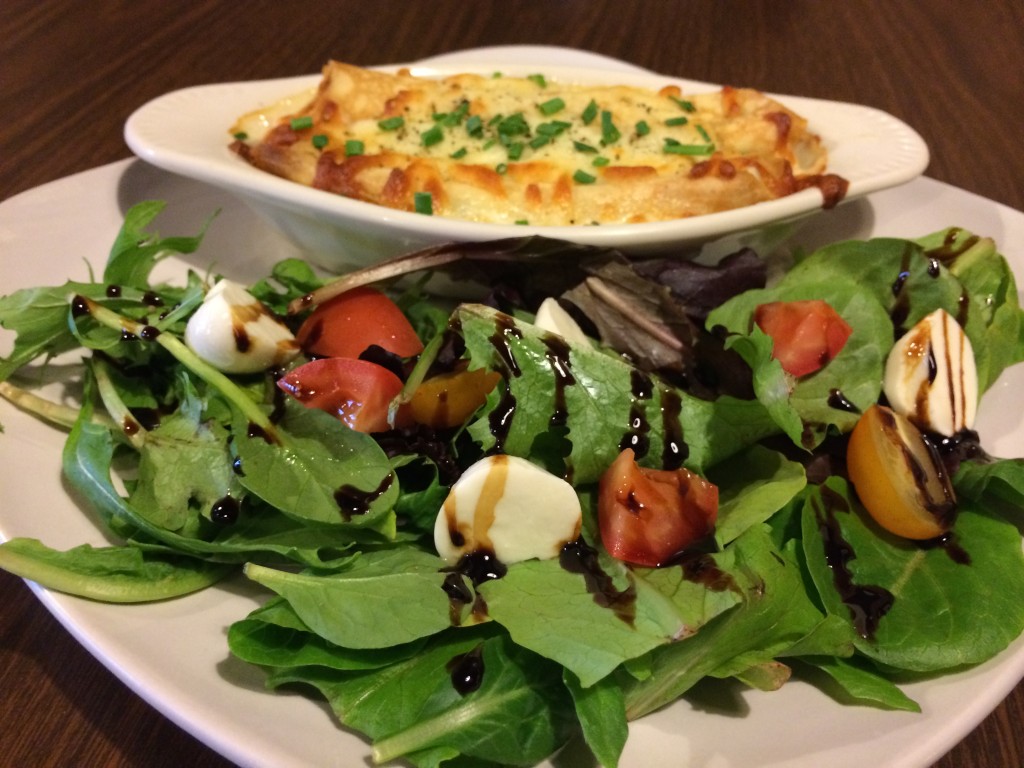 Tapa That – Salad with Crepes 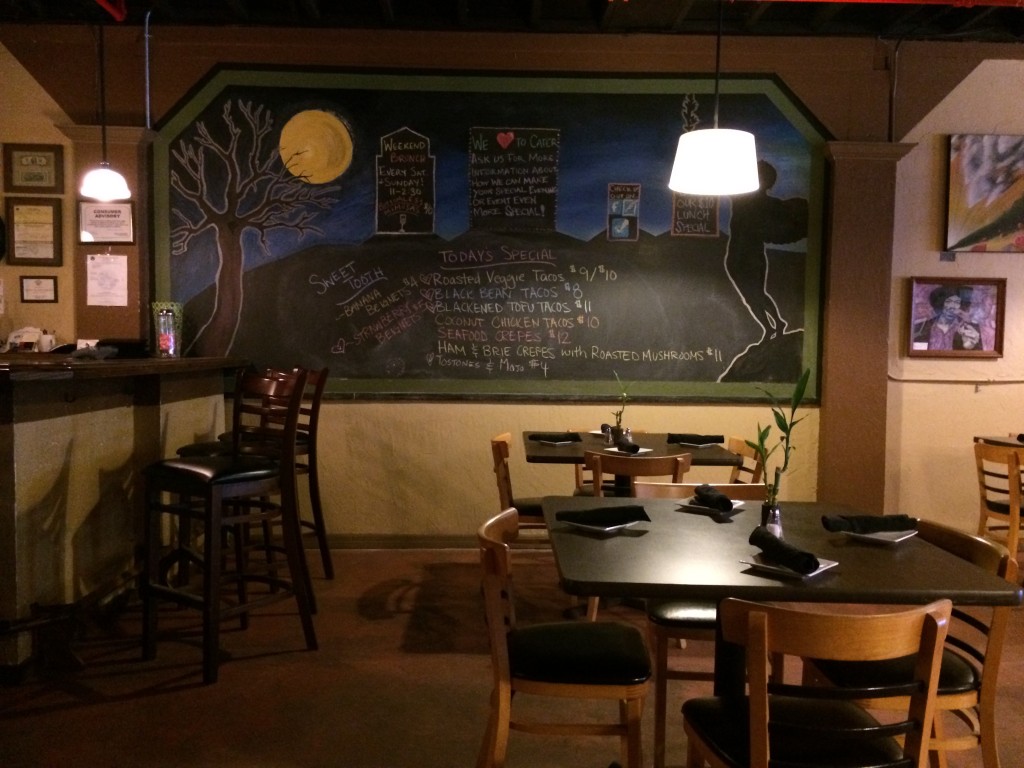 Tapa That – Menu Board 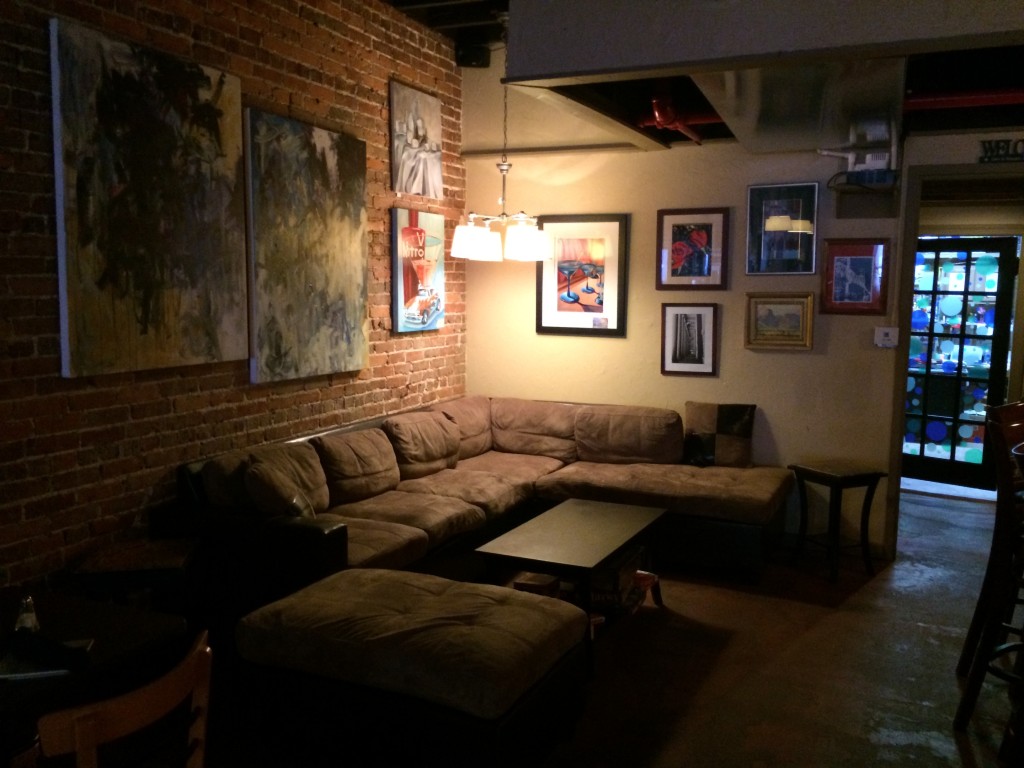 Tapa That – Hang Out 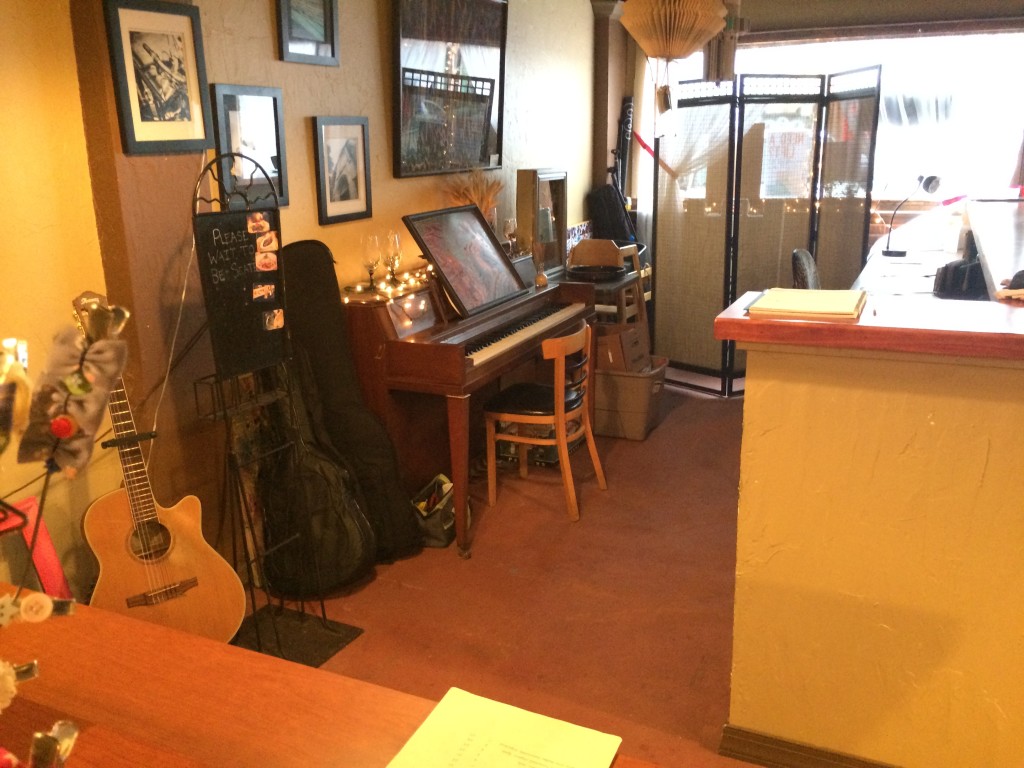 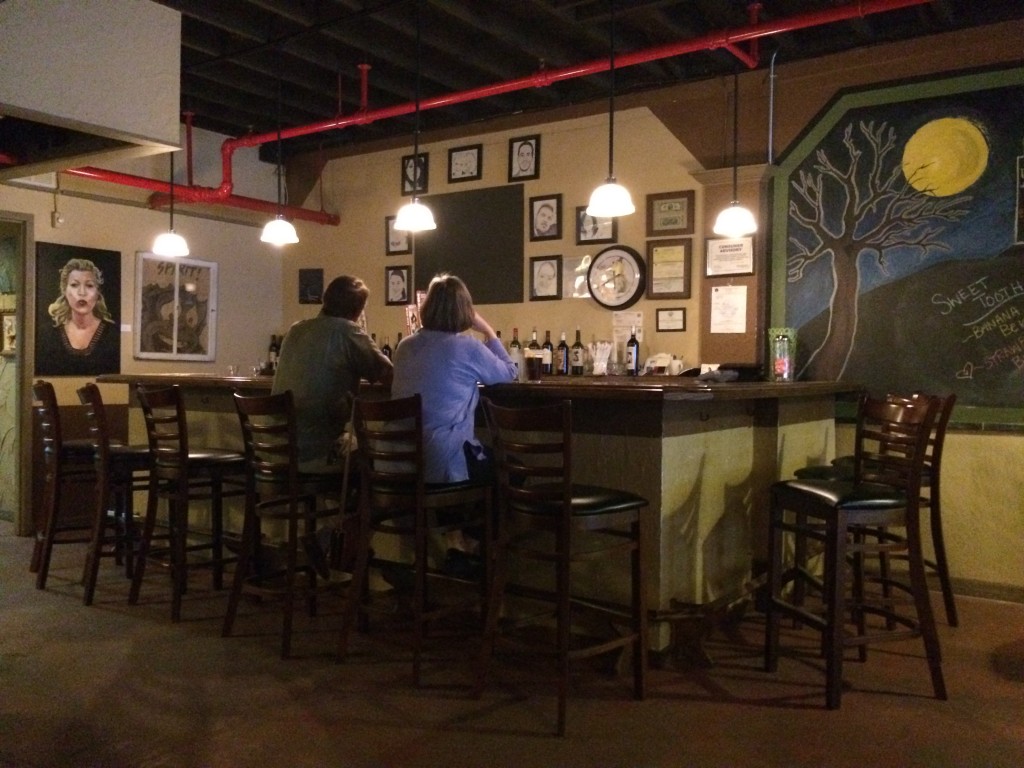