Overview of restaurant and concept: 13 Gypsies is a traditional neighborhood bistro focusing on tapas and small plates.  They buck the prevalent trend of fusing different style of food and work hard to produce food authentic to the styles and flavors of their countries of origin.  The restaurant is a quaint little spot on Stockton Street in Riverside.  It’s one of the smallest and also most popular (for its size) restaurants in Jacksonville.  They have only 7 tables inside and two outside.  They’re spaced well though so you don’t feel crammed in there.  Before this trip to 13 Gypsies I’d tried twice previously to get a same day reservation and was told there were none available at the times I could make it.  You definitely will have to have a reservation to get a seat. You probably will need to call a couple days in advance to get one if you’re particular about the time you dine. 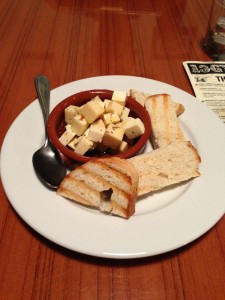 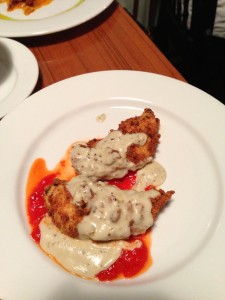 Food: I sat down and ordered a coke. A can promptly arrived.  Canned cokes never taste as good.  I’m convinced they’re used to be able to charge for every soda you drink.  While most of us probably shouldn’t drink more than one soda per meal anyway, being charged for each one is just annoying and a cash grab. 13 Gypsies does just that.
Everything on the menu is tapas so you’ll want to order a few things and try a variety of items. We started with the Mushrooms Sevilla($9)- Mushrooms sautéed with garlic and cream sherry served with goat cheese toast. They had a good strong salty flavor complemented by a nice touch of Rosemary you could easily taste. These were some of the better mushrooms I’ve had. Next up were the Marinated cheeses($9)-Queso Blanco, Romano and Asiago cheeses marinated in Olive oil, rosemary, black pepper, crushed olives, and roasted red peppers. Served with peasant bread.  If I got a bag of mixed cubed cheeses from the grocery store, dumped them in a dish, poured some olive oil over top of them and served them it would be pretty close to this dish. I’m a huge cheese fan and it’s hard to disappoint me when it comes to cheese but they managed to find a way to do it. We followed this course with the Shrimp Piri Piri($10)- shrimp in a traditional spicy Portuguese ginger and lemon sauce.  These were great! The sauce made the shrimp.  Ginger is a very strong flavor that can sometimes overpower a dish. Not this time. The ginger and lemon flavors blended nicely with other spices in the sauce to give a nice medium flavor without too much spice. Definitely try these.
I tend to love broccoli soups but this wasn’t the case with the next dish the Broccoli and goat cheese($7)- A warm puree of broccoli and vegetable broth topped with goat cheese.  I expected a thick soup based on the word puree being in the description. This one was about the consistency of baby food.  I was definitely not a fan. It was fairly mucky and didn’t have great flavor. The goat cheese was a nice touch though.
The meat of the day was the Chicken Gorgonzola($10)- Fried chicken tenderloins on red pepper coulis, topped with a gorgonzola cheese sauce. The chicken was delicious!!! I could come to 13 gypsies just to eat this chicken. Hand breaded chicken tenders covered in gorgonzola sauce over top of red pepper coulis. The red pepper coulis(translation: red sauce for the uncultured out there) had good flavor and was the perfect complement  to the decadent rich and creamy gorgonzola sauce. Wow! The final course was 13 gypises take on bread pudding. Hot circular bread pudding rounds sat in a cool sauce for a nice contrast between temperatures. It was delicious.  The sauce had a strong brown sugar flavor that really added something special.  I was a fan. 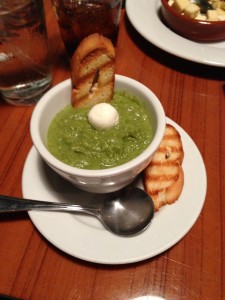 Service: The service was solid.  We were seated promptly when we arrived and the waitress took good care of us.  One of the annoying things that happened was they were out of two different items we tried to order. After the meal I went and looked on their website and saw they warn guests that they do run out of things since everything is made fresh daily. Dine early if you want to make sure they still have a specific item you’d like. At the end of the meal the waitress asked if there was a problem with the broccoli puree since I hadn’t eaten much of it.  I shared that I just didn’t like it.  Since it’s such a small restaurant I could sort of hear her discussing it with the chef but nothing came of that discussion. A lot of restaurants would have taken it off the bill.  I don’t think that’s to be expected though. I chalk not liking it up to personal preference. It might have just been a texture thing for me.

Editors Note: If you drink while dining here, be careful…completely sober I almost walked into traffic when we left.  Had I had a few glasses of wine I might have ended up on the hood of a Mazda.