The Hilltop is located in a beautiful Victorian style mansion surrounded by giant oak trees. It’s a pretty incredible location tucked away up a hill away from the road. Getting out of the car and walking up to the restaurant you almost feel like you’re walking back in time into an old Florida Mansion. The Hilltop is one of the most popular places in Florida for weddings and wedding receptions. I’m told the food options for weddings there are top notch. As far as ambiance in the Jacksonville area the Hilltop can’t be beat. With its antique furnishings and live piano music the dining room at the Hilltop personifies romance. Growing up in Orange Park I was always told the Hilltop restaurant was the nicest local restaurant in town. Until this week I had never been. After this visit I can confidently say this would be my first choice of places for a romantic night out in Orange Park. Unfortunately it wouldn’t be my first choice or even my 5th for a good steak. 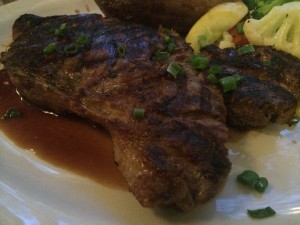 Food: All of the meals come with a house or Caesar’s salad and choice of potato. We tried the house salad. It was exactly what you’d expect from a basic house salad- Iceberg lettuce, tomatoes, onions. The balsamic vinaigrette dressing was very good. For our first entree we tried the 14oz New York strip steak topped with port wine demi glace ($27.95). The steak was ordered medium and it came out noticeably medium rare. They took the steak back, cooked it longer, and then delivered it cooked perfectly medium. The steak was pretty tender. However, it lacked seasoning and was very bland. Given that the New York strip is a cut of steak prized for its flavor and tenderness, getting a bland NY strip is doubly disappointing. One of the worst steaks we’ve tried. It came with mixed vegetables and we chose a baked potato. The vegetables were decent steamed veggies and the baked potato was fine. The other entrée we tried was the Chicken Piccata-Breast of chicken sautéed in lemon caper sauce with artichokes and diced tomatoes ($17.95). It was decent but nothing to write home about. Overpriced for the quality. For dessert we tried the dreamsicle cheesecake. It was exactly what you’d expect it to be. A wonderful cross between the flavor of a dreamsicle and a traditional cheesecake. It was by far the highlight of the meal. 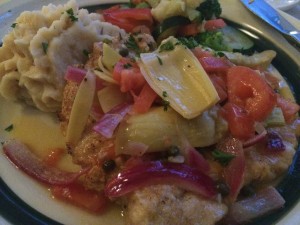 I don’t mind paying a high price for a truly exceptional fine dining experience with great food. However the sirloin at Golden Corral tasted better than the NY strip at The Hilltop and I’ve had better chicken piccata for $12. Also, we should note that the menu posted online is $2 to $9 cheaper than the actual menu on nearly every item. I’d like to attribute this to their website being poorly done and outdated but who knows? Who has a website without an email address listed anywhere anyways?

Service: The service was okay. The waiter was fairly attentive and had a bit of a snooty air about him like you might expect from a restaurant purported to be the nicest in town. He was somewhat friendly. He was knowledgable about the menu. Although, a menu that basically offers a few steaks, a couple chicken dishes and some pastas isn’t all that hard to be knowledgeable about. 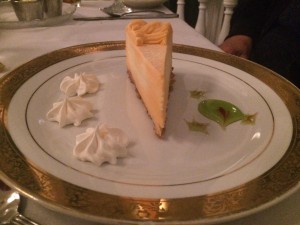