I consider myself to be a pretty adventurous eater.  I like to eat different types of cuisines and I’ll try just about anything once.  So I’m just a little embarrassed to admit that until recently, for whatever reason, I had never really ventured into the realm of Indian food.  I had a basic knowledge of a few classic Indian dishes, but had not really tried a ton of Indian food.  And that was a shame, especially since there are a ton of Indian restaurants in the area (especially in the Baymeadows and Southside area).  After a recent visit to Zesty India, in a shopping plaza on Baymeadows near 295, I am officially an Indian food convert.  I ran across Zesty India on Instagram and was immediately blown away by how gorgeous their food looked.  The saying goes that “You eat with your eyes first.”  Well, my mouth was watering after seeing photos of their beautifully plated food and I couldn’t wait to check them out. 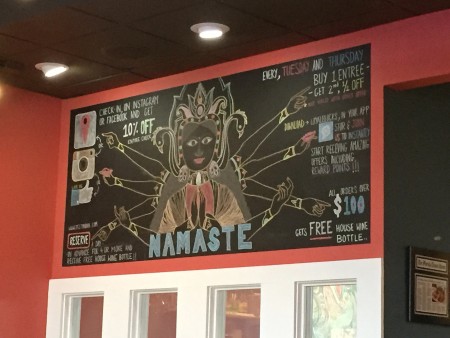 We walked in, were greeted warmly, and seated right away.  The atmosphere really impressed us…it was warm and inviting and felt much more upscale than we had expected.  The chairs were plush and comfortable and the artwork was understated and simple.  The decor reflected Indian culture, but without being kitschy or overwhelming.  We liked Zesty India right away. We took a while to look over the menu because there were so many different things we wanted to try.  Our server brought over a basket of crispy papadum (sort of like a large, savory, disc-shaped cracker) and dipping sauces for us to snack on while we were deciding.  The menu was extensive, but really well organized.  The detailed descriptions and the notations at the top of each page helped us figure out just what we wanted. 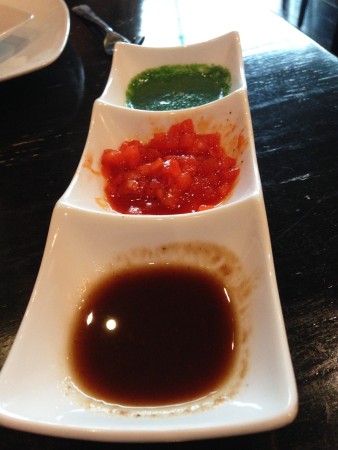 We started out with an order of warm, chewy Roti ($2.50) and a Vegetarian Appetizer Sampler ($11), which included a couple of samosas, paneer tikkas, and hara-bhara kabobs.  Our food came out quickly and we were ready to dive right in.  The vegetable samosa pastries were filled with potatoes and peas.  They were seasoned well and fried to crispy perfection.  The paneer tikkas were just ok.  If you’re not familiar, paneer is a firm cheese common in Indian cooking.  It is dense and has a texture similar to that of tofu.  The paneer tikka that we had was marinated in a spiced sauce and then pan-seared.  It had a good taste to it, but just wasn’t as flavorful as we had hoped.  It came across as a little bland, especially at the center of each wedge where there was not as much of the seasoning.  Our favorite thing on the appetizer plate were the hara-bhara kabobs.  Hara-bhara kabobs are a classic dish in Indian cooking.  They consist of spinach and peas, mixed with herbs and spices and then shaped into patties and fried.  They were so good.  The spinach flavor was great and the spices were perfect, but the best part was the crisp outer crust.  These disappeared from our appetizer plate pretty quickly!  For being two devout meat-eaters, we were huge fans of the vegetarian appetizers. 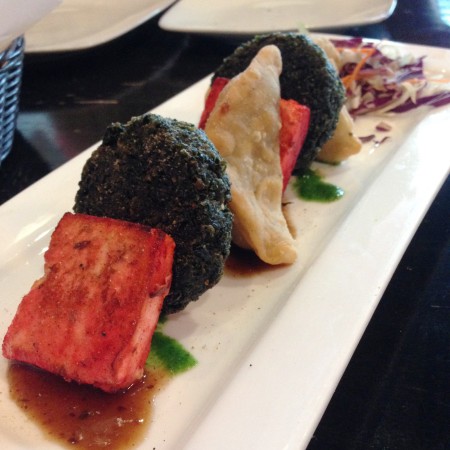 For our entrees, we had Lamb Korma with Naan ($14.95) and Butter Chicken with rice ($13.95).  Both were amazing dishes.  The meat in the lamb korma was juicy and tender, and the combination of spices in the creamy sauce was perfectly balanced.  There was layer after layer of flavor and just the right amount of spiciness.  The menu described the dish as having “flavors of dry fruits and cream” and those flavors definitely came through.  The lamb korma had a deep, earthy flavor to it.  When paired with soft, warm naan flatbread, this dish could easily be described as Indian comfort food. 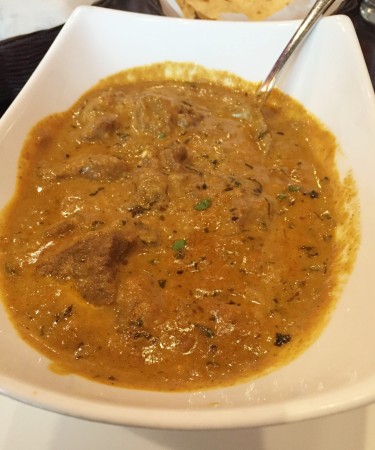 The Butter Chicken (also known as Murgh Makhani) was just as comforting and delicious.  The sauce was rich and tomatoey with an incredibly flavorful combination of spices and seasonings.  The flavors of cloves, cinnamon, and fenugreek shone through and really complemented the thick, savory sauce.  It made for a great nutty, smoky flavor that I loved.  And the shredded chicken was mouthwatering and juicy.  It was integrated throughout the sauce, which was nice because I was able to enjoy some of that delicious chicken with every bite I took. 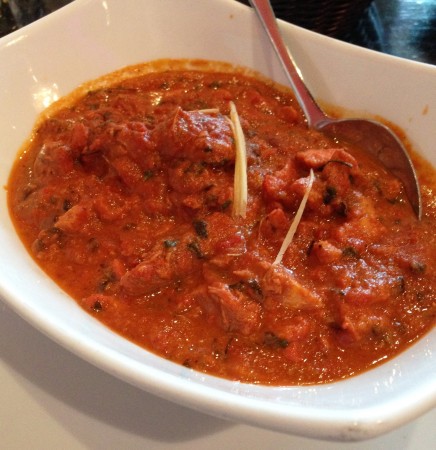 At this point in the meal, we were fat and happy.  Our entrees were amazing and we were stuffed.  But, we really wanted to try some dessert too.  We had seen the Trio Kulfi ($4.95) on the menu and had also seen a photo of it on the Zesty India website.  It looked and sounded tasty, so we knew that was the dessert for us.  Unfortunately, what our server brought to our table was not the dessert we were expecting.  The menu described the Trio Kulfi as a “multi-flavored” dessert with “flavors of mango, pistachio, and malai.”  The photo of the dessert on the website also reflected the same thing…a multilayered, creamy, plated dessert.  Instead we received a mango-flavored popsicle-like dessert.  Now, we know that it is pretty common for kulfi (a creamy Indian dessert similar to ice cream) to be served on a stick like a popsicle.  So, we weren’t really disappointed to have it served that way rather than on a plate.  We were mostly disappointed that we didn’t get to enjoy the multiple flavors so beautifully described in the menu.  I’m not sure if our server just mistakenly brought us the wrong thing or if the description and photo of the dessert were just that inaccurate, but this was a bit of a bummer.  Don’t get me wrong, the mango flavor on its own was fresh and creamy and we enjoyed it anyway.  But we really missed out on the “trio” flavor experience that we were expecting when we ordered the Trio Kulfi. 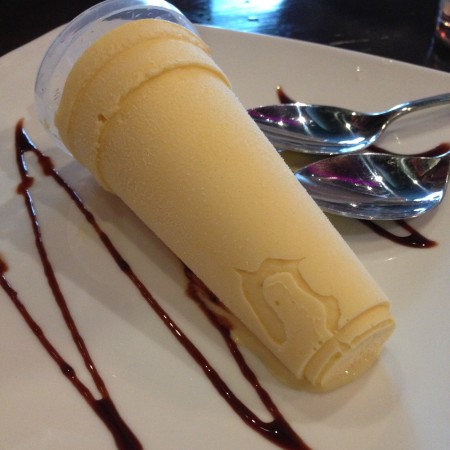 So our appetizers were amazing, our entrees were incredible, and our dessert was interesting.  The only real negative about our meal at Zesty India was that our service was a little hit-or-miss.  Our server was friendly and energetic, but seemed a bit unfamiliar with a few things on the menu.  I ordered their red sangria because it sounded delicious.  A few minutes later I was informed that they were out of the red sangria, but had a white sangria instead.  Great, I’ll take it.  But what I ended up with was definitely not sangria; it was Chardonnay.  Ok then, not really what I wanted, but I like Chardonnay so I drank it because…wine.  Then there was the confusion when it came to dessert.  What we ordered was definitely not what we got.  But again, we decided to eat it anyway because what did arrive at the table was still pretty good.  And when the rest of our meal was so flawless, it was easy to let a couple things slide.

Overall, we love Zesty India and can’t wait to go back.  As an Indian food newbie, it was a great introduction to the cuisine.  The menu at Zesty India is accessible and not overwhelming.  They have something to appeal to pretty much everyone, including vegetarians, vegans, Indian food enthusiasts, or just people (like me) who may not be too familiar with Indian food.  But Indian or not, the food from Zesty India was just plain good food.  I may not have been a huge fan of Indian food before this visit, but I do like great food and this meal certainly fit the bill.  But just a warning… don’t make the mistake of drooling over photos of Zesty India’s food on a Monday.  Zesty India is unfortunately closed on Mondays, so save your cravings for Indian food for the other six days of the week. 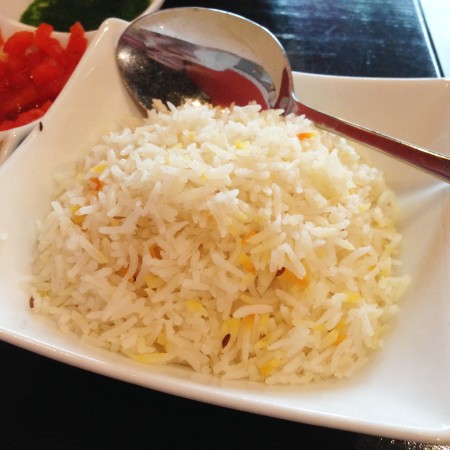