I love spring.  It’s probably in my Top 4 favorite seasons.  Spring is where I can finally stop wearing a light jacket with my shorts, only use the AC for half a day, and leave work at 6pm with some daylight left.  But most of all, with the arrival of spring, comes the arrival of crawfish season; those delectable little mud-dwelling, fresh water, miniature lobsters.  Peak crawfish season usually runs from March through about mid-June.  And on this day, I had a fever.  And the only prescription is more crawfish.

The Fish Co. has a loyal following around the area and for good reason.  I’ve been to The Fish Co. in Atlantic Beach a few times in the past and have always been pleased with their food and service.  When I heard they were running a crawfish special, I was very excited.  It’s not on their menu year-round, and there’s not specific stop date for the special, so I knew if I didn’t go now, I’d probably miss it.  There are a few other places more inland that serve crawfish, but there’s just something about eating fresh seafood close to where they were probably caught…it’s a “circle of life” kind of thing. 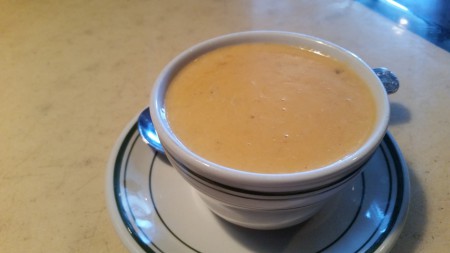 We were greeted and seated without much fuss.  We came on a late Sunday afternoon.  It was after the after-church lunch rush, but just before the dinner crowd.  The service is always friendly and tonight was no exception.  For an appetizer, I noticed the soup of the day was Savannah Crab Soup, one of my favorites.  We decided to order a cup.  The Fish Co.’s version is very good.  There were nice size chunks of sweet crab meat, and the consistency was perfect – smooth, velvety, and delicious.  It left a nice coating on the tongue, leaving you tasting the soup long after the initial spoonful has been savored.  There was also a bit of heat to it – mostly back-end heat.  It’s the kind of spicy heat that hits you as you swallow and you feel it hit the back of your throat.  The heat wasn’t overpowering; it was just enough to keep you coming back for more. 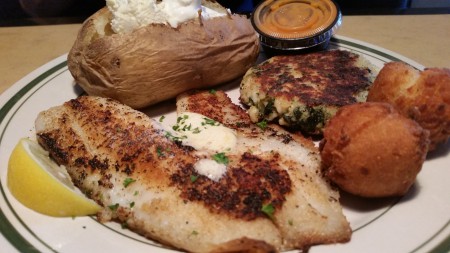 My dining partner is not a big fan of crawfish.  She used to play with them as a child growing up in the backwaters of Alabama.  And she doesn’t play with her food.  So she ordered the grilled tilapia.  The tilapia was grilled flawlessly; it was tender and flaky.  It was topped with a nice garlic butter that enhanced the light flavor of the fish.  It was served with a baked potato, hush puppies, and a spinach cake.  A spinach cake is a cornmeal cake with spinach and pan fried until crunchy, golden brown, and delicious.  It tasted fantastic.  I would’ve switched the hushpuppies with another spinach cake if I could.

But enough about these side players to tonight’s dinner.  Can we talk about crawfish for just a second?  Who was the first person to look at this bug looking creature thing and think, “You know what would be good? If I boil you, rip you in half, suck out your brains, peel off your protective shell and eat your tail.  I bet that would be delicious.”  I mean, someone had to be first, right?  Well, whoever that brave person was, Thank You for your service to humanity.  The Fish Co.’s crawfish special is unpretentious.  Order by the pound.  And for only $10 per pound for fresh, in season crawfish, it’s not a bad deal considering a bag of frozen crawfish at your local Mega Mart can run anywhere between $7 – $9 per pound. 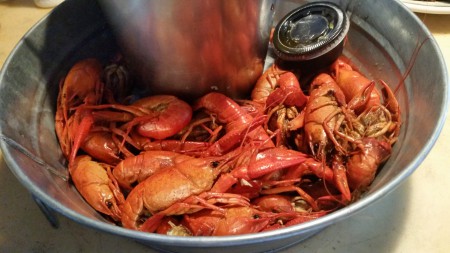 Their crawfish is prepared simply, boiled in Louisiana Boil seasoning, crustacean’s best friend.  Fresh and in-season will always taste better than frozen.  These crawfish were probably alive this morning before finding their way to my plate.  And they didn’t have to endure a plane trip across the country encased in ice.  The quicker you get something from the water to your plate, the better it’ll taste.  And these crawfish tasted delicious.  They were boiled perfectly.  Not overdone and rubbery and not waterlogged.  I ordered two pounds.  They were served in a mini galvanized steel tub with a matching steel bucket for the shells.  There would be no dainty eating tonight.  I grabbed a crawfish, looked it dead in the eye and said, “Get in my belly.”  Then I ripped it in half, sucked out its brains, peeled off the protective shell and ate the tail.  Some of these crawfish were huge.  Some were large enough for me to get a little bite of claw meat.  The Louisiana Boil seasoning didn’t overtake the sweet taste of the crawfish.  Even the tomalley, something I normally discard when eating crawfish, was tasty.  The crawfish was served with a little dipping bowl of clarified butter.  But the crawfish tasted so good on their own, I forgot about the butter.

So if you’re a crawfish lover, such as myself, and you don’t mind getting a little messy in the company of others, get over to The Fish Co. in Atlantic Beach while they still have the crawfish on special.  Go.  Now.  While you still can.

Rich likes to think of himself as a ‘pig with lots of adjectives,’ that is, he loves to eat and he loves to write.  Eating for him is more than just sustenance.  It’s about the experience.  He hopes readers can share in his experiences as he continues to eat and write his way through Jacksonville.  You can follow him on Instagram @richherrera.