In the old space Taco Lu used to occupy a new seafood restaurant Marlin Moon Grille has taken up residence. Okay, maybe it’s not technically new but, at the very least it’s new to us. Opened sometime in mid-2013, Marlin Moon Grille is a seafood restaurant offering moderately priced American Fare with unique sauces and their own fun spin on each dish. Walking in, we were hoping for decent seafood. What we got was even better than we were hoping. We walked out truly impressed. 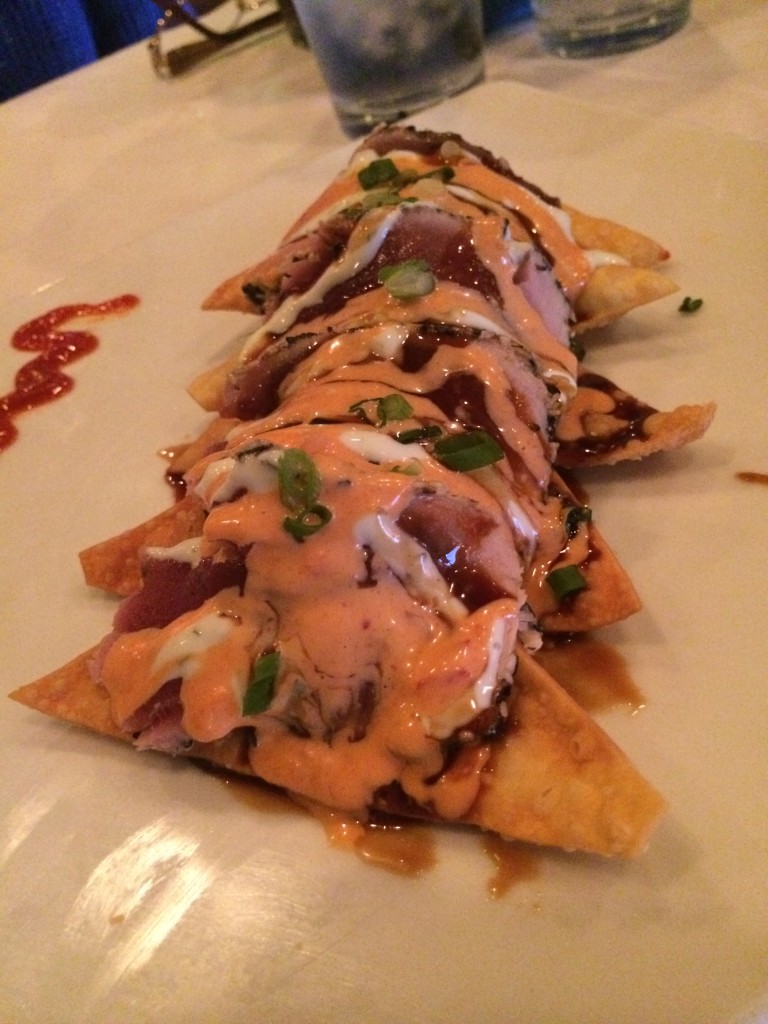 We kicked things off with the tuna nachos($10)-sesame crusted tuna on wonton chips with seaweed salad, a sweet teriyaki drizzle, spicy wasabi cucumber mayo. These were really good. If you’re a fan of seared tuna and a fan of spicy eats you’ll enjoy these. The wonton crisps were a bit out of the norm, a nice change of pace. It had just the right amount of seaweed salad to add another layer of flavor to the dish and also cool off the spice just a hair. Our only complaint was we’d have preferred the tuna sliced thinner. The fairly thick cut pieces made it a bit hard to eat and it’s a fairly messy dish to begin with. If you’re taking a client to dinner this is definitely one to try to stay away from because of the mess factor. Next we tried a cup of the soup of the day which was Spring Squash with Tarragon shrimp ($6/cup). The soup was creamy with nice subtle flavors which provided plenty to tickle but not overwhelm your taste buds. We were big fans. This is one of the better soups we’ve had anywhere as of late. The other appetizer we tried were Kirby’s crab balls($13). These were simple yet delightful. Balls of crab meat shredded, and breaded into balls then fried. They looked like fritters but were basically all crab. In our opinion it’s was quite a bit of crab for $13. It was served with an island aioli we enjoyed. We had a half pound of the jumbo pan steamed shrimp as an entrée($12)-pan steamed and spiced shrimp with old bay, sweet onions and served with mango cocktail sauce. I’ve never seen shrimp listed as pan steamed before. They actually seemed almost a cross between a steamed and a sautéed shrimp. The shrimp were flavored with old bay and had just a hint of spice. The cocktail sauce seemed better than usual although none of us could taste the mango. If you enjoy steamed shrimp and old bay you’ll really enjoy these. Normally when I go to a seafood restaurant I order seafood. What food writer goes to a seafood place and orders beef or pork? Apparently this week I’m the fool who did the unthinkable. In this case the Grilled Pork Chops($18) jumped out at me because of their apricot horseradish glaze. This seemed unique enough that it merited breaking the cardinal rule. I’m glad I did. I can’t recall enjoying a pork chop this much in years. I ordered the pork chop medium well and it was cooked perfectly to temperature. The apricot horseradish glaze was fantastic! The chops tasted of pork then apricot and then just a hint of horseradish. I’d come back to Marlin Moon Grille again just for this dish. It’s a winner. 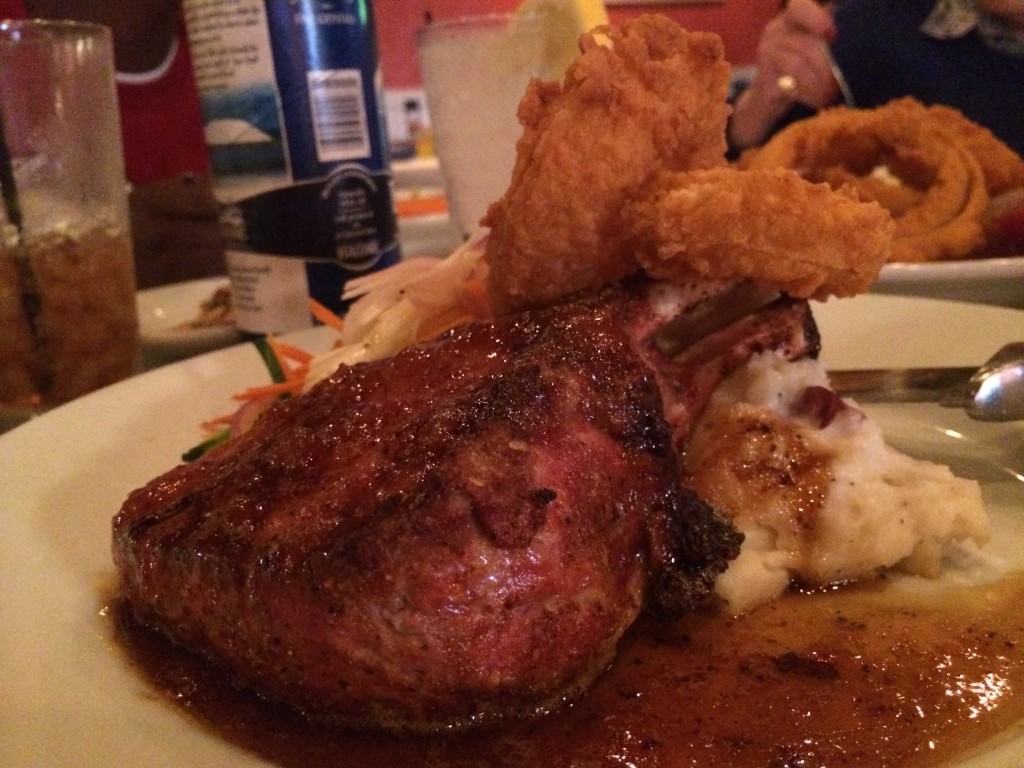 Service at Marlin Moon Grille was good. You could tell the waitress really cared about our experience and wanted to do a good job. She was attentive and checked back regularly to see if we needed anything. The only small negative was she was obviously new and lacked knowledge of the menu. We asked a couple of fairly basic menu questions that had her heading back to the kitchen to get answers for us. No big deal though. We all were new to our jobs at some point. The service was very good for the price point.

Overall we left Marlin Moon Grille as big fans. Good seafood, interesting appetizers, and decent service will keep us coming back for more. If you live near the beach definitely put this one on your list of restaurants to try. You won’t be disappointed. 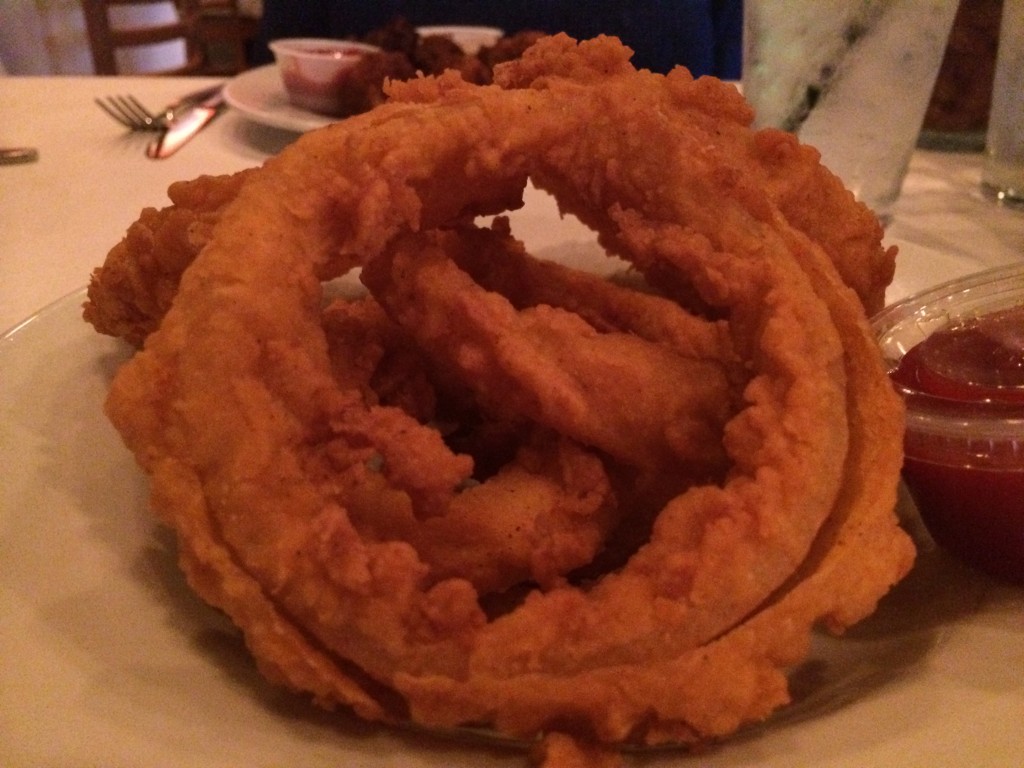