San Marco is a charming area brimming with quaint shops, great restaurants, and lively bars.  It is rich with history and yet feels fresh and new with its bustling, busy vibe.  San Marco Square especially is perfect for parking the car and strolling around for a bit.  There is plenty to see and do.  Stop by the fountain for a while, explore Balis Park, and then head into one of the nearby restaurants for a bite to eat.  We recently had dinner at Taverna on San Marco Boulevard.  I’ve seen photos of their beautiful food, so when I was recently faced with the decision of where to go with my hubby for our anniversary dinner, the choice was pretty simple – I wanted to try out Taverna San Marco. 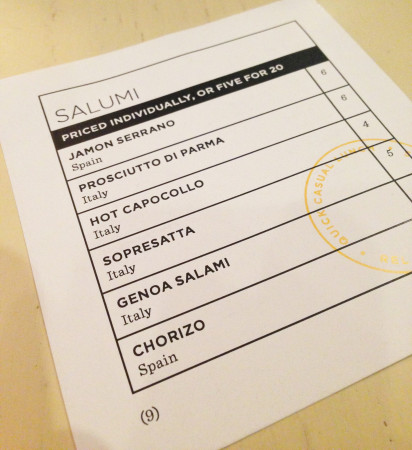 We were greeted warmly and seated right away.  We had made reservations and they were expecting us, which was nice.  Our server was friendly, charming, and attentive.  Initially, there seemed to be some confusion amongst the staff about who our server would be, but it was straightened out pretty quickly and our server didn’t miss a beat.  We happened to be there on the day before Labor Day, so we weren’t sure what to expect with it being a holiday weekend.  Taverna was not very busy when we arrived, but as dinner went on, the crowds grew and grew.   It was clear as the place started filling up that they were understaffed and our server then started getting a little overwhelmed with all the tables he was juggling.  I’m sure that they just did not plan on it being as busy as it ended up being.

We looked over the menu and started out with drinks and appetizers.  We were immediately impressed with their cheese and salumi options, especially with the prices.  Each meat and cheese is priced individually as listed on the menu, or you can order any five for $20.  For someone like me who loves cheese, that it a great deal and would make a tasty meal on its own.  We decided on two cheeses from the list – Manchego ($4) and Humboldt Fog ($5).  And since we can never have enough cheese in our lives, we also ordered the Burrata appetizer ($16), which came with grilled peasant bread and prosciutto. 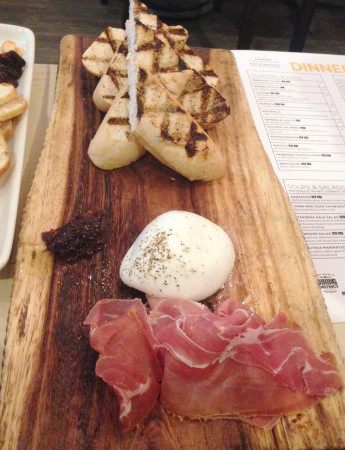 I was so excited I could barely sit still when all that gorgeous cheese arrived at our table.  I am a huge lover of all things cheesy, so I was in cheese heaven (Praise cheeses!).  The Manchego cheese had a rich, slightly nutty flavor.  And I am a sucker for a good goat cheese, and the Humboldt Fog was just that.  It had the perfect “twang” for lack of a better word.  The cheeses were accompanied by honey, crostini, and some lightly candied pecans.  The cheese plate also had a dollop of some amazing fig compote.  It had a wonderful dark figgy flavor, but was not too sweet.  It paired really well with the cheeses.  Thankfully, the burrata was also served with some of that compote.  One dollop was just not enough…it was delicious.  Speaking of cheese heaven, the burrata was also incredible, with its outer layer of mozzarella giving way to a creamy, silky, cheesy center.  That burrata, atop the grilled bread, plus a bit of salty prosciutto, and a smear of that fig compote was the perfect bite.  I could have finished up my meal right there and been completely satisfied.  It was a perfect start to our dinner. 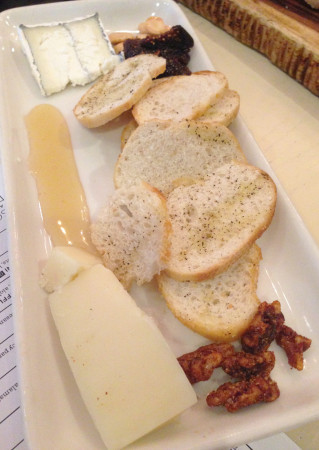 After eating our weight in cheese, we dove right into our entrees.  I chose the Salmon ($25) with bacon, corn succotash, and white acre peas.  The salmon had a nicely seasoned crispy skin on it that added great flavor and wonderful texture.  And the fish was perfectly cooked.  The sweet corn puree and succotash underneath the fish was a perfect accompaniment.  The succotash had a fresh-from-the-garden flavor that reminded me of homecooked comfort food.  It was really nice. 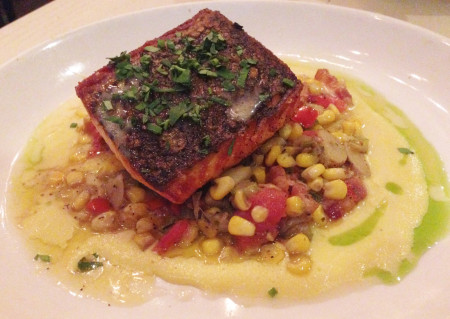 My husband had the House-made Fettuccini ($21) with Scallops ($8).  He was not quite as impressed with his entrée as I was with mine.  The pasta was good.  We always love fresh pasta, especially when it is executed really well.  These noodles were obviously fresh and homemade, which was nice.  And they were cooked well with a good texture.  The tomato cream sauce was good, but nothing special or exciting.  And we felt the same way about the scallops.  They were not bad, but they were definitely not the best scallops we’ve had either.  They lacked seasoning and didn’t have that nice sear that makes scallops so flavorful.  We found ourselves comparing them to scallops we have had elsewhere and wishing for those instead.  The scallops at Taverna just didn’t quite measure up to some of the others we have had in town.  Overall, this entree was just ok.  We would probably choose something else next time. 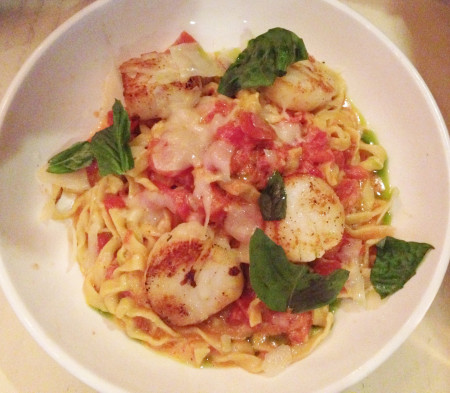 We finished off our entrees and perused the dessert menu.  After some very careful consideration (and a bit of “YOU can’t get that…I was gonna get that.”), we decided on Chocolate Chip Bread Pudding ($10) and the Gelato Trio ($9).  We are big bread pudding fans, and this one was pretty good.  The melty chocolate chips sprinkled throughout made it nice and sweet, while the cherries added a little tartness.  And the texture was great…not mushy, but not too dry or dense.  We also enjoyed the vanilla gelato sitting on top.  But really, we need to take a moment to discuss the bruleed bananas served alongside this bread pudding.  Why am I not bruleeing every single banana I eat?  How can something so simple be so delicious?  There was just something about that crispy layer of caramelized sugar along with the creaminess of the banana that was so, so good.  In other words, the bananas were a nice touch.  On the other hand, the trio of gelatos was just alright.  The gelato flavors vary based on what they have available.  My trio consisted of vanilla, fig, and chocolate.  The vanilla gelato was pretty good, although nothing amazing or special.  The fig gelato lacked flavor and, although I could see that it did in fact have fig in it, it tasted an awful lot like the plain vanilla gelato.  The fig flavor was just too subtle for me and was a little bland for my taste.  I was however, a fan of the chocolate gelato.  It had a deep, rich dark chocolate flavor that was just delightful.  I found myself wishing I had just ordered a big scoop of that instead. 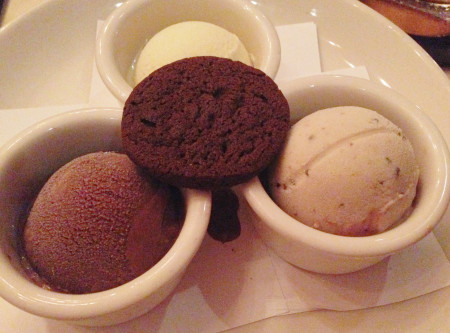 And while I sat wishing I had some more of that tasty chocolate gelato, I also started wishing for some artwork on the walls.  The décor at Taverna is sleek, modern, and simple.  It is warmed up a bit with the addition of wooden planks and beams used as accents.  And the flicker of candlelight throughout helps to add a nice warm glow.  But with white walls and no art on display, there really isn’t much to look at.  And that is totally fine as long as your beautifully-plated food comes out quickly and the servers are on top of things.  But if you are stuck waiting for an extended period of time for your server to come back by, it is easy to start noticing how bare and minimal the décor is.  This sparse feeling was only magnified by the fact that our table was on the elevated dining area along the left side of the space.  This area is basically a long corridor of tables with a huge wood-planked wall blocking any sort of a view of the rest of the space.  So, all we could see from where we were sitting were towering blank white walls, a huge wooden board, a long line of tables, and the frustrated faces of other diners whose food had also not yet arrived.  Don’t get me wrong – at first, I loved the décor.  I am a big fan of minimalist décor and keeping things simple so that the focus is on the food.  I think that is especially important at fine dining restaurants, where you want the beauty to be on the plate.  I get that and I am all for that.  But if that is what a restaurant is going for, then service needs to be top-notch and staff needs to be on the ball so that patrons don’t end up bored, frustrated, and twiddling their thumbs.  When you are waiting and waiting for food or for your server to come by so you can ask for your check, and all you see when you look at your dining partner is frustration that we are waiting so long…some art on the walls would be a great distraction. 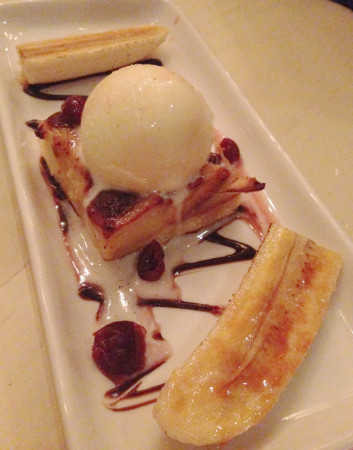 So overall, Taverna was good, but not mind-blowing.  Maybe we caught them on an off night when they were busier than they had expected to be.  And perhaps I went in with my expectations a little too high.  But it was hard not to expect a lot when I had heard such great things about the place.  Now, I am not saying that the food was not good or that our experience was all bad – there were definitely some big positives (the cheese, for example).  But there were a few misses too, and it just didn’t quite live up to all the great things we had heard.  It was good, but just not as impressive as we had hoped.  Would we go back?  Absolutely.  I’m sure that we will be paying Taverna another visit, but probably when we are in the mood for a much more casual meal. 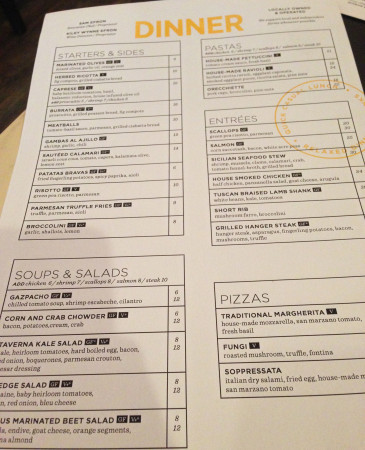