We met some old friends who were in town briefly at Derby on Park on a rainy Saturday for lunch. Derby on Park has a rich history, but we’ll let the owners tell it:
“Michael & Zack Nettles-Williams, and Cheryl & Neil Corrado; Four friends who combined their resources and talents to save a 5 Points landmark. The Derby (The Green Derby, the Derby House, and the Derby On Park) in some incarnation has been an institution in the Riverside neighborhood since the 1940’s. The original owner, Mr Van Fletcher, started with the Green Derby and later expanded to include his Derby House diners. Over the next several decades the 5 Points location changed hands several times ending most recently with the current four owners.” 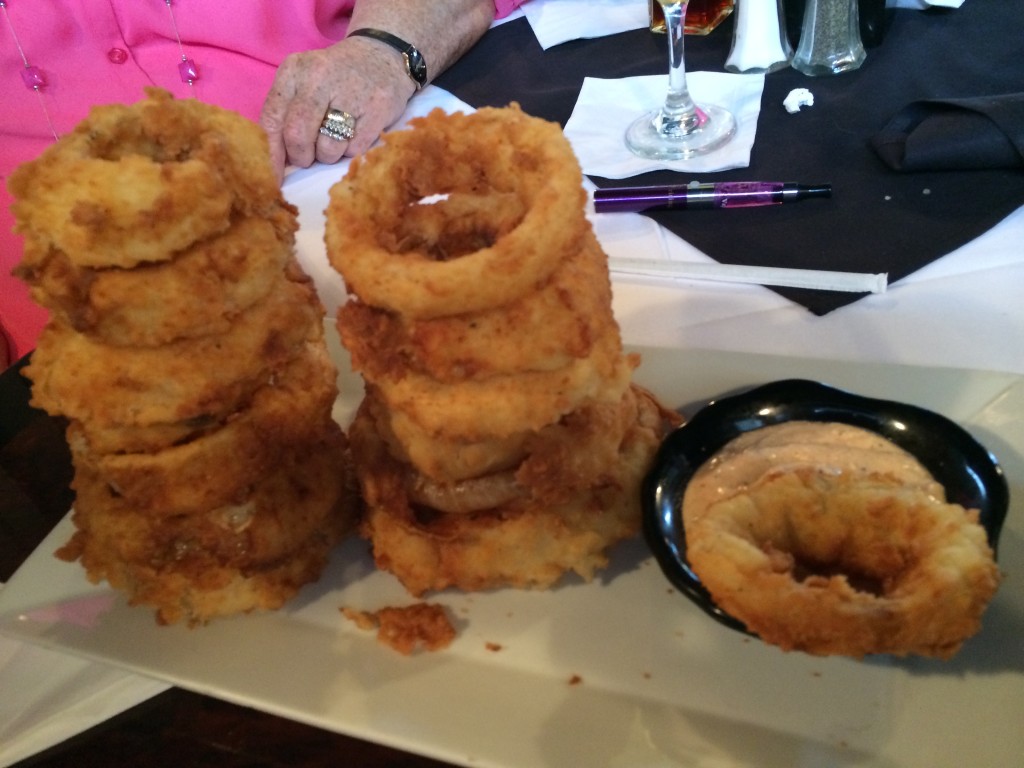 Before we start in we’d just like to commend Michael, Zack, Cheryl, and Neil for returning the Derby to all of its historical glory. We know from many Jacksonville natives seeing that landmark go would be like losing an old friend. We tip our derby hat to you!
The day we went to Derby on Park was a rainy, dreary day. Due to the fact that the derby is in 5 Points, parking can be a pain. We were lucky and found a spot right on Park street. The Derby has a lot of outdoor seating on their brick patio, but it has a roof and partial walls. We sat on the patio and were very comfortable despite the bad weather.
We started our meal with onion rings ($7.95, Thick sliced and buttermilk breaded in house; served with a horseradish sauce). The onion rings were gigantic and there were plenty of them. They could have used a bit more salt, but there is something to be said for freshly sliced, battered, and fried onion rings as opposed to the factory made frozen variety. The horseradish sauce that came with these is exactly that. It’s not zingy and zippy with a little horseradish. The flavor is straight horseradish. If that’s your thing, dig in! If not, just salt the onion rings and eat them plain. They’re still good.
The other appetizer we tried was the black bean hummus with fried corn chips ($6.95, also offered as a duo with bacon and blue cheese guacamole for $8.95). Truly we only ordered this for the bean eating toddler. I would have liked to try the bacon and blue cheese guacamole because YUM!…but we didn’t. I know all of us now regret that decision. Please accept my gravest apologies. Back to the hummus. It was very good. It had more of a Mexican flavor to it as opposed to a traditional hummus. It was a great appetizer and just the right size to share with a friend or two. The guacamole is probably even better, but now we’ll never know.
For our entrees there are four we will be reviewing: the derby steak burger, the hand dipped corn dog, the beau rivage flatbread, and the willow branch flatbread. 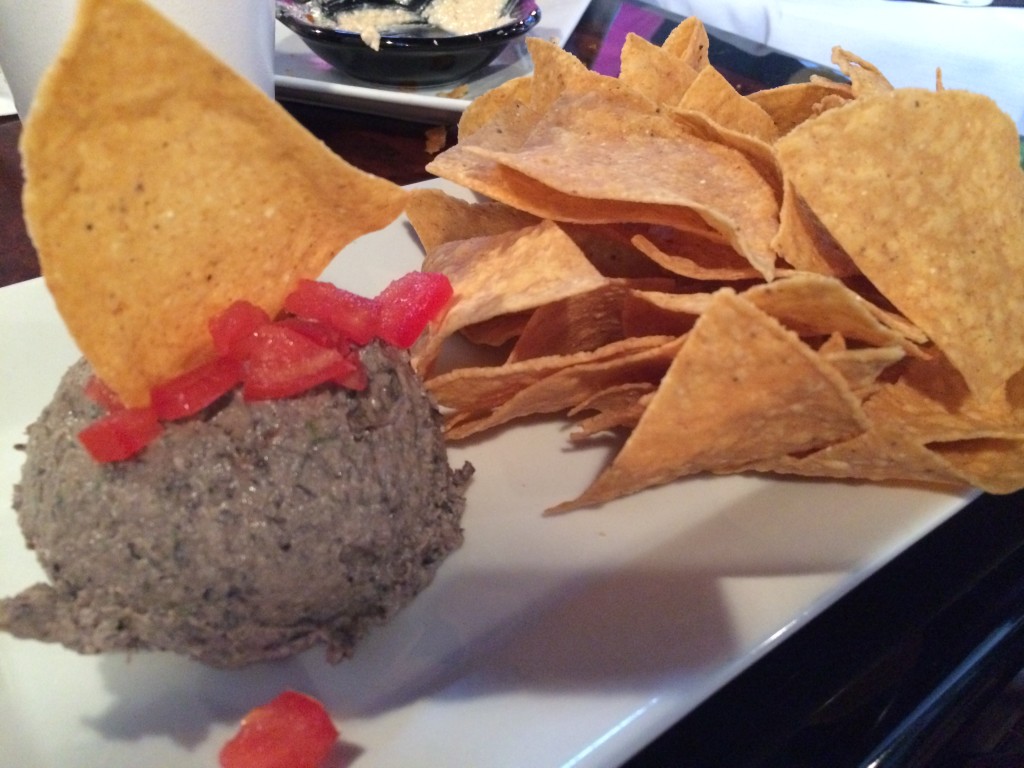 The Derby Steak Burger ($9.25, Topped with American cheese; served with lettuce, tomato, onion, and pickle on a fresh toasted bun). This is a pretty straightforward burger, except more delicious. It’s actually square on a square bun, which I found unusual but fun. There’s a reason the burger is such a popular food in our American culture. When it’s done right it’s a juicy party for your tastebuds. Bring your party hat if you plan on eating the derby steak burger. Our burger was cooked perfectly, the bun was toasted but not hard or dry, and all of the flavors worked together the way God intended. Enjoy! 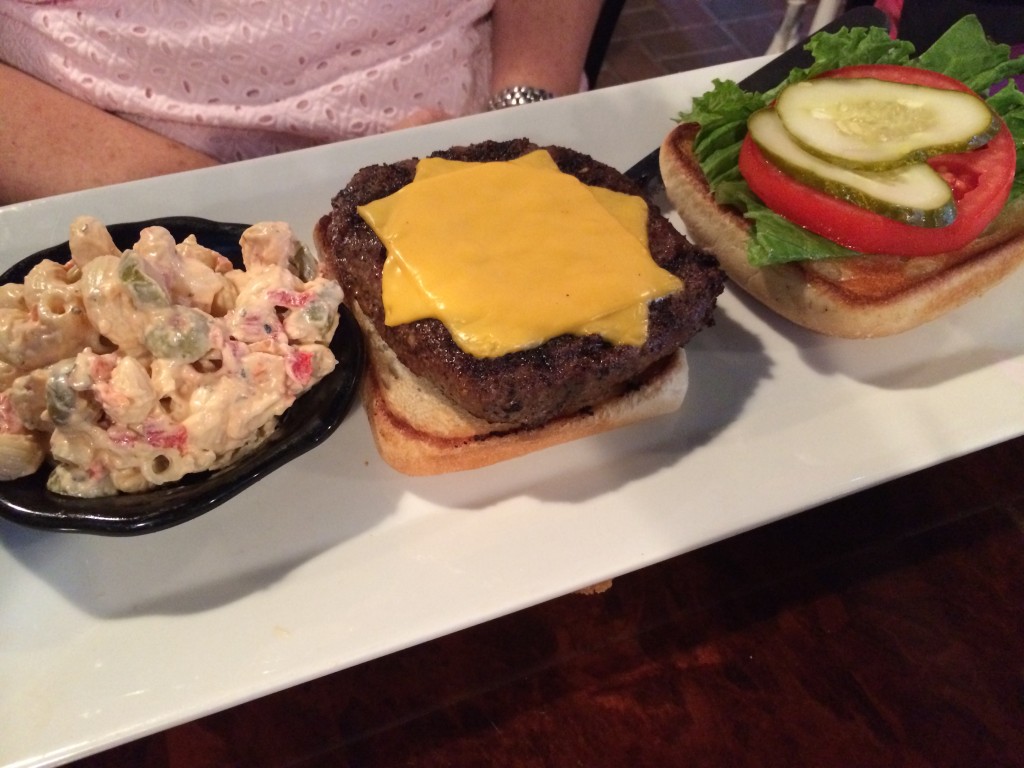 Next was the Hand Dipped Corn Dog ($7.95, A twelve inch hot dog, grilled then hand dipped in a cornmeal batter and fried “fair style,” served on a bed of house cut fries). This was a super fun menu item. Now that we have experienced it, I dare you to eat twelve inches of a corn dog. It is so rich we only got about halfway through. It tasted great, though. The hot dog was big and beefy to begin with, so adding a hearty cornmeal batter and frying it is like asking for a heart attack. It also comes with fries, so you might want to go for a run before partaking in it. The fries were great, too. They were freshly cut and fried in house just like every other fried menu item. 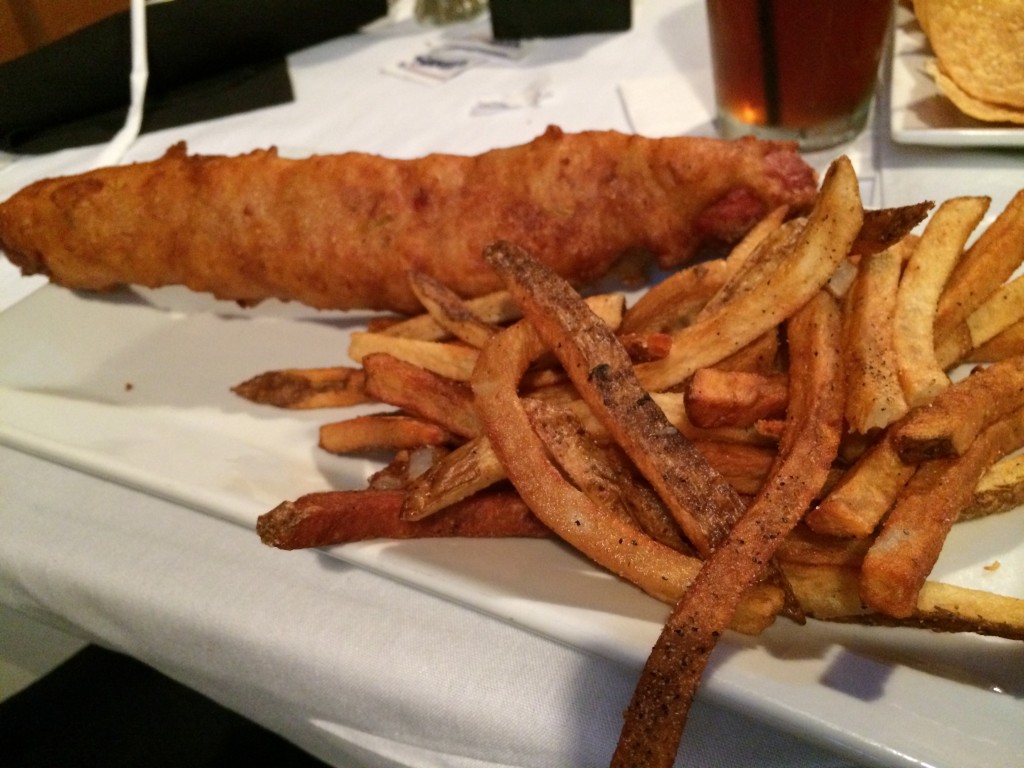 Lastly were the two flatbreads Beau Rivage- $9.95, Mayport shrimp, Feta cheese, herb pesto, veggies, and mozzarella. Willow Branch- $8.50, Tomatoes, fresh basil, mozzarella, and topped with balsamic greens. The flatbread itself, the base for the sauces and toppings, was a little breadier than I expected. Flatbreads usually have a flat, tortilla-like base with crispy edges. This was closer to pizza dough, and I’m not talking thin crust. It was good, just not what I expected. The Beau Rivage had a Mediterranean flair to it with the feta, pesto, veggies, and shrimp. There were 5 Mayport shrimp on my flatbread and everything tasted fresh. The Willow Branch was like margherita pizza with salad on top. It was also quite good. If it sounds strange to have salad on top of a pizza, then think about giving it a try. It’s tasty.
The service at the Derby was good. We were in a party of seven, which is a little large. We were seated within a few minutes. There was a bit of a lag in getting our drinks ordered and I started to get concerned the rest of the meal would go the same way, but it didn’t. A manager came over and helped get things started, and then came back to check on us partway through our meal. 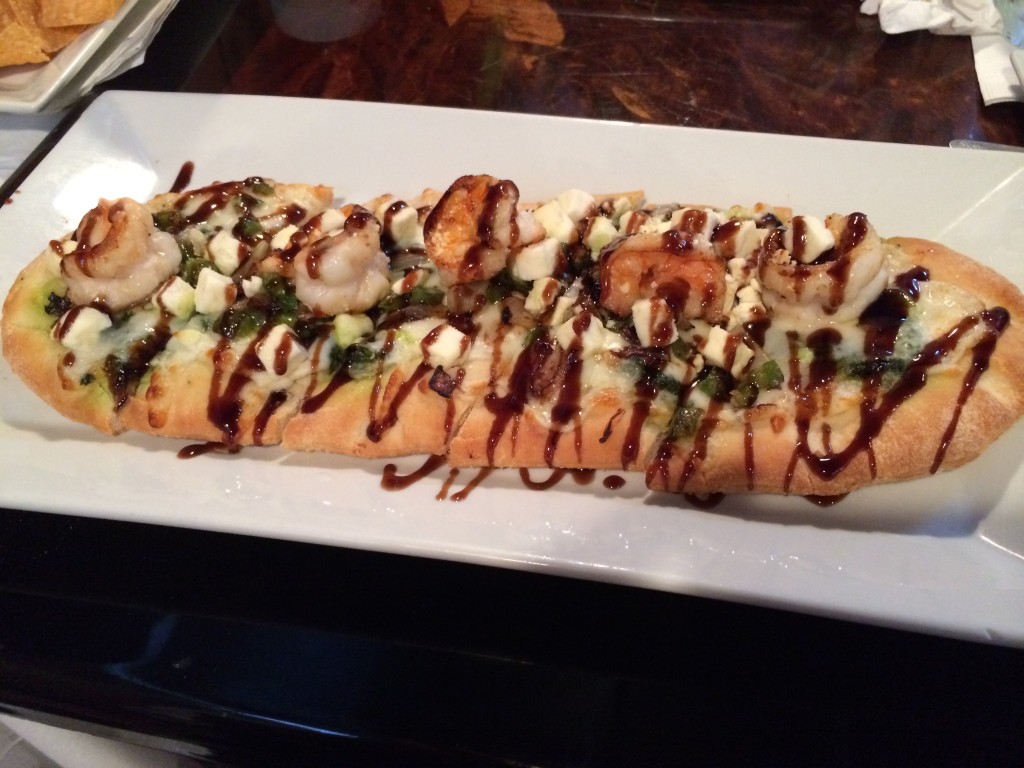 The one thing we noticed with all of the menu items we tried was that everything is prepared pretty rich. Derby on Park is not an easy place to eat healthy. However, everything tasted great. The food was prepared with care and pride, which was evident in the taste and presentation. Derby on Park is a great place to take an out of town guest or your mom for brunch. It has a classy yet relaxed atmosphere, which could also be said of the menu. We hadn’t been to Derby on Park since it opened as its current incarnation, and we’re so glad we stopped in. We’ll definitely be back. 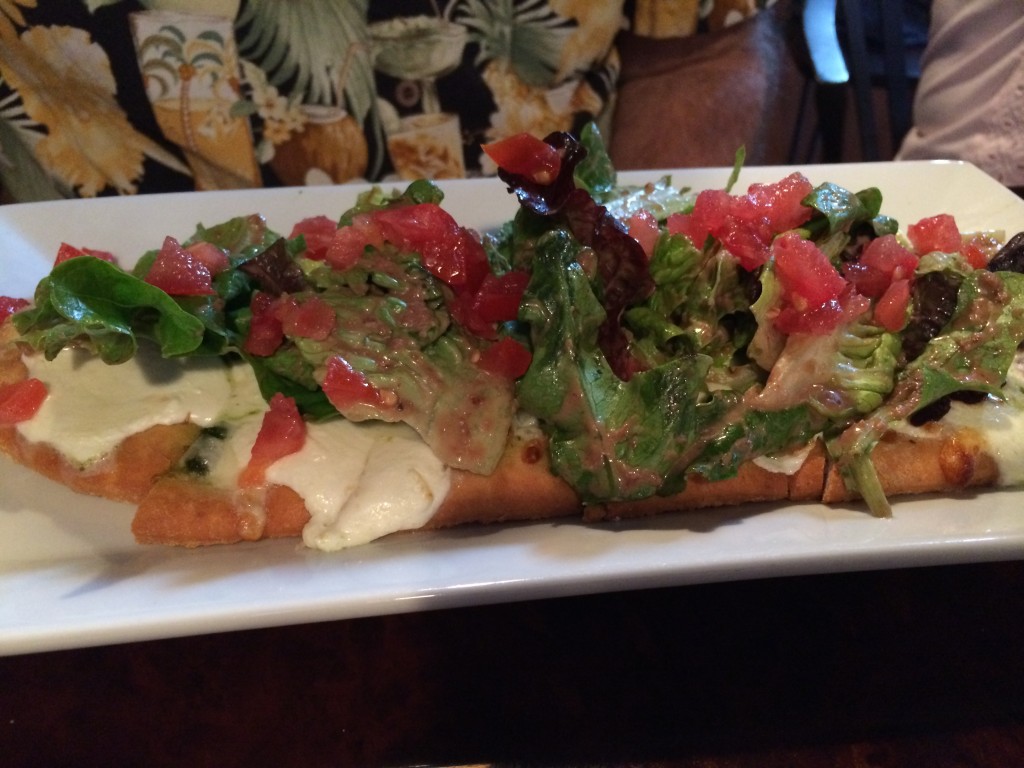 Cons
Parking can be a pain
Not for the calorie counters