I’m writing this article angry. I’m angry because the area of town where I live doesn’t have more wonderful restaurants like Thai and Lao Bistro. The Regency Square area is littered with chains; KFC, Cracker Barrel, O’Charley’s, Red Lobster, Steak and Shake, etc. There’s nary a great locally owned restaurant to be seen. While I love going downtown and to the beaches, sometimes I’d rather not fight traffic and parking to find a great local joint.

That seems to be changing in the small, non-descript shopping center on Regency Square Blvd across from Dillard’s. A few local places have starting popping up, Ephesus Mediterranean Grill, Rice and Noodle (which I haven’t been to yet), and now Thai & Lao Bistro are all a scant 10 – 15 minutes from my home. Praise Be. 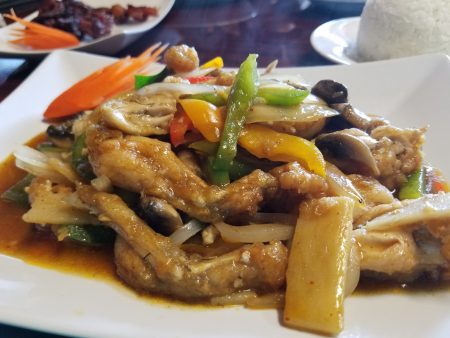 Thai and Lao Bistro is owned and operated by 3 sisters who grew up cooking traditional Thai dishes. They’re joined by their brother on the Laotian side of the family to put the “& Lao” in Thai & Lao Bistro. When I first heard of this restaurant, I thought it would be some sort of Thai and Laotian fusion, but in fact, they offer two distinct menus; about three quarters of the menu is Thai and the last quarter dedicated to classic Laotian dishes such as Sien Savanh and Laap Pa. Originally the brother was going to venture out and open his own Laotian restaurant. His 3 sisters convinced him to save the rent and join them instead. We Are Family, indeed.

We were greeted warmly by the youngest of the 3 sisters and seated quickly. She was gracious and took time to answer our many questions as we’re not as frequent eaters of Thai or Laotian dishes as we’d like to be. However, I’ve eaten in enough to know that this type of cuisine can be heavy on the spiciness. The menu has a handy numerical guide to indicate how spicy you want your dish to be. It’s a scale of 1 – 6, with 1 being a light jab to remind you where you are, and 6 being a full on overhand right to the face that makes you question every life decision up to that point. We stuck with a 1. 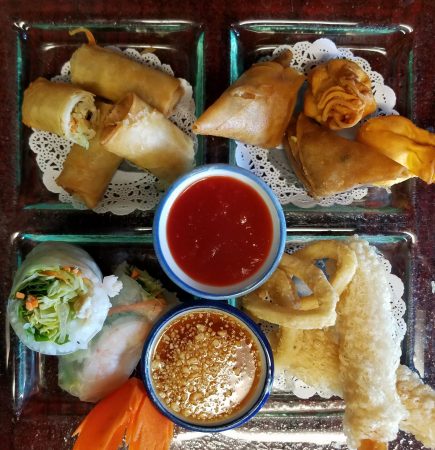 For appetizers, we ordered the Thai and Lao Bistro Sampler; a large tasting plate of most of the apps on the menu. It featured Spring rolls, both fried and fresh, Samosas, Shrimp Tempura, Calamari, and Crab Rangoon with sides of Thai chili and a peanut dipping sauce. There wasn’t a bad app on the plate. It was a wonderful combination of tastes and textures. The Shrimp Tempura, fried spring rolls, and calamari were perfectly fried and crunchy. The fresh spring rolls were a nice light diversion from the fried selections. The Crab Rangoon and Samosas (chicken, mushrooms, potato, onion, carrot, mint, and cilantro all deep fried in an egg roll triangle shaped wrapper) offered a deep, umami-ness that counterbalanced the light tasting options. If I had to pick a favorite out the bunch, I would say it was the Samosas. They had an, earthy, deep, and complex favor that hits the “comfort food” button on my palate.

For my main entrée, I ordered Pad Ped Ka Kob. Its frog legs, stir fried with Thai basil, sliced red, green, and yellow peppers, chopped galangal (a cousin to ginger), kaffir lime leaves, and chili sauce. I love frog legs in general. They’re weird looking, but so fun to eat. I’ve only had them deep fried, Southern style, so this was a new preparation for me. They were delicious. The bright flavors of the fresh herbs, the sweetness of the peppers all elevated the frog legs to something greater than they have any right to be. Frog legs, in general, don’t have much flavor on their own, but this dish with its use of fresh ingredients makes the frog legs a true star. 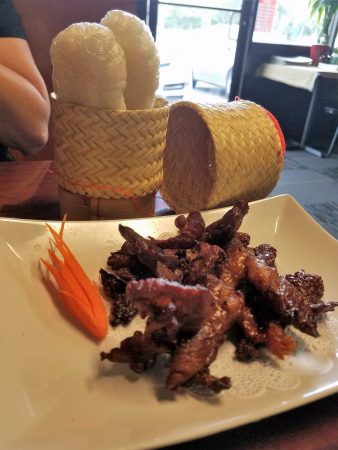 My dining partner decided to go with a soup for dinner. In this case, the Tom Kha Gai soup. It’s chicken, mushrooms, scallions, basil, onions, and cilantro in coconut milk broth seasoned with kaffier lime, lemon grass, and galangal. In my cursory familiarity with Thai food, I know any soups named “Tom” tend to be on the spicy side. This soup was a level 1 on the spicy scale, so it wasn’t bad, but it did clear the sinuses a bit. The coconut milk did wonders tempering down the heat. The Tom Kha Gai soup was smooth and filling. If it were a cold wintery day, I wouldn’t say no to an offering of this soup.

For a side dish, we ordered Sien Savanh from the Laotian side of the menu. Sien Savanh can best be described as a type of thick sliced beef jerky. They offer two types; sweet and unsweet. We ordered a mix of the two. The beef is marinated in garlic, salt, sugar (for the sweet variety), lemongrass, and oyster sauce. The overall flavor was fantastic: chewy, smoky, with a jerky-like texture, but still tender. However, I honestly couldn’t tell the difference between the sweet and unsweet. I have an overdeveloped sweet tooth, so I can usually pick up sweet notes before any other flavor. So either the sweetness was so subtle as to be undetectable, or I didn’t get a mix. In the end it didn’t matter, because it was all delicious. 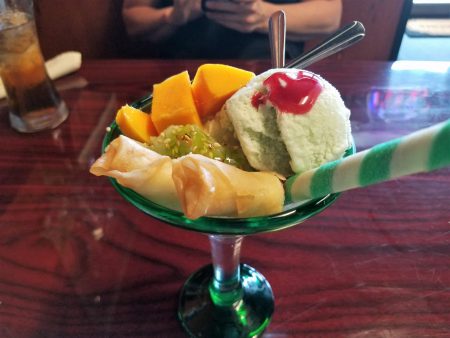 Finally for dessert, we ordered the house special, 3 sisters ice cream. There’s no description on the menu because it changes seasonally. Our version was a vanilla ice cream base, blended with coconut, banana, and banana leaves. The coconut and banana add a tropical flavor while the banana leaves add a hint of green color and enhances the banana flavor. It’s paired with warm sticky rice and topped with fresh mango and toasted sesame seeds. I loved the temperature contrast between the cold ice cream and the warm sticky rice. When it all melts together at the bottom of the martini class, it sort of becomes a cool rice pudding. The fresh mango topping was delicious and I love the nuttiness of the toasted sesame seeds. This was a great ending to the meal.

Thai & Lao Bistro is a gem of a restaurant in a part of Jax not known as a foodie destination. The welcoming and homey nature of the owners to the authentic food, homesick Southeast Asians living in Jax now have a place to get a taste of home. And no one can be angry at that.