28-year-old Chef Patrick “Paddy” Renehan of Paddy’s Brick Oven Pizzeria knew he’d be slinging pizza pies from an early age. From his first job at KFC at 16, he knew he wanted to be in the restaurant business for the rest of his life.  But that love of food began long before then.  Chef Patrick grew up in a food-minded and entrepreneurial family.  His grandfather was in the restaurant business for many years, working and managing restaurants in and around Jacksonville.  Patrick’s mother, Suzi Renehan, quit her corporate banking job of 25 years to follow her passion for baking.  She’s the founder and owner of Uncanny Biscotti’s.

At 17, Patrick made it his goal to own his own pizzeria.  From that point forward, he worked in as many pizzerias as he could, learning the business from every vantage point possible.  He also supplemented his real-world education with formal education.  Patrick graduated from Florida State College Jacksonville with a degree in Restaurant Management and Hospitality.  During his time at FSCJ, he expanded his education beyond pizza.  He completed an internship at Blue Bamboo under a chef who is widely thought to be one of Jacksonville’s finest, Chef Dennis Chan.  He credits that internship with helping him think outside the box when it came to creating his menu. 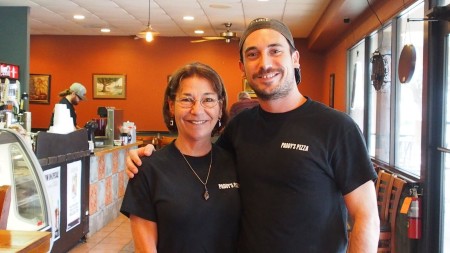 It was also during his time at Blue Bamboo that he realized that fine dining wasn’t for him.  Patrick says he identifies more with the blue-collar crowd.  He likes to cook food for the landscaping guy that can come in, grab a slice, and head to his next job.  He wants to create food anyone could eat.

And it’s that independent spirit and love of food and people that has carried him through.  So in 2011, his dream finally became a reality when he opened Paddy’s Brick Oven Pizza.  It started in a small storefront location a few miles from their current location on 9850-1 San Jose Blvd.  At the time, it was Uncanny Biscotti’s getting the attention while Patrick sold pizzas for carry out and delivery in the back.  Soon word got out about the pizza, and in 2013, with financing help from his father, Patrick and Suzi moved to a more traditional restaurant setting.  Paddy’s Pizza became the forefront of the family’s business.  But Suzi’s Uncanny Biscotti’s didn’t exactly fade into the background.  It’s still sold in the restaurant, it’s still as amazing as ever, and Suzi still gets to continue her dream of baking by making all of the desserts on Paddy’s menu. 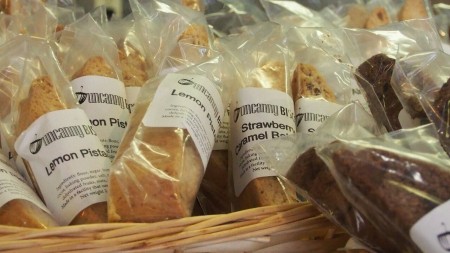 I asked him why a pizza place in an area saturated with pizza places.  I also asked him, “why not a franchise?”   Why risk the unknown when he could’ve just as easily bought into a franchise with a known name?  He answered those questions with the same answer: He said he loves making pizza, but not just any kind of pizza; true oven baked pizza.  He can’t express himself the way he wants to if he were confined to a franchise’s rules and menus.  In his words, “I’d last about a week in a corporate environment.”  People come to Paddy’s to get away from what Patrick calls “conveyer belt pizza.”

And it’s that same independent spirit that allows him to create original recipe pizzas such as the Peri-Peri Pizza.  He explained that Peri-Peri is an African word meaning “pepper-pepper.”  Peri-Peri sauce is usually made with African birds-eye chili.  The closest western version to that is a Thai chili sauce.  So he makes his own version for his Peri-Peri chicken pizza. 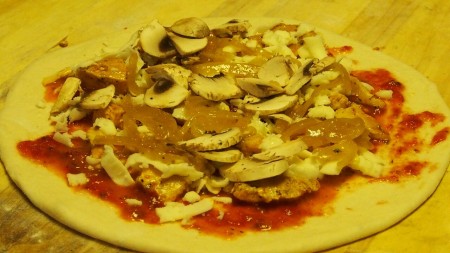 On a homemade pizza dough, he expertly spoons the house made marinara sauce, adds chicken cooked in his version of Peri-Peri sauce, mozzarella cheese, caramelized onions, provolone cheese, and fresh mushrooms, all topped off with some more of his Peri-Peri sauce.  The pizza is cooked to crispy perfection in his pizza ovens.  The result is a pizza that’s a little sweet, a little spicy, but all fantastic, made with heart and the love of the pizza-making process that has propelled Patrick to success.

So what does the future hold for Paddy’s?  It’s wide open.  Patrick loves being an independent, local business owner and has no plans to change that.  He does want to expand to future restaurant concepts.  He mentioned maybe one day opening up another restaurant concept with a concentration on local brews and showcasing local musicians.  But for now, he’s absolutely loves what he’s doing and sharing his love with all of his customers. 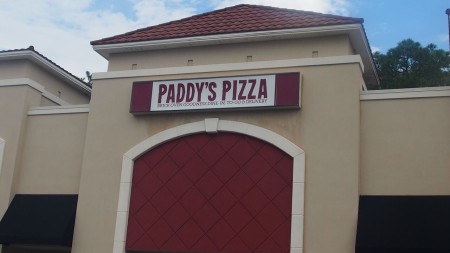