Local Chef Dennis Chan of Blue Bamboo is always up for a new adventure. So when he saw General Mills Neighborhood to Nation recipe competition the wheels started turning.

The competition was for professional chefs at family owned and neighborhood restaurants to submit recipes to win. Chef Dennis Chan’s Mandarin Orange Cake is a longstanding crowd favorite and local award winner at Blue Bamboo, so he started there. Chan came up with the Sunshine State Orange Crunch Cake and submitted the recipe. The crunch cake takes the Mandarin Orange Cake in a new direction, most notably with layers of crisp, flaky pastry dough to create an almost Napoleon-like dessert.

General Mills and Pillsbury received recipe submissions from chefs around the country, then whittled down the recipes and cooked and baked the remaining recipes. There are 5 winners for five regions of the United States. Chef Dennis Chan’s Sunshine State Orange Crunch Cake won for the Southeast region!

The check presentation along with free cake samples took place at Blue Bamboo on Friday, August 24, 2018 at 11am. There, the president of General Mills surprised Chef Dennis Chan and the entire crowd with the announcement that Chan had been chosen as the Grand Prize Winner! Chan received $30,000 for his restaurant and $5,000 for the charity of his choice. The Pillsbury Dough Boy even showed up for the festivities. Chan’s charity is Real Men Wear Pink Jacksonville, a charity for cancer awareness in conjunction with the American Cancer Society. Blue Bamboo is currently serving the winning cake on their dessert menu. 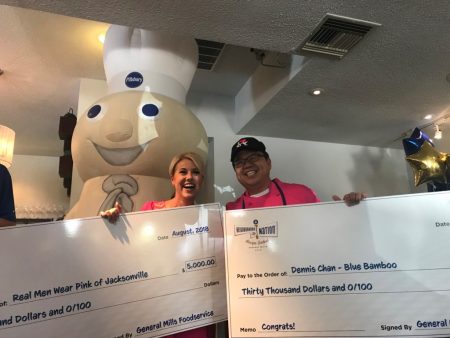 We got to try the cake recently and it is absolutely divine. The pineapple cream cheese frosting with the vanilla sponge cake with orange pieces and layers of crisp pastry dough are decadent. Don’t miss this cake, but bring a friend to share it with!

Congratulations, Chef Dennis Chan! We already knew how talented you are and how lucky Jacksonville is to have you. Now everyone knows, including the Pillsbury Dough Boy!

If you want to experience more of Chef Dennis Chan’s culinary creativity, check out our 90s themed Dinner Adventure coming up on Tuesday, August 28. This will be a fun, whimsical, and yummy event! Check out the menu here. 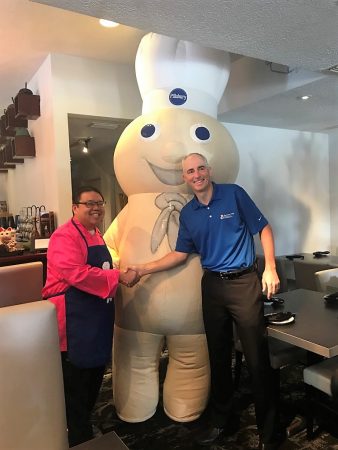