We headed down to the Jacksonville Landing on New Year’s Eve for the Gator Bowl pep rally and figured we’d pick out a place for a quick dinner. Cinco de Mayo is your standard Americanized Mexican restaurant. Tacos, Burritos, Enchiladas and the like are the typical fare. One of the nicest things about Cinco de Mayo is you can sit outside on nice days with a killer view of the river. 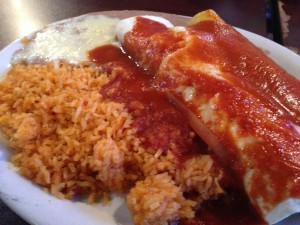 Food: When we sat down we were immediately delivered some chips and queso. they were pretty standard for any local Mexican place. First we tried some hard tacos with ground beef. The beef was pretty bland. They were okay but nothing to write home about. On a grading scale they probably get a C minus. Next up was a burrito. It was a pretty standard burrito and again the ground beef was bland. It did have a generous amount of ground beef in it. After that we tried a beef enchilada. Again bland ground beef. The enchilada sauce was pretty bland as well. Finally we tried the Shrimp Nachos. The shrimp were really well seasoned and cooked perfectly. The cheese dip was good, not spicy, and vegetables were firm, not mushy like you find at some Mexican restaurants. We ordered each meal with rice and beans. The rice and beans were the standard rice and beans you’d expect at a Jacksonville Mexican restaurant. All of that with a couple of drinks ran us right around $42. 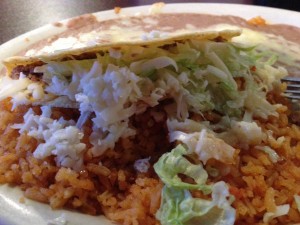 Hard Taco with Rice and Beans at Cinco De Mayo

Service: When we walked in there was no one near the door at all so we stood there wondering whether to seat ourselves or what to do. Eventually someone saw us and seated us. We chose to sit on the patio which had a beautiful view of the st johns river. I might come back just for the view even though the food was mediocre. The food was a little slow coming out but other than that the service was fine. 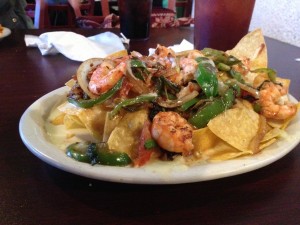