Opened just 12 months ago Amaretti desserts is a wonderful little dessert shop located near where Old St Augustine road meets Phillips highway. James and Donna Damiano, owners of Amaretti desserts invited us out to try some of the dessert creations Amaretti has to offer. Of course, we couldn’t resist. Donna was the assistant pastry chef at Epping Forest yacht club and then became head Pastry chef at San Jose Country Club. After much thought and planning, James and Donna decided a year ago it was time to take a leap of faith and fulfill Donna’s dream of opening her own family run dessert shop. They invested their savings and off they went. Amaretti Desserts is the realization of that dream. Amaretti is a local dessert shop where every single item is made from scratch from the cakes to the pies to the cookies and so on. 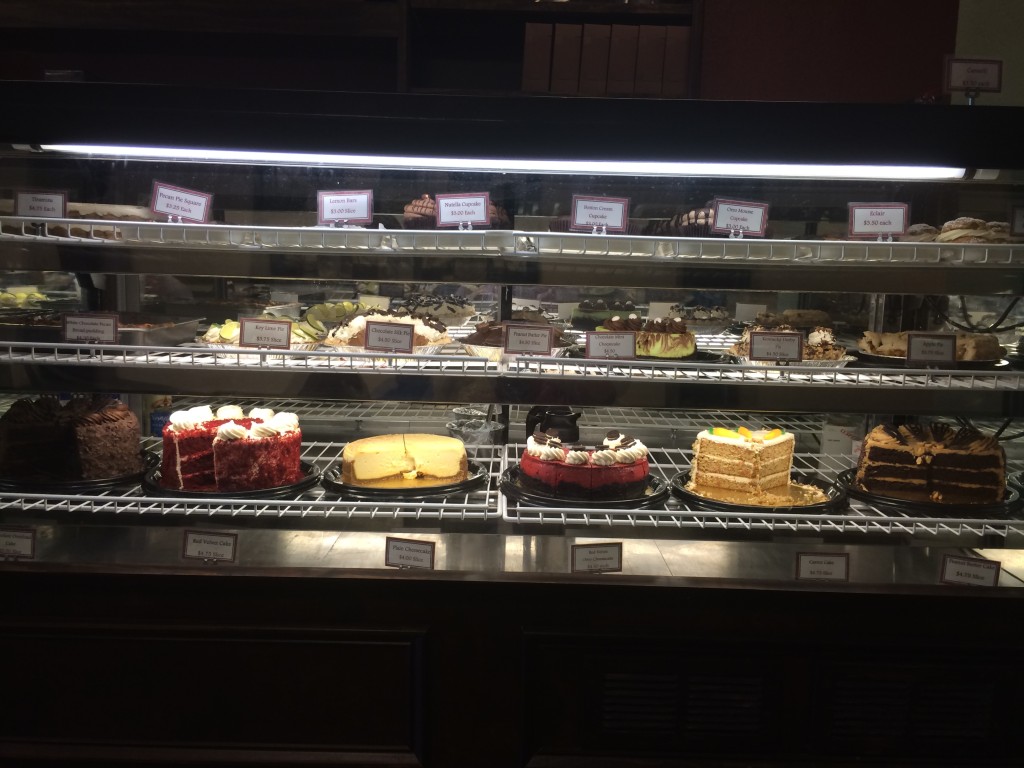 Since we were invited out we had the chance to try a wide array of items they have to offer. I can attest that there wasn’t a single item I tried that I wouldn’t order again. First up we’re the sticky buns. They make these in the morning and when they’re out there are no more to be had. These are usually gone well before evening so if you decide to head out to Amaretti to have a sticky bun come early. Their sticky bun is made with the same dough as their cinnamon rolls but rather than cinnamon and frosting their covered with an amazingly delicious caramel coating that will blow you away and pecans. This is caramel on another level! You’ve gotta try them. I’m pretty sure at some point I will drive across town one morning because I’m craving them. I’m not sure if I should thank the folks at Amaretti for that or curse them for introducing me to something so wonderful and addictive. 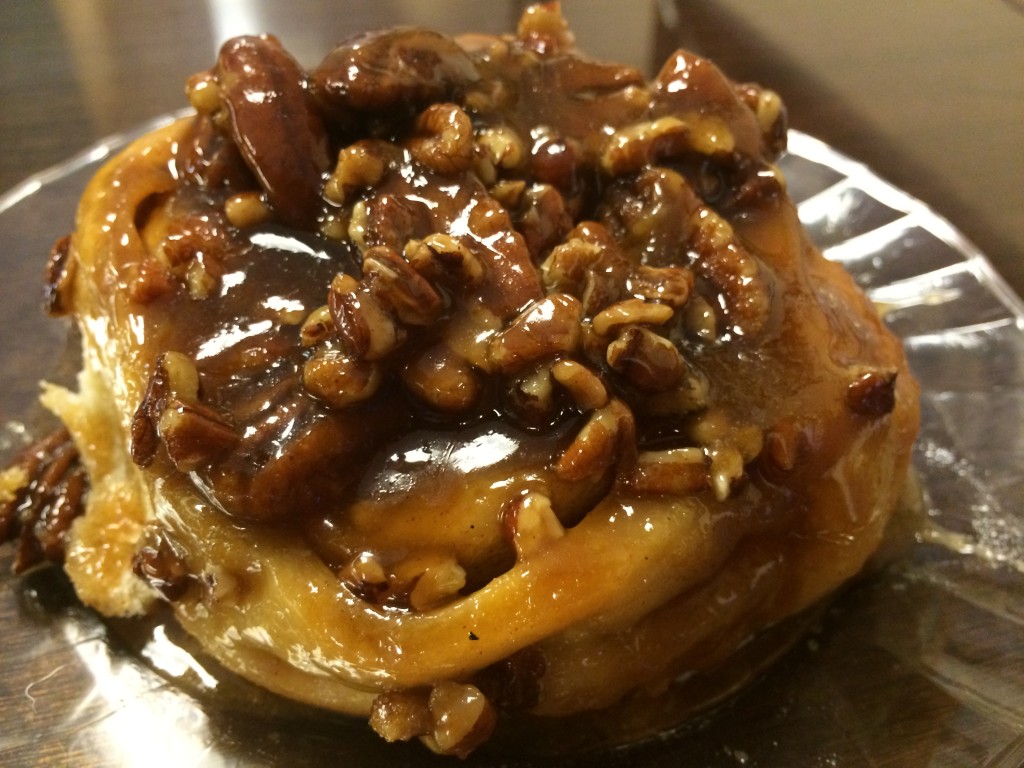 Next up for tasting was the tiramisu. I’m probably not the best reviewer of this item since I’m not a coffee drinker but I will say the depth of coffee flavor was impressive. I tried a couple bites while I was at Amaretti and brought the rest home to my wife who loves tiramisu and she was definitely a fan. 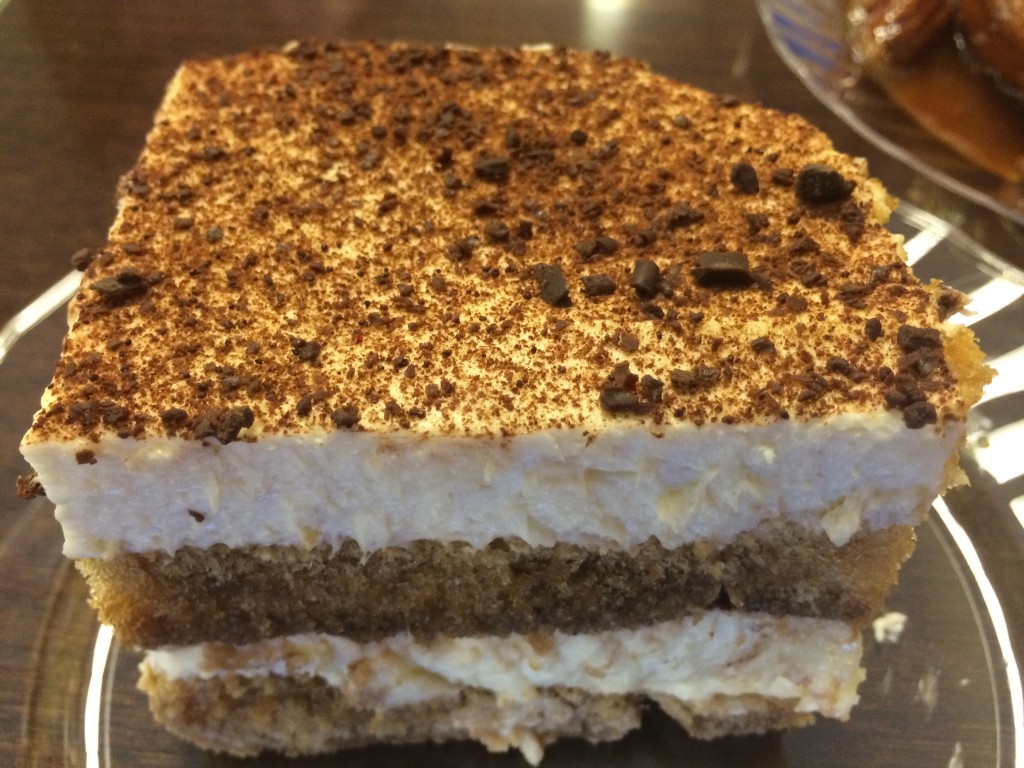 Next up was another traditional dessert, the cannoli’s. These were tasty. 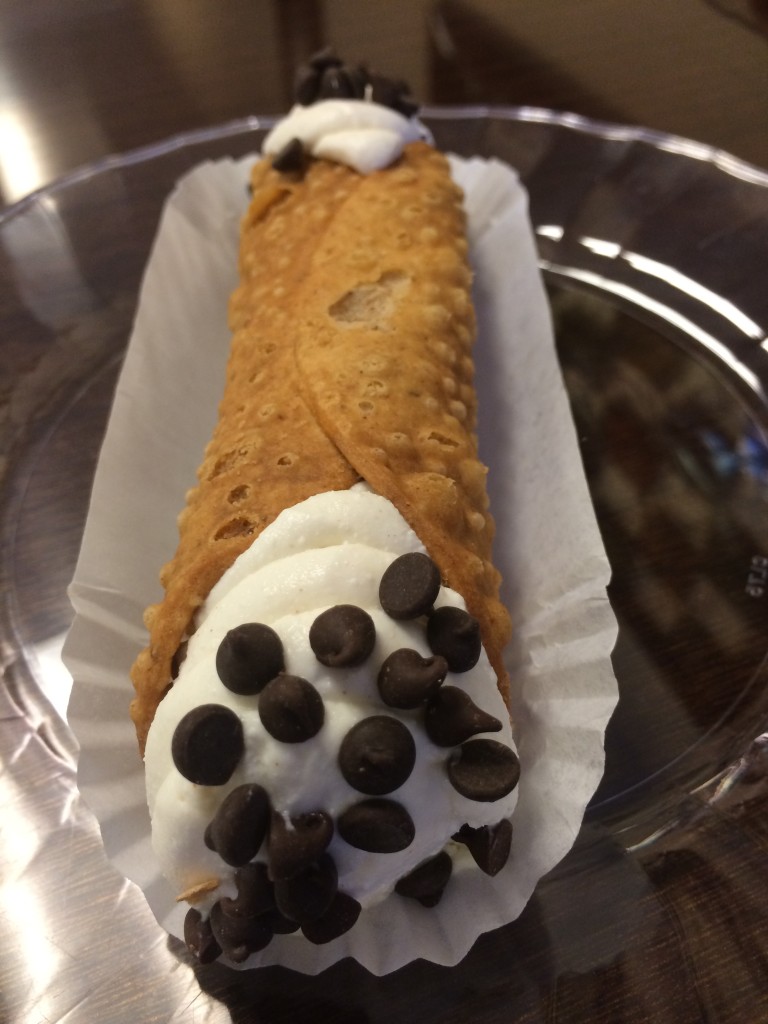 Next we dove into the Chocolate Chip S’mores Bars. Who doesn’t love s’mores? It’s un-American not to like s’mores! I might just be considered a s’mores super fan. I was ridiculously excited to try this item. I will say I was slightly disappointed with this one. I set the bar very very high for s’mores style items and given that everything else I tried prior to the S’mores bar was so amazing my expectation of the s’mores bar was stratospheric. With that said it was still very good. If you’re a s’mores fan I’m fairly sure you’ll like it. In hindsight I should have definitely asked for it to be heated up. I think the missing piece was melty chocolate. Next time I’ll ask them to heat it and I’m confident I’ll enjoy it even more. Believe me there will be a next time! 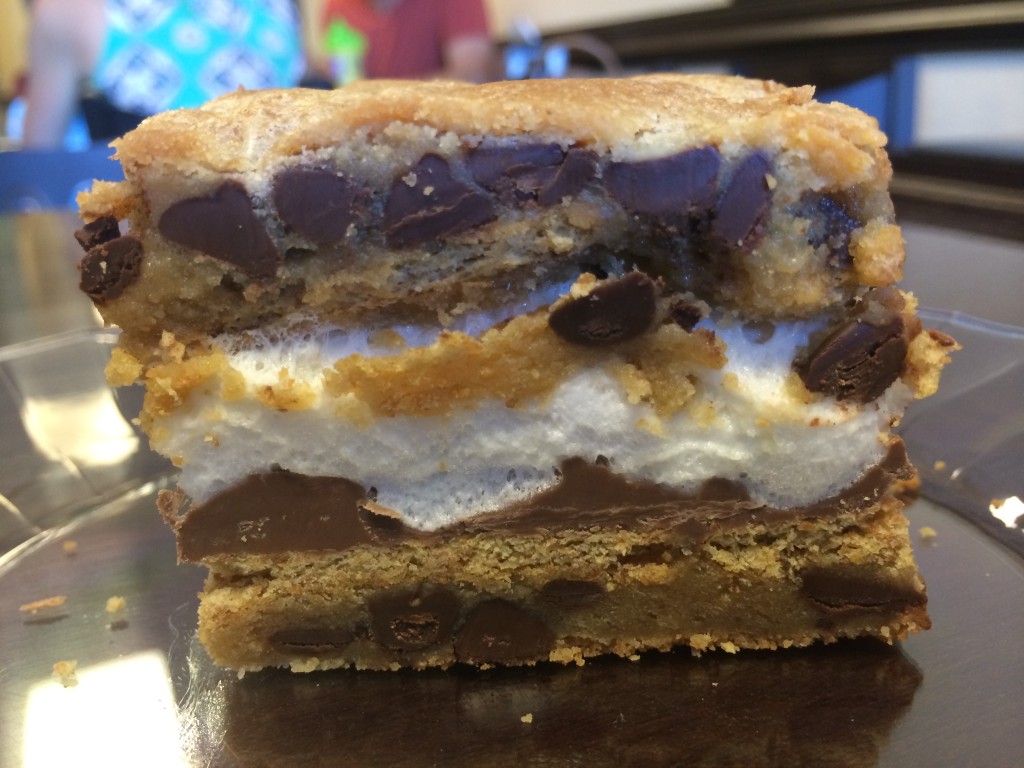 A visit to a dessert shop wouldn’t be complete without trying some cheesecake and I’m happy to report we got the chance to try some cheesecake you won’t want to miss. The cheesecake we tried was quite a doozy. How does Red Velvet Oreo Cheesecake sound? Sounds pretty awesome doesn’t it! Well, it tasted even better than it sounded. Too often cheesecakes that sound this rich are like swallowing a brick. They fill you up to uncomfortably full quickly and they’re a bit overwhelming. This cheese cake was lighter than you’d expect while still embodying all of the flavors we’d want to experience when we hear red velvet Oreo cheesecake. Try it! You’ll thank me; I promise. 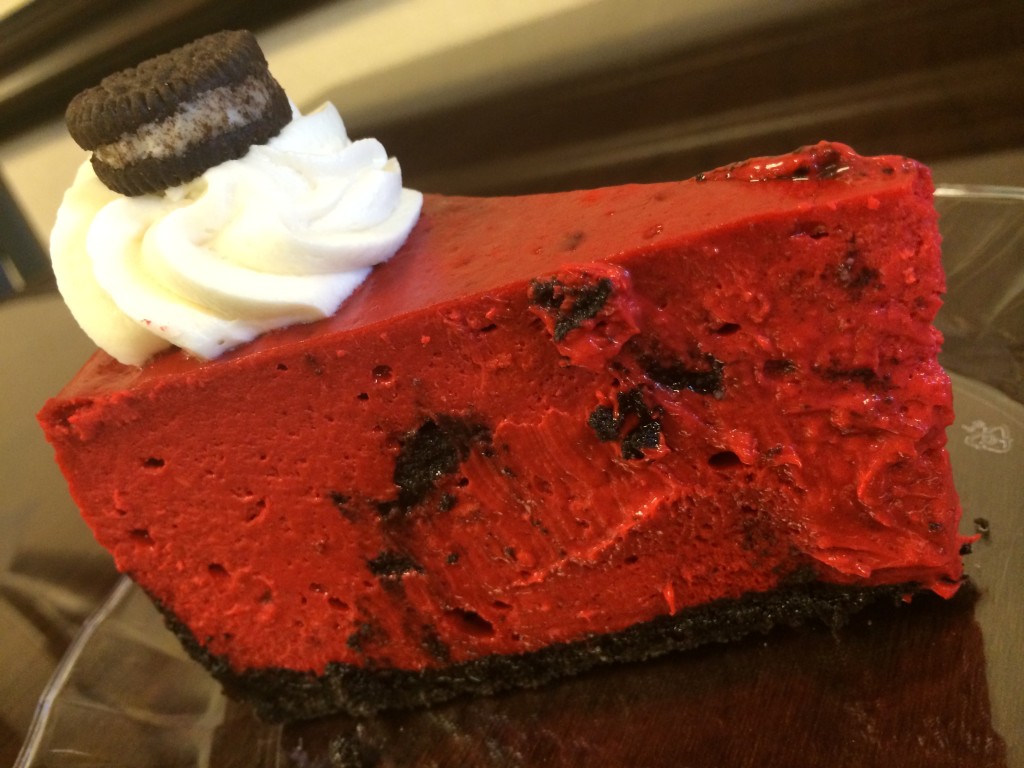 After cakes, cannoli’s, and sticky buns in the dessert shop the folks at Amaretti were nice enough to send me home with a big box of cookies. They were pretty scrumptious. My favorite of the bunch was the amaretti cookie from which amaretti desserts gets its name. An amaretti cookie is a bite sized or slightly bigger almond flavored cookie with a crunchy outside and a wonderful chewy center. These look a bit like a sugar cookie but provide you with a neat surprise chewy center. I loved the flavor of these in spite of not being a huge almond fan. I’ll definitely look for these any time craving cookies in a dessert shop in the future. 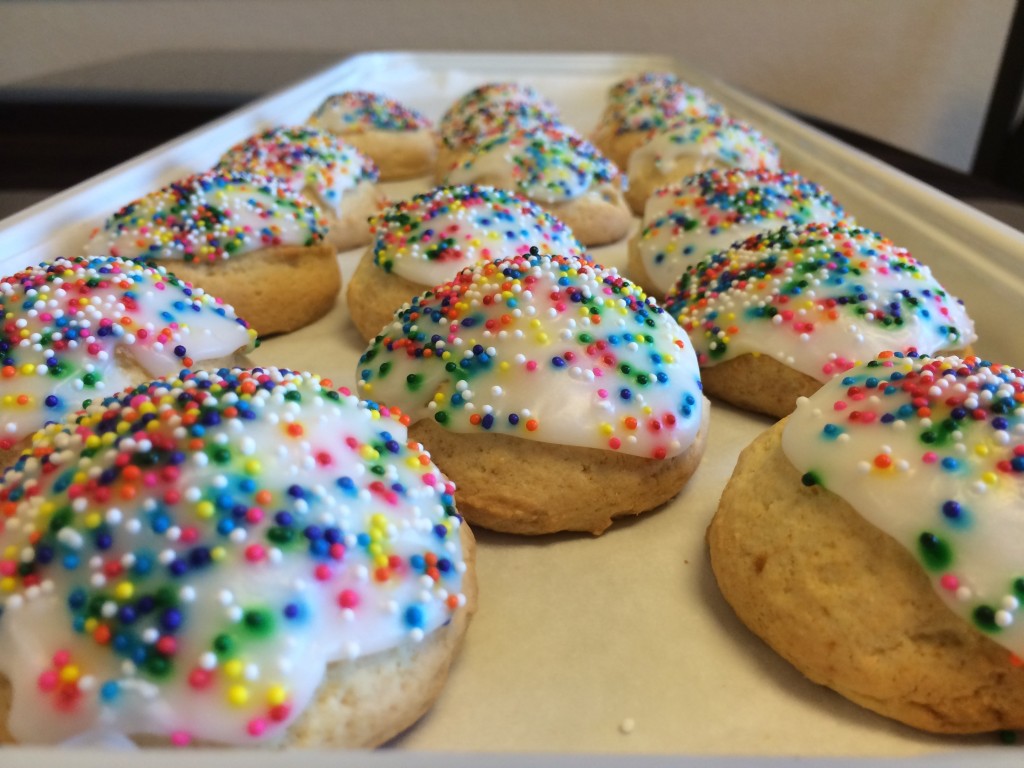 There are lots of dessert shops around Jacksonville. There are yogurt shops, cupcake shops, cake shops and plenty of other kinds too. I couldn’t help but leave Amaretti desserts feeling this one was special. During the time I was there I got the chance to chat with James and Donna and learn all about them their family and their passion for sweets. At one point in the conversation James said to me, “I think she puts something in this stuff that makes us crave it in the middle of the night.” Donna quickly replied, “It’s love that’s the special ingredient.” We believe her. From the interaction we observed the Damiano’s have with customers to the passion that oozed from Donna when she shared with us stories of how she arrived at different recipes like the red velvet Oreo cheesecake it’s clear that this truly is a labor of love. We loved our visit to Amaretti desserts and I’m confident you will too. Make sure to get there early so you get a chance to indulge in one of those awesome sticky buns!