Walking into Soto’s Restaurant the first thing that hits you are the bright colors, especially on a cold and dark January evening. The second thing you notice is the friendly staff. For those not familiar with Venezuelan food the menu can be very overwhelming, but don’t be intimated, the staff is more than willing to explain each item to help you find what you are looking for.

The first category you will see listed on the menu boards are arepas. Arepas are defined (by Soto’s) as traditional Venezuelan grilled corn patties, crunchy on the outside and moist on the inside, cut in half and then stuffed with savory, delicious, fresh ingredients. The steak arepa includes steak, lettuce, tomatoes, shredded cheese, and Soto’s house sauce which is cilantro garlic. The steak was well seasoned and cooked and the light green house sauce added a great flavor. The chef also brought out a pepper based spicy sauce for me to try which added a nice kick for anyone who prefers a little heat. 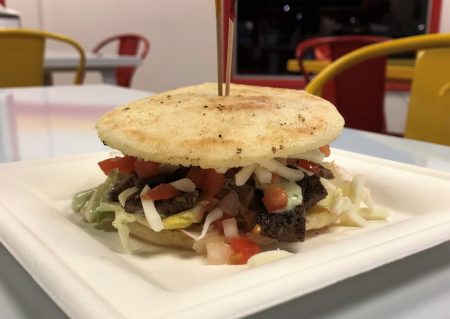 The shredded beef tostones were a real stand out. The tostones at Soto’s are essentially a sandwich with fried plantains in lieu of a bun or bread. These have a layer of melted cheese on the top and shredded beef, cheese, tomatoes, and lettuce inside. On its own, the shredded beef was on the salty side, but the slightly sweet tostones combined with the salty beef make for a delicious balance. 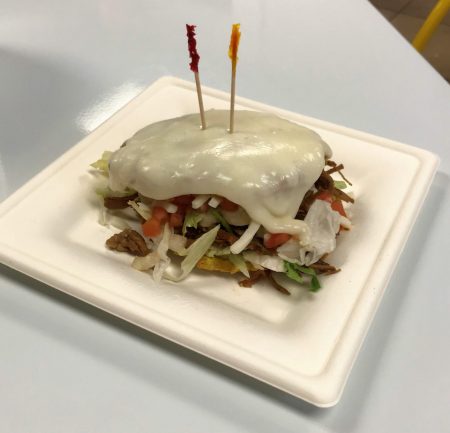 Tequeños are essentially a Venezuelan version of gooey mozzarella sticks. If you are a fan of cheese (and who isn’t?) these will be right up your alley. The cheese inside is queso blanco and it is perfectly melty, stretchy goodness. An order of these would make a great appetizer (or even a meal). 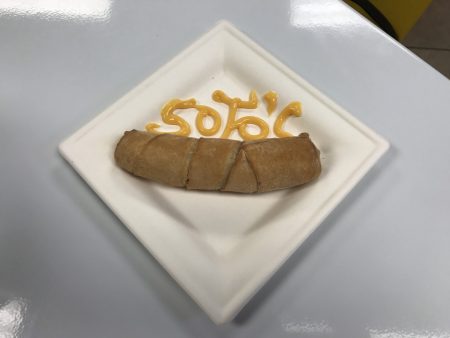 Soto’s offers typical fountain drinks and some canned soda options, but also serves chicha, a drink made with rice and milk. Topped with cinnamon, the chicha is thicker than most drinks but still light and not overly sweet. The slight sweetness pairs really nicely with the savory and salty entrée options.

We got to talking with owner Aristides Soto, who has a passion for making his own chorizo. The chorizo on Soto’s Kitchen’s menu is all made right there in the restaurant. As Aristides explored starting his own chorizo business and/or restaurant, his daughter came home from school one day saying she had a new friend from Venezuela. She wanted her family to meet her new friend’s family, and when they did Aristides was met with the face of a longtime friend from Venezuela, Lorelen. The two friends caught up and Lorelen joined Aristides as the chef at Soto’s Kitchen. It’s crazy to think that out of all of the places and people in the world, Aristides and Lorelen crossed paths here in Jacksonville while putting down roots. Certainly their unexpected re-connection helped paved the way for Soto’s Kitchen to be born.

Soto’s Kitchen is a great stop for a casual meal or even a snack. Don’t be afraid to ask questions about the extensive menu. Many of the other patrons were Spanish speakers, but don’t be daunted if this is all new to you, you’ll be welcomed with open arms. I certainly was.