Did you know we have a better Korean BBQ restaurant in Jax than most metropolitan cities?  It’s true.  Sam Won Garden is located in a less than impressive strip mall on University Boulevard, about a mile north of I-95.  It’s easy to overlook it, but don’t.  The quality, menu variety, and service at Sam Won Garden is top notch.

If you have never tried Korean food, you are in for a treat at Sam Won Garden.  Diners can enjoy a regular table with above average restaurant service, or choose a grill table where your meat is grilled in front of you by your server.  We always opt for a grill table. 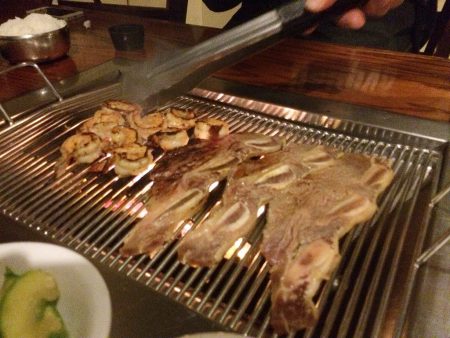 The menu consists of Korean words written in English because the names of the dishes are Korean.  There are explanations accompanying most menu items and the staff is incredibly helpful and knowledgeable.  You don’t learn new things unless you ask questions, so ask.  The menu is divided into appetizers, soups, noodles, a la carte, combos, entrees, and BBQ.  We mostly go to Sam Won Garden for BBQ, but have enjoyed a variety of dishes.

The items we frequently order are Haemool Pa Jeon (seafood pancake, the size of a dinner plate, $11.95), Kyoja (steamed dumplings, $5.95), and several BBQ meats, served with steamed rice and various kim chi vegetables.  Our favorite meats are Kalbi (also called Galbi in some Korean restaurants, grilled marinated shortribs, $17.95), Bulkoki (also called Bulgogi in some Korean restaurants, grilled marinated tender prime ribeye, $15.95), Dak Gui (grilled boneless chicken breast, $14.95), and shrimp.  The chicken is cooked in the kitchen for safety, but everything else is grilled on the table.  We often request bean paste (a salty spread that tastes much better than it sounds) and lettuce wraps which are great for creating lettuce cups or wraps as a mode of delivery to your mouth.  The kim chi, vegetables, and accompaniments vary depending on the day, what vegetables were available, and what the chef has prepared.  They are all cold and prepared without heat cooking.  Some are spicy, some are salty, some are vinegar-y.  Some we love and a few we have tried and never touched again.  Any vegetables you particularly enjoy you can request more of at no charge. 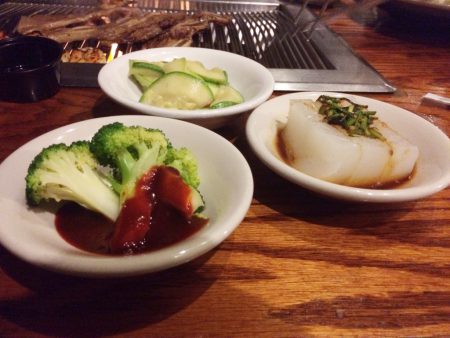 On a recent visit to Sam Won Garden we started talking sauces with our waiter.  Sam Won Garden serves an oil based dipping sauce that is good on everything.  Nearly all Korean restaurants make their own sauces, and rarely will you have the same kind of sauce at two different Korean restaurants.  We haven’t experienced the oil based dipping sauce anywhere else and asked what it was called.  It turns out, it doesn’t have a name because it is so simple.  At Sam Won Garden they mix sesame oil with salt and pepper and voila, dip your meat to tickle your taste buds.  It is the perfect accompaniment to the flavorful Korean BBQed meats. 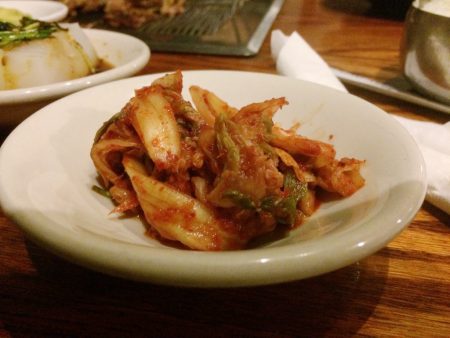 Sam Won Garden is a local gem.  The food is both authentic and accessible to folks who aren’t familiar with Korean food.  The service is consistently well above average.  Sam Won Garden is open every day from 11am-10pm, with some days open even later at night.  If you go, please leave a grill table for us! 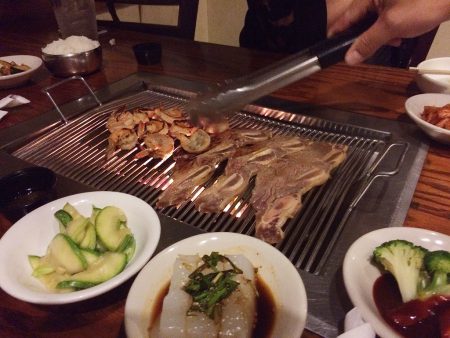