Jacksonville is a city tremendously welcoming of small businesses.  We’ve seen this firsthand at Jax Restaurant Reviews as our followers passionately eat at all of our amazing locally owned restaurants.  What we haven’t delved into completely is our burgeoning craft alcohol and beer scene, which is growing literally every day as our breweries expand and increase production, new breweries open, and Jacksonville makes its mark in national craft alcohol.  We want to begin profiling these businesses as we have our restaurants, because what goes better with locally sourced and prepared food than locally produced beer, wine, and alcohol?  Our first stop on this exploration of our city was sitting down with Paul Grey, owner and CEO of Carve Vodka, which is the first true Jacksonville produced vodka. 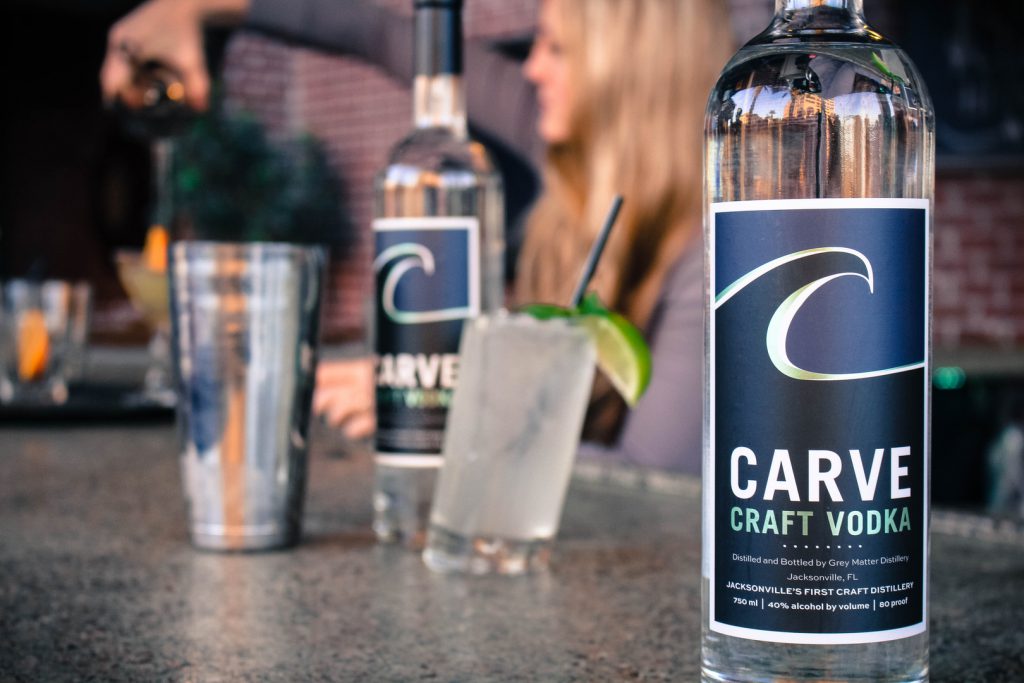 Carve Vodka was established in Jacksonville in 2014 and is still produced at Grey Matter Distillery in the Arlington area.  Paul recounted their history, “We opened up in a small little warehouse in Arlington where they would approve us to be open.  There are a LOT of rules and regulations on alcohol.  The first place we looked at they wouldn’t let us open.  We started producing as soon as we opened.  We’d like to be in places all over but the craft distillery industry is so strict.  You can sell bottles but you can only sell so many bottles per year.  You can’t have whole bars like Bold City Brewery has.  It makes it hard to do the whole tour experience and to have people in.  For example, St Augustine Distillery does an amazing job with their beautiful facility.  They had a lot of money starting out and they have a tourist industry in St Augustine to build from.”

So what are the rules on producing craft alcohol?  From what we learned through our interview with Paul, it is one crazy uphill battle.  Essentially once the alcohol is produced, you go through a distributer to put your products on shelves.  This process is not unlike the process that our local breweries use for getting their beer on local shelves.  Where it gets tricky is that distributors can only take on a certain number of bottles per brand, and these decisions are made by demand from the bars and stores stocking the alcohol.  Thus, Paul spends a huge amount of time branding Carve Vodka with tastings, samples, and face-to-face marketing with potential customers.  The key to that is showing what makes Carve Vodka special, and part of that is the process of creating it.  Paul explained, “Carve Vodka is distilled 7 times from 100% corn that way it’s gluten free.  I don’t advertise that yet though because the certification is a long process and I haven’t had time to do that yet.  We use coconut filters.  At the end of the day we have a vodka that compares to Stoli, Tito’s, and Ketel One.  We do really well in blind taste tests.  But, I still think it’s going to be hard in the end to make revenue like Bold City does.  There are so many people involved that the margins are low.  You just have to get out to the bars as much as you can.  Thankfully, Jacksonville is extremely supportive of small businesses.  I’m from Atlanta, people love their locally made stuff, but not like Jacksonville.  Everything that I do, people support.  They love it.  It makes it great for having a non-chain and a small entity.  I picked a perfect place to start this!” 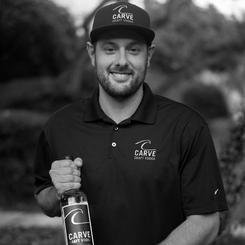 As for actually starting Carve Vodka, the idea came to Paul to create his own vodka simply because it’s what he liked to drink so he wanted to make his own.  Paul’s original occupation centered around IT and medical sales.  He laughed and said, “Honestly, I had an idea to make vodka and a passion and a dream and I was willing to do anything to figure out how to get there.”  So he did.  For his test runs, he had no idea how to home brew, so he went to a man in Live Oak to get some tips.  “On the guy’s website it had a picture of him holding a shotgun in front of a rebel flag.  He was a character.  He sold me this whole starter kit and he knew his stuff.  He was well versed in home distilling.  So that’s where it started, that was a 5 gallon still.  It was terrible at first because the fermenting process is huge and I wasn’t doing it right.  It’s the same process as beer.  You heat up mash, you add yeast, and you let it sit for 5-7 days.  I decided to go take classes so that I could learn how to make this process work.  I came back after that and it was so much easier!”

Far from a home brewer now, Carve Vodka is in over 300 places across Jacksonville, St Augustine, Pensacola, and a few beach towns with plans to expand to Georgia soon.  As it grows, it is taking the meticulously developed Jacksonville branding with it.  Paul’s first purchase when he moved to Jacksonville was a surfboard, so he wanted to incorporate that culture into the vodka.  The name “Carve” comes from the surfing term of “carving a wave”.  The bottle itself is beautifully designed to integrate the beach culture with subtle waves in the glass and ocean colored accents.  “The design process,” Paul reflected, “while it is a simple bottle and label, it took a while to get it to that point.  I wanted to show what’s great about Jacksonville.  I love the beaches.  I love surfing the poles and the pier.  We have a great city and I wanted to show it in the product.” 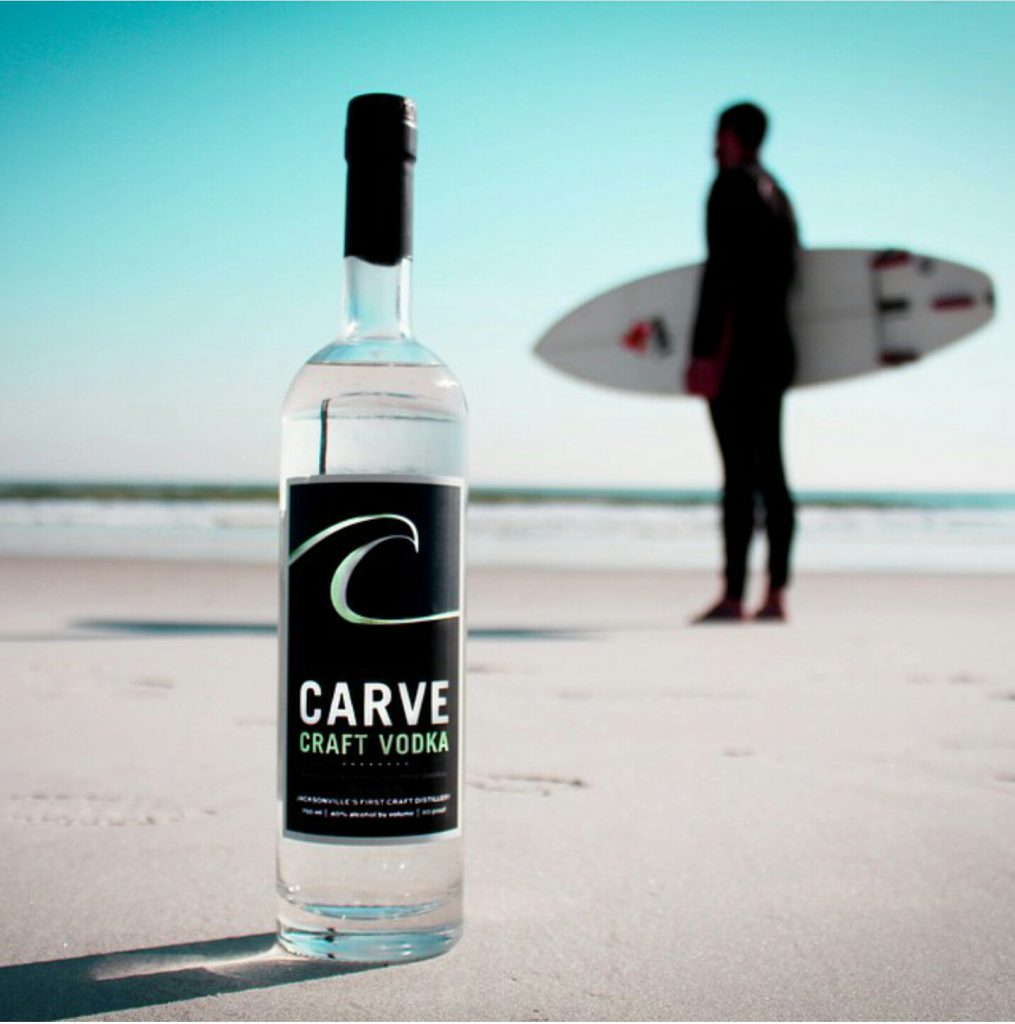 As far as how the production of Carve Vodka stands to other national vodkas, most vodkas distill three times.  Higher end vodkas, such as Tito’s, distill around six times.  Once you reach the fifth distillation and beyond, the filtering process is what makes a larger difference.  The filtering cuts the harshness down.  Carve distills seven times and filters three times, which is what creates the smooth, easily mixable taste of Carve.  Paul told us, “I’m really proud of it and I’d put it against any top end vodka.  We aren’t always first in blind tests but it’s always rated up there with them and that’s where I want it to be.  I just want to focus on making a great vodka.  I’m so lucky too that I’ve found what I want to do for the rest of my life.  My end goal is just to make great vodkas and conquer the world.”

As for the future of Carve, there are no plans for expansions on flavored vodkas and no forays into bourbons or rums.  Paul simply wants to focus on making the best vodka that he can.  He currently recommends mixing Carve with water and lime, using it in a Moscow Mule, or with cucumber water because they’re all light and refreshing.  If Carve ever did get the desire to expand their liquor repertoire Paul told us he would hire an expert in the industry after seeing how many small distilleries lose focus on quality when they’re trying to do it all.  The flavored vodka industry took a nose dive after they oversaturated and Paul has no interest in trying to force that issue.  Paul explained, “Great vodka has a clean palette.  It is odorless and tasteless, and can be mixed with anything.  I may do limited release flavors but it’d have to come from local products only, I want to keep everything within Jacksonville.  We want people to know how local we are.”  The craft alcohol industry is growing quickly in Jacksonville, with Carve at the forefront.  It’s great to see that all of our food and beverage industries are focusing on defining Jacksonville as a city that is willing to stand behind small businesses and their quality.  Thanks to Carve Vodka, now as we eat locally, we can drink locally as well.