We’ve bounced all over the city and found great restaurants in nearly every area of town. One neighborhood we’ve constantly struggled to find good ones in is Mandarin. We’ve found a couple we feel strongly our readers will enjoy like Paddy’s Pizza, Kazu Sushi, and Picasso’s. Other than that though there hasn’t been much. If you find something great over there please let us know!

Our search for quality Mandarin restaurants to recommend led us to The Red Elephant Pizza and Grill. Based out of Tallahassee, The Red Elephant  has seven locations, six of which are in Florida.

On our visit the restaurant quickly filled up with families. It’s a great place to take the kids and have a big crazy meal with the family. Obviously if that’s the environment you’ll want to avoid this spot on date night. The back corner of the restaurant has a mini arcade so when the kids finish eating and you want some time to hang out with the adults in your group you can hand the kids a 5 spot and send them off to the games.

According to the menu everything at Red Elephant is made fresh in house. They chop the veggies in house. They bake their own croutons. They make their own pizza dough. They even make their own salad dressings. The menu at Red Elephant really keeps it simple. Pizza, pasta, burgers, salads, soups, and sandwiches are what’s on offer. We kicked things off with the sausage corn chowder. It was a decent soup with tasty chunks of housemade sausage. The sausage was good and overall the soup was enjoyable although not particularly exciting. Since the restaurant is called The Red Elephant PIZZA and grill we had to give the pizza a shot. We’re fresh off our trek around Jax looking for great pizzas for our Top Pizza Places in Jax list, so we’ve got tons to compare it too. We decided to keep it simple on this occasion since there weren’t any of the crazy specialty pizza we usually shoot for on the menu (they did have specialty pizzas on the menu just nothing out of the norm). We asked for just pepperoni and green olives on the pizza. Green olives weren’t listed as a topping on the menu but since they’re my mother’s favorite toppings and she was my dinner date for the evening I asked if they could grab some from the bar to accommodate us. The waiter quickly replied that it’d be no problem. They get big points in the service category for accommodating a request that took a little more effort. Unfortunately when the pizza arrived I could tell just from eyeballing it that this pizza wasn’t going to be very good. The pizza was very doughy and lacked flavor. Even the cheese was fairly bland. While it’s certainly not Cici’s Pizza’s level of bad it was probably in the bottom 10% of pizzas we’ve had in Jax. It looked and tasted like a pizza you’d make at home with the kids. A medium pizza with pepperoni and green olives cost us $10.77. 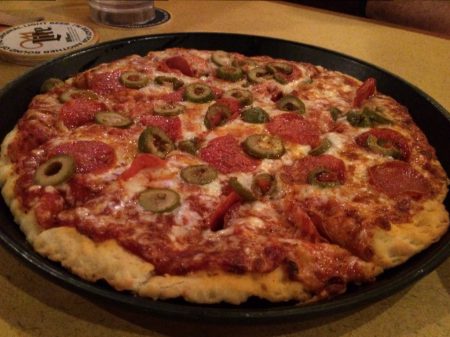 For dessert we tried the 1001 chocolate chip cake($4.99): 3 layers of chocolate cake filled with creamy chocolate mousse and chocolate chips. Finished with chocolate fudge and even more Hershey’s chocolate chips. If you have an extreme sweet tooth like me this cake won’t be for you. It has a taste more akin to the sweetness level of semi-sweet chocolate chips coming through with that slightly bitter flavor lovers of cocoa enjoy. Compared to other cakes we’ve tried around town we’d grade it as below average overall. While according to the menu they make everything fresh in house it grades around of the quality level of products restaurants bring in frozen. The other dessert we tried was the elephant ears (1 for $2.99, 2 for $4.99). These are big hunks of fried dough that will remind you of a funnel cake topped with cinnamon and sugar plus optional ice cream. These were fun and HUGE! One can definitely feed two people at the end of a meal. 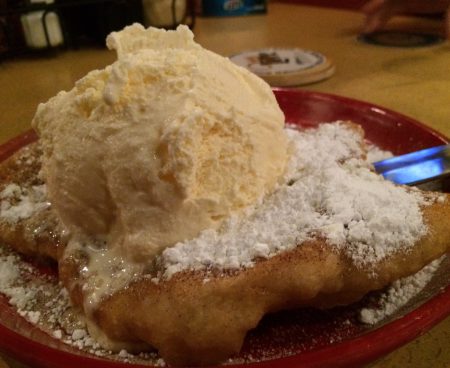 The service we received while dining at The Red Elephant was stellar. Our server Jonathan ranks among the best servers we’ve had at any price point in the city. If I owned a high end establishment I’d offer him a job today. He was on top of whatever we needed and exuded a spirit of caring that you couldn’t miss. There’s nothing like going to dinner and really being cared for in a way that feels like so much more than just another transaction. We also give the kitchen huge points for getting everything out in lightning speed. As soon as we finished a dish the next was right there immediately.
Overall we felt the food at The Red Elephant was fairly disappointing. If you’ve got pizza in the name of the restaurant the pizza better at least be good. The menu was one of the most basic and uninventive we’ve seen in Jax. Somedays you’re just in a the mood for something simple and affordable. If you’re having of those days I’m pretty confident that Red Elephant will fit the bill. If you’re looking for anything out of the norm it’s best to go somewhere else.