A wonderful benefit of our jobs as food critics is meeting some truly incredible, dedicated chefs that run the restaurants we frequent.  Chef Steve Thurston has been one of our favorites for years, as we have followed him from Good Food Company to Perrard’s and now to German Schnitzel Haus.  Chef Steve has 17 years of culinary experience off and on, and has been involved full-time in the Jacksonville culinary scene for the past 7 years.  Chef Steve took over German Schnitzel Haus only three weeks ago and has hit the ground running to simplify the menu and to provide authentic German offerings with locally sourced ingredients.

Coming into German Schnitzel Haus, Steve was limited in his German food experience.  For the first week, he worked in the kitchen and studied the preparations used with the previous menu.  He also found training in an unlikely place – Youtube.  He found German cooking demos actually in German.  Not knowing German, he used the videos to learn the techniques of German cooking and the basic ingredients in the dishes he planned to use for the new menu.  From there, he practiced.  Steve is a perpetual student.  He prepares dishes over and over again until he comes to the optimal preparation process and flavor profile.  He is committed to preparing all dishes from scratch on the new menu, versus the premade process that had been used prior to his arrival.  In fact, the German Schnitzel Haus freezer is now virtually empty as Steve is sourcing all food as locally as possible.  Steve said the reason behind the scratch made daily preparation is simple, “When the customers eat homemade dishes it brings them smiles and memories.  It invokes love and warmth.  Maybe it’s grandma’s potatoes that it reminds them of. A meal should bring them these memories.” 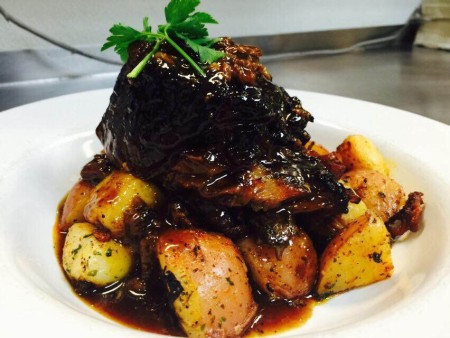 Prior to Steve’s arrival, the German Schnitzel Haus menu was seven pages long.  Many customers were overwhelmed by the amount of dishes.  Steve saw this as a great opportunity to trim the menu down to classic German items that would be expected at traditional a German restaurant.  The dishes that stayed are slightly revamped to be lighter and use more fresh ingredients, as German food usually is heavy on gravies and pickled vegetables.  The dishes will still include hearty portion sizes that customers expect with family style food.  Steve has also transitioned to using sunflower oil for all the fried items to give them a lighter and less greasy texture.  Chef Steve took me step-by-step through the new menu and highlighted the dishes he was the most proud of.  Stand out additions to the menu include pretzels that are made daily by hand from scratch, haus made quark cheese, and goulash made with braised beef. 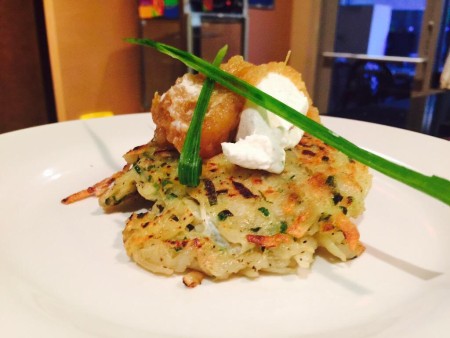 Many people are afraid of German food because of the heaviness and the overwhelming pickled flavors in a lot of dishes.  In fact, most often guests were ordering salads off the menu during lunch time instead of any German dishes.  German food doesn’t usually invoke “fresh” as a describing word, so that is what Steve was looking to change.  During Steve’s first week he studied what was being ordered from the menu at different times of the day and has added items based on demand.  Coming within the next week will be a ten item lunch menu featuring smaller portions and lighter fare and a perfect beer and brat pairing on a pretzel bun, as well as a bar bite menu towards the end of July.  Steve also livened up the salad menu and added German touches to even the most basic salads, including adding spatzle croutons to the Caesar salad.  There are also multiple vegetarian options that are now featured, including a stroganoff and a spatzle.  His hope is that as groups come in to dine, even skeptical eaters will be wowed by the menu and begin to try a larger variety of food from the menu. 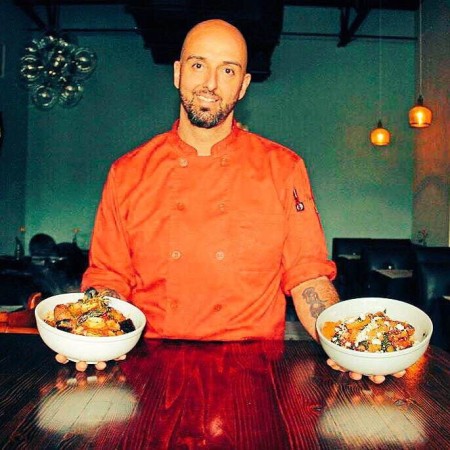 An essential part of Steve’s revamp of the German Schnitzel Haus includes the front of house management, which is now being run by Steve’s wife Lisa.  Lisa has extensive experience in restaurant customer service management and is taking the lead on providing an exceptional guest experience to go along with the improved recipes.  Steve spent a large part of our interview discussing how this is going to be an integral part of redefining the restaurant.  He told me that in some of his previous jobs, he let his ego get in between him and the customer.  He would often prepare food and know that the flavors were correct and the plating was impeccable, but the customers didn’t enjoy it because it lacked the soul and comfort behind simple, good food.  He’s ready to use these simplistic German recipes to get back to the purpose of cooking – watching his customers enjoy their meals and emotionally connect to the food and to each other.  Lisa will be reinforcing this by providing customer feedback as they roll out the new menu and solidify the recipes.  Their teamwork was seamless while I watched throughout the interview.  The restaurant immediately exudes a family style ambiance now.

If it’s been awhile since you’ve tried German Schnitzel Haus, it is time to go back.  Chef Steve and Lisa are quickly making this restaurant their own.  The passion Steve has for food is reflected brilliantly in his new menu and will make German Schnitzel Haus a stand out restaurant with time.  Chef recommendations include the Pork Braten, the Kasesspätzle (grown up mac and cheese), and the Schnitzel Holstein.  We challenge you to give German Schnitzel Haus a try and enjoy the bright, fresh new flavors and preparations by Steve Thurston.  You won’t be disappointed.