Leonardo’s by the slice is a popular fast casual pizza by the slice restaurant. It shares ownership with two other higher end restaurants (comparatively) in Gainesville- Bistro 1245 and Leonardo’s 706. We have some friends that swear Leonardo’s has the best pizza in Florida. When they heard we were going to Gainesville they implored us not to miss it.

Leonardo’s by the slice is located directly on University Ave, in a small building with a small parking lot on the side. It is just east of UF and takes advantage of the large amount of foot and bike traffic in the area. 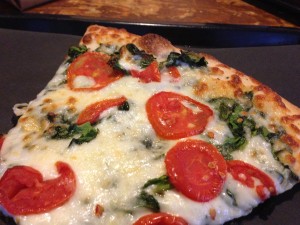 Leonardo’s by the slice has obviously been around and loved by patrons for a while. It is sparse upon walking in, no doubt for the line that forms during peak times (like after games at the swamp). The linoleum on the floor in front of the counter and in front of the soda fountain is completely worn out. You can see the previous floor that is under the linoleum. There are plenty of wobbly tables and not quite matching chairs. This isn’t your mama’s pizza place. It’s very much a college kid’s pizza place.

It’s been our experience that pizza by the slice is just a tad less delicious than a fresh, made to order pizza. Our trip to Leonardo’s by the slice was no exception. We had a Spin Tom (mozzarella, spinach, tomato, garlic, oregano) and a thick slice of pepperoni (thick slice with pizza sauce, mozzarella, pepperoni). With both slices, they were already made when we walked in and each slice was placed in the pizza oven for a few minutes to heat it up. They were good, but they didn’t shatter everything we had known about pizza. The Spin Tom was your typical thin crust, generous sized slice. The crust had a great garlic flavor and wasn’t greasy at all. The thick slice pepperoni was good if you are a deep dish pizza lover. It didn’t seem to have any more cheese or pepperoni than a thin crust slice, just more dough.

The service at Leonardo’s by the slice was decent. A girl at the counter took our order and they called us when the pizza was ready. She answered a few questions we had. It was pretty straightforward. 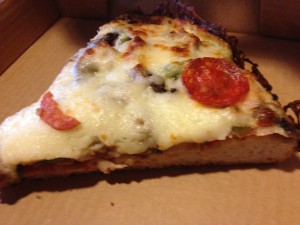 The one standout at Leonardo’s by the slice was the restroom. There were these little hand painted signs (a triangle with a circle head and a rectangle with a circle head) on the walls with arrows, pointing the way to the bathroom. When I was headed there I started to become concerned because I went out the back door (why am I going outside?) and around a few corners, following these little “restroom” picture/arrows. When I found the restroom, it was what one might call a “one seater”. Fine, no big deal. But when I walked in, I turned around and walked right back out. It was just nasty. I really had to go too so I psyched myself back up to walk in there. I’ve spent time in Italy (they’re not exactly known for their neat and tidy restrooms) and now I always look at restrooms through that lens- better or worse than Italy? Definitely worse. In fact, since Leonardo’s is Italian, maybe this restroom was a nod to that. If that was the case, the entire country of Italy should be offended. I’ve seen cleaner gas station restrooms in Georgia (another place not known for their cleanliness of restroom).