Update: Catullo’s Food Truck is closed as the Catullo brothers are transitioning to a brick and mortar restaurant. More pasta coming soon!

A few months ago word started circulating around JRR that the best Italian in Jacksonville was coming out of a new food truck called Catullo’s Italian.  One of us tried their food and continuously encouraged the rest of us to go out and find the truck.  My schedule and Catullo’s schedule did not cooperate for awhile.  I finally committed to going out to see them at a rally.  For a rally, most trucks run a limited menu for efficiency’s sake, so I had 4 choices that day.  I drove downtown, got an order of ravioli in their rosa sauce to go, and drove back out to my apartment at the beach.  I opened the ravioli, took one bite, and almost cried.  I promptly finished that order, texted my co-worker to meet me downtown, and went back for a second order of ravioli.  To recap: I drove a combined 2 hours round trip for two orders of ravioli.  That’s how amazing Catullo’s food is.  Since then I’ve followed the Catullo’s boys diligently around the city to try more and more of their incredible hand made, from scratch, generations old recipes for pasta, pizza, “sangwiches”, and roll ups.  Now that I’ve worked my way through their menu I’m confident in backing the following bold statement: The BEST, by FAR, Italian food in Northeast Florida is coming from Catullo’s Italian. 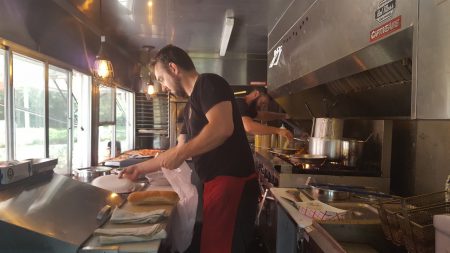 Catullo’s Italian is led by brothers Carl and Dave Catullo.  They grew up in a traditional Italian family led by their mother, who Carl says is the best cook in the world.  Carl began cooking professionally at 19 years old at Santioni’s in Sawgrass, then for Paesano’s.  Both were originally owned by Bruno Santioni, then Paesano’s was sold to Ryan and Sean Thomas.  Carl credits a tremendous amount of his knowledge to working for these culinary powerhouses.  This is where he learned classic technique and preparation of sauces and pastas.  The time was right for Dave and Carl to branch out on their own.  From there, Catullo’s Italian was born.  This immaculately branded truck could write the book on how to create a small business.  The Catullo’s logo is prominent everywhere you look from the truck itself to the tables.  Quiet touches of Italian culture, like softly playing music, sweeps the patrons out of Jacksonville and into a whole new world.  These subtle attributes of the brand have you already falling in love before the first bite.  As I mentioned, I am now a Catullo’s Italian expert (re: addict), so below I will recap my favorite experiences I’ve had dining with them. 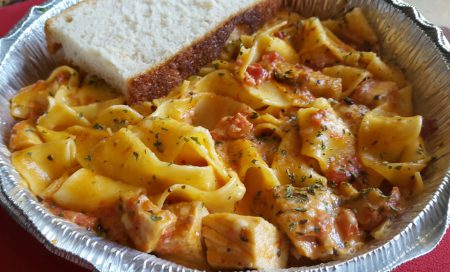 Uno: The Divine Ravioli/Raviolo.  I’ve tried Catullo’s cheese stuffed clouds of heaven two different ways.  The ravioli is the aforementioned 2 hours of driving experience due to the tender, melt in your mouth, fresh pasta and the depth of the rosa sauce.  I actually kept the leftover rosa sauce to use on more bread the next day because I truly couldn’t fathom throwing away my container with even a drop left that could have been utilized.  This is one of Catullo’s more simple pasta presentations and the elegance of their food exists in the fine details.  A touch of herbs brings an earthy and clean taste to the sauce, while the tiniest bits of tomato add acidity to the creaminess.  I am in love with the ravioli.  I can’t imagine a more perfect food.  The Raviolo, a special recently run, was the richer, more intense sibling of the ravioli.  These were roughly the size of my hand and had a creamy egg yolk center that takes the trendy hashtag #yolkporn to a new level.  Topped with fresh sage, rosemary, bacon, and a butter sauce, the Raviolo is one of the most sinfully decadent savory foods I’ve eaten in recent memory.  I later found out this was an experimental recipe of sorts, but I can honestly say it’s one of the most well executed pastas I’ve ever had.  Aside from these pastas, I also tried an Arrabiata that showed me the Catullo’s boys are not afraid to bring the spice and heat to their dishes. 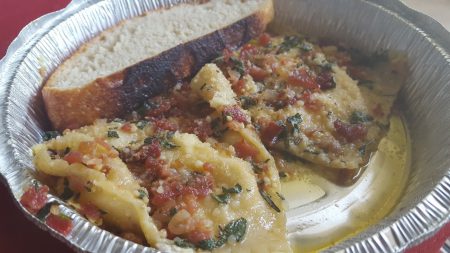 Due: A lesson on the “Sangwich”.  I was mildly stressed to order this item because I didn’t understand the word.  Thanks to Google, I can now have a teaching moment.  A “sangwich” is made of Italian or French bread (provided to the Catullo’s truck by local Cinotti’s Bakery) and layers Italian style cold cuts, meats, and cheeses along with lettuce, tomatoes, and peppers.  According to Google, a mere “sandwich” is simply anything else you throw on bread (clearly there is indication of it being lesser quality in this definition).  The sangwiches at Catullo’s are the real deal, coming in heavily loaded with fresh ingredients.  We opted for the Meatball sub ($10) which featured housemade meatballs, marinara sauce, and provolone cheese which is finished in the pizza oven.  I have a lot to say here, because on a normal day I will always choose chicken and cream based sauces over beef and red sauces.  Not here.  Not with this sangwich.  I will crave it every day forever probably.  The soft, sweet, crusty bread holds several massive all-meat-no-filler meatballs that are just ridiculous.  The bread absorbs the rich and buttery tomato sauce so that every bite is as rich as the next.  They also do not skimp on the provolone, this is a cheese lover’s paradise.  You’ll be full and happy from these hearty sangwiches. 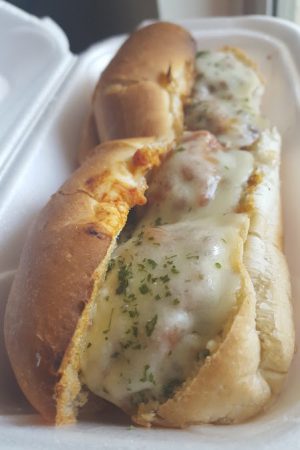 Tre: What is a Rollup?  Something you need.  Trust me.  Catullo’s describes this menu category as “Not a calzone, not a stromboli.  It’s something different!”.  My best analogy is the amped up version of the catering favorite pinwheel.  We chose the Dirt McGirt (2 slices for $5), which are stuffed with seasoned chicken, roasted red peppers, ricotta, garlic, provolone, mozzarella, and balsamic glaze.  I didn’t expect the beautiful sweetness the balsamic glaze would add to this treat.  Each bite has a sweet and savory balance that leaves you satisifed no matter what your original craving was.  This makes an excellent sharing appetizer or “small plate” to complement any other menu item.  Other snack sized items worth trying are the mozzarella sticks, because fried cheese, but also because their marinara they serve with it is probably the best I’ve ever tasted.  It’s hearty and a little spicy to amp up the mild mozzarella and crispy breadcrumb coating. 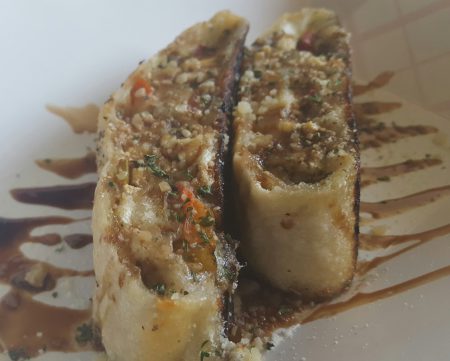 Quattro: PIZZA!  I haven’t tried the pizza at Catullo’s yet because I’m getting married to the pasta, but my friends that have had it loved every type they tried.  The daily flavors are the crowd favorites – cheese, pepperoni, Italian sausage.  The special flavors, though, are where things get interesting.  Think grapes, olives, caramelized onions, peppers of all varieties, and even buffalo chicken. There’s really something for everyone at this truck.

Catullo’s daily schedule can be found via their Instagram or Facebook.  This is a truck to keep an eye on.  I’ve eaten Italian food all around the country in my life and it has never been as memorable as Catullo’s.  Our writer Lisa took one bite and exclaimed that it tasted just like her memories of Italy.  This is the real deal.  Each entree is made absolutely 100% from scratch and it’s evident in every bite.  The Catullo’s brothers are going places and the truck is only the beginning for them.  What an explosive beginning into the Jax food scene it has already been though.  What excites me the most is that as a new truck being open just a few short months, there is only room for them to grow from here.  This is the soul warming, passion filled Italian that we’ve yearned for.  “Mangia,” as the brothers say, and enjoy!

Want to stay apprised on the newest and best food trucks in Jacksonville?  Follow our sister brand @findjaxfoodtrucks on Instagram! 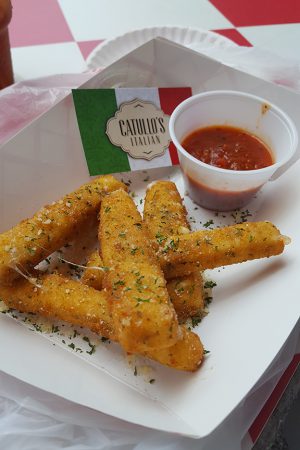