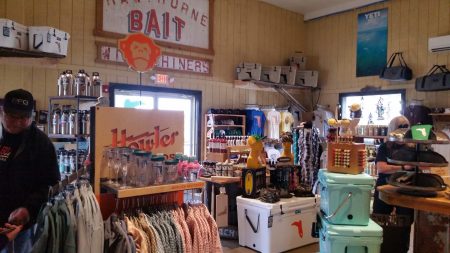 We looked through the store for a bit, but I’m not much of an outdoorsman. We then made our way to the restaurant portion of the building. There’s a countertop, a decent sized dining room, and an outdoor eating area. There’s also a bar area. On the day we visited, they also had an outdoor liquor truck selling Bloody Marys for brunch. We were seated and waited about 15 minutes before anyone took our drink order. We came during brunch, so we decided to ask the server what are some of Florida Cracker Kitchen’s signature items. She suggested the Homemade Cinnamon Roll, the “World Famous 10,000 Island Shrimp and Grits,” and the Florida Cowboy Classic.

We put in our orders and our food came quickly. A little too quickly. We waited longer for the server to take our drink order when we first sat down than it did for the food order to come to the table. The swiftness in which our food came to us made me believe it was sitting in hotel pans in the kitchen and scooped out on to the plate. I appreciate a fast turnaround from the time I place my order to the time it hits the table, but at least make me think you prepared my food somewhat to order. So right from the start, I was giving my food the side eye. 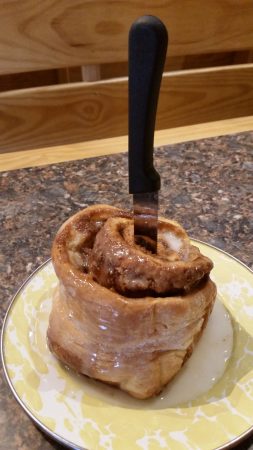 Let’s start with the Homemade Cinnamon Roll. As much as I hate to admit it, Cinnabon is the yardstick by which I judge how good or bad a cinnamon roll is (don’t judge me). Cinnabon may be an unfeeling, faceless, corporate conglomerate, but they have got the cinnamon roll making process down to a science. I love a cinnamon roll that is slightly doughy in the middle, fluffy and tender throughout. The filling should taste of cinnamon sugar and butter, with the icing complementing, but not overpowering.

Unfortunately, Florida Cracker Kitchen’s Homemade Cinnamon Roll was none of these things. It was crunchy, overly dry, and worst of all, cold in the middle. It was sweet and decently sized, but I only could tolerate half of it. I was offered more icing on the side when I mentioned how dry it was, but icing should never hide a poorly made cinnamon roll, it should highlight a perfectly made one. This cinnamon roll may have been “homemade,” but it tasted like it was homemade a few days prior, thrown in a microwave, and presented to us as “fresh.” Say what you want about Cinnabon, but at least you can see cinnamon rolls being made fresh right in front of you and if you want one fresh from the oven, you can have one. 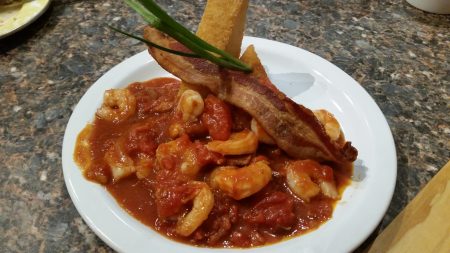 One thing I learned watching Gordon Ramsey’s “Kitchen Nightmares” is when a restaurant names an item on their menu as “World Famous” or “Award Winning” generally it’s more of a psychological tool to push certain menu items or convince you its better than it really is. So it was with the “World Famous 10,000 Island Shrimp and Grits.” Their version of Shrimp and Grits is made with grit cakes, shrimp, “Granny’s Tomato Gravy” and bits of bacon. I’ve never had tomato gravy with shrimp and grits and this version did nothing to sway me in ever trying tomato gravy on shrimp and grits ever again. This tomato gravy had the taste and consistency of the sauce that comes in Chef Boyardee cans of ravioli; thin and sickeningly sweet. Look, shrimp is naturally sweet. Roasted tomatoes, if they actually did roast their tomatoes, are naturally sweet. Even canned tomatoes are sweet. Add a heaping ton of brown sugar to the mix and it’s going to taste like you melted a Jolly Rancher and put it on a couple of dry grit cakes. The shrimp was also a touch overcooked and the grit cakes were bland. The only thing “Famous” about this dish is that it’s now “Famously” bad. I’m not for sure which of the 10,000 Islands this recipe came from, but Grandma should have left it there next to Wilson from “Cast Away.”

The Cowboy Classic was the other signature Florida Cracker Kitchen breakfast item. It’s basically corned beef hash, eggs, and toast. Their corned beef is made in house and they pride themselves on not using the canned stuff. I think I would’ve preferred the canned stuff. Their corned beef had this weirdly sharp, overly acidic taste to it that made my face contort funny, look down at my plate, and dig through it to figure out what’s going on. I’ve had my share of corned beef, both canned and house made. I don’t remember ever using the words “sharp” or “acidic” to describe corned beef. Corned beef should taste a little briny, a bit salty, and a tad sour. But not so much that you forget you’re supposed to be eating beef. I described to the manager what their corned beef tasted like and his response was more or less, “That’s how we make our corned beef. It’s supposed to taste like that.” Well if that’s the case, tell the Cowboy who made my corned beef hash to hang up his spurs. 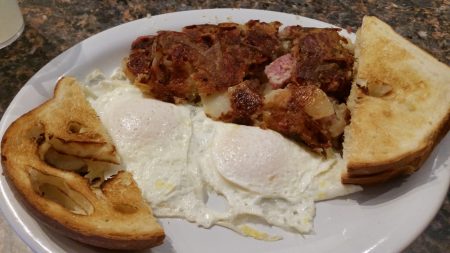 Overall, this was probably one of the most unpleasant meals in recent memory. When the manager came back by and asked how everything was, I told him such. I wasn’t looking to get a free meal, just give some constructive criticism. I was specific in my critiques and presented him with my debit card and the check to pay for the meal. The manager said he would comp the meal if we promised to come back and give them a second try. I said we would and we planned to come back the next day.

24 hours passed and we arrive to give it another shot, hoping for a better meal than the one previous. For Round 2, we decided to go with some classic Southern brunch items: Chicken and Waffles and Fish and Grits.

Florida Cracker Kitchen’s Chicken and Waffles is a basic Belgium waffle, topped with chicken strips, and dusted with powdered sugar. I ordered it sans powdered sugar. I also decided to drizzle honey on my chicken and waffles instead of the traditional maple syrup. The waffle was decent. Not show stopping, but serviceable. It was what a waffle should be; light, fluffy, and airy. It wasn’t the best waffle I’ve ever had, but neither was it the worst. The chicken, on the other hand, was not good. It was dry and stringy. Every bite of it sucked the moisture right from my mouth, making it feel like I was chewing a ball of yarn. No amount of honey or butter was helping its cause. 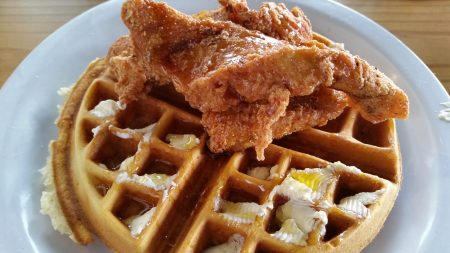 My dining partner and I were divided on the Fish and grits. The platter consisted of fried catfish, grits, eggs cooked to order, and a biscuit.  The grits, biscuit, and eggs were basic and unremarkable. The part of the dish we were divided on was the fried catfish. We both thought it was cooked well; crispy, not greasy, the fish was tender and flaky; however, I thought it was woefully under seasoned while my dining partner said it reminded her of how her mom used to cook it. After some robust dialog about what a seasoned fried catfish should taste like; comparing what we were eating to better Fish and Grits of other restaurants we’ve been to, I decided I’d rather be a husband than be right, so we agreed to disagree. 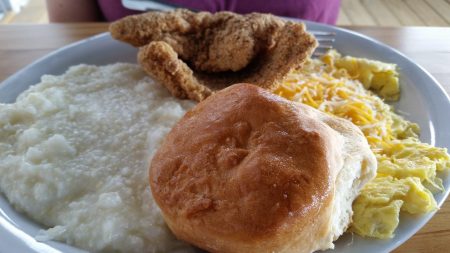 Jacksonville is the brunch-iest town I’ve ever lived in and there are too many great breakfast/brunch places for Florida Cracker Kitchen to put out the kind of mediocre product they do. If you’re looking for a YETI cooler, can coozy, insulated coffee cups, fishing gear, or T-shirts, then this is the place to be. But if you’re looking for good, Southern inspired dishes, particularly for brunch, you’d do better eating at the other restaurant with “Cracker” in the name. 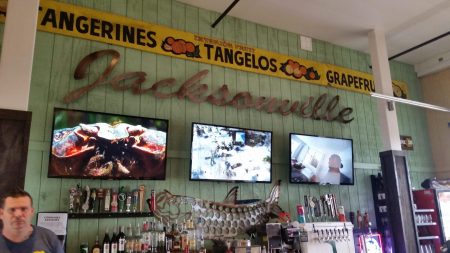