Unfortunately Tea Haus is no longer open for business

On Instagram recently we ran into what looked like a neat little tea and pastry shop in Jax Beach. When we got the invite out to Tea Haus, it ended up being that and so much more. Ancient healing traditions throughout many cultures involve the simple practice of drinking tea. Tea Haus was born out of Sarah Paige Wilde’s hope to make this tea drinking way of life and these healing properties accessible to the public in Jacksonville. As the Tea Haus project has grown, a team of people each offering something a little different has hopped on board to add their talents to the mix. Tea Haus is actually located in a little house attached to a few other businesses in a quaint strip mall that’s a lot more cozy than what you’d think when you hear that term. As you walk in the front door, on the left you see shelves of loose leaf teas along with some pretty sweet fair trade bags from Fuse Fair Trade. To the right is the front counter where there’s a case of all sorts of things to eat and drink. Delicious locally sourced, vegan, non-GMO, and gluten free foods sit next to cold pressed juice, kefir(a kind of water flavored with fermented fruits), a few sweets, and more.  Beyond this first room lies treatment rooms for acupuncture, a nice open room where it appears yoga classes take place, and a wonderful backyard just out the back door where the beginnings of a garden are taking shape. The vision for that garden is that in a few months you’ll be able to walk out back and pick vegetables you’d like to eat and have the chef make you something with them on the spot. 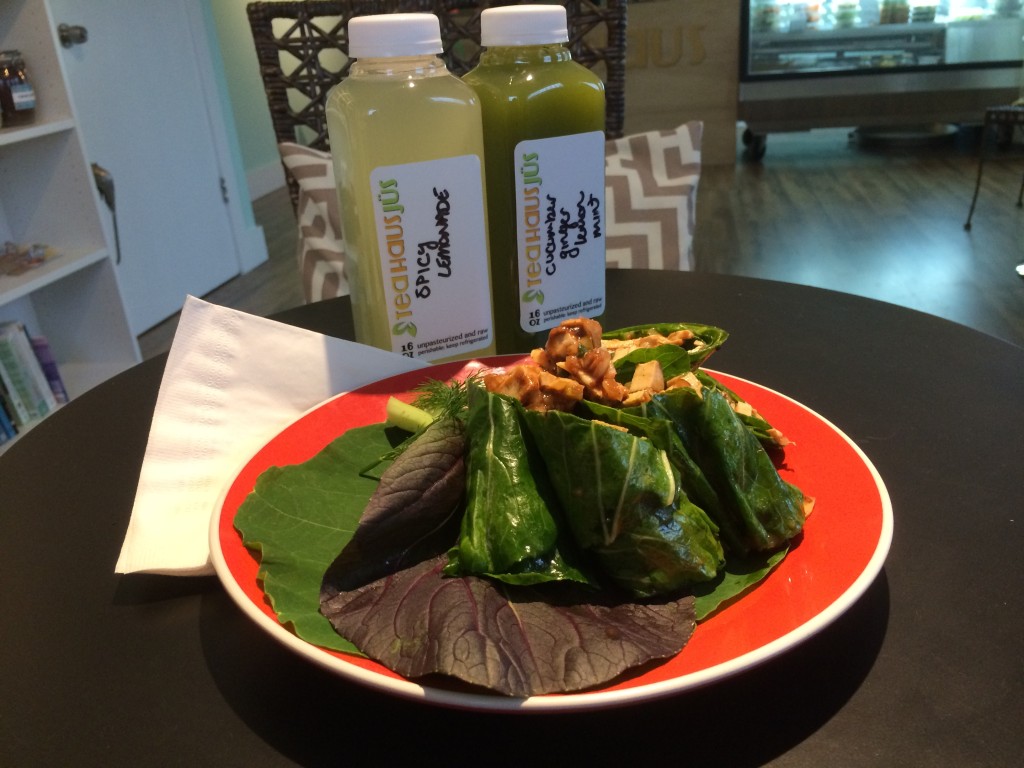 Hours: 10am to 6pm Monday through Saturday

Let’s take a walk through each of the offerings at the Tea Haus one by one. We’ll cover food last. So if you just care to read about the food you can skip down to the food section. 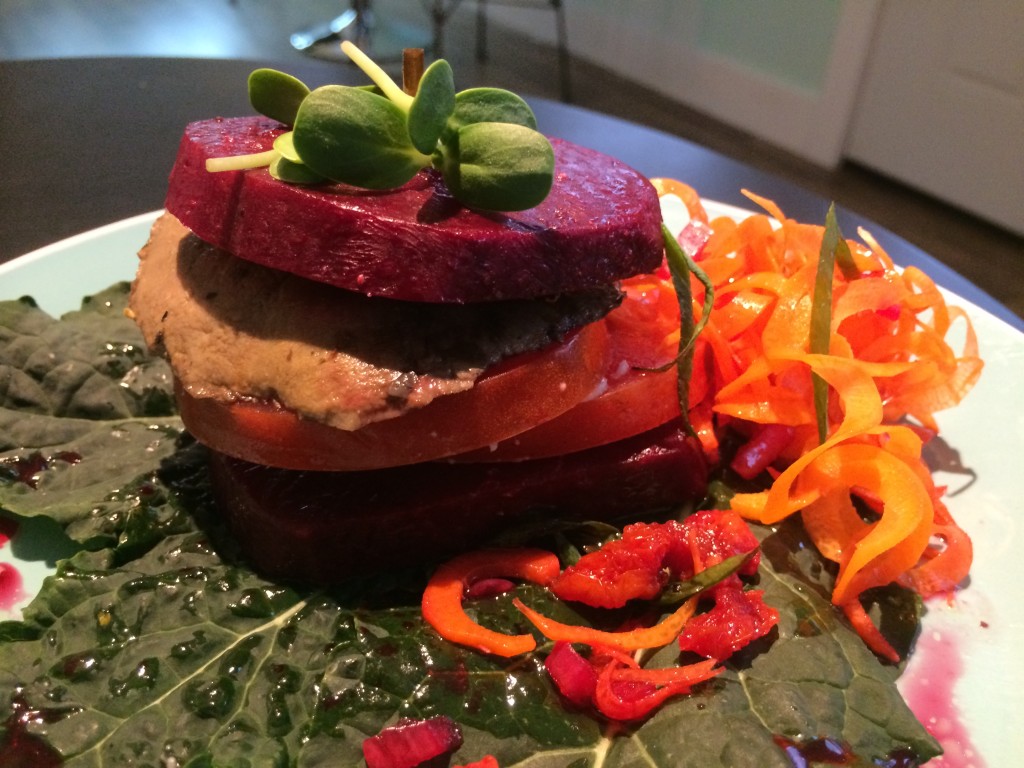 Kefir: A water with fermented grains and fruit flavors that is said to offer healing properties. In addition to kefir we’re told kombucha is on offer as well.

Cold pressed juice: Juicing, or drinking vegetable and fruit juices for health has become increasingly popular across America over the past couple of years. If you haven’t heard of it you may want to check out the documentary Fat Sick and Nearly Dead on Netflix. In Jacksonville, previous to Tea Haus the only juice we found available was made using a centrifugal juicer which is good for roughly 24-48 hours. Juice made with a cold press retains nutrients much longer and is typically considered to have a life of around 7 days if unopened. When we were contacted by Tea Haus I had actually just spent time scouring the internet for a place to get cold pressed juice and couldn’t find one. If you’re going to juice fast for a week and don’t want to make your own juice getting cold pressed juice is the way to go. That way you don’t have to head to the store every 24-48 hours to get juice. I’ve had a chance to try a number of juices made by Tea Haus’ juice maker Trevor Wilde. As someone who’s done quite a bit of juicing personally I can tell you he’s fantastic at getting the balance of each fruit or vegetable just right. 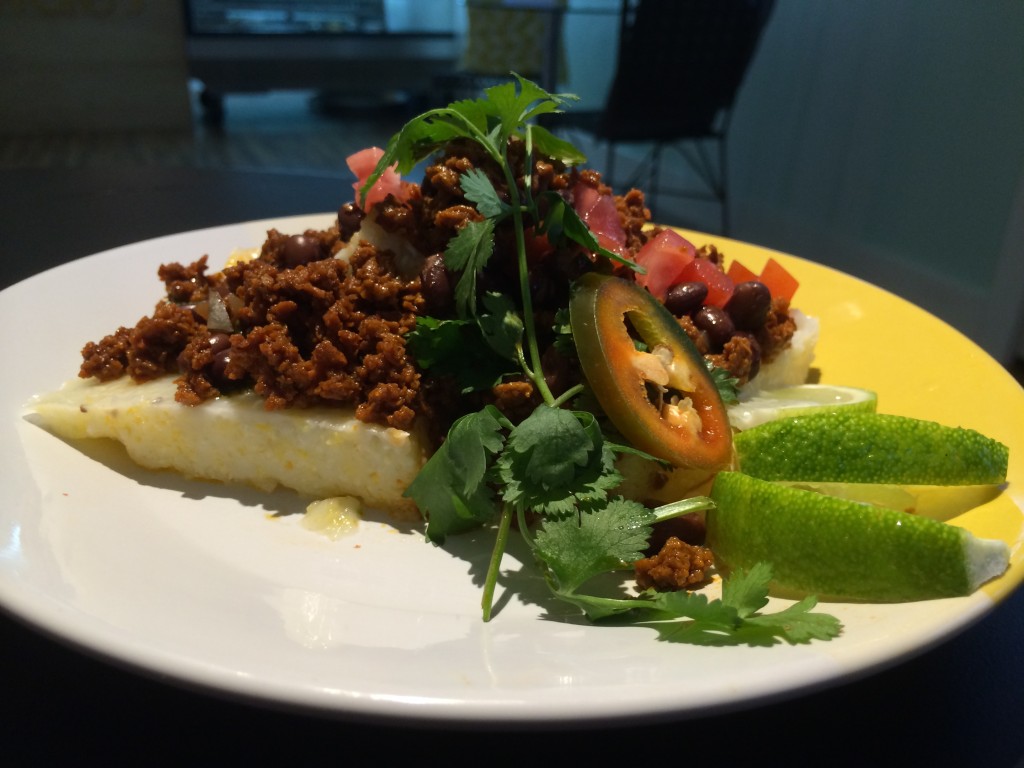 Alright, now let’s talk food. All foods offered at Tea Haus are vegan, gluten free, and non-GMO. Sounds like bland boring and no fun to many folks. However, we found it was anything but those things. It was much more along the lines of unique, flavorful, and delicious. Chef Rosaria Anderson makes 3 trips a week to local farms to pick out produce fresh from the farm so that Tea Haus can offer the freshest and highest quality produce around. There’s something to be said for the higher nutrient content that’s found in vegetables harvested within 48 hours of eating them. Chef Rosaria creates 4 or 5 different meal options on offer each day that are offered as grab and go options or available to be plated and served while you’re at Tea Haus. While we were there we got a chance to try a few different dishes. First up were the BBQ chicken wraps. These were pretty tasty. You could taste how fresh the wraps were. The “chicken” had a mild BBQ flavor and surprisingly the texture was pretty close to that of chicken. If I were in the mood to have something healthy to eat I’d be really happy I chose these. I definitely enjoyed them. Another dish we got a chance to try was the ratatouille. This stuff was darn good. A really nice mix of flavors from fresh produce and spice offered a wonderful healthy and delicious dish. Next up was the vegetable stack (I actually didn’t get the name so that’s what we’re calling it). This one I can’t really critique because it contains beets and raw tomatoes which are two things I’m not a huge fan of. I wouldn’t have mentioned it if I didn’t love and want to include the photo we took of the dish. Next were the hemp balls. They sound weird, but they’re not. These are basically little balls of dates hemp seeds and a few other ingredients that taste like a healthier version of candy. If you like dates you’ll really enjoy these. I know that I did. Last but not least was the chorizo and grits cakes. This dish was the star of the show. After one bite I was wondering, “Why do I eat meat again?” I normally despise meat substitutes because they never taste like meat. They usually look like meat and sometimes even smell a bit like meat but they rarely taste like meat. This vegan chorizo tasted like spicy ground beef. It had the right look, smell, taste, texture, and flavor. I was blown away! The grit cakes were really nice too. Good texture and flavor and definitely not fried. If you like deliciousness you need to try this dish. I’m fairly sure this dish is just offered on Tuesdays since the offering changes every day. So, call ahead to make sure it’s available if you’re coming just for this one. 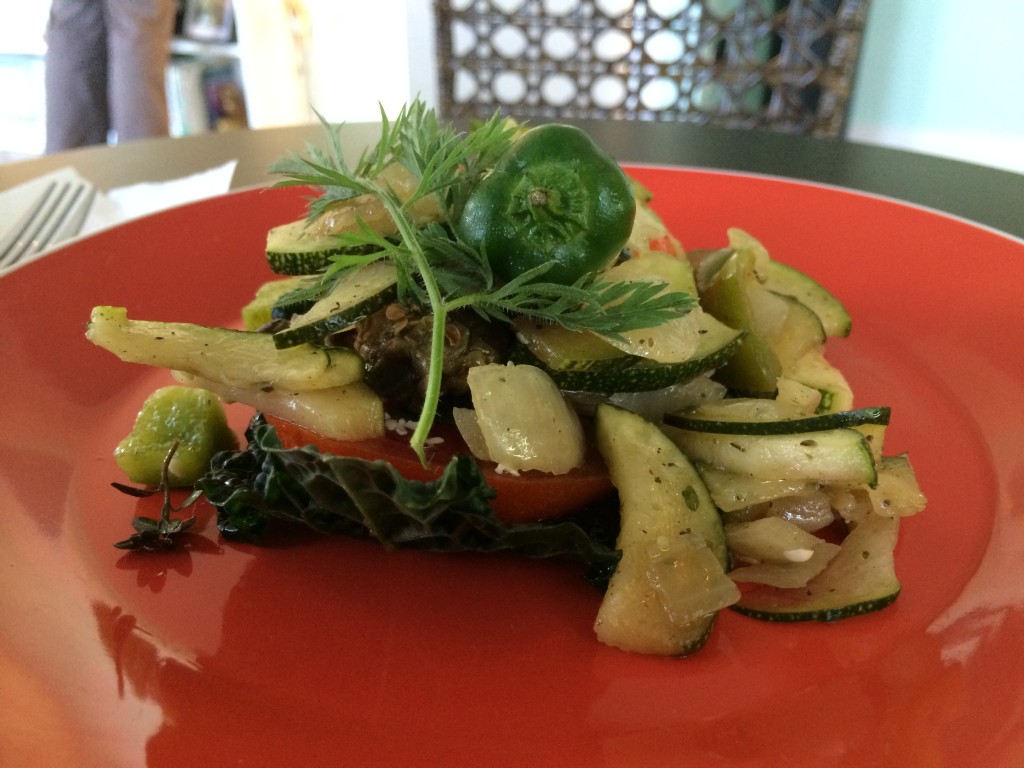 Last but not least Tea Haus offers gluten free vegan baked desserts. The selection is small and seems to change daily and ranges from cupcakes to brownies. On the day we were there the baked dessert on offer was a s’mores brownie. The flavor was amazing. A nice crunch from the graham cracker cookie on top, marshmallowey goodness from the marshmallow in the middle and and a nice medium chocolate flavor from the brownie itself gave each bite a beautiful layering of flavors. The texture was a little grainy for me and did remind me of other gluten free treats. However, the texture itself wouldn’t keep me from having one again next time I’m at Tea Haus. 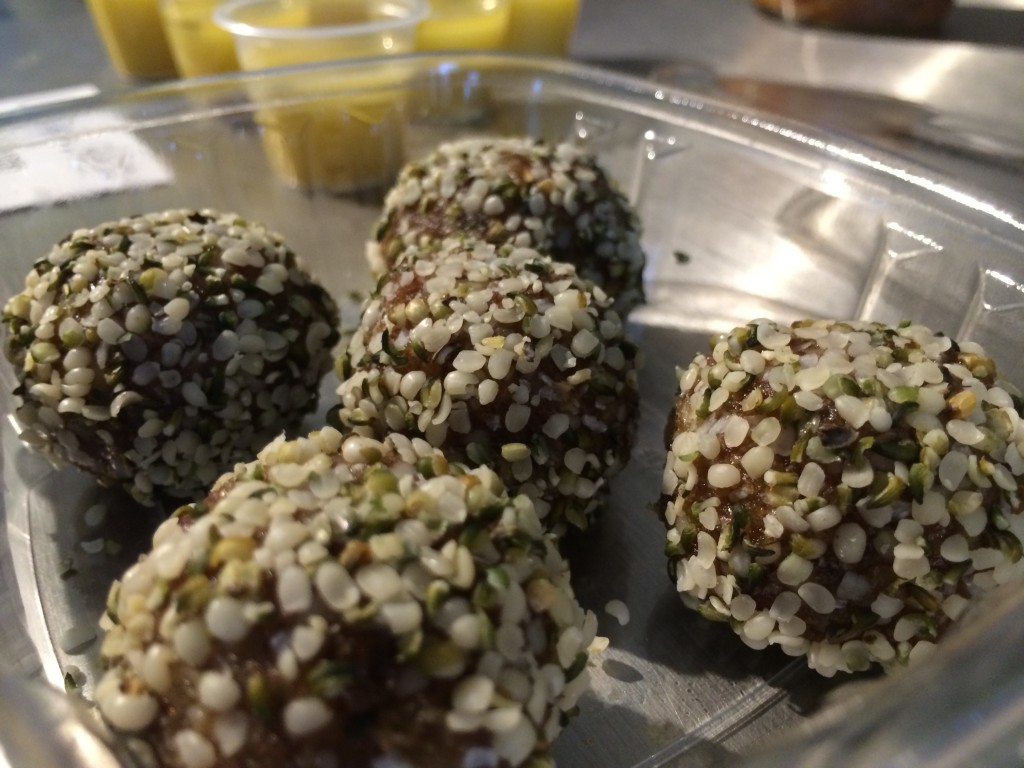 There’s a style of cooking they’ve perfected at 13 Gypsys in Riverside where they take simple ingredients, pair them with the right spices, season well, and execute near perfectly. The dishes are basic but they are somehow always exciting. I feel like Tea Haus puts together vegan foods in much the same way. They take simple ingredients and get just the right mix of freshness, flavor, and texture. I have a feeling that Tea Haus will be a place we go for a healthy bite to eat for a long time to come. Stop in any time between 10am-6pm for grab and go foods, loose leaf teas, or sit down for a cup of tea and eat in. 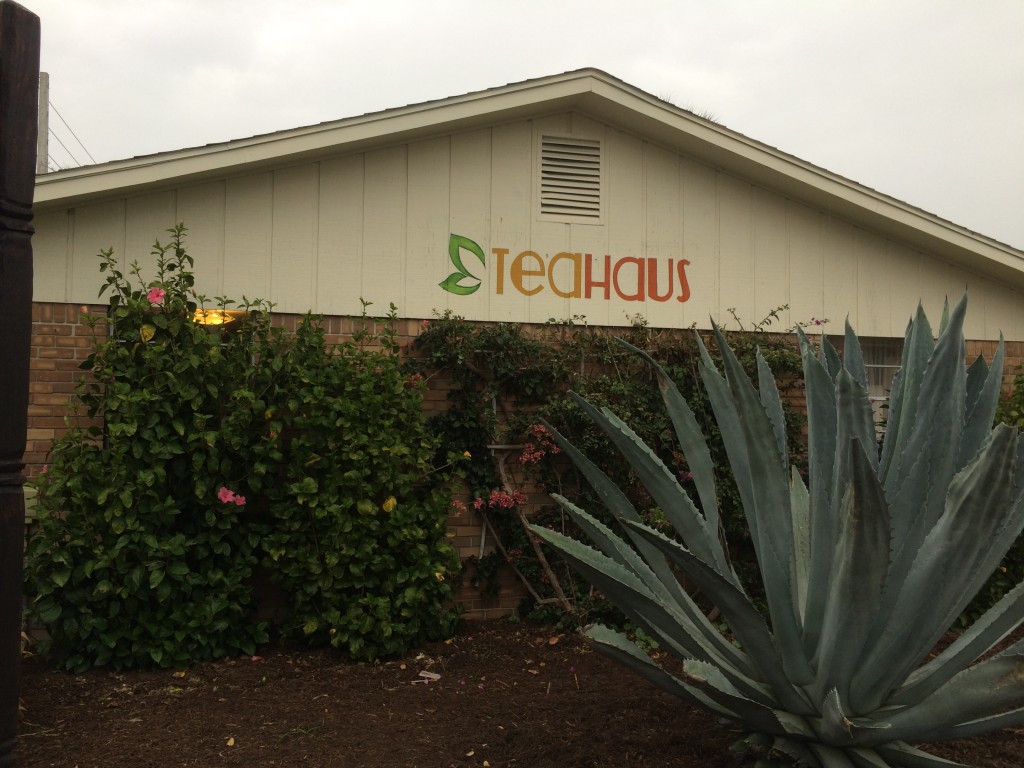 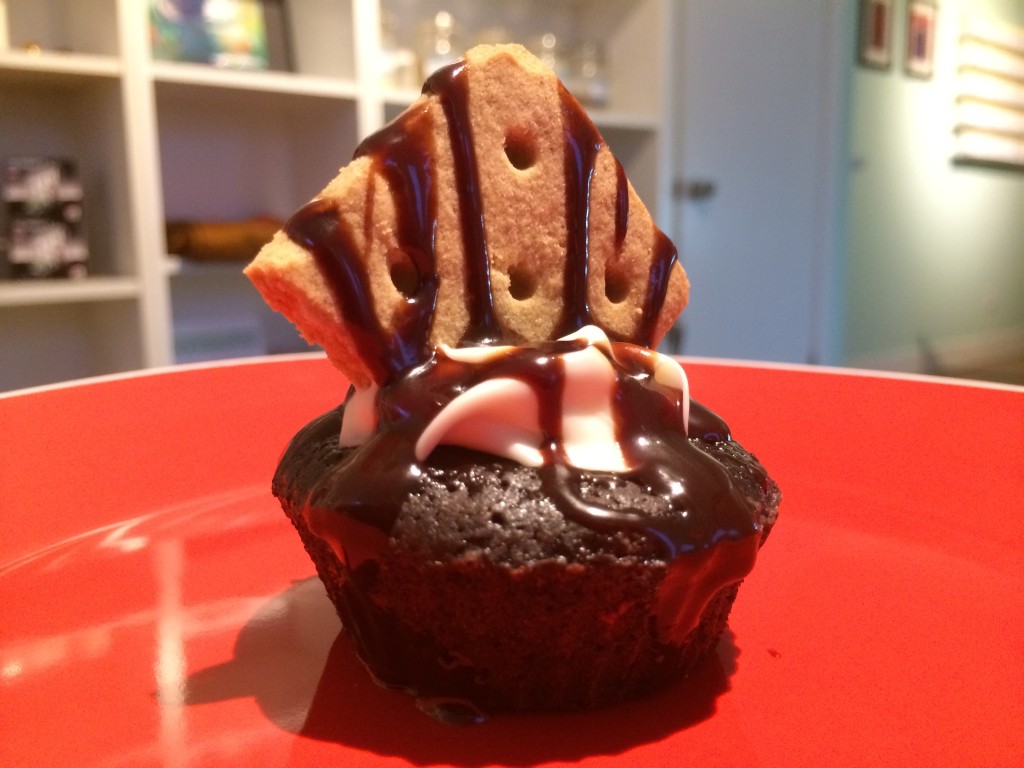