Unfortunately Dirty Reds has closed.  We’ll miss them and keep you posted if they pop-up elsewhere in town.

Open only 14 months, Dirty Reds is a little hole in the wall spot just over the intercostal bridge in Atlantic Beach. The restaurant is tucked away in a strip mall with a dance studio and a martial arts gym. That’s not exactly a spot I expect to find a great restaurant. But, we’ve been surprised before. I pulled up and couldn’t find parking so I parked next door at a bank. When I got out of the car and started walking toward the restaurant I was immediately hit by the wonderful smell of smoked meats. Talk about a good sign! Walking up to dirty reds it doesn’t look like much. I’m not sure what I expected but what we found blew away even our wildest guesses at what lay behind the front door of the restaurant. We walked into a restaurant that reminded me of a cool blues club in Nashville (Tuesday nights are blues nights at Dirty Reds). The place was packed. The music was great. The vibe was unlike almost anything we’ve found elsewhere in Jax. The decor and the space even fit with the hip little Nashville Blues bar feel. This place redefined cool. This left us thinking, “If their food even comes close to living up to the atmosphere we’ve really found something special.” Dirty Reds bills their food as a cross between southern and Cajun cuisines so we definitly had high hopes for deliciousness. We weren’t disappointed. 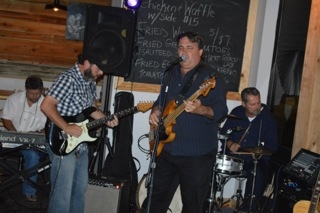 So did the food live up to the atmosphere? Absolutely! These guys have a Cajun take on fried green tomatoes with shrimp that is out of this world! The sauce is full of flavor. The breading is tasty and crunchy. The shrimp is awesome too. This dish really wowed us. This is the one I wouldn’t miss on a visit to Dirty Red’s. If you come and don’t order it you can only blame yourself. Next up were the Jumbalaya eggs rolls. These were good. If you’re into egg rolls you’ll probably really like them. Too often typical egg rolls have one or two flavors that dominate the taste of the roll. There were layers of flavor in these that gave them a really well rounded and interesting taste. There was also plenty of meat, rice, and veggies. Next, we tried the gumbo. Unfortunately we really didn’t like it. It had a dark dirty sort of taste to it that I’m not sure I can adequately explain. I wouldn’t order it again. Next we tried the Smoked sampler for 2($29) which included ribs, pulled chicken, and brisket. This is a mountain of meat served with garlic bread. The brisket was so tender it was falling apart. It was clear it had been smoked a really long time. It almost had the texture of pot roast. The meat had a nice deep smoky flavor we enjoyed. The sausage we tried had a flavor that I’d almost describe as sweet. It was enjoyable without being overpowering like sausage can sometimes be. I’d order it again. The pulled chicken was great also. Again, another meat with a smokey flavor that was delicious. The ribs had an above average dry rub and with a bit of their house smokey BBQ sauce added they were pretty tasty. 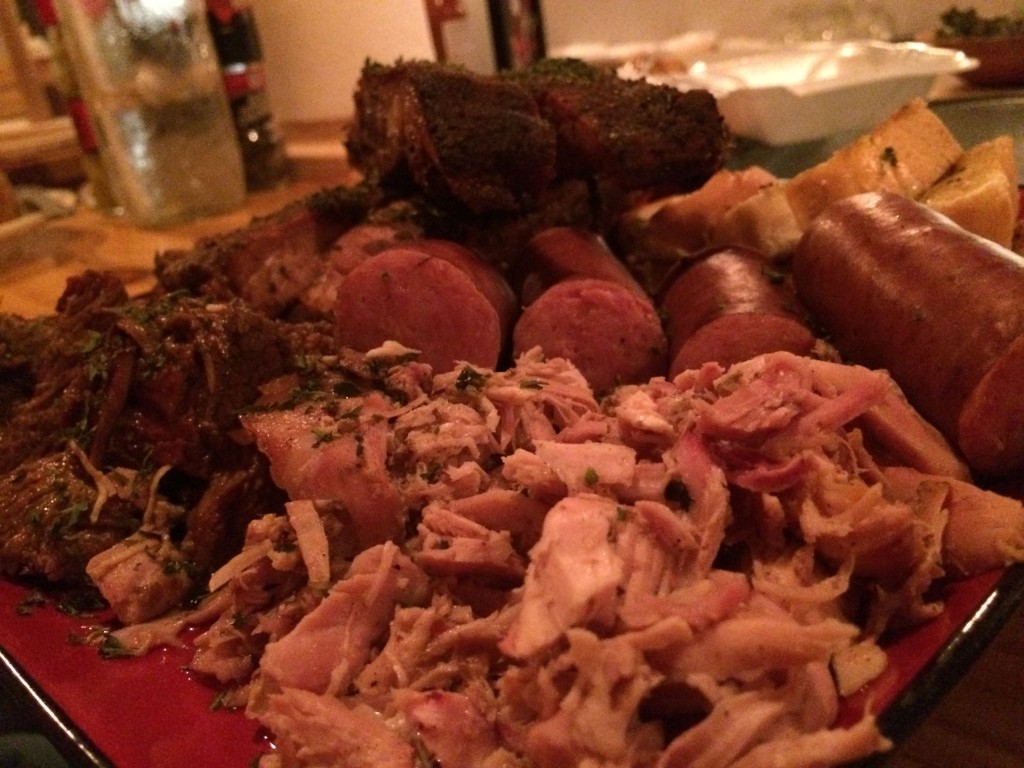 For sides we tried the Kickin’ Mac n cheese. It did have a really nice kick to it. For this mac n cheese they use cheddar, cream cheese and cottage cheeses. We enjoyed that they used a blend of cheeses you don’t normally see in Mac n cheese and the flavor was different than I’ve tasted anywhere else in town. Next we tried the collard greens. As someone who doesn’t normally like collards I really enjoyed them. They’ve found a way to almost completely rid the collards of that bitter flavor for which they’re renowned. These might be the best collards I’ve had in Jax although since I’m not a huge collards fan to begin with my sample size is limited. The last side we tried was red beans and dirty rice. These weren’t exactly traditional but they were definitely enjoyable. 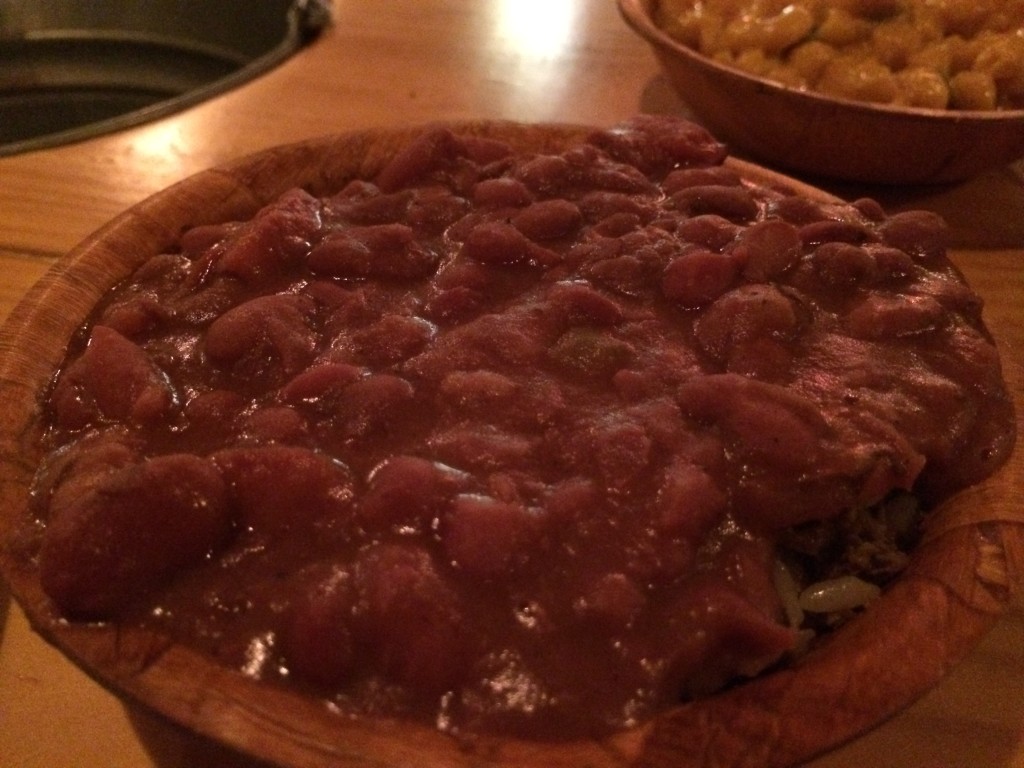 For dessert we tried the fried brownies($6). They brought us two huge fried brownies with raspberry and creme anglaise sauces(sort of like vanilla). It should be a sin to make something so bad for you taste so good! Wow! Nice crunchy batter with chocolately chewy brownie topped with the sauces was heavenly. If you can spare the calories definitely give them a try. 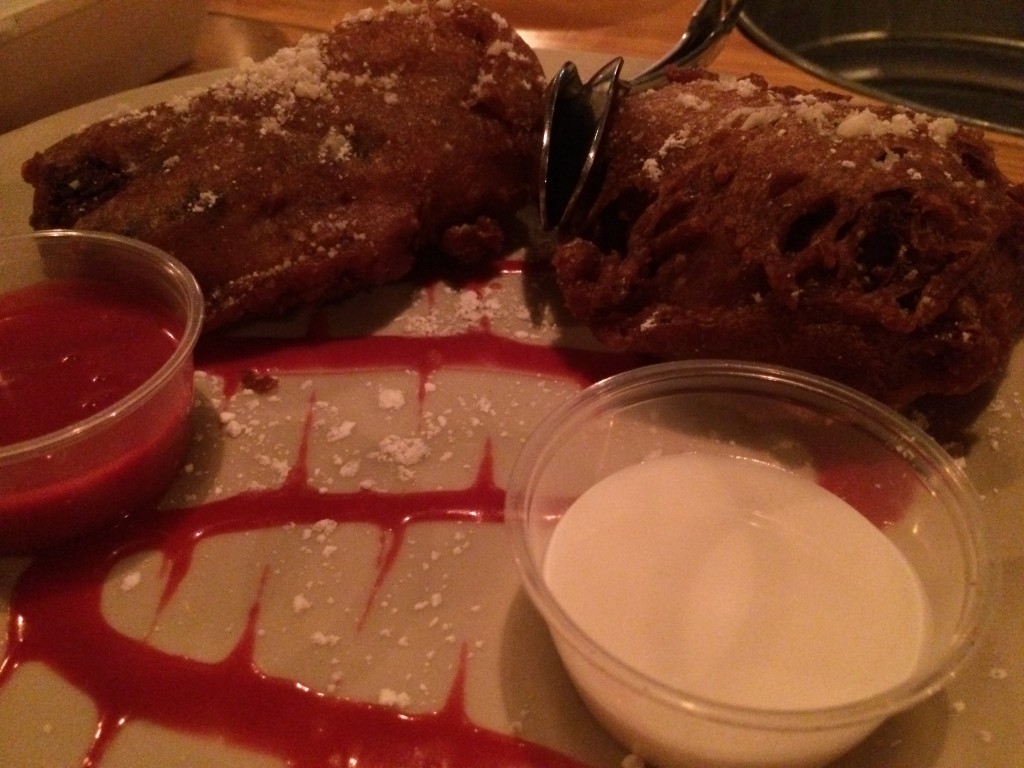 Our server at Dirty Reds was attentive and since the restaurant is really small he was always within shouting distance if we needed anything. Really our only complaint about service is that our first appetizers took a bit longer than we’d have liked to come out of the kitchen. Aside from that the folks at Dirty Reds were on top of everything as far as service goes. 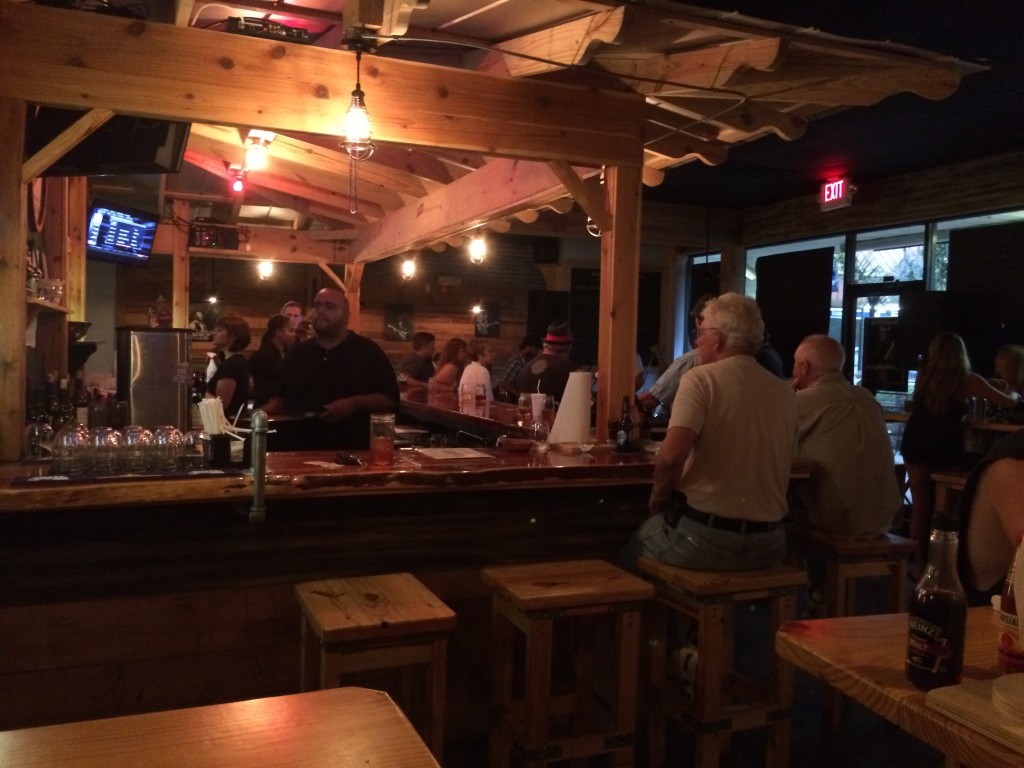 After having tried Dirty Reds food we’re coining a new food category they fit in which we’ll call “Cajun Fusion”. Cajun flavors, Southern fried goodness, and Smokey Barbecue make for a restaurant that offers flavors you’re used to combined in a way that makes them even better than you remember them. If you haven’t had Dirty Reds you need too. 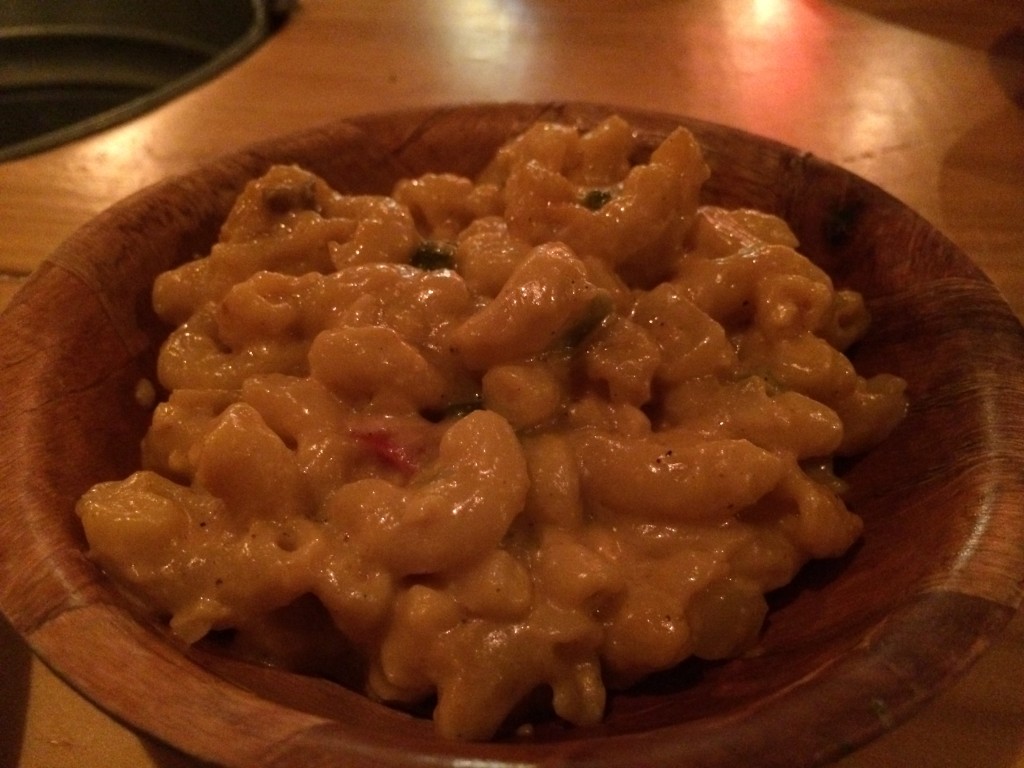 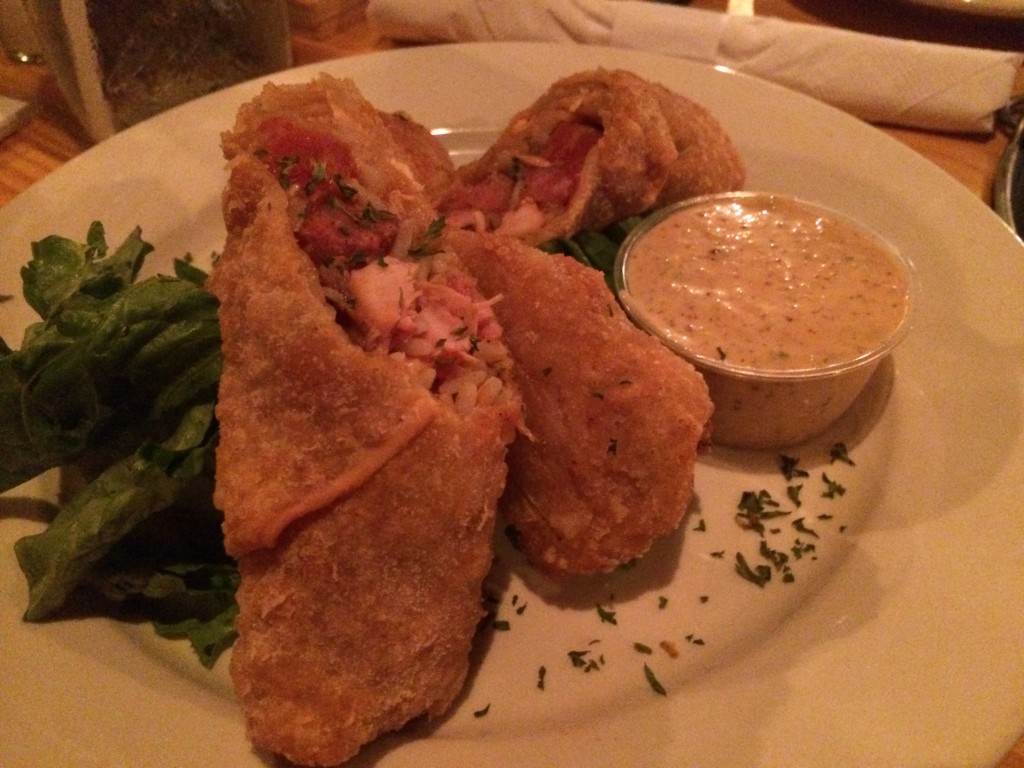 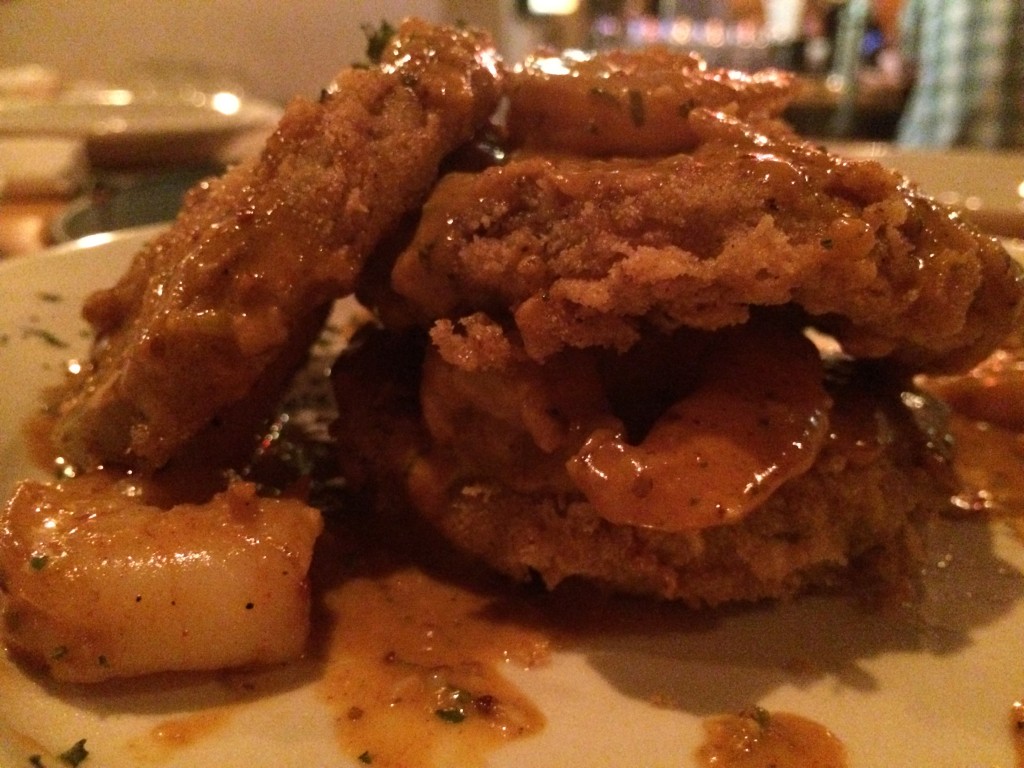 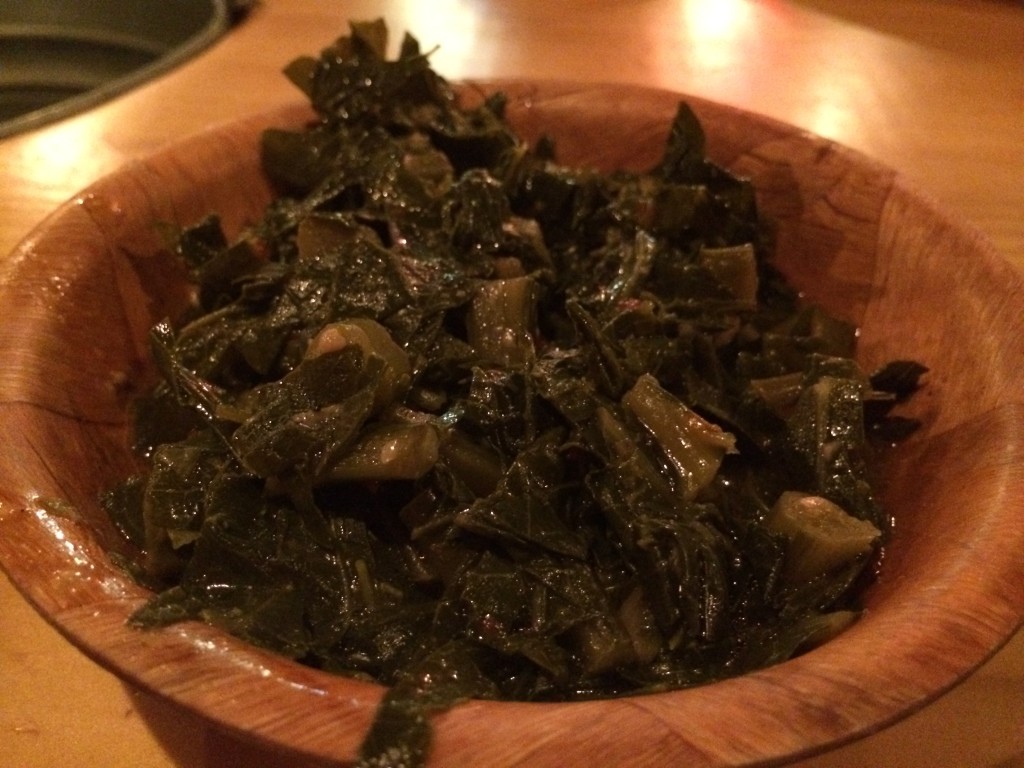