You may or may not know that some of the best sushi in town is right over the Intercoastal as you head toward the beach. And it’s not in the “traditional” setting that you might imagine when you think of sushi. Would you believe us if we told you that some of the best sushi we’ve had in a long time is being served at Nippers Beach Grille? Sushi is a relatively new addition to the menu at Nippers. But the great presentation and taste of the sushi we tried when we visited made us feel like it had been a staple on the menu for a lot longer.

Jerk-seared tuna with pickled jicama is what greeted us on this visit. It was a light, yet unbelievably flavorful first bite and an awesome start to a dialogue with Jimmy, the sushi chef at Angler’s Sushi inside Nippers. Jimmy (I’m not being disrespectful…I asked him if I should call him ‘Chef Jimmy’ or ‘Chef lastname’ in this article and he said ‘Jimmy’ was good) has brought together a list of rolls that are super creative while still maintaining top-notch quality and the integrity of more “traditional” sushi techniques. 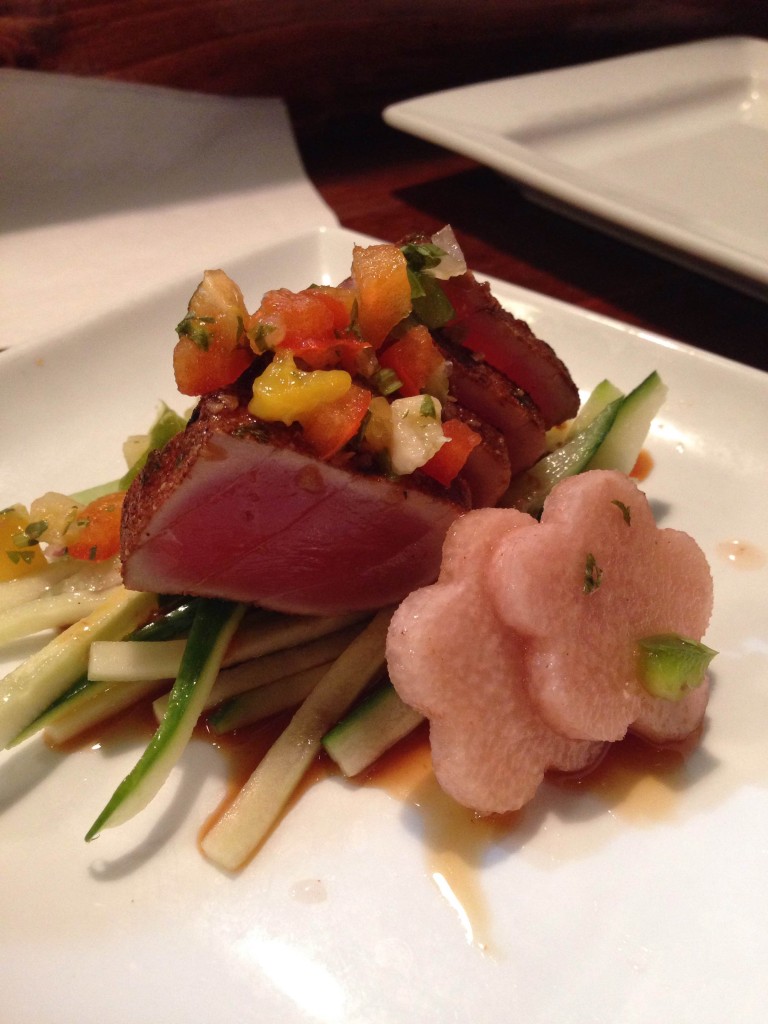 We followed up our first dish with Crudo. The fish selection at Nippers depends largely on what has been caught fresh on that particular day. On the night of our visit, Jimmy used Cobia for our crudo. It was prepared with spicy kimchi, sesame oil, and garlic ponzu. This is a nice, simple appetizer. I had not tried raw Cobia before, but I really liked the texture. Jimmy’s preparation of the fish was perfect…the super thin slices highlighted the texture and freshness of the fish. 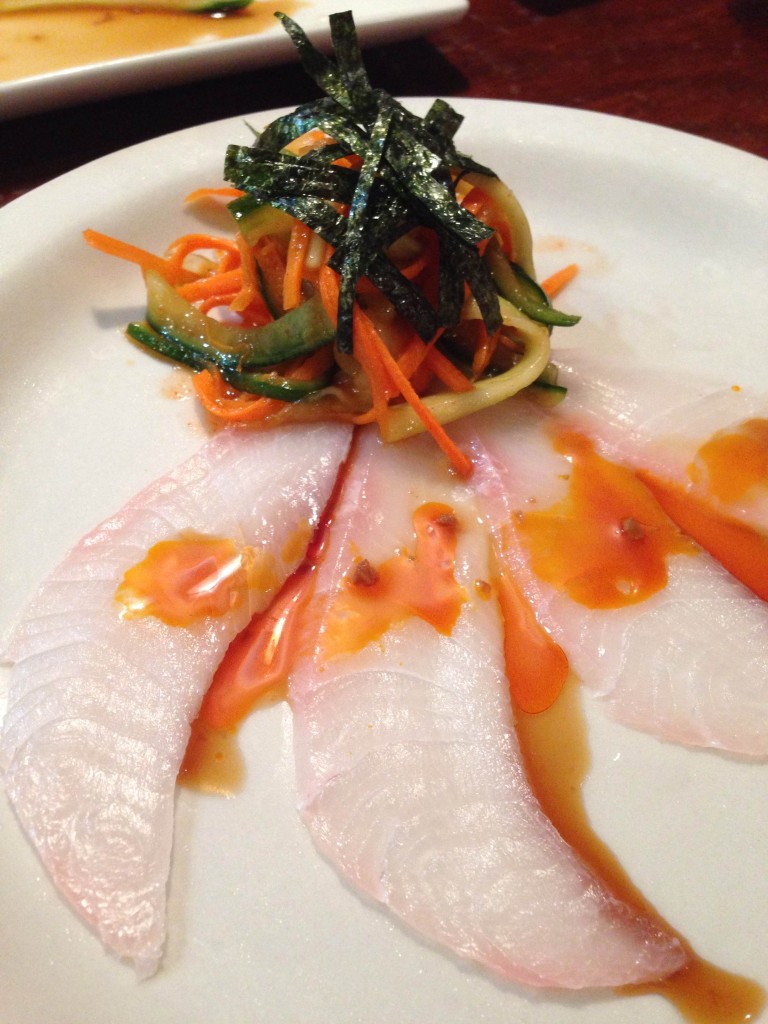 After these two simple starters, we dived right into some really interesting sushi rolls. The first actual roll we tried (accurately listed on the menu under “Large Rolls”) was the Bahama Mama. Shrimp tempura was wrapped up inside a light soy paper wrapper and layered with slices of avocado, mango, and eel. Spicy mayo and a sweet soy reduction topped the roll and offered a bright and light combination. We really liked the use of soy paper on this roll. It was much lighter and less chewy than nori and it really let the other ingredients in the roll shine rather than overpowering them. Jimmy uses soy paper in place of nori on a few of his rolls. We talked to him a little about his choice to use soy paper rather than nori (which he referred to as simply “seaweed”). I also asked him if there was a Japanese name for soy paper. He sort of shrugged and said “Probably”. At that moment I was sure of two things…first, he knew exactly what the proper term was, but it didn’t matter because his focus is on the taste, not the terminology. Secondly, it’s clear that Jimmy purposely uses basic and descriptive English words (instead of foreign terms) in order to make the entire menu less intimidating. His goal is to make sushi appetizing and accessible to everyone. Jimmy has such an easy-going and approachable demeanor behind the counter. Unlike a lot of other sushi chefs we’ve met, Jimmy makes it simple to ask questions about the sushi. He has managed to make the menu just as approachable and laid-back. 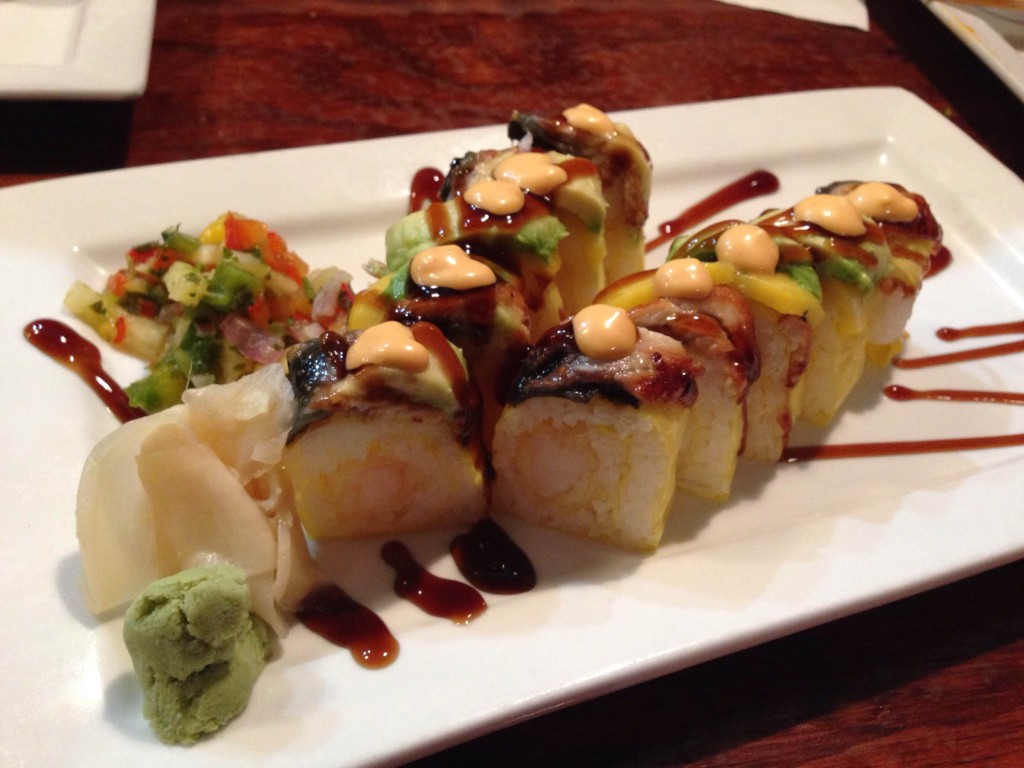 Our next roll was pretty amazing. It’s called Rudy’s Bad Idea after Rudy, the owner of Nippers. This roll has tuna, salmon, and yellowtail with sesame-chili oil marinade, all rolled up and drizzled with roasted jalapeno aioli, spicy mayo, and sriracha. All this was topped with a spicy shredded Krab salad. Jimmy prefaced this roll by telling us that it wasn’t his favorite roll…he doesn’t care for all the spice. I get that. It was very hot and spicy. I’ve got a short list of some of the spiciest things I’ve eaten in Jacksonville. This can safely be added to it. Because of the mix of spices, it hit hard. If you’re into spicy food, check this roll out.

Oddly, the next roll that we tried was called Wicked Tuna, but had much less heat than the previous roll. In my opinion, it was just the right level of heat. The Wicked Tuna had both spicy tuna and cajun seared ahi tuna, wrapped in soy paper with spicy mayo and topped with crispy noodles. Take note of one major thing on this roll…tuna twice. The cajun seared tuna and the spicy tuna were great together. This roll is an great example of Jimmy’s approach: “Modern Caribbean Sushi”. The mix of ingredients was really interesting and flavorful. The technique and presentation was traditional and beautiful. It seems like that combination is just what Jimmy is going for. Let me also note, this was just past the halfway point in our meal! 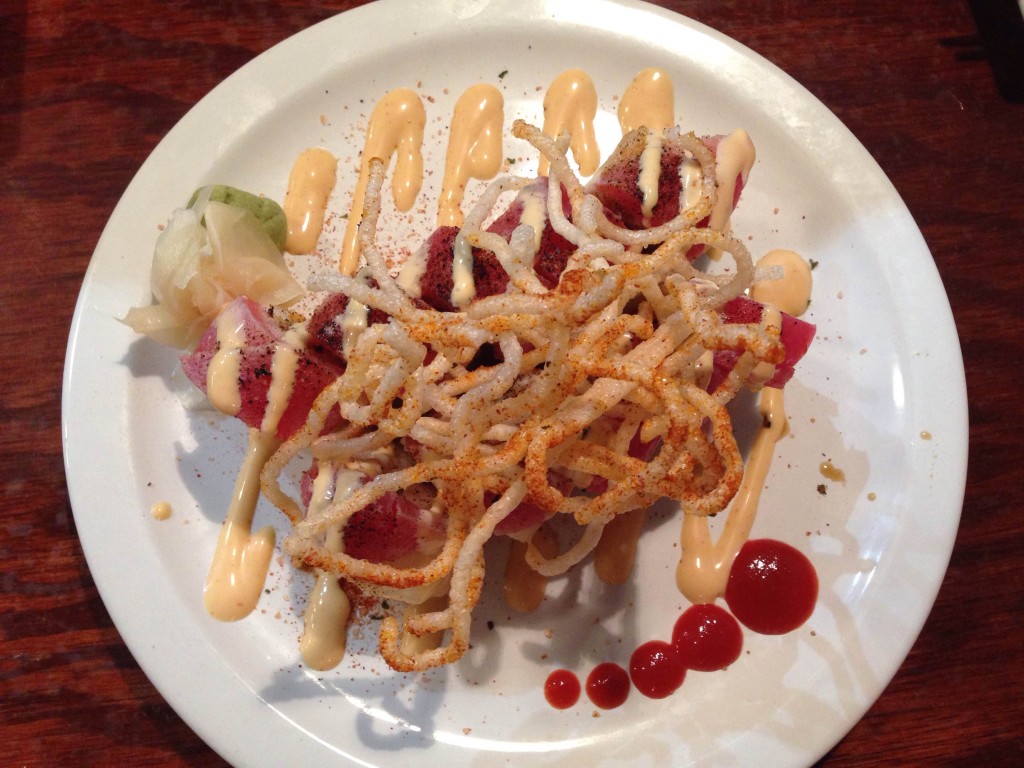 After looking over the menu, we only specifically requested one roll and then asked Jimmy to pick the rest for us. The Rasta Mon was one that we really wanted to try. And it ended up being one of the most fun sushi rolls we’ve ever had. The Rasta Mon had avocado and sweet fried plantains rolled in spinach soy paper, and drizzled in Caribbean jerk glaze. It seemed like such a strange enough combo in a sushi roll that we had to try it. This roll might be dessert for me next time I dine at Nippers. It’s not overly sweet, but I’m a pretty big fan of plantains. And combined with the slightly spicy jerk glaze, it made for a roll that we just couldn’t stop picking at. 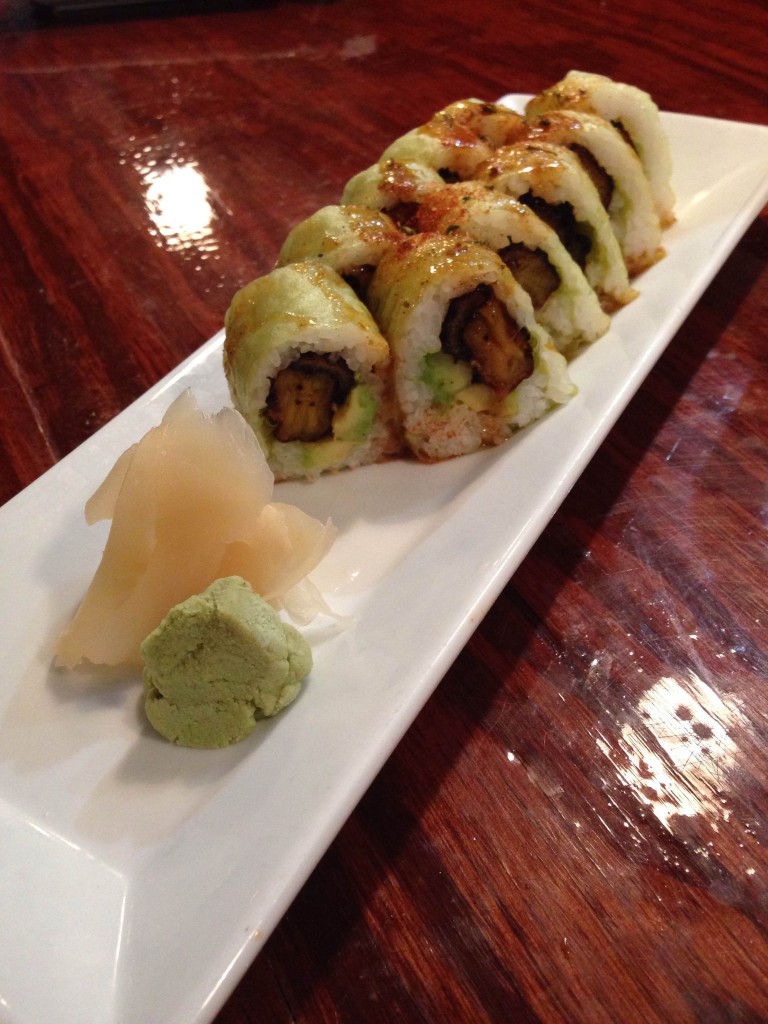 The final roll that we tried is Nippers’ most popular roll, according to Jimmy. The Jax Beach Crawler is a crispy tempura fried roll with cream cheese, shrimp sauce, sriracha, and a sweet soy reduction. It was then topped with a spicy Krab salad. I get why this is a popular roll, and I hope it ends up being a “gateway sushi roll” for more diners. It is a tasty and interesting combination of some familiar flavors and seems like it would be a great roll for someone trying sushi for the first time. Try this one on your first visit, or make it your opening roll and then trust Jimmy and try some of the other more adventurous rolls. Some may contain strange combos, some may seem impossible, but all are expertly prepared. I feel like every roll we tried had a nice attention to detail, but with enough wiggle room in the menu to allow for some fun and bold flavors. 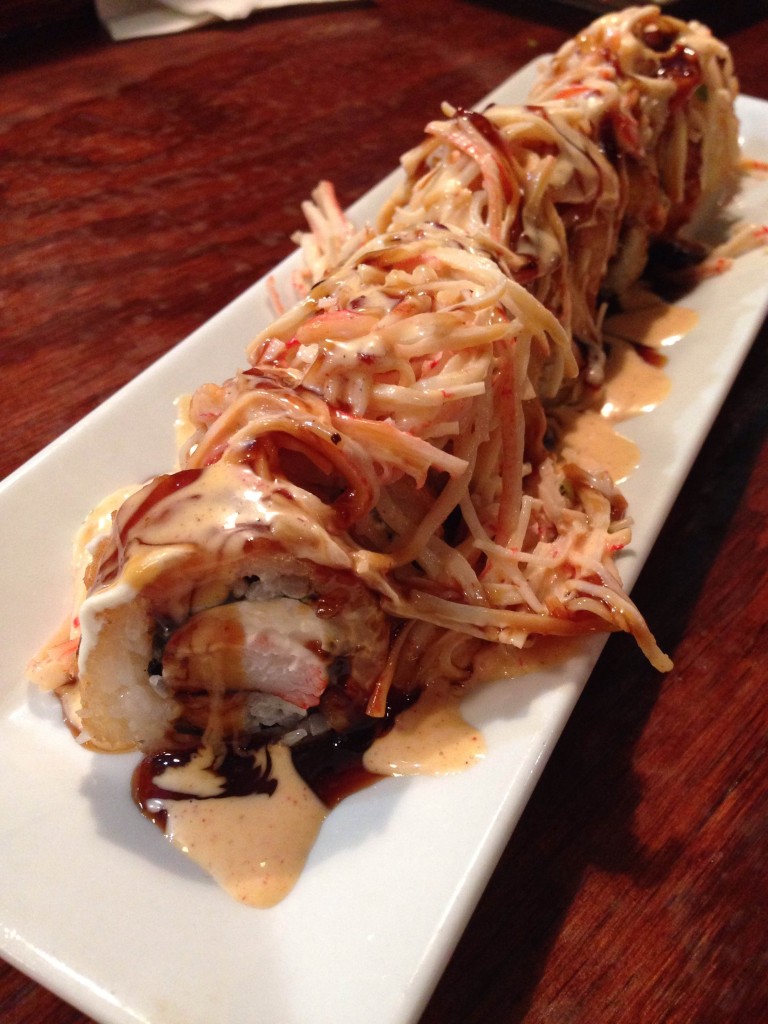 Nippers and sushi makes sense to us. They’ve got fresh fish, happy hours with half price drinks Monday through Thursday, and a sushi chef with the right attitude for a restaurant east of the Intercoastal. We tried a lot of food on this visit and none of it disappointed. While I wouldn’t recommend ordering six rolls plus dessert in one sitting, if I was going to do it again, I’m certain it would be at Nippers and I’m certain I’d just let Jimmy pick for me. 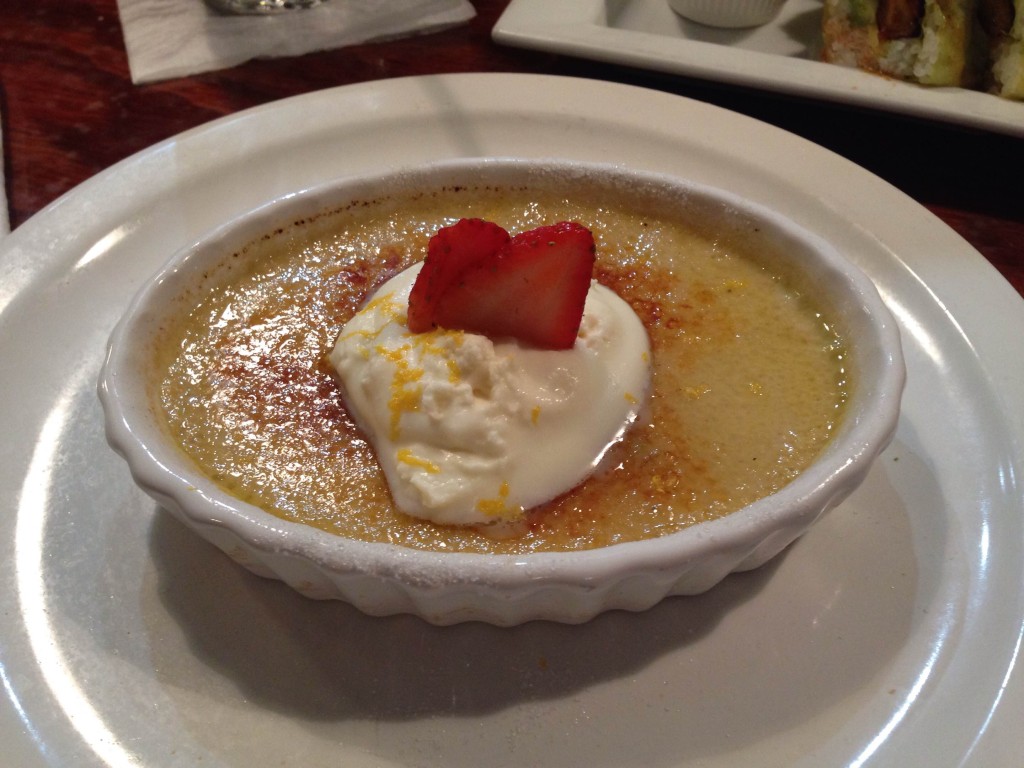 Jimmy invited us out for this dinner and this was a comped meal. However I fully intend to go see him again and let him pick what I’m eating. I won’t rehash everything we talked about, but half the experience of the rolls was Jimmy’s take on them. He’s got some really ground-breaking ideas when it comes to sushi. Here’s hoping he’s a long-time contributor to the Jax dining scene.