We’re always down to indulge in a foodie road trip, so when my friends and I all had a simultaneous day off we went on an adventure to St. Simon’s Island to visit the famed Southern Soul BBQ.  I had been several times, but both my friends posed the question, “We’re driving over an hour for bbq?”  Yes.  Yes we are.  And for good reason.  Featured on Travel Channel, Thrillist, Garden and Gun, Bon Appetit, Huffington Post, Sunday Living, The New York Times, and Diners, Drive Ins, and Dives, amongst a litany of other media sources, Southern Soul is arguably some of the best bbq in the south and possibly the entire country.  The restaurant is in an old gas station in the heart of St Simon’s Island.  It’s easy to find – simply follow the crowds of people driving towards mouthwatering slow cooked bbq smells wafting through the island air. 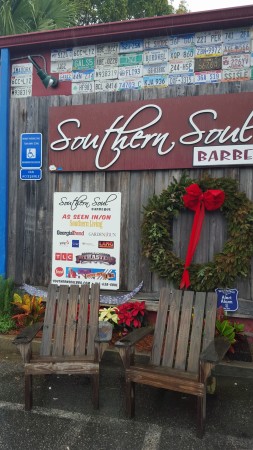 We went on New Year’s Day with the intention of having our “good luck” foods of pork, greens, and black eyed peas.  The menu is basic as most bbq restaurants prefer – there are “que” sandwiches (staples), specialty sandwiches, plates, sides, and family to-go sized quantities.  They also have daily specials that rotate often.  You order by going into the restaurant and ordering at the counter and then go claim a seat inside or outside.  There are stations with their homemade and award winning bbq sauces which can also be purchased to take home.  For today we opted for an appetizer of corn dogs ($3 each), a jumbo pulled pork sandwich ($7) with a side of black eyed peas ($2.50), a Southern Soul Sampler ($17 for two meats, Brunswick Stew, and one side), and a smoked chicken salad sandwich ($7.50).  It took awhile for the food to come out but they were absolutely packed and we knew it was worth the wait.  It was pouring rain this particular day and even though we were under the awning there was rain coming in sideways.  The employee that was walking around delivering food kindly picked up a squeegee and cleaned the water off the table and the benches for us to make us more comfortable.  It was such a sweet and unexpected gesture. 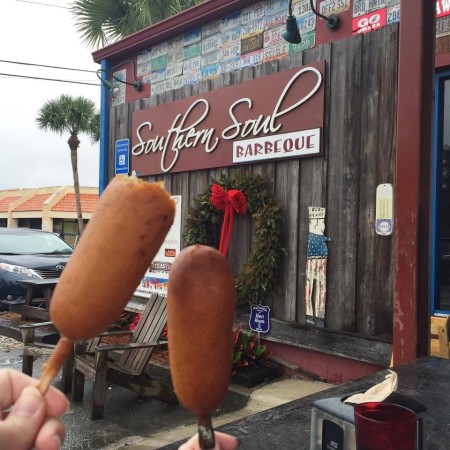 Our corn dogs arrived first and were a surprising hit.  The batter was thick and sweet and tasted just like fresh cornbread straight from the oven.  Inside was a massive beef hot dog that had the perfect pop to the casing and deep salty flavor to balance the sweet breading.  We immediately regretting only ordering one a piece; we wanted more.  For kids (or adults that think they’re kids – I’m guilty) this is a great appetizer.

The next arrival was our jumbo pulled pork sandwich and it is indeed huge.  I always like to order a basic pulled pork sandwich as part of a bbq meal.  It is a good way to figure out if a restaurant puts as much love into the simple things on their menu as the complicated items.  The pulled pork was shredded into long pieces and piled on a classic white bun with sesame seeds and served with pickles on the side.  The pork also had nice crusty end pieces throughout the sandwich to make for lots of texture.  Their pork is fork tender but not coated with a lot of seasoning so I do recommend one of their sauces otherwise the sandwich comes off dry.  Once you put the pickles and bbq sauce on and reassemble the sandwich it is about as perfect as pulled pork can be.  I also loved the side of black eyed peas.  They were mixed on top of white rice and very creamy to the point that it was nearly like a soup.  They are clearly slow cooked for hours to be as tender as they are.  There are tiny bits of pork throughout the black eyed peas that give them the salty flavor that southerners tend to prefer in their vegetables.  This is a great side for people wanting to move away from traditional bbq sides and towards a southern staple. 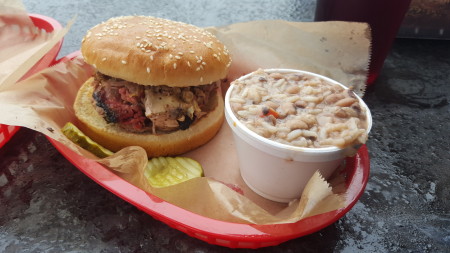 Our next entrée that arrived was the Southern Soul Sampler.  My friend opted for the smoked turkey and beef brisket as her two meats, the macaroni and cheese as her side, and Brunswick Stew.  The beef brisket was the clear winner of these two meats.  That does not mean the turkey wasn’t everything we dreamed of in turkey, it was just out performed by the tender, melty, perfectly smoked brisket.  I grew up not liking brisket because I thought it was tough.  It was simply because I hadn’t had brisket cooked right.  This was also the meat that the smoke flavor was most evident in.  It was well absorbed by the meat and left the trademark smoky flavor of bbq lingering in our mouths long afterward.  Lesson of this entire article: order the brisket.  The turkey also had a heavier smoke flavor to it and had a dry rub sprinkled across the slices of white meat for extra flavor.  The dry rub unfortunately also left a dryness in our mouths so we dipped the turkey slices into bbq sauce and the problem was solved from there.  The mac and cheese side was just like the great homemade Baptist potluck mac and cheese I grew up on.  The sharp cheddar cheese layer on top was broiled to perfection and hid the tender and creamy noodles below it.  In hindsight we needed a few extra sides of it. 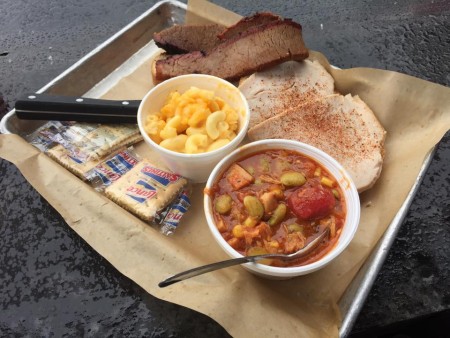 The Brunswick Stew was also an unexpected treat that I probably wouldn’t have ordered by itself but now I know to do so.  This is a Georgia staple on many menus but I haven’t had it this well prepared in a long time.  Brunswick Stew uses a thin tomato base and builds off the flavors of smoked chicken, pork, tomatoes, corn, and lima beans amongst other spices and vegetables.  This is another slow cooked item where your mouth is subjected to layer after layer of flavor.  It was particularly perfect on this rainy and chilly day but is soul warming with just a hint of smoke in the broth.  Our final entrée, the chicken salad sandwich, comes off the specialty menu at Southern Soul.  My friend who ordered it got unusually quiet after she took a bite and simply said “I just didn’t know that chicken salad could taste this good.”  It is prepared as most basic chicken salads are with mayonnaise and pickle relish and dressed with tomato and lettuce.  The key to this sandwich is the exceptionally juicy shredded chicken that simply dissolves in each bite.  We loved the presentation on toasted wheat bread too. 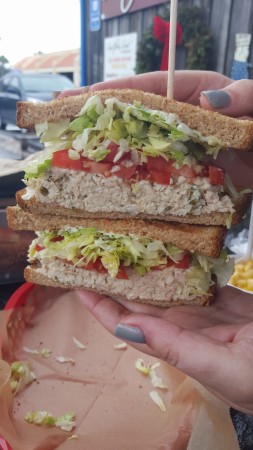 We left Southern Soul with a three meat platter ($22) for a friend and it ended up being as equally beloved as the rest of our entrées.  Southern Soul is really just beyond exceptional on so many levels.  They’re serving traditional, no frills, well prepared bbq in a relaxing atmosphere that showcases the hospitality of the deep south.  While we have no shortage of excellent bbq available in Jacksonville, it is worth the drive to Georgia to experience the bbq that is deserving of its massive wall of awards.  Keep an eye out for our local PGA golfers while you’re there – Southern Soul is a favorite amongst the Sea Island residents too!  We’re confident you’ll fall in love no matter what you order, but be prepared to re-order more to take home.  You’ll want to enjoy this excellent food for days afterwards. 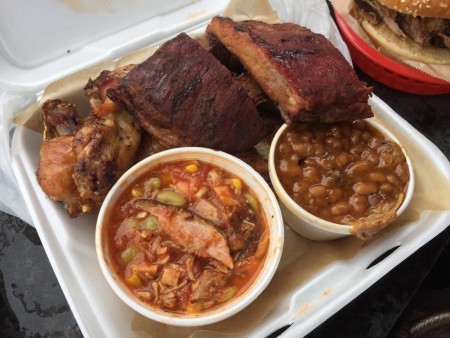