We’re always looking for people who embody the spirit of Jacksonville and who are contributing every day to growing our city culturally.  One of the women who is working tirelessly to do so is a local baker extraordinaire named Calli Marie Webb.  Calli is the face behind the extremely popular Instagram @callimariebakes as well as the mouth watering baked goods that Brew Five Points sells daily.  We were actually motivated to interview Calli after months of watching her sing praises for her home town of Jacksonville and tirelessly promote local restaurants and small businesses on her social media.  At only 23 years old, Calli has made a huge impact on the Jacksonville food scene as well as nationally and internationally across social media platforms.  Calli graciously sat down with us at Brew to tell us about herself, her passion for all things Jacksonville, and future plans for her own brand.

Calli attended culinary school in Jacksonville at The Art of Institute at only 18 years old.  Her first baking job was as an overnight baker for Panera Bread.  She was so dedicated to learning the craft of baking that she continued working these overnight shifts and attending culinary school during the day every day.  Calli remembers this as being utterly exhausting but also worthwhile as it taught her what it meant to be a high volume production baker.  The long hours working by herself there caused her to almost fail a semester in school, so she knew at that point she had to find some other way to gain experience.  Calli moved to working at the stadium for awhile with team dining and also worked at the Sulzbacher Center for a year as the kitchen manager.  At the Sulzbacher Center, she continued gaining experience in large scale preparations by serving meals to 500 homeless people three times per day.  However, even though she enjoyed those two jobs she found herself missing baking.  She began to search for a job that allowed her to bake without her having to do so overnight.  She found herself at The Sweet Shoppe inside of 4 Rivers.  After baking cakes all day there she knew that was the road she needed to travel. 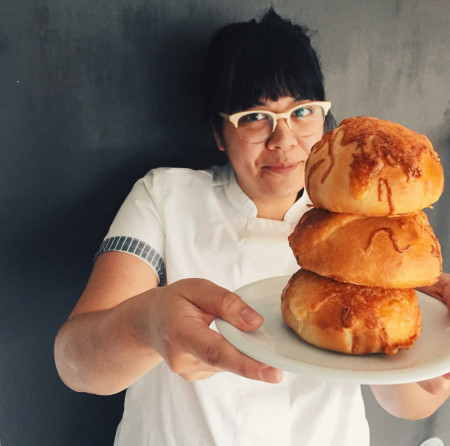 Calli graduated culinary school in 2013.  Upon graduating, she told us “My professors told me when I finished culinary school get out of here (Jacksonville).  That there was nothing for me here.  At the time, almost everything was corporate.  But, I was super young and I kept thinking, I’m not going anywhere!  So, through Instagram and hanging out in local places like Bold Bean I met local people that I could work for.”  Calli began to work at Knead Bake Shop shortly after graduating.  “There aren’t a lot of places that make croissants from scratch every day – Knead was the only place at that time.  It took knowing other people that believed in Jacksonville for me to stay and build this city.  Back then I could literally go to Black Sheep, Orsay, or Taverna for dinner and that was about it.  But then so many people started to say ‘Oh how can we make Jacksonville cooler?’ and I decided to stay and try to help.  Jacksonville has so much potential so I decided to stay and work here.”  For a while, Calli juggled working at The Sweet Shoppe, Knead, and then began to work at Brew as a barista when it opened.  As Brew began to get busier and the demand for Calli’s toast menu increased, Calli left The Sweet Shoppe and took on more hours at Brew.  After a meeting with the owner of Brew, Calli said “I was throwing the idea around of baking here.  That same night I couldn’t sleep and I was like you know what, let’s just do it.  We’ll bake here.  We’ll figure it out.  Let’s write an equipment list and get this together.  Two months after that we converted the whole back room into a kitchen.”

Calli was no stranger to tiny kitchens, as she had also worked on The Happy Grilled Cheese and Fusion food trucks during transitions between baking.  Calli really enjoyed her time in the food truck scene, particularly the ability to travel around the city and be somewhere new every day.  She also had the opportunity to travel with The Happy Grilled Cheese to Austin, Texas for research and development into their food scene.  Austin has a special place in Calli’s heart and has inspired her throughout her baking career and motivated her to expand her view of what coffee shops could be.  She later carried this vision through to Brew.  It came to a point where Calli had to make a decision between continuing to work for The Happy Grilled Cheese or transition full time into baking and developing Brew, which she said was one of the hardest decisions she’s had to make in her career.  Carrying a diverse range of culinary experience, Calli committed to Brew. 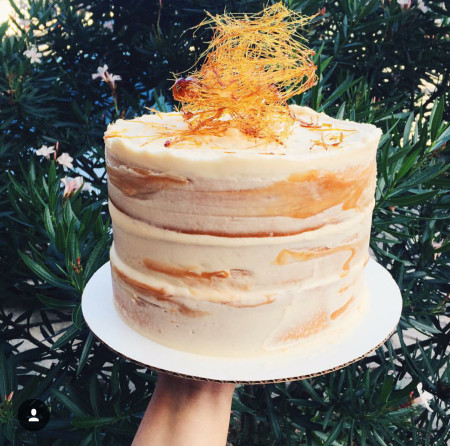 Brew, under Calli’s direction, expanded into a full brunch menu of “all kinds of weird stuff” according to Calli.  Basically, Calli takes something that you’d expect and makes it unique and different.  A great example of that is their “chicken IN waffles” which changes the classic presentation of chicken on top of a waffle into a waffle with chicken griddled into it.  The combination is topped with berry butter and Cholula syrup for a drool worthy sweet and spicy experience.  Another popular menu item is the “Basic B!#@H” with miso butter, avocado, radish, and chili oil.  Calli laughed and explained, “We have 8 types of toasts.  People are like ‘what you just make toast?’ and then we make it for them and it changes their mind.  We get our bread from 13 Gypsies and some meat from them every once in awhile too.  We’re also expanding our menu soon, which is crazy because I think I’m already busy now.  But soon we’re going to have grab and go sandwiches during the day in addition to the brunch menu.  I think the thing is in Jacksonville people don’t know that there are coffee shops with full menus.  Other cities have 50 coffee shops.  You can sit at a coffee shop in Denver and see two more coffee shops from the window.  I want to create an environment like that.  It’s such a small close knit community here, and we’re all very supportive of one another because we want the coffee scene to grow.  But, it’s an uphill battle.  When we first started serving toast I got made fun of more than you can imagine and I just wanted people to eat it and get it.  Toast is perfect with a cup of coffee.  It’s only half a sandwich, it’s all local ingredients.  I try to pair ingredients that bring out the notes of coffee.  I want to create food and beverage pairings that you don’t see everywhere else.”  Calli highly recommends adding an egg to any of the toasts served at Brew – it’s an overlooked option that she says always makes people thrilled when they try it. 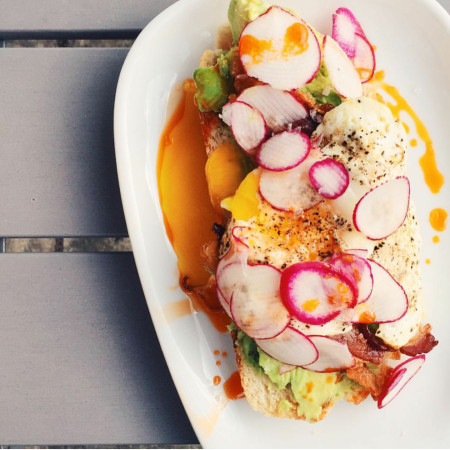 Part of Calli’s fame has been due to her excellent handle on social media and branding herself.  With over 25,000 followers, she has one of Jacksonville’s largest Instagram accounts.  Calli told us, “Instagram contacted me about a year ago and I was featured as a suggested user.  Through that I got like 1000 followers a day.  It was just from Instagram posting about me basically.  They literally have a group of people that search Instagram all day and find people.  It’s been pretty cool, they even send me gifts for Christmas every year.  I had about 2000 followers on my own and I got about 15,000 after that.  Then Food and Wine also reposted a picture of mine, I was on Food and Wine’s blog for showcasing women’s chefs in the month of February.  I really love Instagram, it’s my favorite.  I’ve even met some of my best friends.  It’s a great way to meet people.  People literally come up to me and say they’ve seen me on Instagram.  Plus, my Instagram is truly my life.  I really get to bake this cool stuff every day.  I literally get to make all these things and serve it to people.”  Calli stressed to us that she makes sure all the posts on her social media are genuine and reflect exactly what occurs in her day to day life. 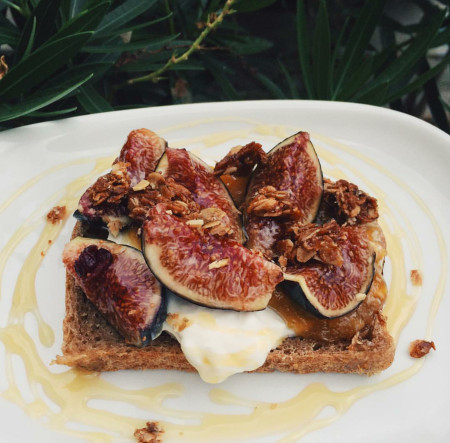 As far as what Calli expects from her future, she fully intends to stay in Jacksonville and continue to help grow our city.  She described Jacksonville to us as “being a huge little family.”  In fact, every time the thought has even crossed her mind to leave here, she realizes that she would rather stay.  Calli is intent on building her business and brand, and according to her, “Where else to do it than a place that’s completely transformed in the past few years?  There are so many neat places and it’s cool to start small businesses with your friends.  I’ve grown up with these people and learned so much from and I’d love to work beside them and make Jax cooler together.”  Calli sees Jacksonville right now as still isolated into pocket neighborhoods, but she thinks that within a few years it will be all melded together, as we’re already seeing in Brooklyn, Springfield, downtown, and Murray Hill.  Her twenty year plan?  “I just want to improve the quality of life in Jacksonville.  I will open a bakery in the future.  We want to make something that’s a flavor experience you’ve never had.  I want to take something that you’re not used to and turn it into something else.  I want to always use the best ingredients that I can and support our local community.”  She’s taking strides in the right direction, emphasizing that her cakes currently made through Brew’s catering only use the highest quality ingredients and never use food coloring.  A primary goal of hers is to have more people in Jacksonville choosing local bakeries instead of choosing corporately owned bakeries in grocery stores and overall to switch to supporting small businesses.  Calli explained, “I make kolaches every morning and if people can start to appreciate that this bread came out of the oven an hour ago instead of getting frozen bread on sandwiches at Starbucks…that would change everything.” 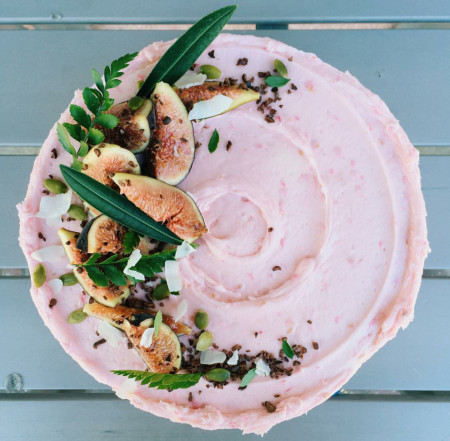 We expect Calli to take the world by storm sooner rather than later.  She is a tremendously accomplished 23 year old and the sky is the limit for her.  She radiates positivity and enthusiasm about building our community and improving the Jacksonville quality of life.  No one can knock her work drive either, she is in the midst of writing a cook book, she’s a featured chef in the Chef’s Canvas which comes out in March, and also a contributing writer for Edible Northeast Florida magazine.  We can also see her work featured in Better Homes and Gardens in December.  Calli is the definition of what makes Jacksonville amazing – she’s unique, energetic, and has the joie de vivre that will inspire Jacksonville and help our city grow.