My friend and I were on a late night Hawker’s run because noodles at 10 pm are always a good idea.  However, the line was out the door and down the sidewalk at Hawker’s so that was an immediate veto from me.  During my loop around 5 Points debating on a back up plan I saw Kaika Teppanyaki, so we decided to stop there to fulfill our Asian food cravings.  I had heard mixed reviews about Kaika since their opening but neither one of us had tried it yet.  We walked in and were seated immediately in a shi-shi swanky booth on the bar side of the restaurant.  On the other side of the restaurant were quite a few hibachi tables, many of which were still in use with the late night dinner crowd.  The restaurant was bustling but we were still greeted nearly immediately and were brought cucumber water while we looked at the menu.  I fell in love with the ambiance of the restaurant immediately.  Their designer is a genius.  Everything looks classy and upscale, the bathrooms are gorgeous and modern, and they put low hanging drop lights over each booth to make every Instagramming food blogger very, very happy. 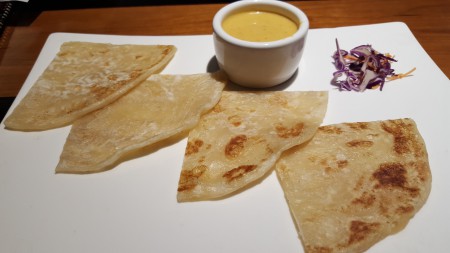 As we were on the verge of starvation, we quickly put in some appetizer orders to get us through until we could decide on entrees.  The Kitchen Starters menu is fairly typical for Asian fusion restaurants and includes a mix of tapas, sushi, soup, and salad.  We went with the Malaysian Roti ($3.95) and the Krab Rangoons ($5.95).  Yes, purists, it’s krab.  I don’t have a problem with krab when it’s fried and mixed with cream cheese because really you’re getting the same taste and texture with fried food.  Now I won’t order a krab salad, etc, where it’s the dominant flavor.  The only crab on the menu is softshell crab sushi, everywhere else it’s krab.  BUT, they do have lobster if fresh seafood is your craving.  The roti was delicious.  We got four big triangles of buttery charred roti and a small dipping container of the Kaika Special Curry sauce.  It’s a light yellow curry that is mildly spicy but acceptable for most palates on the heat level.  We loved this and probably could have had two orders.  The rangoons were molten and stuffed with cream cheese, krab, onion, carrots, and celery.  The filling was delicious and I loved the unusual addition of the carrot and celery for texture, but the wonton wrappers were a bit thick for my preference.  It was more a pie crust texture and I prefer more of a phyllo texture.  This is purely a matter of preference though, and we definitely ate them regardless. 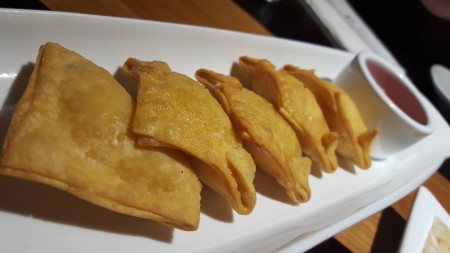 For entrees, we opted for Chicken Pad Thai ($10.95), a Kaika Dynamite Roll ($7.95), and two pieces of BBQ Eel ($4.75).  Chicken pad thai is a weakness for my friend, she’ll order it just about anywhere we go and she gauges whether it has enough peanut sauce on it by the smell. (Apparently it needs to smell like a wet dog for there to be sufficient peanut sauce.  It’s a weird measurement but it works for her).  This was standard pad thai.  It had rice noodles tossed with egg, scallions, bean sprouts, crushed peanuts, lime, and basil.  She was in heaven.  The chicken was tender and plentiful, the noodles were perfectly stir fried, and the flavors were all evident throughout.  It was also beautifully plated; their chef takes time to make sure the meals look gorgeous prior to delivery to the table.  It was an average sized portion which matched the price.  Other restaurants charge a few dollars more per entree and you have some leftovers.  This was a one meal portion and that is perfectly fine for what we paid. 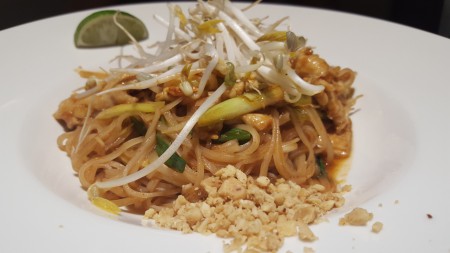 The Kaika Dynamite roll was incredible.  I chose it because the sauces put on top interested me.  The roll itself is fried (which I normally steer away from but this turned out well) and stuffed with salmon, krab, shrimp, avocado, and topped with a eel sauce and sriracha combo.  I’m sure Dynamite refers to the spiciness, but the flavor falls under the same description.  The roll is only lightly fried so it doesn’t feel heavy.  The flavor is primarily the sweet salmon paired with avocado then with the light krab flavor afterwards.  It’s set off with the spicy sriracha which is toned down slightly by the eel sauce.  I loved this roll and would drive across town to get this one.  It’s unique and flavorful and even though I originally thought it wouldn’t fill me up, it’s more sushi than you think.  Disclaimer – bbq eel is my favorite thing to order at sushi restaurants.  I’ll eat it in any manner it’s presented most of the time.  This eel was cut a little too thin for my taste.  The closest thing I can compare it to is bream fish.  It’s so thin it barely holds together and definitely fell apart while I was using my chopsticks.  I didn’t feel like it was worth the price for the cut of fish on this one.  $4.95 is a little pricey for the two pieces being paper thin.  The flavor is there though; if you like barbecued eel you’ll like the flavor for sure. 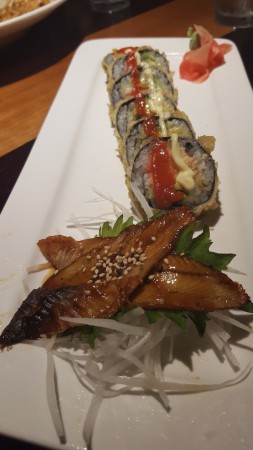 While we were full, we were both craving something sweet so we went with two of the mochi flavors of the day.  We both chose red bean and green tea for the sake of authenticity.  These were jumbo sized mochi and two apiece did the trick.  The green tea mochi was sliced and topped with whipped cream and strawberry sauce.  The red bean mochi was sliced, topped with whipped cream, and drizzled with kiwi lime sauce which tastes just like green apple.  We found the green tea mochi to be a little grainy on the texture.  My friend theorized it may be the quality of the matcha used.  The red bean mochi melted as we ate it and we loved the tart sauce combined with the sweet red bean.

Overall, our experience at Kaika was excellent.  The service was attentive and professional, the drinks we ordered were poured heavily and were a great value, and the food flavor was pretty perfect across the board.  With the expansive menu they offer there is something for everyone at Kaika.  For those working near 5 Points, they also offer Bento Box lunches for $9.95, Hibachi lunches starting at $8.25, and sushi bar lunch specials starting at $11.95.  It’s pretty hard to beat such an upscale, chic atmosphere for the prices that Kaika is offering.  It worked in our favor that we accidentally stumbled upon Kaika, it will definitely be on our list for a return visit. 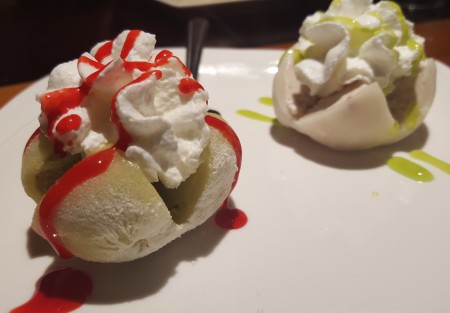