Today we get to share with you the oldest established restaurant in Jacksonville. Open since 1939, Beach Road Chicken Dinners may just be the ultimate locals spot. You may wonder why a restaurant on Atlantic Boulevard would be called Beach Road Chicken Dinners. When the restaurant opened Atlantic Boulevard was actually the only road to the beach. Hard to imagine Atlantic being the only road to the beach nowadays! 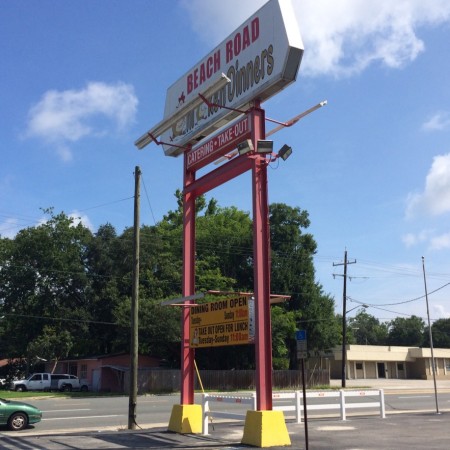 Beach Road Chicken Dinners offers most fried foods you might want at a southern restaurant(chicken, fish, liver, shrimp etc…) but everyone really just orders the half fried chicken dinner. That’s what you should do too. Beach Road has won a laundry list of awards over the years from Best Fried Chicken in Jax by Jacksonville Magazine to Best Fried Chicken in the South from Southern Living Magazine.

I grew up going to Beach Road Chicken Dinners and in its heyday it truly was the best fried chicken in Jax and likely the best fried chicken in the south. I may be biased but I’ve always felt it was the best fried chicken I’d ever had. Growing up there was a line out the door at dinner time. I’ve always loved the place! I’ve gone to Beach Road Dinners intending to write about the food 3 times over the past two years since we started Jax Restaurant Reviews and every time I had mediocre to bad experiences. I couldn’t bring myself to write about it. Now on trip 4 I feel obligated to tell it like it is…..Beach Road Chicken Dinners isn’t what it used to be. It hurts me to say that! It’s the truth though. It’s clear they’ve changed many of their recipes or the cooks simply don’t know how to make them. It’s sad and unfortunate and it may lead to their demise. I genuinely hope they realize they need to go back to what worked. 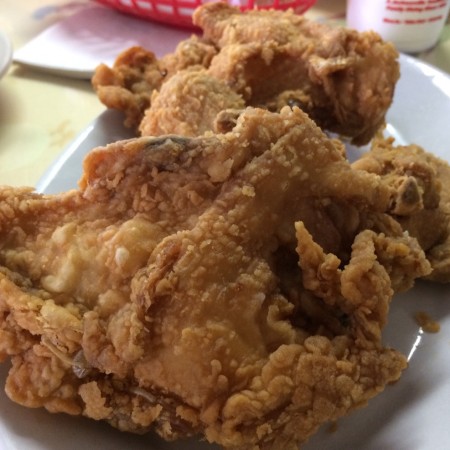 When you order a half fried chicken($9.98) it comes with cole slaw to get started on while your food is being cooked and your choice of family style sides which include creamed peas, rice and gravy, biscuits and honey, mashed potatoes and French fries. The bowls are passed around family style as if you were having dinner at grandma’s house. Most folks have sweet tea with dinner and their sweet tea like all great southern sweet teas is so sweet it’ll make your eyes water. If that’s not your style then ask for half sweet, half unsweet tea commonly called “tea half and half”. On our visits over the past two years the fried chicken has been pretty bland. If you’d never been to Beach Road Chicken Dinners in its heyday you’d probably call it average fried chicken and it’d be fine but not something you’d drive across town to get. If you’ve been there you know that was the kind of fried chicken that you might drive across the country to get.

On this visit we got seated right when the restaurant opened at 11am and after ordering our half fried chicken dinners we were brought drinks and cole slaw. We both took one bite and realized this cole slaw wasn’t edible. It was the consistency of chunky paste. Nasty! Maybe if they added a little water it might have been decent. We couldn’t eat it. The fried chicken and sides all arrived and we proceeded to dig in. The fried chicken was pretty bland. It was average. If you came in with no expecations you’d say it was just okay. The cream peas were great. They always have been. The mashed potatoes and the gravy were both bland as well. The biscuits and honey were fairly good but nothing to write home about. The French fries were the crinkle cut style and fairly decent. 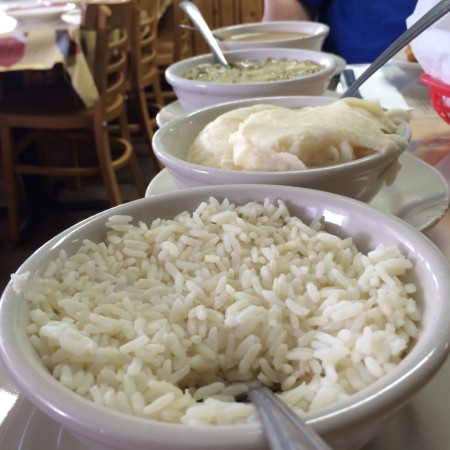 The service was fine for the price point. Our server check in on us regularly and seemed to care about taking care of us. It was nothing to write home about though.  Overall for $9.98 the half fried chicken dinner is just okay. Would I pick KFC over Beach Road Chicken Dinners? It pains me to say it but I think I would.  Spend less at KFC and get better fried chicken.