x
It is difficult to find a nice restaurant that is capable of being kid-friendly.  I expect a kid-friendly restaurant to have grandmotherly waitresses, tile floors, plastic lid-cups, and a boring menu.  On a Friday evening that didn’t seem very exciting, so we threw caution to the wind and opted to visit Aroy Thai Fusion. This particular review will have a distinctly childish tilt as we were quite the crew tonight.  My wife and myself with our two children plus my sister-in-law and her daughter arrived about 30 minutes after Aroy Thai Fusion opened.  For the record that’s three adults, a three year old, and two one year olds.  If you read our previous review of Thai Orchid you know we had to stay pretty safe since they didn’t have a kids menu.  Aroy Thai Fusion offers a cool kids menu so the adults were free to try whatever caught our eye.
When we arrived two hostesses walked us to a booth, but when we pointed out we’d need two high-chairs they quickly found a 4-top table that would handle a high-chair at each end.  They were quick to get us all seated and happy.  Our waiter wasted no time in getting our drink orders.  I was a bit concerned because he looked young, I’m assuming with no children of his own.  However, as I’ll cover below in service he may win the award for most kid-firendly waiter we’ve had. 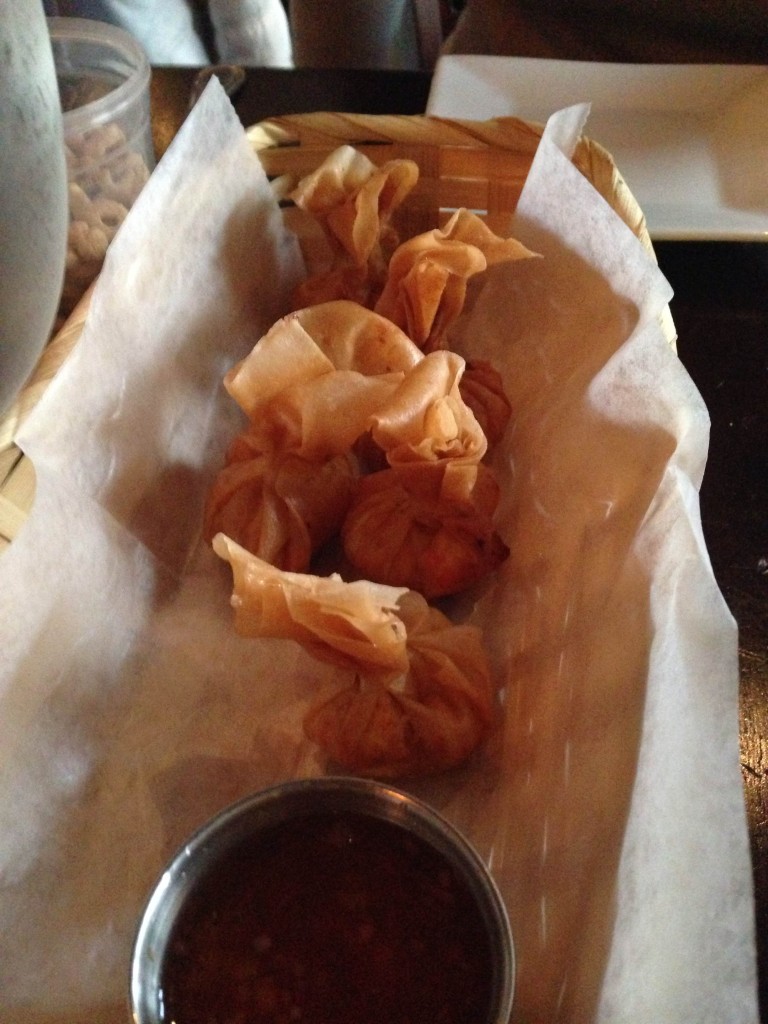 Food: Our waiter gave the typical appetizer pitch that most of us tune out.  He suggested the Fresh Golden Money Bags ($7.95) because they were being made fresh in the kitchen at the time.  The description on the menu made these appear to be Crab Rangoon, however the similarities lie only in the description.  I’m glad we ordered these, they were creamy but with plenty of crab and onion.  The onion didn’t overpower the flavor at all and the overall seasoning was top-notch. I’m not sure what some of the flavors were but these tasted like a dumpling I’ve had several times in China. 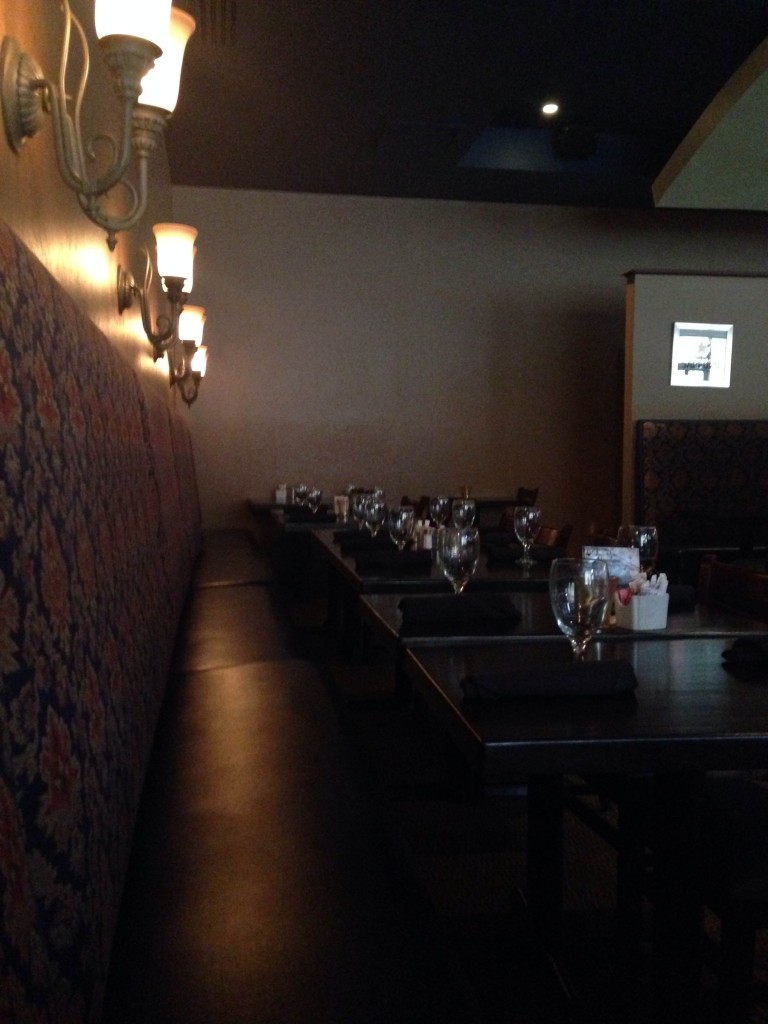 My son ordered chicken nuggets ($5.95) and the waiter offered to bring them out when they were ready instead of forcing him to wait for all our food.  What an observant offer! My son wasn’t being jumpy, but it’s fair to assume a three year old will have a shorter patience threshold than the rest of the diners.  It’s a bit silly to review chicken nuggets at a Thai restaurant, but they were a step above the out-of-the-bag-into-the-fryer stuff that typically comes from a kids menu.  The rest of the kids menu is pretty cool.  Aroy Thai Fusion offers a kids Pad Thai, Fried Rice and Sweet and Sour Chicken.  I’m not sure many kids are ordering Pad Thai, but I was really happy to see that they created a kids menu and it wasn’t just corn-dogs and french fries. 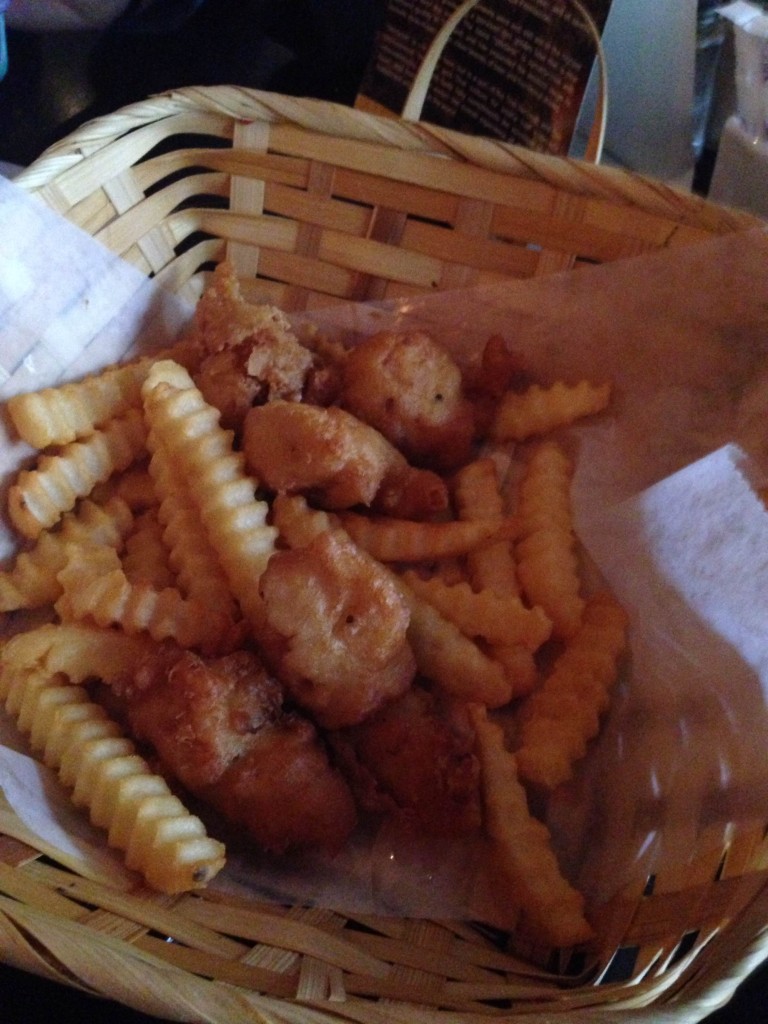 One of the problems I always have at Thai restaurants is the spice level seems to be made up.  I have an ongoing joke with a friend about Basil Thai having one chef with fat fingers and one with skinny fingers.  You have to ask which one is working before you pick your spice level because a “pinch” can vary greatly.  Aroy Thai Fusion suffers from the same problem.  While we were ordering we asked the waiter how spicy a medium is and he said it depends on the day.  If you are very spice sensitive you probably know better than to eat Thai in Jacksonville.
I ordered Pork Panang Curry ($13.95) at a medium spice level.  As far as curries go, I find Panang to be pretty accessible.  I’ve never had a terrible Panang curry and it’s been years since I had an amazing Panang curry.  This suffered from the Thai spice confusion.  It was spicier than a medium. Otherwise, I had no complaints.  I do wish Aroy Thai Fusion offered a Massaman Curry. 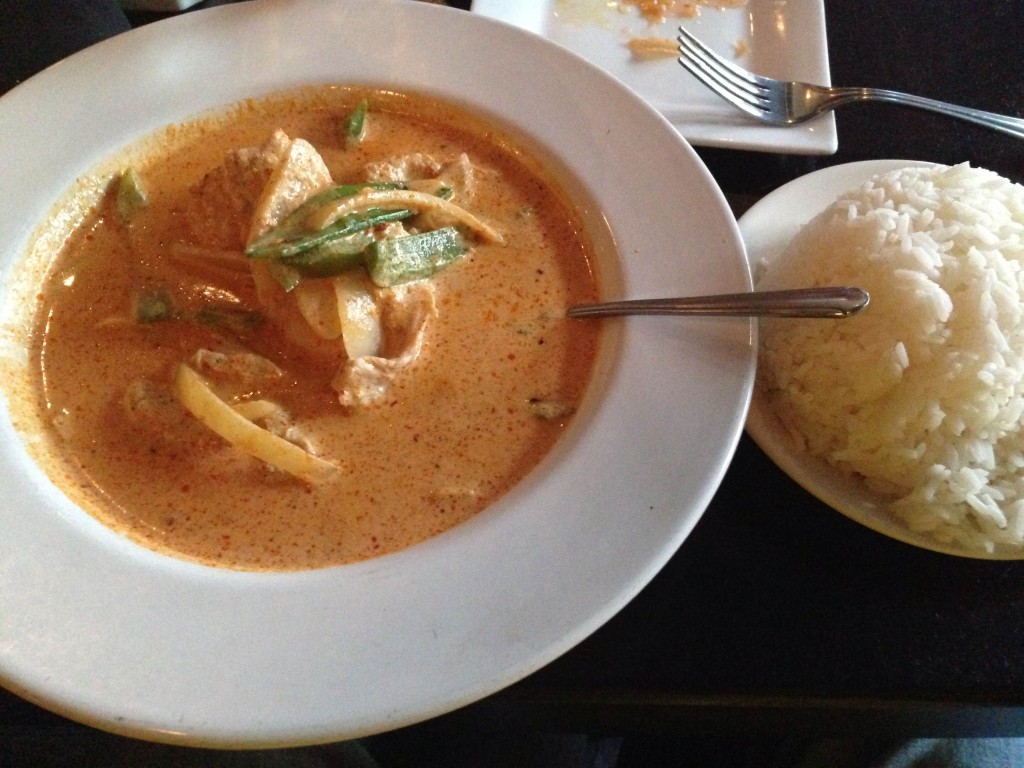 Fortunately my wife ordered Chicken Pad Thai ($13.95).  When you think of a Thai restaurant, their Pad Thai is usually the measuring stick. I only tried a few bites, but it was satisfying.  The agreed on commentary was that we wished it was a little less Limey and a little more peanutty. 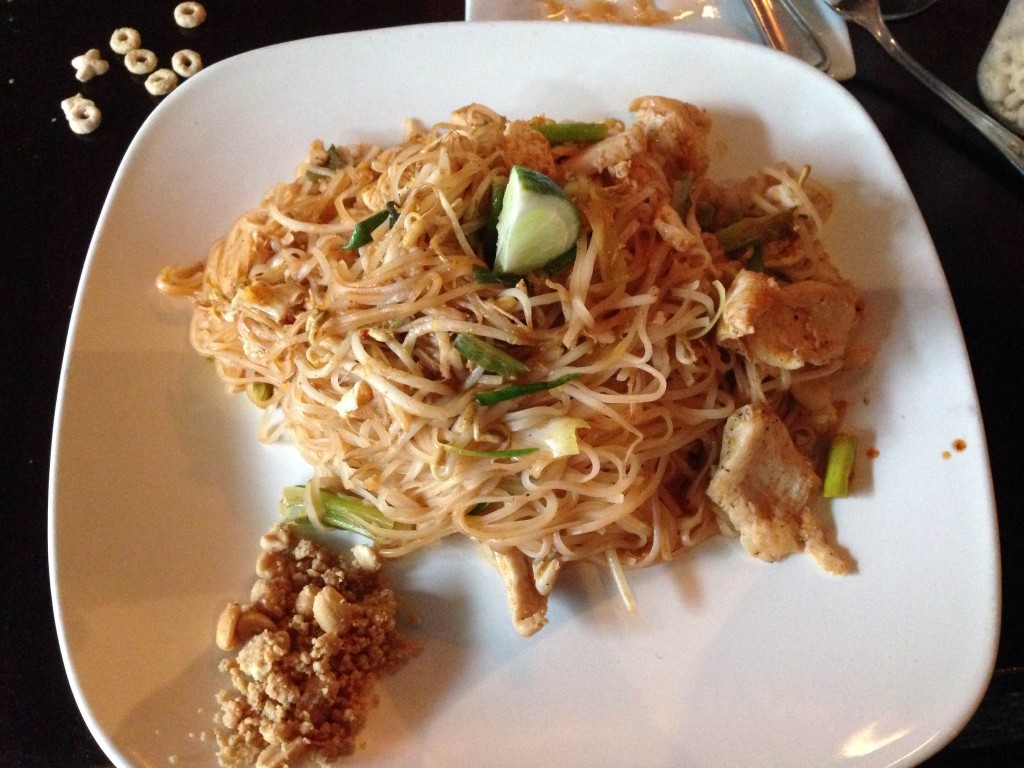 Finally, we ordered Chicken Hong Kong Crispy Noodle ($13.95).  These offered a cool texture with some bite to the noodles, lots of garlic flavoring but in this case spice level medium was insufficient. After pouring the leftover sauce from the Golden Money Bags on top, the spice level came up and helped the overall flavor. 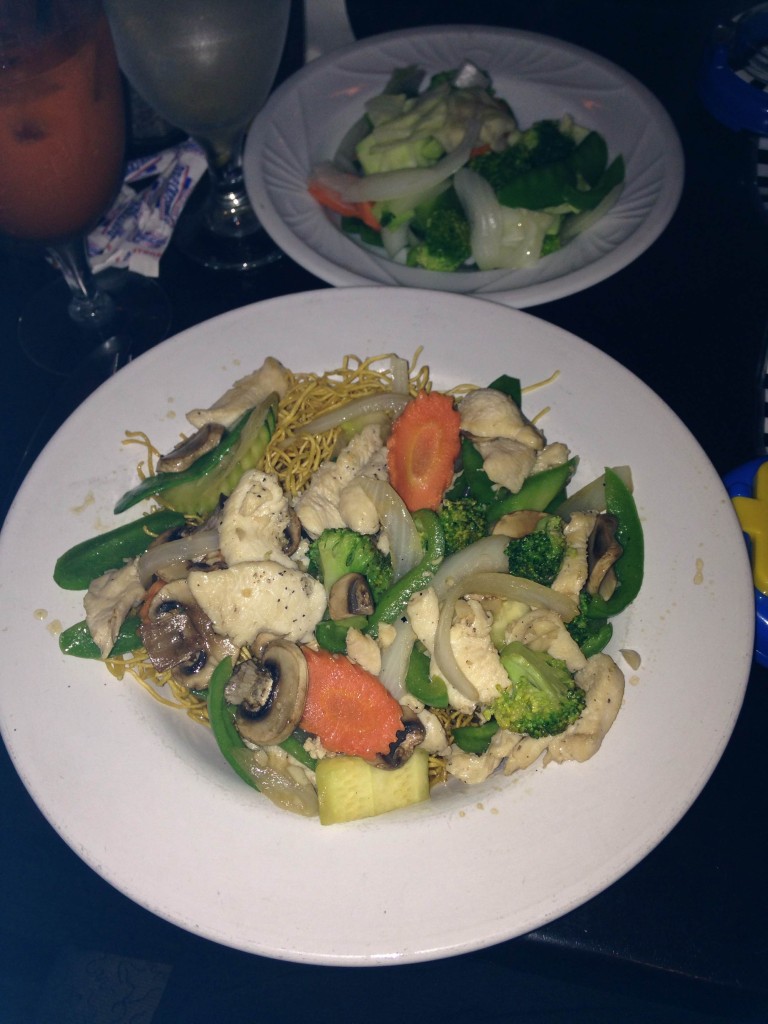 We also ordered steamed veggies ($2.95) for the babies.  We asked the waiter to make sure they were “extra steamed”.  It was nice of the restaurant to oblige on such an inexpensive side-item. 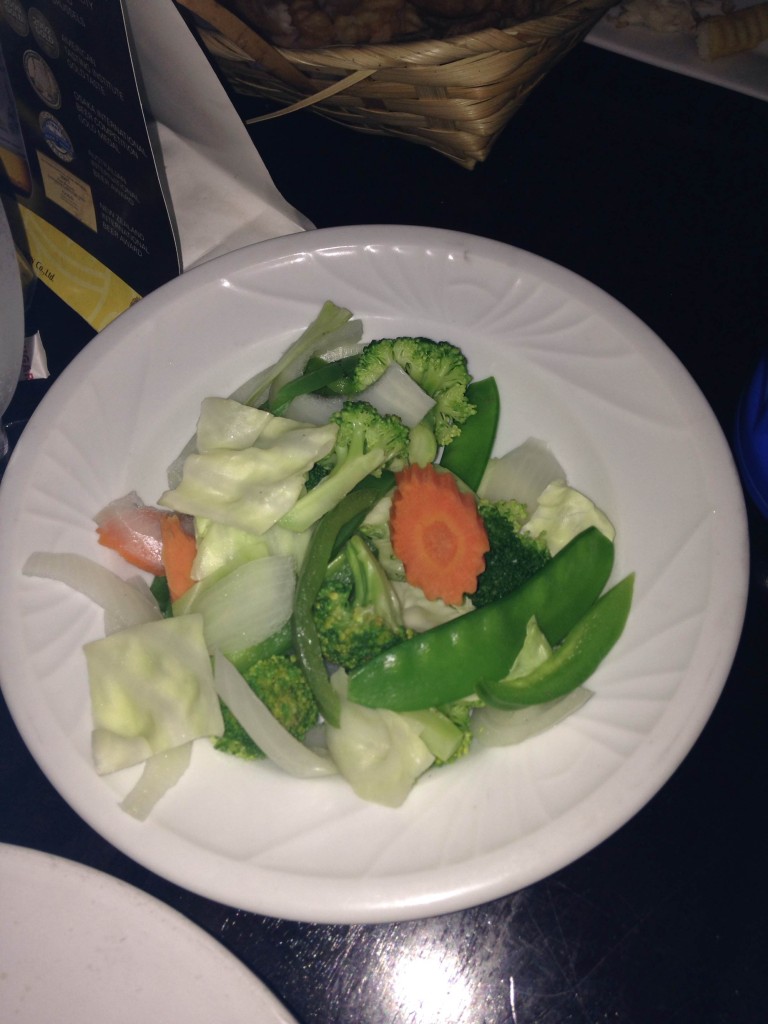 Service: Look, we have a link to Urban Spoon below that shows a lot of reviews pointing out various levels of unacceptable service.  Our experience was the polar opposite.  It should go without saying that the restaurant had no idea we were there reviewing.  In addition to offering to bring out the kids food first, our waiter was cognizant of where to put plates on the table so the babies wouldn’t grab hold of hot food or fling dishes to the floor.  My son wanted milk to drink which was a problem for us at Thai Orchid, but Aroy Thai Fusion did have milk available.  I say did, because apparently my son kicked their milk keg.  Looking to make up for it quickly, our waiter offered him orange juice, or apple juice instead.  Any self-respecting three year old knows that apple juice is the only answer in that situation.  About a minute later our waiter was walking towards our table empty-handed and told us they were also out of Apple Juice.  I honestly felt bad for the guy because he appeared to be more frustrated than I was about their beverage situation.  My son was cool with OJ so it wasn’t a big deal at all.  One of the reasons I was so easy-going about the drink situation was that our waiter brought out extra small plates for our three year old and side-dish plates for the babies to pick their food out of.  He anticipated the quirks of dining with young children and took care of anything we needed.  With kids it’s important to leave when you’re done eating.  The bill was quick to come when requested along with a box to bring home leftovers.  So, I don’t know if the service was a result of a change in focus or staff turnover, but fortunately my service experience was positive. 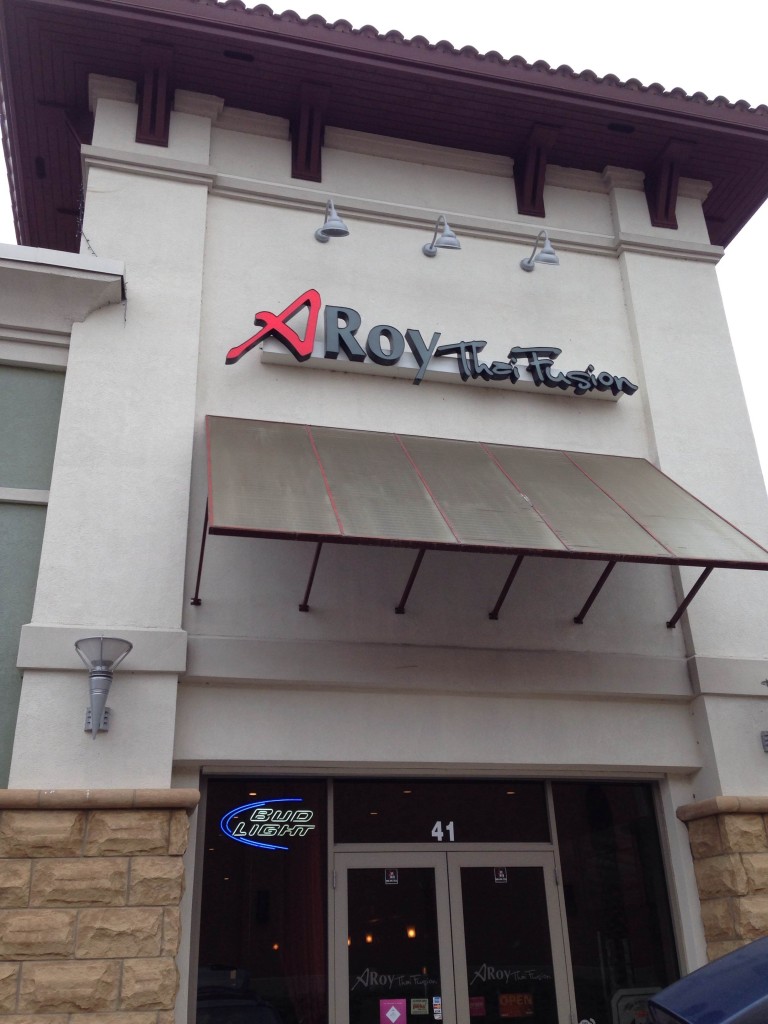 I hesitate to summarize Aroy Thai Fusion as a kid-friendly, nice restaurant because I don’t want to chase away any business they might get from people looking for a kid-free dinner.  Aroy Thai Fusion is surprisingly kid friendly, but please go before the crowds.  Believe me, I understand the value of eating out in an adults-only setting and my wife and I try to do that as often as we eat with the kids.  This particular meal was fairly early, shortly after they opened in fact. I’m adding it to my list of places to revisit so I can give a proper review of the bar, wine and and beer menu.