River City Brewing Company has become a bit of an institution in Jacksonville and is a popular choice for tourists and locals alike, with it’s gorgeous views of the St, John’s River and downtown Jacksonville.  With marina access, it is especially useful for people boating to downtown events throughout the year.  River City Brewing Company also obviously has a speciality selection of 5 beers local to them as well as an expansive seafood menu, some Asian-influenced items, and mixed Cajun items as well.  We hadn’t been to River City Brewing Company in a long time so we decided to revisit our former impression, which was that at the end of the day, you’re mostly paying for the view and not necessarily the food.

Upon our arrival we were seated in a fairly empty restaurant and were lucky enough to get a window seat looking out onto one of our beautiful Florida winter sunsets.  The outdoor patio was pretty full but there were few tables occupied inside.  Our server promptly introduced himself and offered to take our appetizer orders because he said it would be busy soon and that the kitchen could get backed up.  Our server was amazing throughout the evening, but we found this such a strange comment with the restaurant being empty.  Our only guess is that they may have a smaller, older kitchen and once the dinner crowd comes in they may just run out of room to prep and cook.  We ordered an appetizer of the key lime calamari ($11.95) which is billed as a house speciality, with fire roasted red peppers and banana peppers in a key lime butter sauce and topped with asiago cheese. 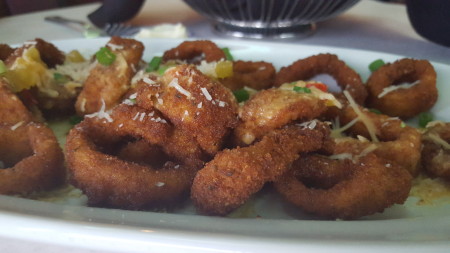 We also ordered two cups of gumbo, another specialty, for $5.50 per cup.  Our gumbo came out nearly immediately and was a nice thick medium roux with chicken, sausage, and okra over rice.  We were both unexpectedly impressed by this gumbo.  It is traditional and tastes just like authentic creole cooking.  It did however need a little heat – I suggest asking for the hot sauce to add to it unless you like a very mild gumbo.  I appreciated how much okra was in the gumbo – it is a great thickening agent and gives lots of added flavor.  Our calamari came out midway through the gumbo course and was a massive platter, easily enough for 3-4 people to share.  This is a great value item for families.  We had a few issues with the calamari.  First off, some pieces were perfectly tender, others were a tad rubbery.  Not rubbery in the “I can bounce this off the wall” type situation, but just slightly overcooked.  Also, we sadly could not taste the key lime element in the calamari.  This to us was a selling point of a traditional Florida flavor used in an unexpected way.  But it just wasn’t there.  The breading was crisp and flavorful with the asiago cheese adding just a bit of bite, but we wanted that tropical flavor to balance the mild calamari. 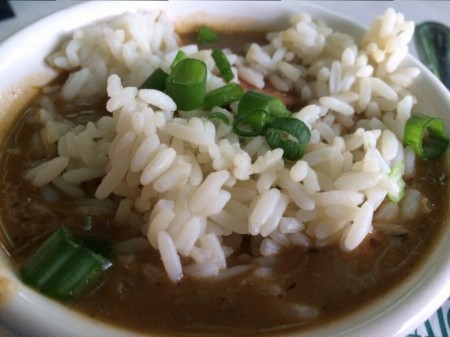 We ordered entrées upon arrival of our gumbo and again the server reminded us the kitchen may get backed up so there would be a wait.  His words rang true.  The restaurant was probably only at half capacity and we were long finished, with our leftover calamari packed in a to-go container by the time our entrées arrived.  With only two of us dining, we would be hard pressed to recommend this as a good spot for a larger group on the weekends.  I can only imagine the stress that would add to the kitchen if 8-10 entrées went in at once.  We ordered the seafood risotto ($19.95) and the chipotle braised pork tenderloin ($19.95).  Note to River City Brewing Company: the word “chipotle” is spelled wrong on your menu.  Online and in print.  Spelling fanatics everywhere will rejoice if you fix that.  The seafood risotto was loaded down with shrimp, scallops, spinach, and tomatoes.  The risotto is mixed with a citrus white wine sauce.  The risotto is exactly as you’d want it – creamy and stands alone by itself without getting runny.  The white wine sauce was superb and added another layer of richness to the risotto.  The scallops were tender and buttery.  The shrimp were a touch overcooked like the calamari, but not drastically so.  I loved how many tomato and spinach pieces were woven throughout the risotto.  The only distraction from this dish was a dusting of cheese on top that just did not go well.  I wasn’t sure if it was romano or parmesan, but if that had been left off the dish would have been exceptional.  Our other entrée, the chipotle braised pork tenderloin is pan seared and sliced, then paired with simple red potatoes and seasonal vegetables.  Pork tenderloin is a comfort food for many and this meets that standard.  This is fairly thick sliced pork with a gentle rub on the outside. The red potatoes and vegetables weren’t fussy or pretentious – just good, southern vegetables presented like your mom would do for guests. 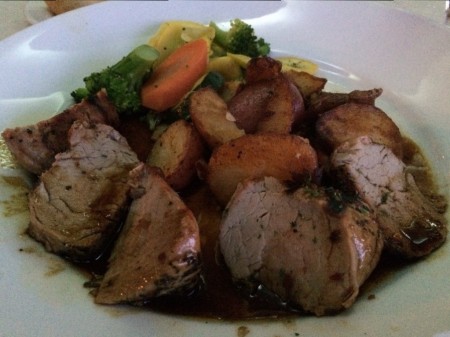 It’s notable that River City Brewing Company also has a Prix-Fixe menu available, which is marked as $25+.  This includes a starter salad or soup, one of four entrées, and a dessert.  We weren’t sure if the $25 was a starting price or if you can add things on for extra, but either way it’s a pretty good deal for a dinner with a view.  Overall our dinner at River City Brewing Company fell into the same category as our initial evaluation.  It’s decent food at a slightly higher price point than we’d pay elsewhere, but the setting makes it worth the trip.  The star of the dinner was the gumbo and that leads me to be interested in trying more of their Cajun-influenced dishes, that may be where their forte lies.  It continues to be a destination restaurant for guests and special occasions. 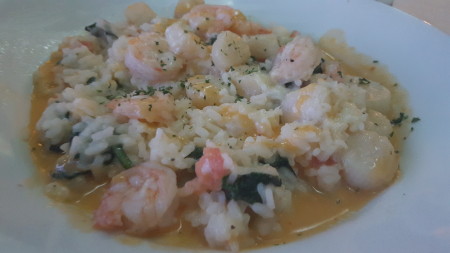