Tapa That is a little hole in the wall Tapas spot in Riverside. Their menu details how Tapa That became the realization of a dream to open a small restaurant between a brother who runs the front of the house and a sister who’s the chef. The restaurant is fairly small but also spacious. They’ve got a nice bar area and the tables are spaced comfortably. The environment is laid back and inviting. The walls are adorned with interesting local art for sale. It’s almost like a cross between the vibe of a nice lounge and an art studio. 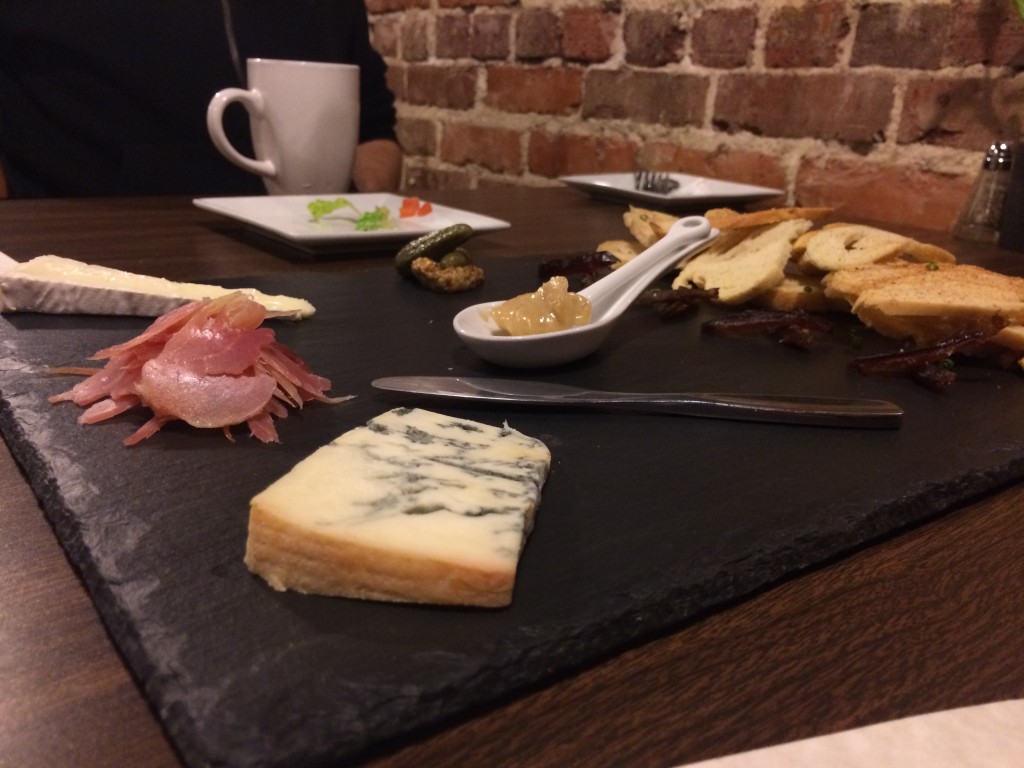 Food: We started off the meal with a Cheese plate($15). The plate included Gorgonzola bleu and Brie cheeses, Truffle infused honey, Prosciutto, dates and Toast points.
The Brie was good. Exactly what you’d expect from Brie.
The prosciutto was a nice mild version. The toast points had a bit too much spice on them for me and were a bit too brittle but they were fine.  $15 seemed a little high for two cheeses and a cured meat but the truffle infused honey was a really nice addition that added value. The truffle infused honey was really thick. It was definitely different. Although, if I’m honest I think I’d just prefer regular honey. Maybe I’m just a creature of habit? Next up were the chorizo tacos- homemade spicy chorizo on two warm corn tortillas, with house chipotle yogurt, shredded mozzarella, fresh romaine tomatoes and avocado topped with sour cream. Neither of the two of us dining really like sour cream so we skipped it on this one.  The chorizo tacos were very spicy. They kind of lit my mouth on fire. The flavor was amazing though and each of the ingredients complemented each other. If you like spicy this is the one dish you don’t want to miss. It was the highlight of the meal. If you don’t like spicy foods definitely pass. The next dish that came out was the Ham and Brie crepes($11). They came with mushrooms in them which wasn’t mentioned on the specials board. It would have been nice to know in advance that the dish had mushrooms since they’re such a strong flavor. I enjoy mushrooms but if you’re not a mushroom fan they’d pretty much ruin the dish for you. I’m a big fan of crepes. I guess because of that I found these disappointing since they just didn’t wow me. They were really simple flavors and we’re pretty forgettable. We tried to order a steak salad. We were told they were out of steak. We tried to order banana beignets from the specials board and they said they weren’t able to make them today. The menu is really small so it would be pretty easy to let you know upfront what’s not available rather than tempt you then dash your hopes of deliciousness. Alternately they could just use an eraser and take things they’re out of or not making that day off the specials board. The last thing we ordered was peaches and cream($5) which was listed on the specials board. We expected some kind of cool or creative dish. Instead we got a sliced up peach with a big dollop of whipped cream. I guess we should have asked for a description. Note: there are no descriptions on the specials board. 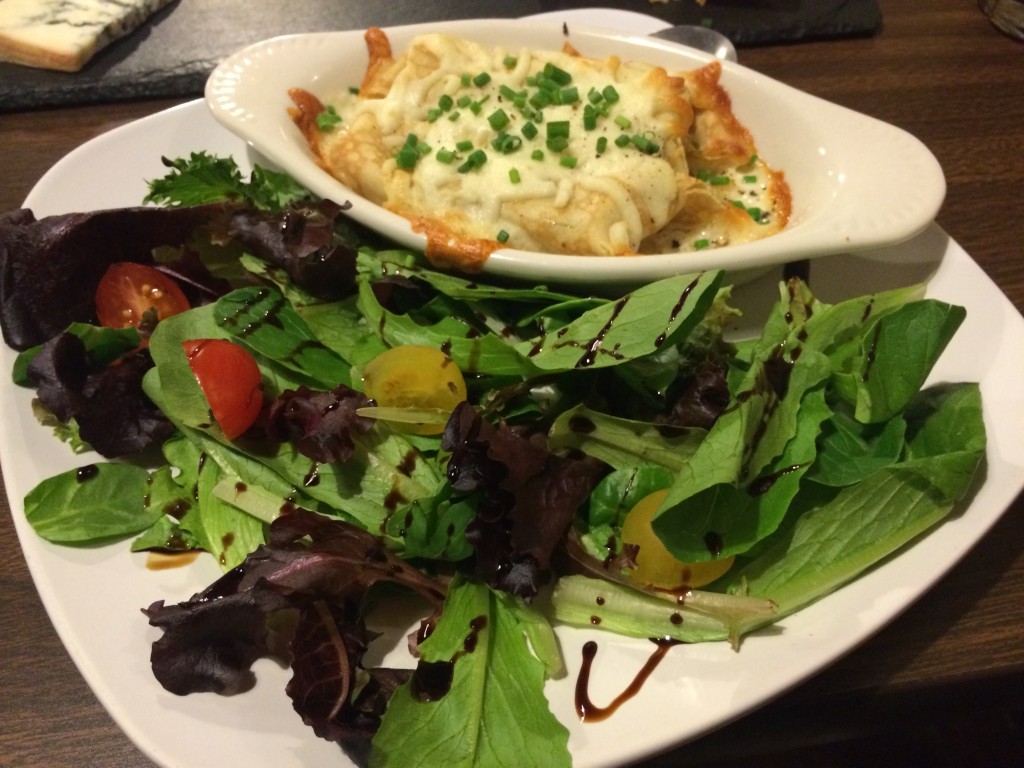 Tapa That Ham and Brie Crepes

Service: Our service was okay. The server was somewhat attentive and friendly. The waiter took our drink order immediately. Our food took a lot longer than expected to arrive. Should a cheese plate take 20 minutes from when you order it? Not in our book. We actually decided against ordering another round of tapas because the first few we ordered took so long. Don’t dine here if you need to be in and out under an hour. 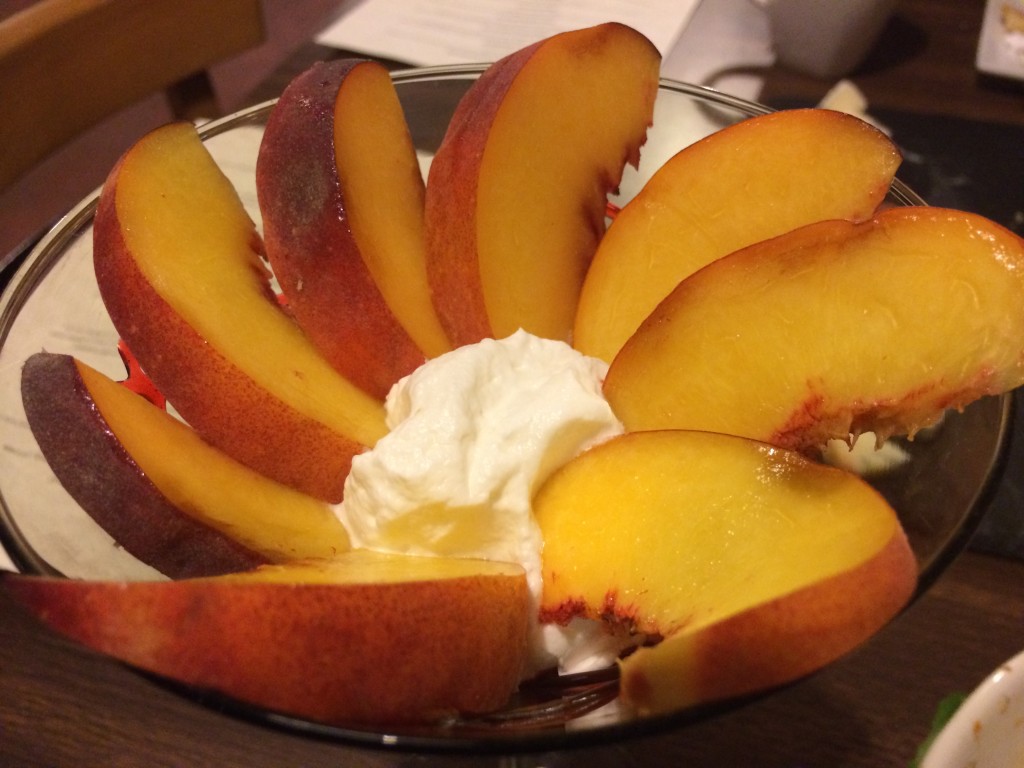 Tapa That Peaches and Cream

The food overall was pretty solid but the portion sizes were small even for a tapas place. While all the food was good, the only item we really loved was the chorizo tacos. This place seems like it has so much potential yet it misses the mark in lots of little ways. Additionally, the size of each tapa is a little smaller than some of the other tapas places we’ve visited and the prices are a bit higher. Tapa That describes itself as casual fine dining. It has prices to match that fine dining mantra. However, in our experience the food quality didn’t match the pricing. I’d like to think that maybe we just picked the wrong items to try. Maybe we’ll write a follow up sometime trying different menu items. 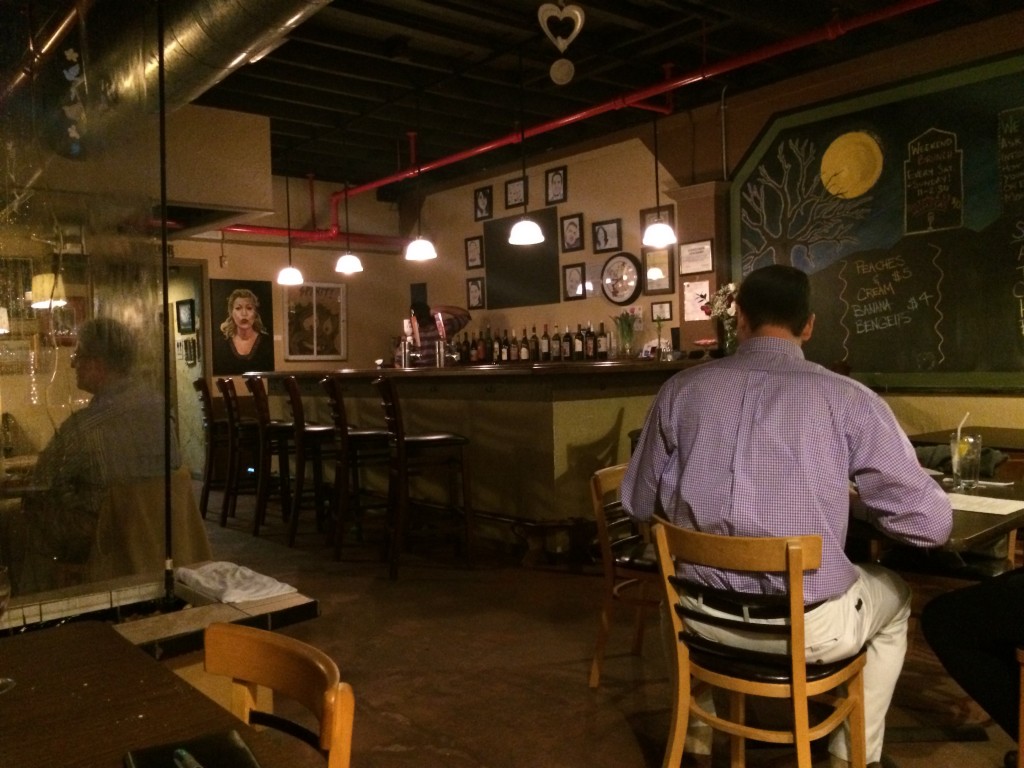 Bar at Tapa That

As a side note, the coffee was very  good and only $1. By far the best value on the menu.