Recently opened in the St Johns Town Center M shack is an upscale take on an old American favorite, the hamburger.  Well known Jacksonville Restaurateurs the Medure brothers launched their first M shack in Atlantic beach and have followed up that success with this opening in the St Johns Town Center.  They offer anything from your standard Cheeseburger to the Medurable with Foie Gras and caramelized onions.  I and even have a unique adults only milk shake list. 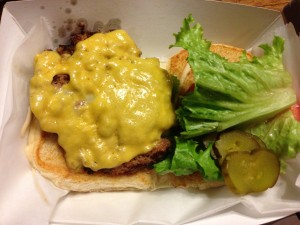 Food and shakes: We started offer the meal with a couple of the rich shakes on offer.  The chocolate shake($3.75sm $4.50lg) was very rich and clearly made with real ice cream.  It’s Easily one of the best chocolate shakes on offer in Jax. The marshmallow Brûlée shake was awesome. If you like liquid marshmallow fluff like you might get atop your ice cream at an ice cream shop you’ll love this shake.  It has a mild chocolate flavored base and has marshmallow fluff mixed in and toasted on top of the shake itself.  It’s pretty magical.  It reminds me of the sort of thing Willy Wonka might have in his chocolate factory.  I would have preferred if the mallow was blended a bit more evenly throughout but I imagine that’s almost impossible to achieve given the stickiness of the mallow. 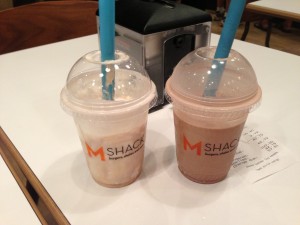 First we tried the M burger- American Cheese, Lettuce, Vine Ripe Tomato, Pickle and Shack Sauce. It was a really solid burger.  The meat was incredibly flavorful. They really have gotten the beef right on their burgers. The bun tasted fresh and was nice and soft.

The other burger we tried was the Sunrise burger- Bacon, Sunny Side Egg, American Cheese and Shack Sauce.  I ordered the egg over easy since I’m not a huge fan of sunny side up eggs.  The burger was really good. Again, the flavor of the beef was fantastic.  It was better than the vast majority of burger joints I’ve ever been to. The egg was done correctly and the shack sauce adds a little something special to their burgers. My only complaint was I would have liked more of the shack sauce on the burger. 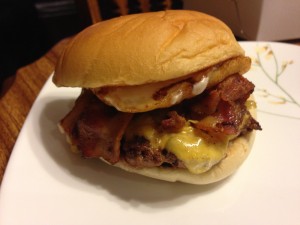 We ordered 3 different sides to try out.  The first was the truffle parmesan fries($4.95).  They honestly weren’t very good.  They were pretty bland and there wasn’t much flavor to them.  To be fair, we did grab our food to go and maybe they would have been better if we ate them immediately.  Still I’ve grabbed fries to go at plenty of other places and as long as the bag or box was kept closed they were just fine. 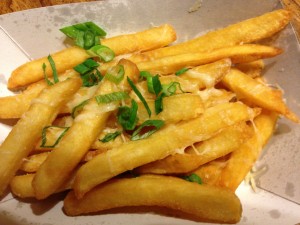 Next we tried the poutine fries($6.50). These had turkey, gravy, and cheese on them. The gravy was very tasty. The fries themselves were just okay. There was almost no cheese on them. What little cheese was there was under the fries.  These looked like they were thrown together in a hurry with no concern to what was delivered to the customer. 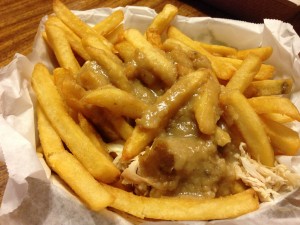 The last item we tried were the sweet potato tots.  They got this one right.  Often with sweet potato tots the sweetness of the potatoes is lost when they’re fried and seasoned.  These were done in a way that they retained their sweetness and still had a bit of crunch to them.  You’ll probably really like these. 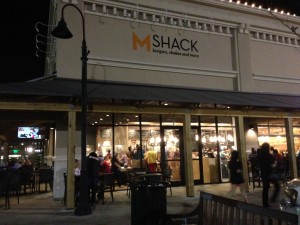 Service: Unfortunately M Shack pretty much gets an F in the service category.  We had 6 or 7 people in line in front of us and waited about 20 minutes to get our order taken.  Then we waited another 15 minutes to get our take out order.  35 minutes to get burgers is pretty much unacceptable. They had one very slow person working the register. Additionally, while the flavors of the food were very very good the food looked like it was thrown together in a rush.  At the time we visited the restaurant had only been open a week so I would expect that they will improve a lot as time goes on. 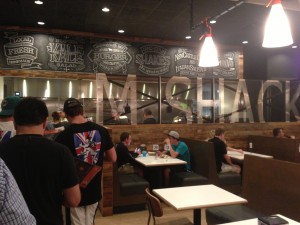 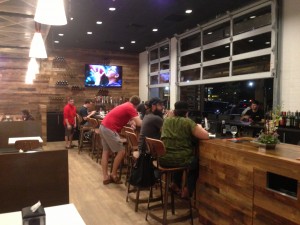