The Brazilian steakhouse has become a true favorite of the American meat loving public. What carnivore doesn’t love skewer after skewer of meat brought to your table for as long as you can stuff your face? Growing up in Jacksonville I can recall only two Brazilian Steakhouses in town. 5 or 6 years ago there was Tento at the beach and then there’s the current Brazilian mainstay Espeto which just moved from St John’s Ave in Avondale to Beach Blvd just over the intracoastal. Tento was pretty decent but could just never get enough traction with diner to build a following. I’m convinced Espeto has survived purely because they were the only show in town, not because they were really very good. Just a week ago Terra Gaucha Brazillian Steakhouse opened in Tinseltown. Honestly since the couple of locally owned entrants we’re had in the Jax restaurant scene haven’t been particularly great I didn’t have high hopes. Having traveled a fair bit I’ve been to Texas de Brazil, other Brazilian chains, and some locally owned Brazilian spots in other cities. Locally owned spots just don’t usually stack up to the chains as far as meat quality and the typical over the top salad bar which usually includes sushi, soup, charcuterie, cheeses and various other options. Terra Gaucha ended up being a wonderful surprise. 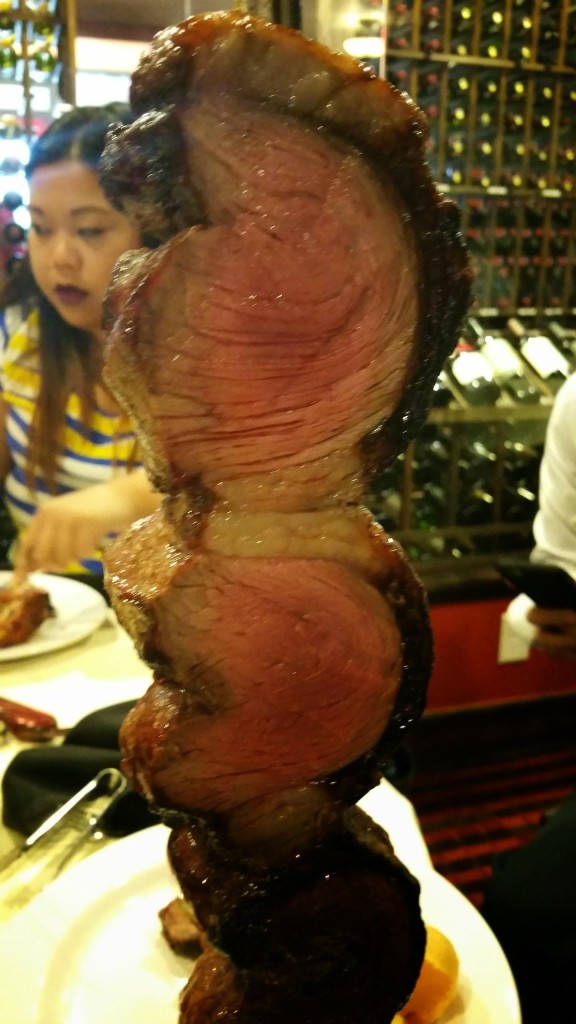 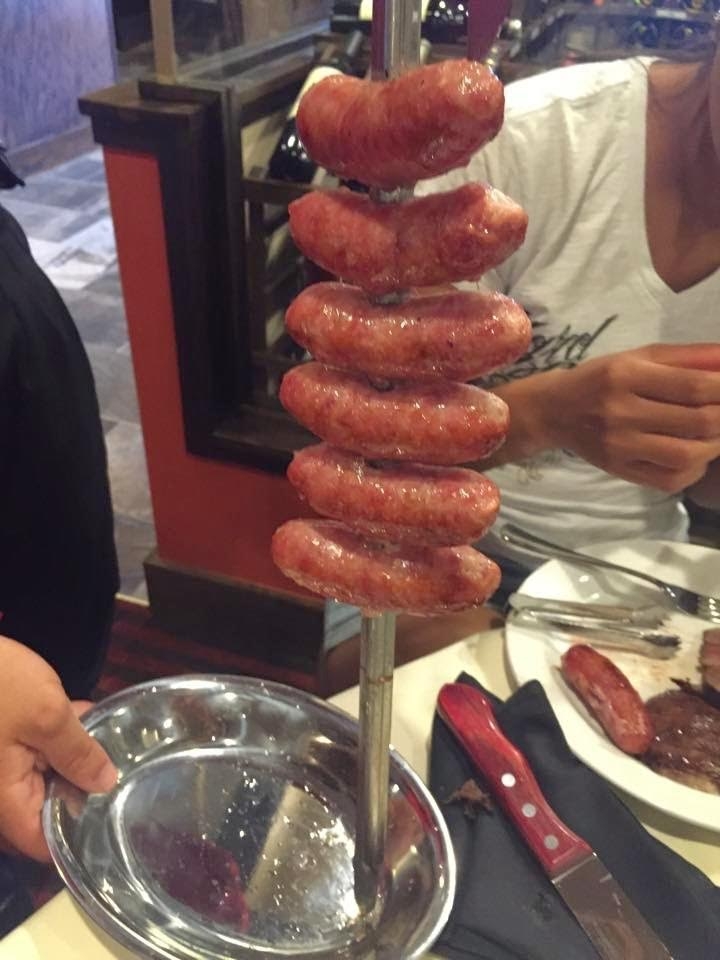 When I visit a Brazilian steakhouse the first thing I want to try is the Picanha. A salty half moon shaped top sirloin with a nice thin flavorful flat layer across the top, Picanha is the quintessential Brazilian meat. Terra Gaucha’s was perfect. To put it bluntly it’s some of the best I’ve ever had. The parmesan pork loin was very good. It was nicely prepared and the cheese was moist and not dry like it sometimes becomes on slow nights at a Brazlian steakhouse. We were here on a Tuesday which would obviously be one of their slower nights. The chicken wrapped in bacon was solid. The beef ribs were decent. The lamb chops were amazing. I’m not the biggest lamb lover but these were so juicy and flavorful that I had to eat two. The waiter offered mint jelly to enjoy it with which ended up being the perfect addition. The rib eye was surprisingly good as I often find that many Brazilian steak houses will use a cheaper quality of meat and this ribeye lover will become a ribeye hater for the night. These guys obviously didn’t skimp on quality. Like the ribeye, I also find that virtually every Brazilian Steakhouse uses horrible quality filet mignon. Filet is one of the cuts I order most at a typical American Steakhouse and something I always avoid at a Brazilian one. Terra Gaucha’s was actually really good. It’s not Ruth Chris quality but it’s the best I’ve had at a Brazilian Steakhouse. While we won’t cover the rest of the meats one by one, I will say we that across the board their meats are top notch. 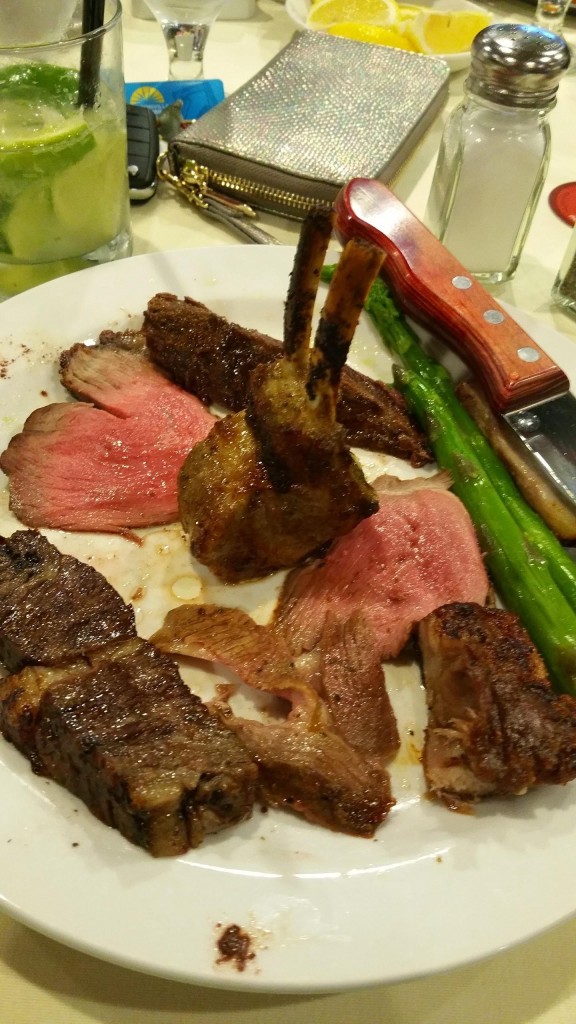 When we walked into the restaurant and were seated our waiter immediately recognized me from an event we did at another restaurant where he worked. Since this was the case we got impeccable service. With that said the rest of the room was provided excellent service from what we could tell.

The only knock we have on Terra Gaucha is the salad bar. But, do you really come to a steakhouse to eat salad? Their salad bar offers excellent salad options, Brazilian style rice, beans, roasted potatoes and some other basic salad bar stuff. What we missed that are the things you tend to find at the large chain restaurants like lobster bisque, sushi, and more hot vegetable options(I love mashed potatoes with my meat). There were a couple things Terra Gaucha offered that we haven’t often seen at other Brazilian Steakhouses like Fried yucca delivered to the table, really tasty cheesy gluten free popovers to eat with the meal, yucca flour to coat the meat with(a traditional meat add on Brazilians love), and caramelized bananas rather than the heavier fried bananas. Terra Gaucha also offer a full desert menu with most desserts running an additional $7. We were so stuffed that we just couldn’t try the desserts. 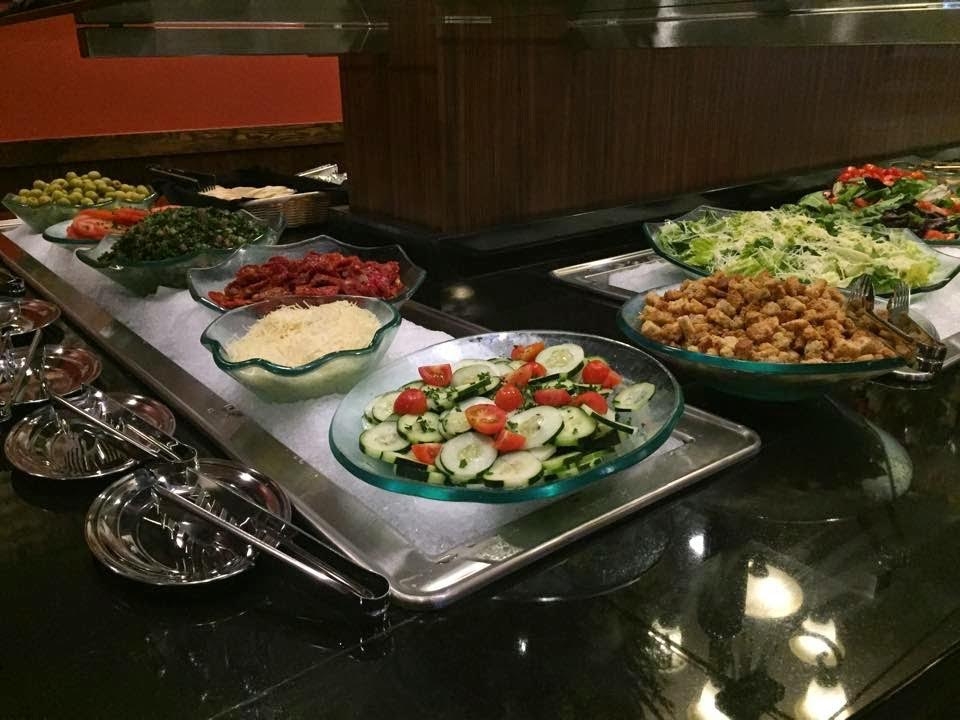 We got a chance to meet the owners; 3 Brazilian guys living in Orlando who had always wanted to open their own restaurant. They saw Tinseltown as a pretty perfect location and decided to use their knowledge from years in the industry to give it a shot and add an amazing Brazilian spot to the Jax Restaurant scene. Based on our conversation these guys seem to really have a passion for bringing their culture from Southern Brazil to American diners. Where others have failed we’re convinced Terra Gaucha will succeed. Terra Gaucha without question is the best Brazilian Steakhouse this town has ever seen and possibly the best we’ve ever experienced as well. These guys know their meat. Did we mention it’s only $36.50?