x
Thai Orchid has great Thai food.  Let me start off by confessing this isn’t my first trip to Thai Orchid.  Think about your list of restaurants that are close-to-home, familiar, and comfortable.  My list happens to include Thai Orchid.  So, I feel pretty confident in recommending it as one of the better , possibly best, Thai restaurants in Jacksonville.  The service is frequently okay, the ambiance is nothing too special, but the food is always great.  That makes Thai Orchid perfect for take-out.  If you eat in, you’ll see they do an amazing amount of takeout.  If you eat in you may be the only table while people stream in to pick up the their called in orders.
On this occasion we had our three year old with us, so I saw the menu a bit differently than I do when it’s an adults-only meal.  The flip-side is that given that we were the only diners we could make a bit more noise than would usually be acceptable. 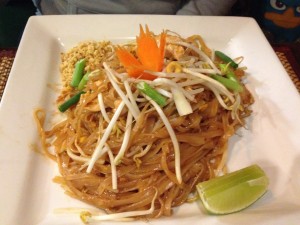 Food: We always order milk for the three year old.  I’ve not run into any other restaurants that have no milk available.  We knew there was no children’s menu but figured we’d find something that would be acceptable even to an @honesttoddler caliber critic.  Given that, we ordered pretty mainstream items on this trip.  I do recommend trying anything on the menu that looks a bit strange. Thai Orchid has never disappointed me even when I order things I expect to be a bit wonky.
On this particular trip we started with veggie tempura ($5.50). It’s good tempura.  This particular visit we had sweet potato, eggplant, onion, green pepper, mushrooms, and broccoli.  The veggie mix tends to vary but the Sweet and Sour type sauce that comes with it has just enough heat.
Everyone always judges a Thai restaurant by it’s Pad Thai.  Thai Orchids is good.  Maybe not the best I’ve ever had, but always great.  On this particular trip they confused the spice level.  I’ll mention that more below, but the Chicken Pad Thai ($9.95) was a bit spicier than usual.  The Pad Thai flavor held up fine to it though. Sometimes when Thai is spicier than you expect it crushes the other flavors.
Our next dish was Chicken Teriyaki ($9.95).  This had no spice whatsoever.  Served with rice on the side on top of cabbage and broccoli, the Chicken Teriyaki is two chicken breasts with teriyaki sauce.  It’s pretty basic but good.  Ordinarily we’d explore the menu a bit more, but this catered to the younger portion of the table.  The ingredients were clearly fresh, but I can’t offer a lot more as Chicken Teriyaki is a pretty basic dish.
We also ordered an extra side of steamed rice and steamed noodles ($1.00 each) as a safety net food.  Turned out we really didn’t need them.
Portions on both the main dishes meant we have lunch tomorrow as well. 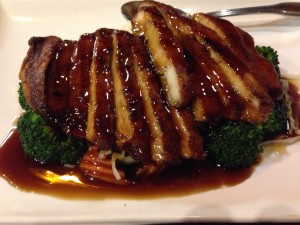 Service: I always feel as though they’re surprised when I walk in and let them know I’m dining in.  The restaurant seats 48, but I’ve never seen more than 8 people in there at a time.  Usually service is good enough, but nothing special.  I rarely have service issues here.  On this particular trip they confused the spice level on the two dishes we ordered.  It wasn’t a big deal as the Pad Thai we ordered spice-free was great with spice and the Chicken Teriyaki was just fine with no spice.  I sorta like that the wait-staff generally leave you alone.  Given that, this probably isn’t a place you’ll take a date to impress them.  Go for the food. 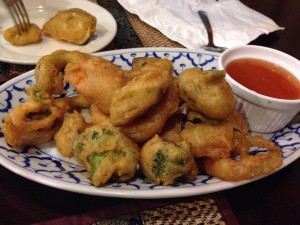 In the past I’ve ordered the Tod Mun Pla (fish cakes).  They were excellent, but a bit spicier than I expected.  I’ve tried all the curries they offer.  They’re great.  Don’t be afraid to jump around the menu, they prepare everything on it very well.
Like any Thai restaurant their spice scale is different than every other Thai restaurant.  I’d say the “medium” here is close to a “hot” at a mexican restaurant, but try different spice levels until you find what you like.  If you’re looking for take-out Thai, these are probably the guys.  If you want dine-in Thai be prepared for relatively slow service and a parade of take-out customers.
Positives:
Negatives: 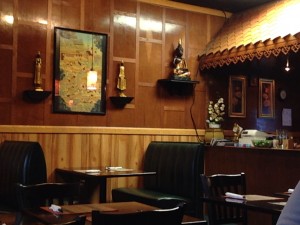