Cozy and charming are the perfect words to describe JJ’s. Wonderful French accordion music fills the air and you dine in a space that does an amazing job of allowing you to forget where you are for an hour or two and relax in the streets of Paris. JJ’s Bistro de Paris is a small fine dining French restaurant located on Gate Parkway near I295. The space is very inviting and attempts to whisk you away to another time and place in Paris. It actually reminds me a lot of the Paris hotel in Las Vegas. There’s even a decent sized Eiffel Tower replica in the restaurant. For the last week we’ve been in the midst of coming up with our list of the top ten most romantic restaurants in Jax. I’d heard JJ’s Bistro de Paris might fit the bill so I thought I’d stop in and see for myself if it might be a good candidate for the list. For the first 15 minutes we were there I was convinced JJ’s would be a place we could recommend as one of the most romantic in town. Unfortunately as the food and service spoiled the environment I was saddened to realize we just couldn’t recommend it.

We started things off with the soup of the day which was a Curry Vegetable soup ($5 cup, $7 bowl). I sort of expected something akin to a thinner cream based soup. Instead I got a broth based soup which had an amazing flavor to it. If all vegetable soups tasted this good I’d order them more often! 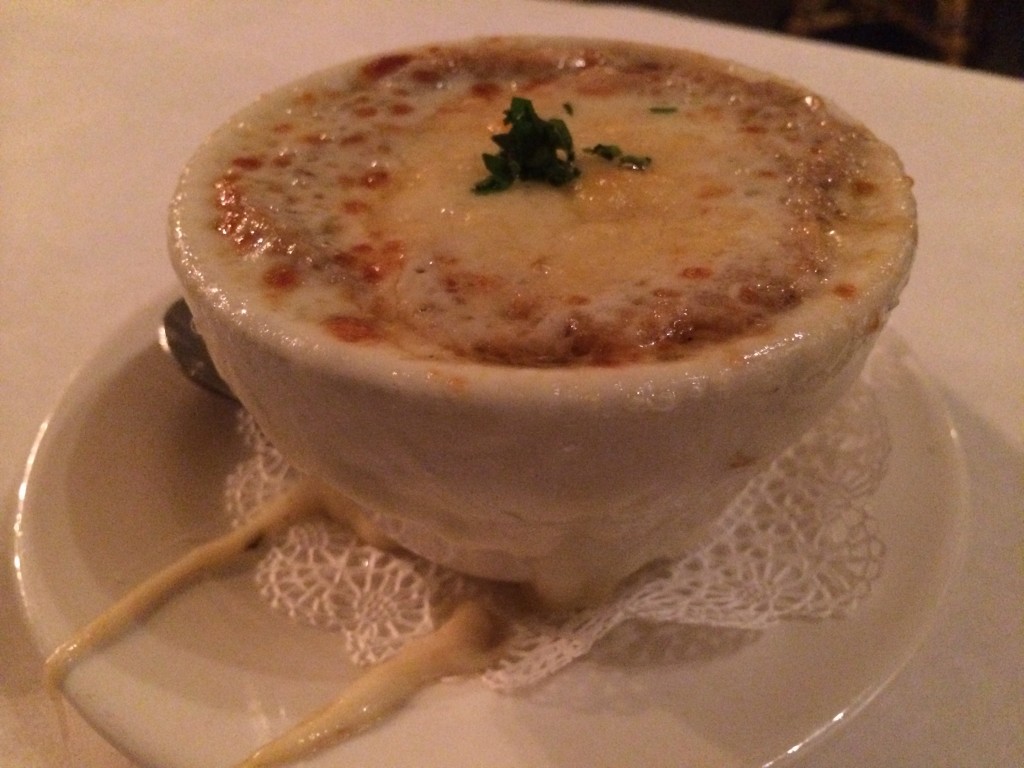 Being cheese lovers we couldn’t help but try a cheese plate next. We asked the waitress to recommend one that was strong but not strong to the point of stinky. She said the Les Pyrennees plate($19) was their most popular. We figured we’d give that a shot. The cheeses included in this were manchego, crottin Maître, and Petit Basque. We actually didn’t realize manchego was one of the cheese on this plate. If we’d have actually read each cheese on the plate we’d probably chosen a different plate since manchego is a really common cheese. My general rule for cheese plates is if I can buy it at Winn Dixie I shouldn’t buy it at a nice restaurant for triple the price. When I order a cheese plate at a high end restaurant I expect unusual, uncommon cheeses. The other two cheeses weren’t very eventful either. One was a goat cheese that didn’t taste much different than any other run of the mill goat cheese. The other tasted very similar to a slightly milder manchego. The accoutrements on the cheese plate were pickled cauliflower, fig purée, red grapes and sweet pickles. These were decent add-ons. The inclusion of pickled cauliflower was interesting with it having almost a pickled cinnamon-y flavor to it. 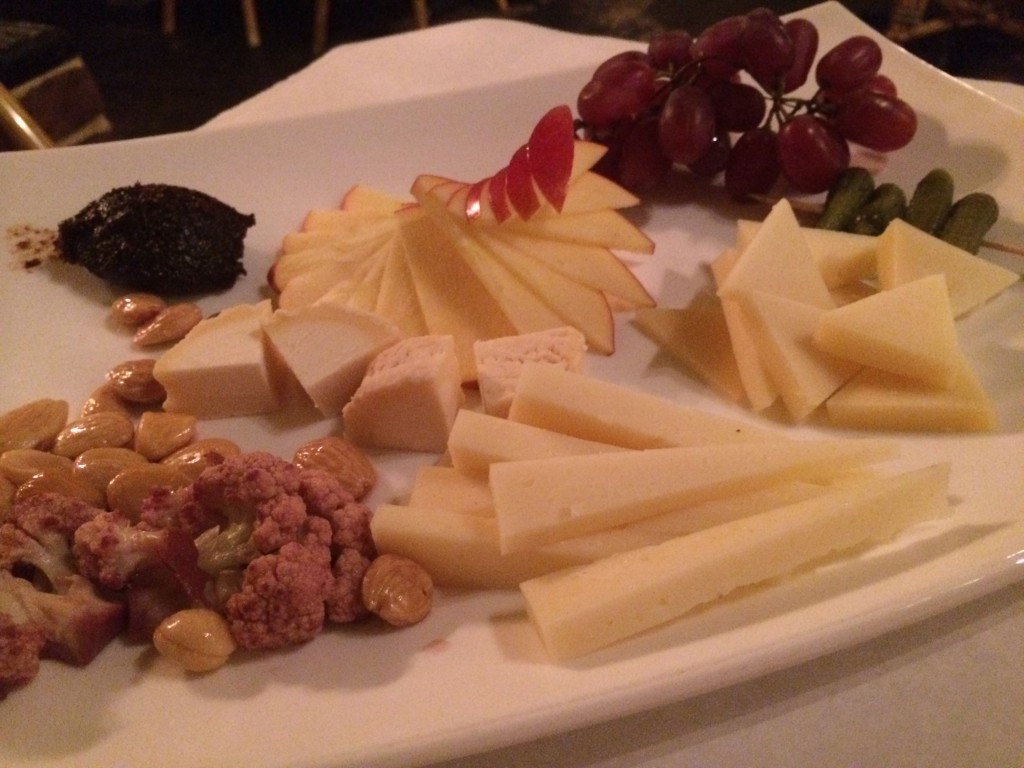 Our meals came with a small dinner salad. Unfortunately when it arrived the lettuce was a bit wilted which was really disappointing given the high price of dinner at JJ’s Bistro de Paris. For entrees we ordered the confit de canard($27)- Crispy seared duck confit served with port wine reduction and pommes frites and the risotto aux crustaces($28)- Sautéed shrimp and scallops in a hazelnut cream sauce with savory risotto. The duck confit was limp and could even be described as mushy to some degree. The menu specifically states “crispy seared duck”. The skin wasn’t at all crispy. Crispy skin “makes” duck dishes for me. When you tell me it will come out crispy on the menu I get excited. But, when I pay a price that is among the most expensive in town for duck and I get a horrible entrée I’m doubly irritated. The French fries were nice and crisp. That was a plus. I’d hope that at a fine dining establishment they could get French fries right. The risotto was very very firm….too firm. The scallops weren’t cooked well. They were rubbery and chewy. Red Lobster could cook better scallops than this in their sleep. When you go to a fine dining restaurant you expect fine dining quality and attention to detail. You’re paying a lot more for the expertise of the chef to shine through in the product delivered to your table. These entrees were anything but fine dining quality. 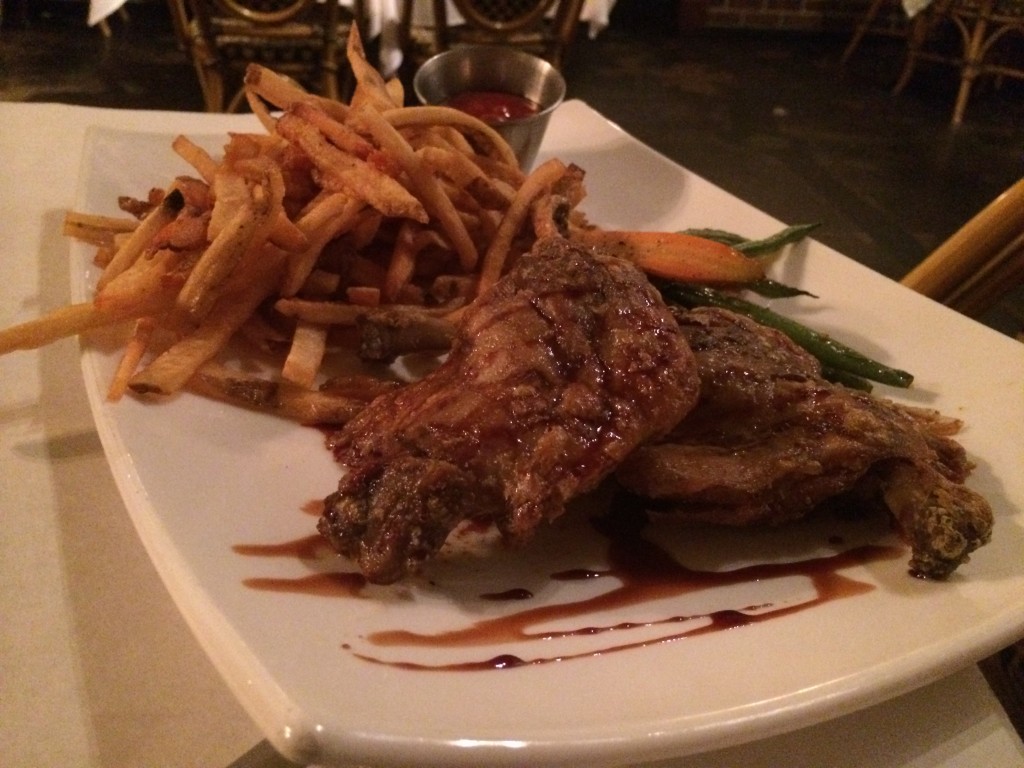 Desserts are where JJ’s Bistro de Paris really shines. There must be 40 different dessert options. We were pretty full but we couldn’t help but tackle a dessert or two. The first was a white chocolate orange liqueur truffle. This one tasted just like those chocolate oranges that come in the foil wrapper around Christmas time, where you peel out and eat chocolate wedge but more rich……a lot more rich. We liked it. It was a fun sort of dessert that was just the right size for when you’re really full after dinner but can’t stop yourself from dessert. The second dessert we tried was the blueberry cheesecake. It was rich, creamy, and pretty darn sweet. It was OH SO DELICIOUS!!!! Man was it good! It really had a flavor and texture that was half way between typical cake and cheesecake. I can’t get over how much I loved it. If you have a huge a sweet tooth and love blueberries this is your cake. 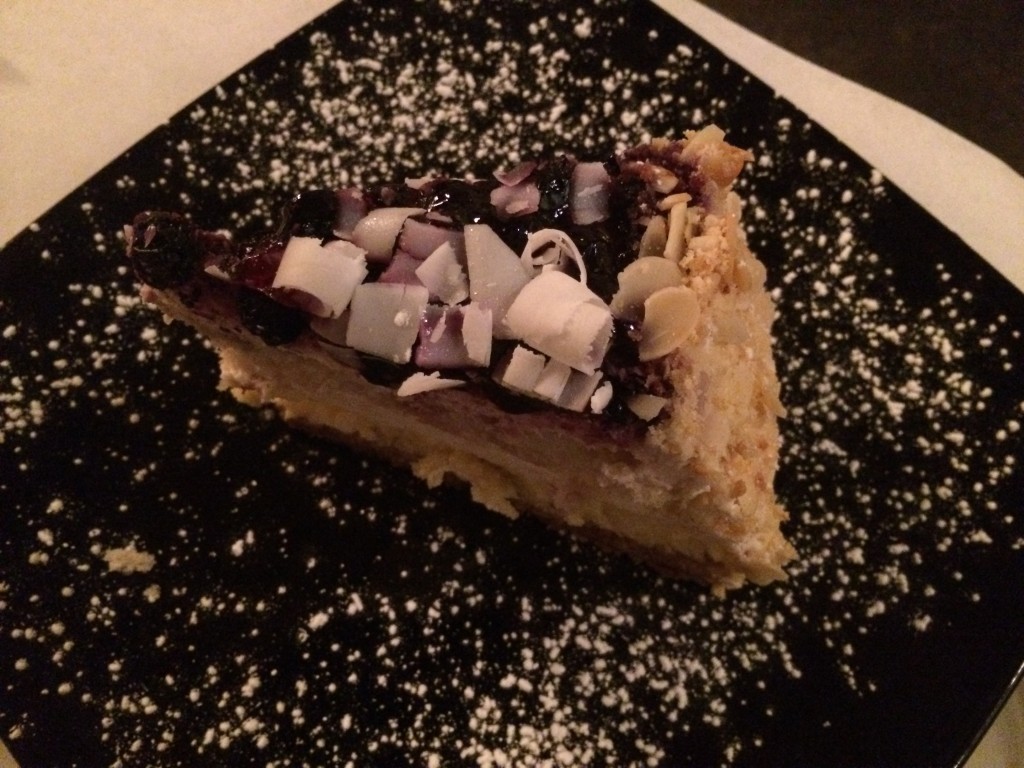 The service at JJ’s would have been fine at a mid-tier restaurant where you paid $13 to $17 an entree. Our glasses were never empty and the waitress was generally attentive. At fine dining for a price of high $20’s to low $30’s per entree I expect more. The waitress should be really attentive to details. You should feel a bit pampered. Your needs should be anticipated. Maybe I’m asking too much for such a small place? 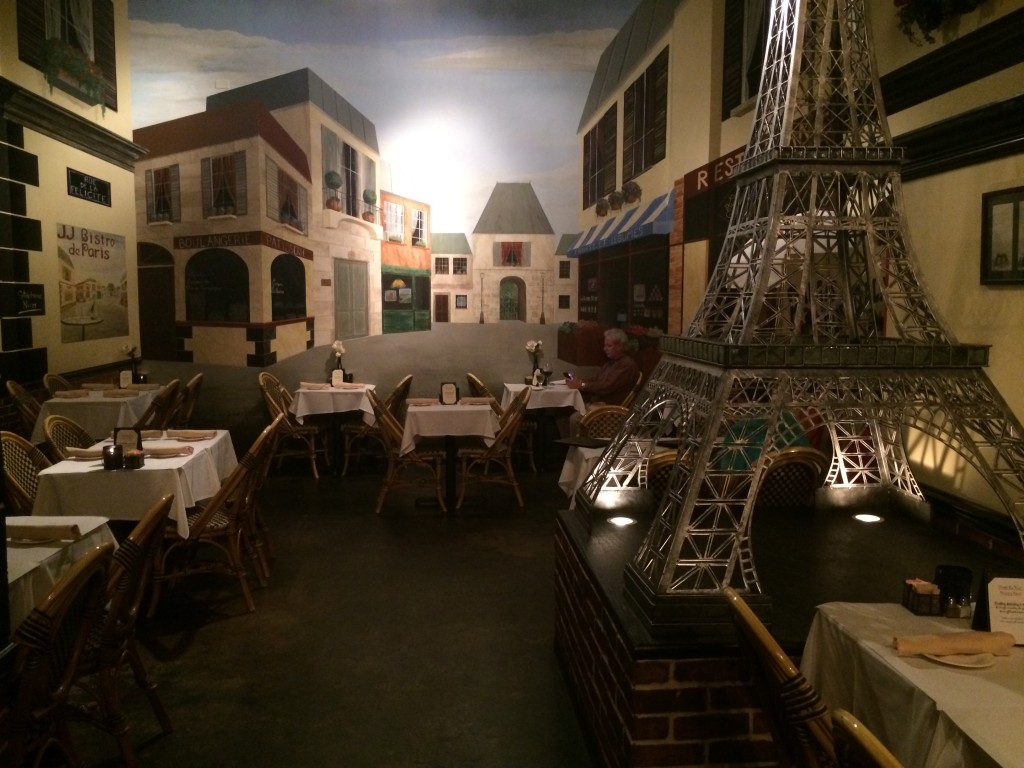 Overall we were incredibly disappointed with JJ’s. What should have been a fantastic fine dining experience in a delightful atmosphere ultimately was one of the biggest let downs we’ve had at a restaurant. JJ’s served us poorly prepared food, charged us an astronomical price and failed to come even remotely close to the standard we expect from a fine dining establishment. 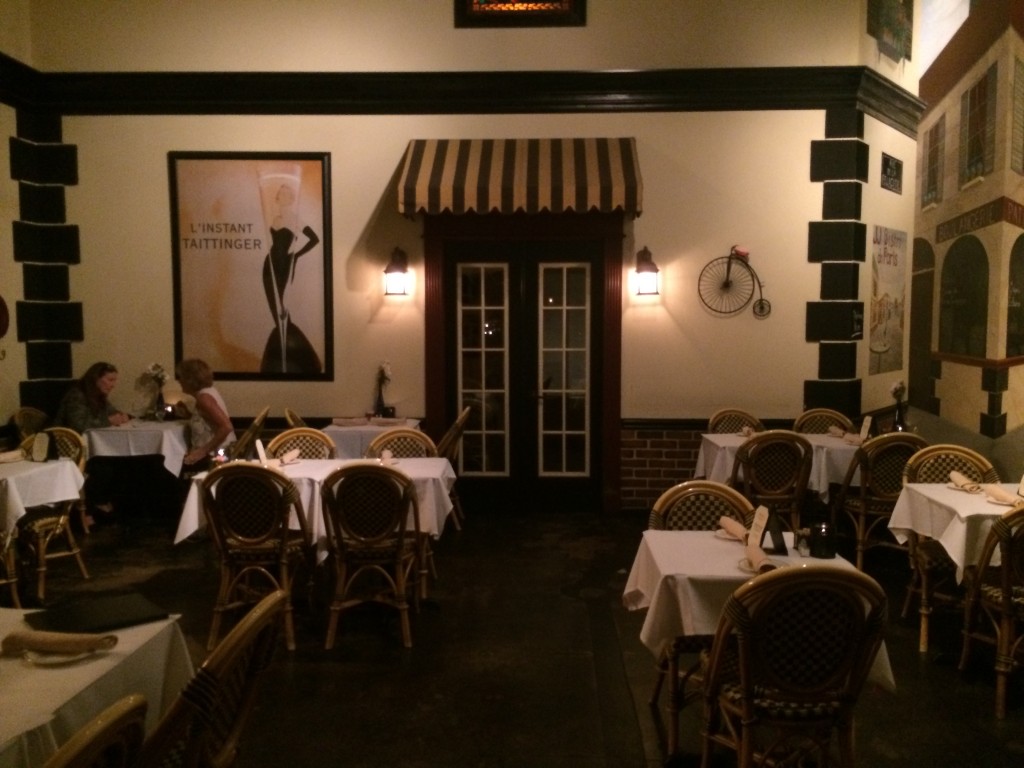 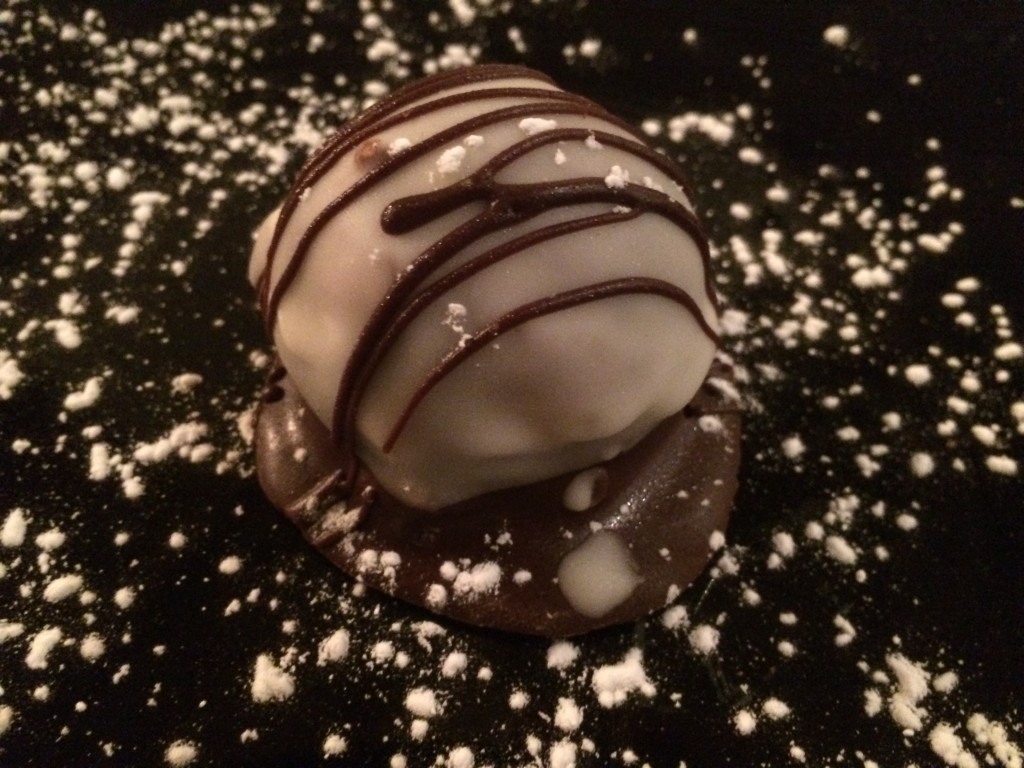 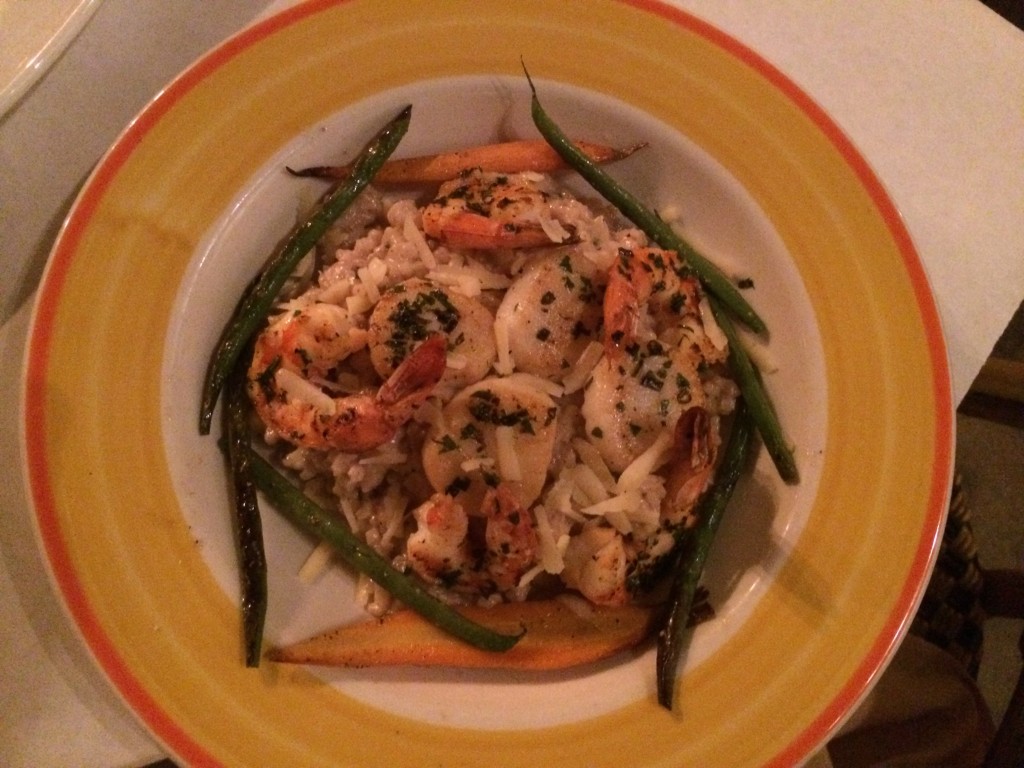