Gumbo Ya Ya’s has been in Jax for many years and despite having been a time or two, we’ve never done a review.  The time has come.  Gumbo Ya Ya’s is a Cajun/Creole restaurant on the corner of Beach and San Pablo.  It’s a small place with under ten tables inside and a larger patio dining area.  They do pretty steady business.  Their food is authentic, and accordingly many menu items are spicy and/or fried.  You need to know that going in, because if you are looking for something else you will be disappointed and it won’t be Gumbo Ya Ya’s fault. 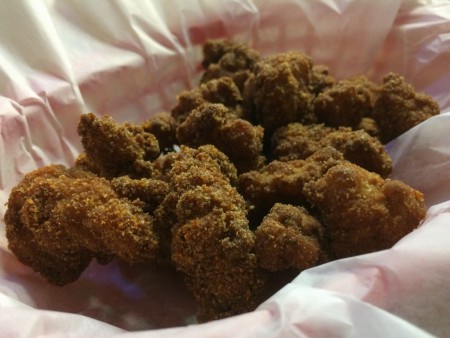 The gator tail was a generous portion size.  The breading had cornmeal in it, which makes for a courser texture.  It was really good gator tail, not too chewy like it can be when it’s poorly prepared.  The cornmeal breading was a nice change of pace.  If you’re a gator tail fan we’re pretty sure you’ll love it.  The boudin balls were just okay for us.  We felt the flavor was a bit bland, although they were spicy.  The effect was no flavor, then mouth on fire.  We called another food writer friend who hails from Louisiana and she happens to love Gumbo Ya Ya’s boudin balls.  At this crossroads we say make your own decision.  The boudin balls weren’t for us, but they might be for you.  Maybe we just caught them on the wrong day. 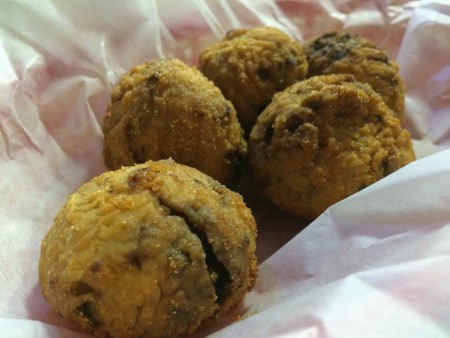 The seafood gumbo was legit.  It had depth of flavor from the shrimp and vegetables and a very slight kick to go with it.  I would not consider it spicy and it was not marked as spicy on the menu.  Have the gumbo.  The red beans and rice was authentic and earthy with a noticeable spicy kick.  The shrimp étouffée was up there with the gumbo on a taste level.  It was flavorful.  The gumbo, red beans and rice, and shrimp étouffée were all served with french bread from Gambino’s in New Orleans.  The bread was excellent – soft and squishy on the inside, slightly crusty on the outside.  The cajun creamed corn was the real winner of the night.  It was probably the spiciest thing we ordered, but the flavor profile was out of this world.  Each bite started creamy and sweet and then moved to warm and hot and spicy.  We felt like we experienced every flavor of the flavor rainbow in one little side item.  Don’t miss the corn at Gumbo Ya Ya’s. 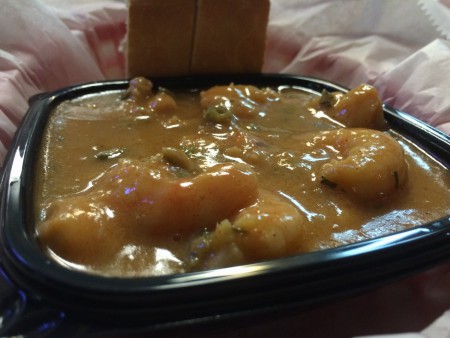 The grilled cheese poboy was made on Gambino’s French bread, as are all the poboys at Gumbo Ya Ya’s.  It wasn’t great.  It had a couple kinds of cheese, but it tasted overwhelmingly buttery.  I suspect they slathered the inside with butter, added the cheese, then cooked it.  We ordered it for a child, but none of us would order it again, even our grilled cheese loving kid.  We ended our meal with beignets, because how can you not?  Woah.  These were melt in your mouth amazing.  Forget everything else, just eat beignets for dinner!  And if you’re going to do that, make sure you go sometime between Monday and Thursday, because they aren’t able to make beignets on the weekend because of a limited number of fryers.

The service at Gumbo Ya Ya’s was reasonable.  We had only one complaint, which was that after our food was served we couldn’t manage to get the waitress’s attention for drink refills, which we needed in order to eat some of the spicier dishes.  It appeared to be more of a matter of unfortunate seating and timing because we were seated far to one end of the restaurant and the waitress was pretty busy.  But we also kept trying to get her attention anytime she walked near us and that was not effective.  You don’t want to holler at someone, that’s not cool.  But several waves and polite “excuse me’s” did not do the trick.   Overall, Gumbo Ya Ya’s is a fairly authentic New Orleans style restaurant.  They stick with traditional Cajun/Creole cuisine, so you won’t find much for less adventurous or picky palates there.  Unless a corn dog will get the job done for your picky eater.  Curiosity or maybe the fat kid gene got the better of us and we ponied up the $1.95 for one which turned out to be much larger and much more enjoyable than we originally anticipated. 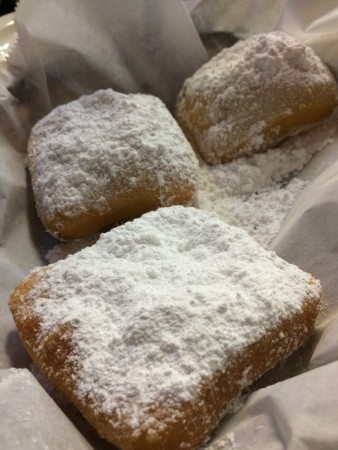 We loved the gumbo, the cajun creamed corn, and the beignets.  We didn’t love the grilled cheese poboy, which is not a real cajun or creole dish anyway.  One thing we noticed that made us a little crazy is the microwave is sitting out behind the bar and you can see when they heat or reheat things.  At least hide that in the kitchen, dude!  We appreciate that Gumbo Ya Ya’s offers a number of grocery items direct from New Orleans restaurants and companies and that they ship in Gambino’s bread and olive salad for more authentic NOLA food.  For affordable and authentic Cajun cuisine in Jacksonville, Gumbo Ya Ya’s is a fairly solid choice.  Did we mention the gumbo is legit?