Located in historic Springfield Uptown Market is a soup sandwich and salad sort of place for lunch that turns into an upscale restaurant for dinner. Lunch items run $8-$10 and dinner entrees around $16 average. They place a strong emphasis on freshness, creativity, and healthy options. They work hard to source fresh foods locally and often use organic meats and produce in many of their dishes. The restaurant itself has a neat downtown feel to it with faux scaffolding with mini spotlights hanging from it providing the lighting. Since we don’t often get this feel from Jacksonville restaurants it is really refreshing. 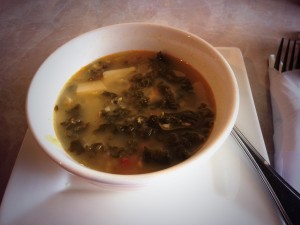 Food: On this visit we had a party of 6 and while there were a bunch of salad and sandwich options nearly everyone was drawn to the specials. First off was the soup of the day which was the chick pea soup($2.95). It was outstanding. The soup was broth based and had great flavor.  Too often pea soups overwhelm you so much with pea flavor that you don’t experience enough of the other flavors in the soup.  The flavors in this soup were balanced beautifully.  The chick peas in the soup were mostly ground up and mixed in with chunks of potato and large pieces of kale.  Normally I’m not a huge fan of kale and it’s sometimes bitter taste.  In this soup the kale was cooked and seasoned excellently and I really enjoyed it.  This soup was very filling.  That’s not something I normally expect from a broth based soup. Overall it was nutritious and delicious. One of the specials we tried was the shepherd’s pie($10.95)-ground lamb and beef, carrots, onions, corn, mashed potatoes, cheddar cheese.  The Uptown market version of Sheperds pie came with a pool of meat and veggis surrounding two domes of mashed potatoes all covered with shredded cheddar cheese.  While I normally prefer a more traditional shepherd’s pie where a potato layer covers the whole dish, this iteration of shepherd’s pie was a very solid presentation of the dish.  The meat and veggies had good flavor. The veggies were soft without being mushy. The potatoes had good flavor. The mild cheddar cheese on top added nicely to the overall blend of flavors. 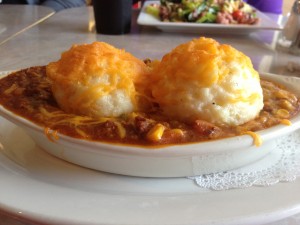 The other main dish we tried was the seafood enchilada($11.95)- Shrimp, Mahi, onions, peppers, sour cream and cheese sauce.  The mahi and shrimp in the enchilada were blackened. The seasoning used to blacken the fish and shrimp was really tasty without being too overwhelming. The cheese sauce almost tasted like a cheesy alfredo. If you like blackened fish and cream based sauces you’ll really like this dish. Thai Roast Beef Salad ($11.95)– Rare roast beef, mixed greens, snow peas, onions, green peppers, cucumbers, tomatoes, and ginger vinaigrette. While I wasn’t able to sample thai beef salad the couple of people in our party who tried it loved it and I was amazed at how much meat came on the salad. I doubt I could finish the whole thing in one meal. I don’t think either of the people who ordered it finished the whole thing. 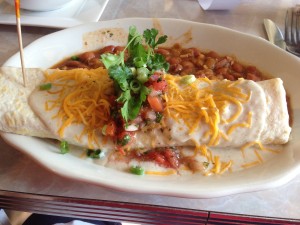 Service: I was really impressed with the service at Uptown Market. The wait staff was very positive and upbeat. In a busy restaurant all the food came out quickly and food never got delivered to a table until everything was ready. The kitchen is fairly open and you could easily see that it was remarkably clean. Our waiter was very attentive and also knowledgeable about the menu. My one complaint is that with a party of 6 when we received the bill a 20% gratuity was included. I’m guessing this is because we had 6 people in our party. This wasn’t pointed out to me and I nearly left a 20%+ on top of the included gratuity.  Thankfully someone else in our party saw the included gratuity and pointed it out to me. I don’t understand the need for an included with a mostly white collar weekday lunch crowd. Additionally including a 20% gratuity seems a little ridiculous. With that said we did get great service and I guess in a roundabout way they did save me money since I’d have probably left a bit over 20%. 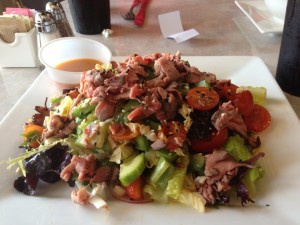 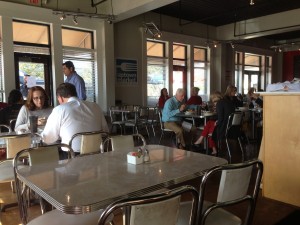