Last year Jacksonville welcomed the Legends(formerly Lingerie) football league to town. In their first year in Jax the team won both home games overcoming Atlanta and Baltimore by wide margins, then lost two games on the road to just miss the playoffs. In their second year in Jacksonville the Breeze return 4 of the LFL’s best players in quarterback KK Matheny, wide receiver Bryn Renda, Saige Steinmetz RB/DL, and Adrian Purnell OL/LB. This year they’ve started things off with a bang besting Baltimore on the road 27-12 on the back of a huge performance from Saige Steinmetz running for 146 yards and 3 TDs. Their home opener is this Saturday April 19th with kick off scheduled for 8pm at The Jacksonville Arena. We recently got a chance to reach out to quarterback KK Matheny and ask a few questions about her experiences playing for the Breeze. 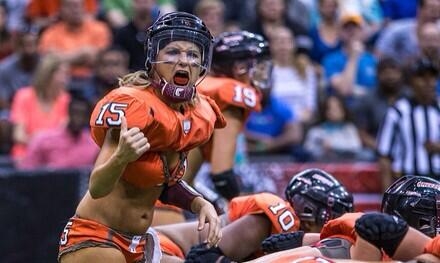 1. How’d you get started playing in the Legends Football league?
I was asked while in college playing in a flag football national championship for USF to come tryout for a professional women’s arena league. I was curious what the LFL was all about but skeptical at first. Once I went to the tryout and saw how amazing the athletes were and how serious everyone was about football it immediately sparked my interested and I signed on. 4 years later still going strong 🙂

2. A year ago the league changed it’s name from the Lingerie football league to the Legends football league. What are your thoughts on the change?
I love that the league changed the name just for the simple fact of the lack of respect people would give us initially Bc of the name until they came and saw us play! As an athlete you put so much time in effort into your game you hate to see people gain a false impression of it Bc of the name. I believe now with the name change it shows as well as our play on the field that we are serious athletes and take pride in our abilities and the opportunities we’ve been given to showcase them!

3. The Breeze was previously based in Tampa. What’s the move to Jacksonville been like for the team?
The move for the team has definitely been an obstacle for us (women from Tampa) to overcome but the league has made the transition a lot easier on us as far as taking extra steps in accommodating our trips back and forth. Our hotel sponsor in Jacksonville, Wyndham Jacksonville Riverwalk has been very helpful to us and we are very grateful. 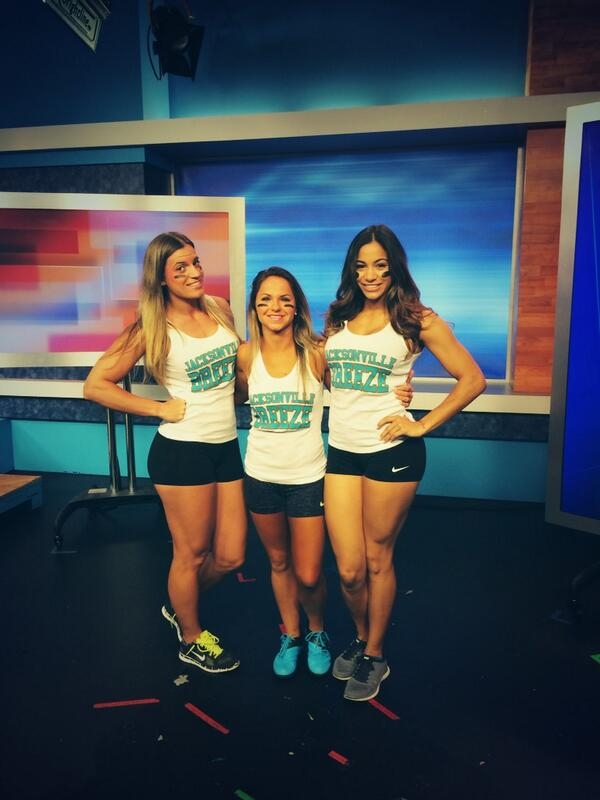 4. What’s the toughest part about playing in the Legends football league?
The toughest part about playing in the LFL I would say is the time commitment. The time we put into practice, training, off season preparation is just as much time as you see with pro NFL athletes but we are also juggling full time jobs as well as many women have families and kids. One day when we are able to make this our job and get compensated it will take away this extra stress and make it a lot easier on the athletes. In the mean time we all love this opportunity to play the sport we love and don’t take anything for granted!

5. You seem to be one of the smallest players in the league at 5’2″ 120lbs yet you’ve somehow found a way to be one of the best QB’s in the league. How have you overcome the challenge that your height presents?
I have been an athlete at all levels of play and have been faced with the per say “challenge” of being short. I have learned to adapt in every sport I play and love when people take me lightly because of my size so it just motivates me more. I don’t see my height as a challenge, I see it as an advantage because I find ways to do things people vertically inclined can do and work on doing them even better! I am a true scholar of the game and loving learning more and more every game about the opponent and about each defensive weaknesses that are pointed out on film. The same way Drew breeze and Russell Wilson excel despite their under average height, I also feel no draw back 🙂

6. Do you or any of the other players in the LFL get paid to play?
We do not get paid to play as of now. But as athletes are hoping the league grows so much we will very soon and look forward to that day! Right now we love to play the game of football and enjoy every minute!

7. We noticed you were chosen to play for the LFL all stars in Australia. What’s was that experience like?
The experience over in Australia was truly amazing! I feel so extremely blessed to have been able to play the sport I love with amazing athletes on such a big stage in Australia! When the best athletes of the east and the best of the west get together it’s truly something special to see everyone’s skills on display! I loved every second while we were playing in Australia they had amazing fans and made life long friendships, could not have thought of a more fulfilling trip!

8. When we went to the two Breeze home games last season we noticed there weren’t a lot of women in the stands. What would you say to female sports fans in Jacksonville to convince them they should come out and watch an LFL game?
I’ve seen over the years the amount of women that follow our sport has definitely grown and that has been Bc they respect the play on the field once they see us live in action! I would strongly encourage all women weather they love sports or not to give it a chance come out and see how hard we work, how hard we hit, and how hard we play, I promise they will fall in love with the passion and talents we put out on the field as female athletes!

9. What do you enjoy doing when you’re not playing football?
When I am not playing football I love spending time with my family, my dogs, and God. I am very involved at my local church The Crossing and enjoy hanging with my friends! I also love to dance and listen to all types of music, especially ballroom dancing is a passion of mine. I am an Espn addict and aspire for the opportunity to be an ESPN sportscaster one day 🙂