Our website is very focused on the locals spots. We don’t anticipate that ever changing. We’ve decided that in addition to all of our regular content we’ll also from time to time share an article about new menu offerings at some of the chain restaurants around town that ask us to do so. Recently, we were invited out to try a few items from Pollo Tropical’s new 510 calories or less menu. Pollo Tropical originated in Miami and they are well known for their fresh, antibiotic free chicken and Caribbean style sides. There are four Jacksonville locations spread around town including Town Center, River City Marketplace, San Jose Blvd, and Old St. Augustine Road.   I personally love Pollo Tropical’s Tropi-Chop bowls and so I was excited to taste some of their new menu items.   Plus, their menu release timing is perfect for the ever popular “New Year Weight Loss Resolutions”. 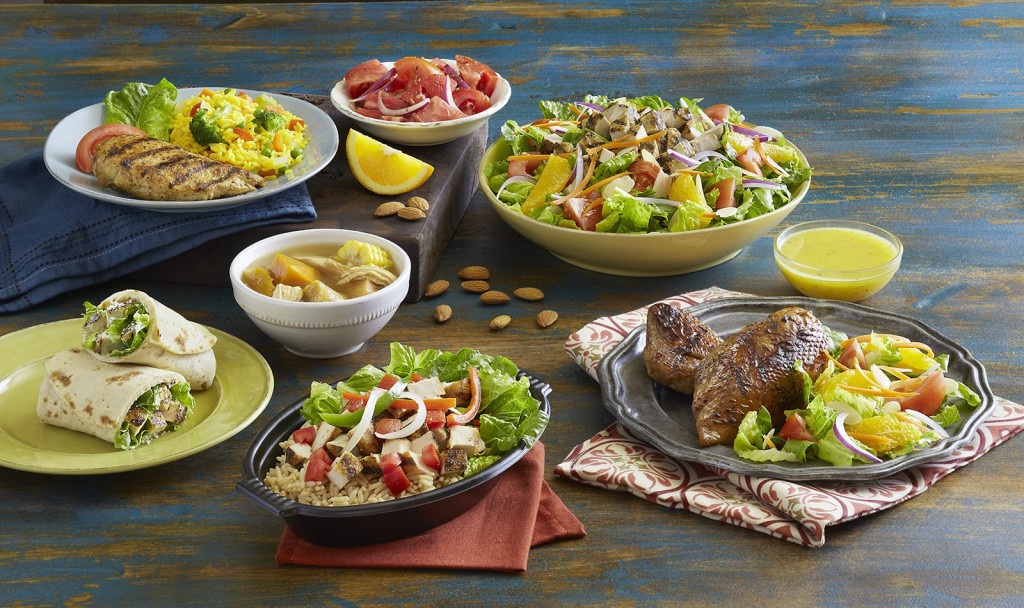 For this tasting I went to the River City Marketplace location during lunch and it was incredibly busy.   The employees handled the volume of customers very quickly and it didn’t take me nearly as long to get to the counter to order as I thought it would. The general manager took my order and gave me a quick guide to the new menu. The menu is called the “Tropical Lite” and it has 5 choices that basically take the same components and style them differently.     As previously stated, my usual order is a Tropi-Chop bowl loaded down with half their menu choices, so I opted for that as part of my meal. I also ordered a Lite Citrus Chicken Salad. I typically drive-thru at Pollo but decided to dine in this meal. I loved that my food was delivered to me.   I actually had to hover around and wait for a table but nearly as soon as I was seated my food was brought to me. The manager had the foresight to place my salad almonds on the side in case of food allergies which I thought was pretty excellent customer service.

Most times that I order my Tropi-chops I order the pork. The Tropi-chop Lite that I ordered today had their flame grilled chicken, brown rice, romaine lettuce, and tomatoes. This also comes with bell peppers but I’m allergic so I removed those. (340 calories, $4.99) If you’re accustomed to their Tropi-chops, this one will surprise you. On the main menu, the base of the bowl is the rice choice and any additional toppings are just layered one on top of another. The Tropi-chop Lite is basically half chicken and rice and half salad. The chicken is extremely good. The marinade is flavorful and the chicken is about as perfectly tender as chicken can be. The brown rice was very tender and not mushy like restaurant rice can become from sitting around too long. The other half of the bowl was the lettuce and diced tomato.   There isn’t much to say about that, it was clear it was there to cut down the rice portion to bring the calorie content down. I wound up making a trip to the salsa bar to pick out something to put on my Tropi-chop Lite because it just seemed dry compared to what I was accustomed to. I normally order black beans on my Tropi-chops to connect the other dry ingredients, and I think that’s what was lacking with this Lite version. The flavors were there and were all very good, but it lacked a connecting ingredient to make it feel like a Tropi-chop.   Thus, I wound up adding Cilantro-garlic sauce and probably ruined the “low calorie” idea, but it definitely improved the continuity of the dish.

My Lite Citrus Chicken Salad was absolutely delicious. The salad base was romaine lettuce which was covered with tangy, fresh orange wedges, chopped tomatoes, red onions, and grilled citrus chicken.   The dressing paired with this salad is a mango poppy seed dressing that I would voluntarily drink it is so good. (360 calories, $6.69) The manager told me that this salad was on a seasonal menu before with a few slight variations and they tweaked the ingredients to add to this permanent menu.     My favorite part of this salad was the combination of the mango poppy seed dressing with the oranges. They put a serious quantity of orange slices on this salad, it was at least a whole orange if not more. The dressing added just enough sweetness to the salad to balance out the acidity of the orange. The chicken was perfect just as it was in the Tropi-chop. The only thing that seemed a little overwhelming was the red onion. They were sliced long instead of diced small and it overpowered some bites of the salad. I would absolutely order this salad again and wish I could bottle that dressing to use at home.

The other three options on the new Lite menu include a Grilled Chicken Caesar wrap with a Caribbean Chicken Soup, a ¼ chicken with a half Citrus Salad, or a chicken breast with grilled vegetables, rice, and balsamic tomatoes.   I don’t think I would order the Lite Tropi-Chop bowl again personally, but I do understand its purpose and I’m sure there are people out there that will really enjoy the lighter version.   The Citrus Salad is definitely the highlight of the menu. Try it for a light lunch one day and I promise you won’t be disappointed.