The Magnificat Cafe is a quick service restaurant that has been downtown on the corner of Laura and Monroe Streets for the past thirteen years. The patio door opens right onto Hemming Park. Open weekdays for lunch, Chef Desclefs prepares a variety of quiches, soups, sandwiches, and salads from scratch every day. Most of the lunch options offered draw on Chef Desclefs upbringing in France. They’ll appear familiar to the average Jacksonville diner but at first bite you’ll know they’re a step up from the typical Jacksonville lunch fare. We’re here to tell you, if you haven’t been to the Magnificat, you’re missing out. 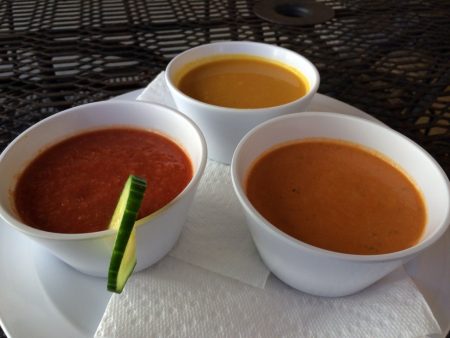 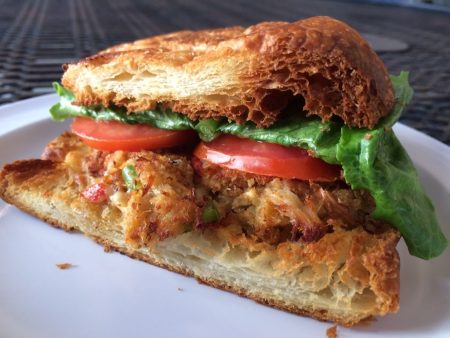 We started things off with the quiche. Let’s just be blunt….. This was the best quiche we have ever eaten! It was incredibly light and fluffy, like eating clouds made of egg. Interestingly, the texture of the egg in the quiche reminded us of the silky, smooth curdled egg we had eaten at Restaurant Doro a few months back. The curdled egg at Doro was made using a French preparation and Chef Desclefs at the Magnificat is from France and stays true to his culinary roots. One thing is for sure, the French can make some eggs! Truly we enjoyed the asparagus quiche with tangy goat cheese, and the crab and red pepper quiche with a generous amount of crab meat. Based on these we’re confident we would have enjoyed any of Chef Desclefs’ quiches. 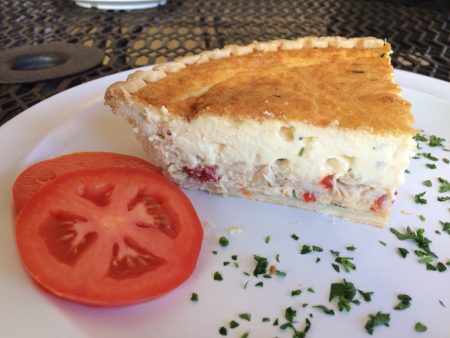 The two sandwiches- crab cake on a croissant and turkey with goat cheese, dried cranberries, and sage mayo- were fairly different options. The crab cake croissant was better than expected. The crab cake was fresh and made in house; it had excellent flavor. Aside from being offered on a croissant sandwich the crab cake is served on a salad, and also with eggs benedict. However you prefer your crab cake, we recommend giving it a try at the Magnificat. The turkey, goat cheese, cranberry, and sage mayo sandwich was served on a fresh, crispy baguette. The baguette was toasted and a touch overcrisp which made it a bit more difficult to eat than necessary. The sage mayo added an extra layer of flavor to this sandwich. I would order it again, maybe not toasted since a baguette is a firm bread to begin with. 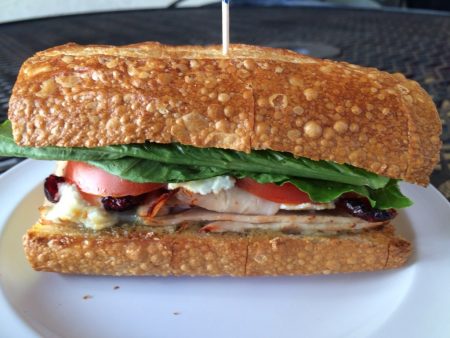 The soups are a don’t miss at the Magnificat. Chef Desclefs makes all the soups from scratch. The three we tried happened to be vegan, but you don’t have to be vegan to enjoy them. The first soup was the vegan cream of tomato and tarragon. The cream is made from soaked cashews. Pureeing soaked cashews makes a beautiful creamy texture which gave this soup a smooth thickness so we did not even miss the heavy cream that would usually be used. Really. Beyond the perfect texture, the flavor of the soup was perfectly balanced. It was not too acidic or salty, the tarragon was a beautiful compliment. The next soup we tried was the carrot ginger. We were pleasantly surprised at this soup. The carrot came through nicely with just a little bit of ginger. The ginger was present without being spicy or overpowering as it all too often is with carrot ginger soup. Both the cream of tomato and tarragon and the carrot ginger soups were vegan, but they were excellent; non-vegans will love them! The gazpacho we did not love as much as the other two soups. It had an excellent texture and was fairly smooth, however the cucumber came through a bit too strongly for our taste. It wasn’t a bad soup, it just wasn’t as great as the other two. 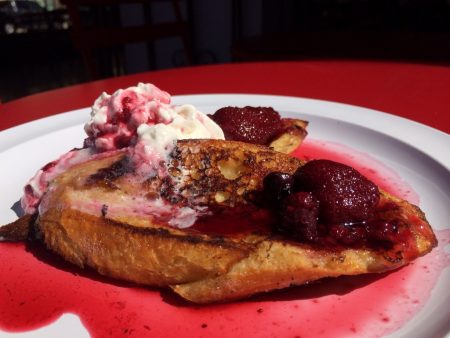 The final dish we tried was the pain perdue. Pain perdue is similar to french toast, but is made with thick slices of baguette and does not use cinnamon like American french toast typically does. Chef Desclefs’ pain perdue is topped with whipped cream and a light and slightly sweet strawberry sauce with large pieces of strawberries in it. 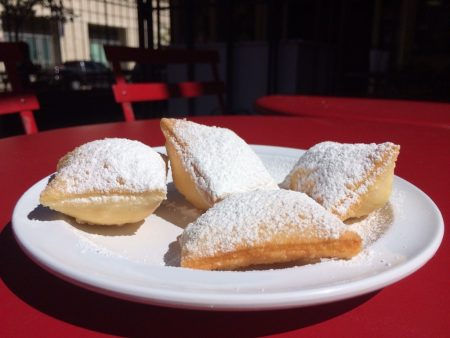 The thing that was true about all of the food we tried at Magnificat Cafe is everything was good without being heavy. You could eat any dish there and not feel stuffed or uncomfortable after finishing it. So often at restaurants the food is good, but it is good because it’s heavy. At the Magnificat the food is good because it’s wonderfully made. The ingredients are quality and the dishes are prepared well. If you’re looking to step up your lunch game The Magnificat Cafe is the spot to do it.